Will Smith is seen filming for the first time with his on-screen daughters who are portraying tennis superstars Venus and Serena Williams in the biopic King Richard.

The 51-year-old leading man looked ready to hit the tennis court, while sporting a hot pink shirt, red shorts and a salt and pepper beard, alongside actresses Saniyya Sidney, 13, and Demi Singleton, 12, on Friday in Los Angeles.

First look: Will Smith was seen filming for the first time with his on-screen daughters, Saniyya Sidney, 13, and Demi Singleton, 12, who are portraying tennis superstars Venus and Serena Williams on Friday in Los Angeles. Smith is playing the girls’ father in the biopic King Richard 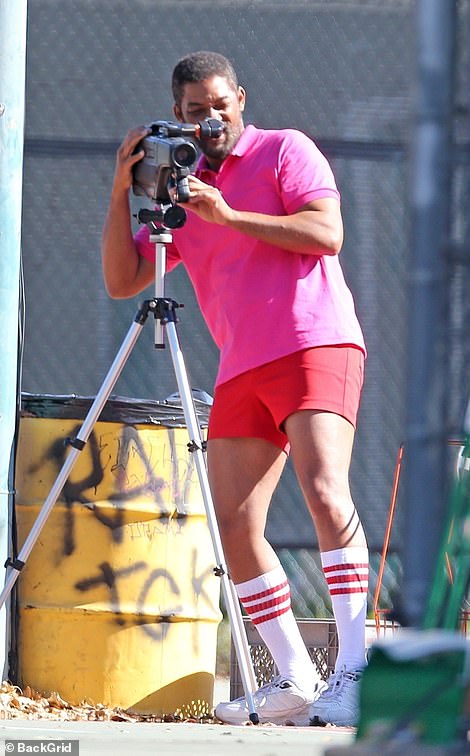 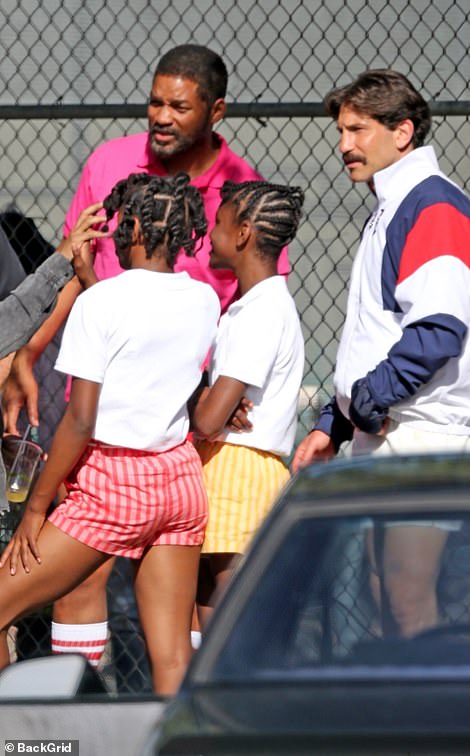 The Gemini Man star is producing the Reinaldo Marcus Green-directed film, set for a November release, and will star as the father who coached the legendary players to super stardom

The Gemini Man star is producing the Reinaldo Marcus Green-directed film, set for a November release, and will star as the father who coached the legendary players to super stardom.

While on set, Jada Pinkett Smith’s husband of 23 years could be seen jumping behind the camera and adjusting some framing in his red and white knee-high socks.

Like Smith, both of the teens beamed between takes, as they got familiar with a tennis racket and took direction. 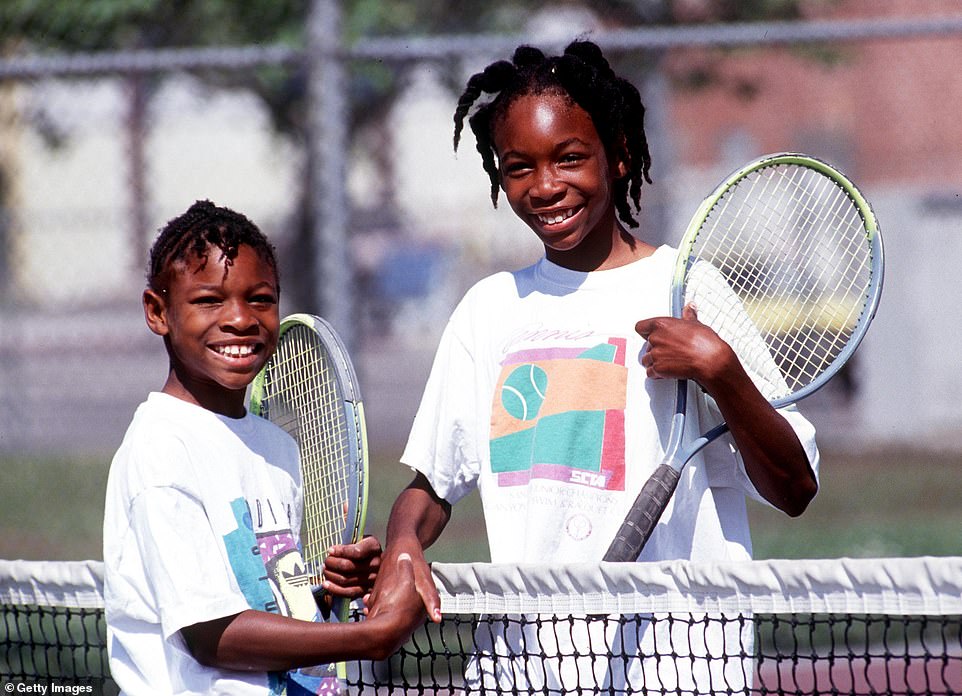 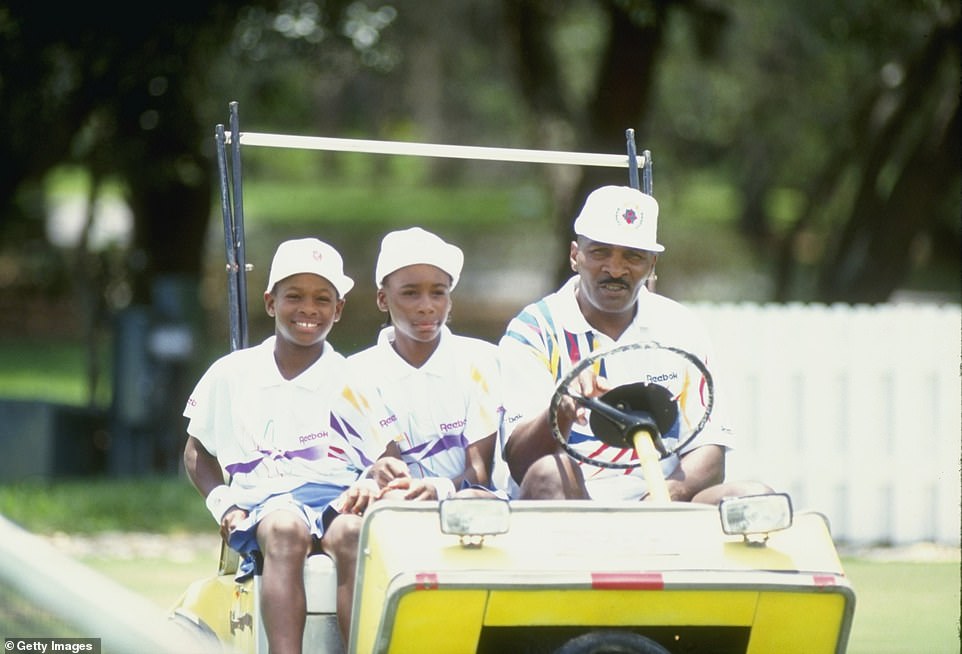 Training hard: The sisters are seen here taking a ride with their father at a tennis camp in Florida in 1992 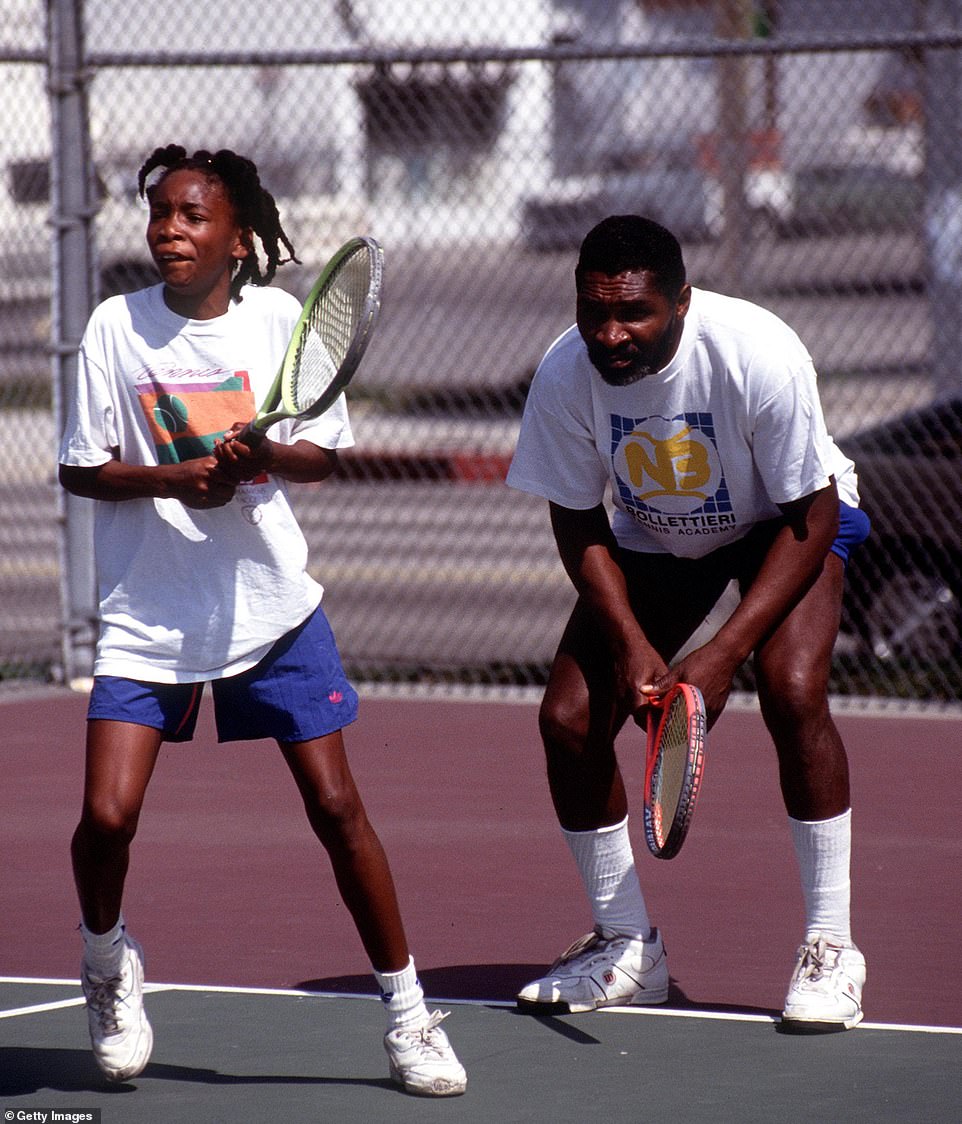 Raising legends: Richard Williams is pictured here with Venus in 1991

While on set Smith could be seen standing in front of a cart of tennis balls, in his vibrant ensemble.

Smith wore an intense expression on the court, which could have been a nod to the tennis dad’s push for his daughters to have a well-rounded physical and mental training schedule.

He appeared to be in character, as he displayed a range of emotions and exchanged smiles with The Walking Dead’s Jon Bernthal, playing the Williams’ coach Rick Macci. 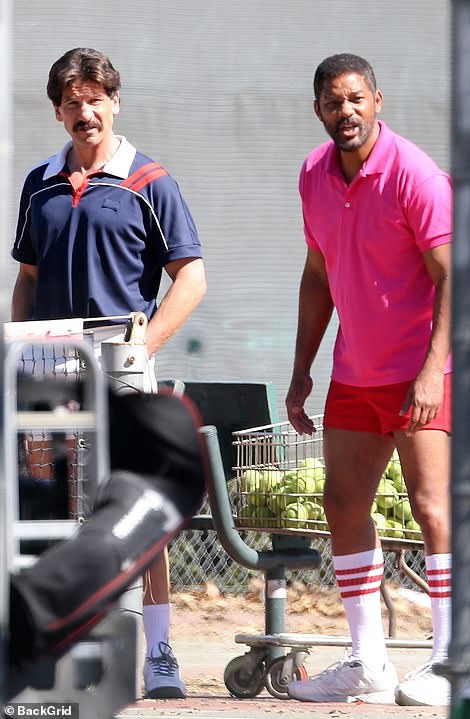 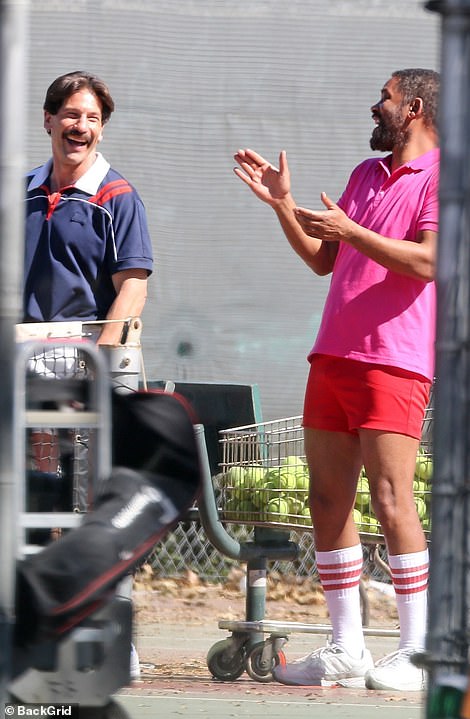 The young actresses, who bear a striking resemble to the sisters, appear to be loving their time on set.

‘Game on…I’m playing Venus Williams!!! With Will Smith as my Dad!!! One Love to my incredible team. Champions on the court,’ Sidney gushed on Instagram after it was reported she landed the role as Serena’s younger sister.

Singleton, who played Young Nala on Broad’s The Lion King, also took to the app to exclaim she was feeling ‘so honored and so grateful’ about her casting. 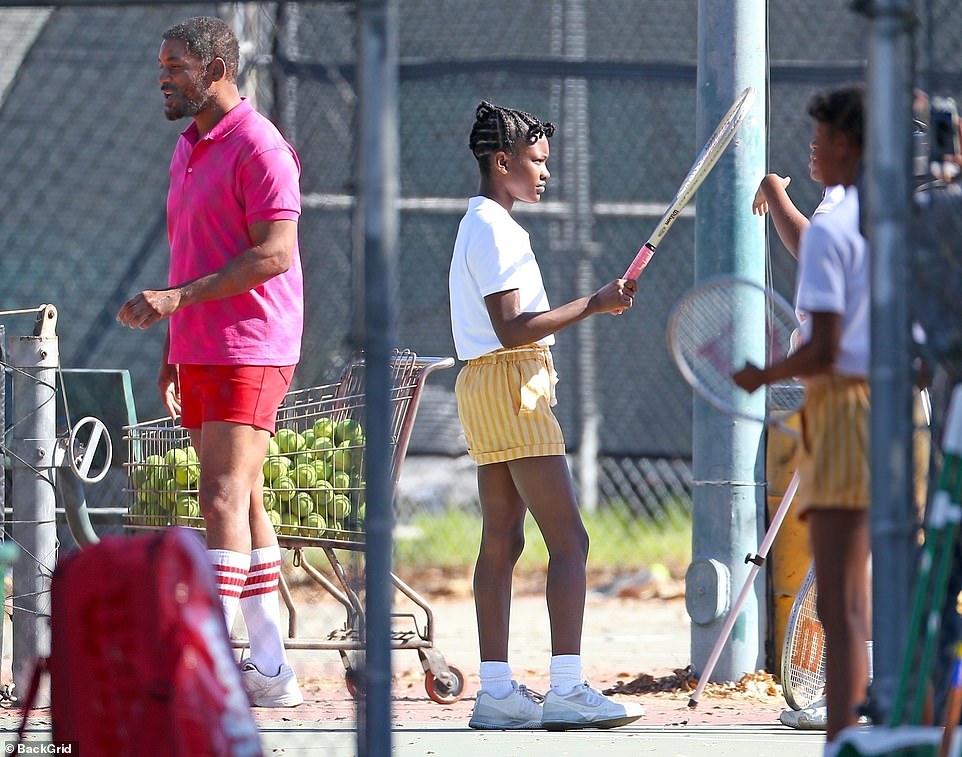 Seeing double: The young actresses, who bear a striking resemble to the sisters, appear to be loving their time with Smith 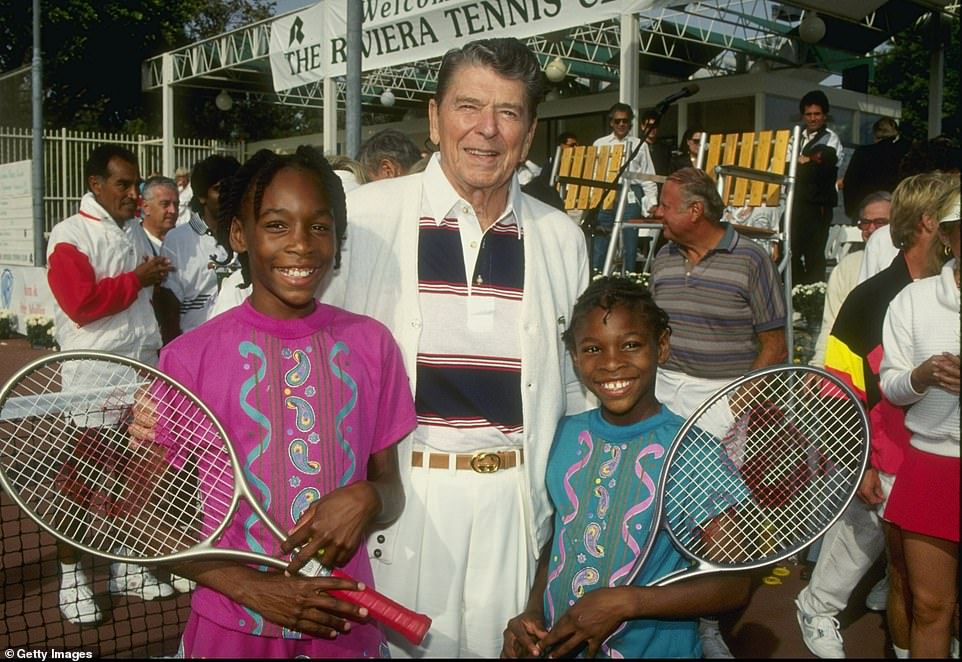 Success: Serena Williams and her sister Venus Williams even met president Ronald Reagan, as they gained fame for their natural skill

On Thursday, the cast rallied together to celebrate Singleton becoming a teenager.

The young actress shared two snaps on her Instagram Story of a Happy Birthday sign outside her trailer and a bunch of pink and rose gold balloons.

The American Horror Story actress beamed alongside the bouquet of balloons, which also included a giant 13 and stars. 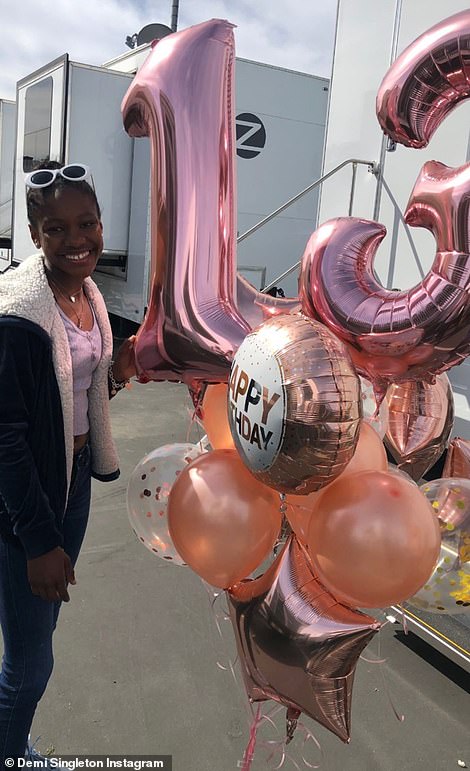 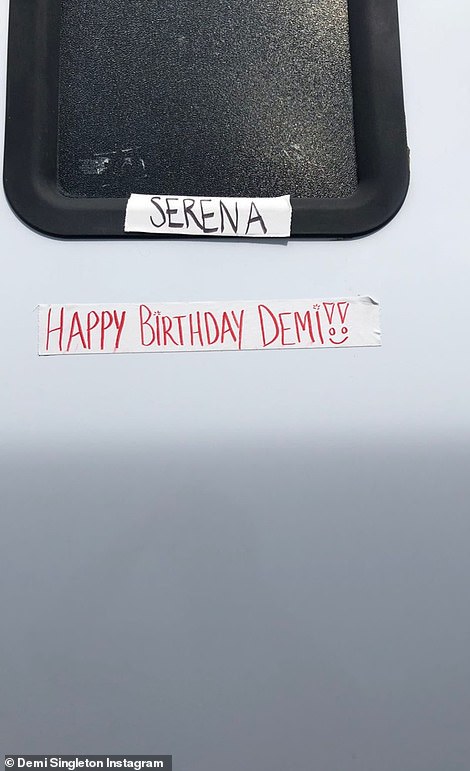 Best day: On Thursday, the cast rallied together to celebrate Singleton becoming a teenager

While Richard is now 78 years old and disabled following a series of strokes, he still enjoys a close relationship with his famous daughters and their seven half-siblings.

Richard was absent at Serena’s wedding in 2017 to Alexis Ohanian after he told her one hour before the ceremony that he didn’t feel able to escort her down the aisle on her wedding day.

‘He was in New Orleans, he had a suit, and I know he was really excited,’ she explained in the HBO documentary Being Serena. ‘But then he wrote me and said: “Serena, I don’t want you to be mad at me, but I just can’t walk you down the aisle. I’m not myself anymore. I’m just too nervous.”‘

Serena was understanding despite the last minute disappointment. While Richard, pictured in 2012, is now 78 years old and disabled following a series of strokes, he still enjoys a close relationship with his famous daughters and their seven half-siblings

‘Maybe a lot of daughters wouldn’t react the same way, but I know the struggles he’s had these last few years. His health is better now, but I know he still doesn’t feel like himself, doesn’t feel like he’s perfect,’ Serena said. ‘And if he doesn’t want to be up there in front of a lot of people, I completely understand. Look, when we first came on the scene, there were a lot of people who didn’t get him. I don’t think a lot of them wanted to get him. I don’t think a lot of him could have anyway.’

The movie will focus on Richard’s journey through controversy and hardship as well as his own past to coach and train his daughters.

After showing early promise, the home schooled sisters headed to West Palm Beach, Florida to attend Rick Macci’s tennis academy in 1991; Serena was 10 and Venus was 11.

In 1995, Richard pulled them out of the academy and returned to coaching them himself, leading them to Grand Slam titles a few years later and ultimately Olympic gold medals.