Thousands of post offices could disappear in the next two to three years as shops whose premises they share quit the high street as victims of a faltering economy.

Experts fear that up to 6,000 branches are vulnerable, meaning the 11,500-strong service could halve. The ailing network receives £50million a year from the Government to keep loss-making post offices open, but this is due to end in just over three years’ time.

The Government wants the Post Office to break even with a ‘sustainable’ model. Last year, it reported heavy losses of £597million.

Some 223 post offices closed in the year to March last year. A further 55 are closing as a result of the collapse of convenience store chain McColl’s, which owns newsagents Martin’s.

Supermarket chain Morrisons bought all 1,160 of McColl’s shops in a £190million rescue package, but to cut costs is closing 132 – 55 of which have in situ post offices. When these shops with post offices close, they leave some towns, such as Ware in Hertfordshire (see box), without a bank or post office.

Calum Greenhow, chief executive of the National Federation of SubPostmasters, says: ‘McColl’s is just the start. As we go into recession, other shops will close and with them will go the post office. I am afraid the post office network is going to wither on the vine.’

The crisis is in part a result of a £1.34billion Post Office ‘modernisation’ programme a decade ago. This saw more than 6,000 post offices put into the back of shops, run by the likes of McColl’s, Co-op, Ryman and WHSmith – as well as independent stores.

The majority of postmasters are self-employed small business owners – operating a ‘local’ post office within a shop. They pay the Post Office a franchise fee to use its branding and offer its postal services.

In return, the Post Office pays for equipment and training – and a small fee for every postal transaction. Major retailers such as WHSmith and Ryman host larger standalone ‘main post offices’ instore that are also run as franchise businesses.

Greenhow, a subpostmaster at West Linton post office in the Scottish Borders, says: ‘A decade ago, almost two thirds of my revenue came from post office services – with the rest from my gift and greeting cards store. Now, a quarter of the revenue is from the post office. If sales from the shop fall off a cliff as the economy goes into freefall, my business could hit the buffers.’

Andy Furey, of the Communication Workers Union, which represents 500 postmasters, says: ‘We are facing a ticking timebomb where thousands of post offices could close over the next few years as the franchise model is not enough to make a living from. As high street shops close, the post office side of the business will go, too, as they cannot be run without income from a shop.’

Chris Noice, of the Association of Convenience Stores, which represents 48,000 small shops of which 10,560 also have a post office, says: ‘The post office is not a big earner – but provides an essential service, increasing the number of customers coming into a store.

But as the bottom line is squeezed, with soaring inflation and rising energy costs, it means that shops could close – taking the post office with them.’ By 2030, nearly half of all high street shops trading today will have disappeared due to changing shopping habits, predicts research by courier ParcelHero.

In a further blow to the survival of post offices, Royal Mail is promoting a ‘parcel collect’ service that undercuts the prices of post offices. Customers are encouraged not to visit their post office, but instead get the postman to post mail for them by booking a postal collection online. Until the end of this year, Royal Mail is offering this service – which previously cost 72p per item – for free.

Although the price of sending letters is the same as at a post office, parcels are cheaper. For example, a 2kg first-class, medium-sized parcel costs £5.95 online with a postman picking it up, but if posted in a post office it will be £6.95. There is no need to print a label as the postman sticks one on when picking up the mail at the same time as other post is delivered to your home.

James Daley, managing director of the campaign group Fairer Finance, says: ‘The Royal Mail initiative takes business away from post offices and makes it harder for them to survive.’

So far this year, 617 bank branches have closed or been put on notice of shutting. From next April, HSBC will shut 114 branches. Derek French, founder of the now disbanded Campaign for Community Banking Services, says: ‘We now have 100 major communities with no high street bank. As a result, the post office is the last place left for many people and small businesses in these communities to do their banking.’

He adds: ‘I fear many post offices located in stores will struggle to survive as the decline in high street shopping continues. If a shop goes, the post office will go with it.’

Banks have promoted ‘banking hubs’ as a possible solution to the decline in the number of banks and post offices on the high street.

Run by the Post Office, bank representatives will be at the hubs on selected days to provide a oneto-one service to customers.

But despite all the fanfare that these hubs have created, just three have opened so far – Rochford in Essex, Cambuslang in South Lanarkshire and most recently one in Brixham, Devon. A further 26 hubs are promised.

Two decades ago, there were 18,400 post offices. In 2003, an ‘urban reinvention programme’ axed 3,000. A further ‘network change programme’ was introduced four years later that put the sword to another 2,500.

The Post Office said: ‘We are saddened by the closure of some McColl’s stores which run post office counter services – while recognising the difficult high street conditions being faced by many retailers.

‘Our intention to become a self-sustaining business remains our objective. We need to accept this may take longer than intended.’

Want to switch to  a better bank? Read our Five of the best bank accounts guide

The bustling market town of Ware in Hertfordshire lost the last of its six high street banks a couple of years ago – as reported at the time by The Mail on Sunday.

Next month its post office also shuts. The town, with a population of 19,000, is in shock over its imminent closure. Shops along the high street have plastered their windows with ‘Save our Ware post office’ posters, imploring locals to sign a petition demanding the post office is kept. But despite more than 3,000 signatories, local MP Julie Marson has been told it will still shut.

The Conservative MP for Hertford and Stortford says: ‘The post office filled the void created by the closure of the banks – and I utterly condemn this kick in the teeth to residents.’ 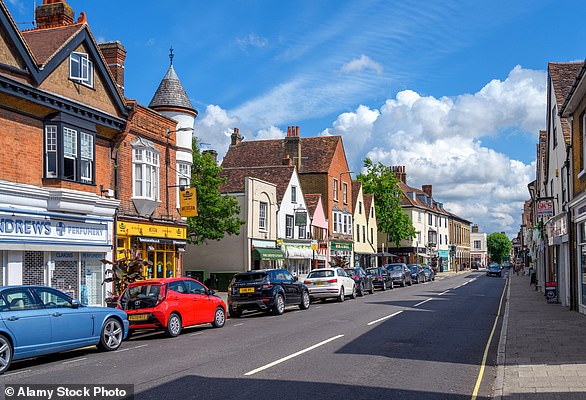 Ware, with a population of 19,000, is in shock over the post office’s imminent closure

Two of the five post office counters at the back of the Martin’s newsagent on the high street are open. The walls are lined with red and silver tinsel in preparation for a Christmas rush – but there is little festive cheer from staff who fear they will be out of work in the New Year. Afton French, a 37-year- old mother of six, says: ‘What will I do when the post office closes? Cry? It is such a lifeline for people like me who rely on the vital service it offers in the community.’

Afton uses the post office to top up the pay-as-you-go card for her electricity meter.

Sue Marx, 67, says: ‘The post office and banks need to have their heads knocked together by the Government to sort out this terrible mess.

‘The elderly and vulnerable that rely on face-to-face banking services are being abandoned. They do not want to bank online. As a long-time Lloyds customer I feel betrayed.’

Across the road from the doomed post office is clothes shop Sparkles of Ware. Owner Wendy Smith says: ‘Post offices in nearby villages have closed in recent years – forcing more people to rely on the branch inside Martin’s in town.

‘Trade suffered when the banks all quit. Now, with the post office going, it will get worse. It makes running a business like ours extremely challenging.’

On Friday, Julie Marson MP said she was ‘hopeful’ a new home for a post office in Ware could be found.