EXPRESS INFORMER > News & Politics > Will Portugal and Denmark be next on the quarantine list?

Will Portugal and Denmark be next on the quarantine list? Decision on border restrictions TODAY after cases spike as Theresa May demands ministers stop ‘dragging their feet’ over airport tests

Portugal and Denmark are on the verge of being added to the UK’s quarantine list after a surge in cases.

Transport Secretary Grant Shapps is preparing to update the ‘red’ list of locations from where arrivals face 14 days of self-isolation.

He fueled speculation that Portugal will be stripped of its exemption this morning, saying that he was considering whether the country’s islands could be treated separately.

The Government has said it is basing decisions largely on the cumulative number of cases over seven days, per 100,000 of population.

Portugal was spared by England last week despite having risen consistently over the trigger point, with Mr Shapps arguing that the proportion of positive tests was still relatively low and there was just more screening going on.

Meanwhile, Theresa May today joined calls for ministers to back the introduction of testing on arrival at airports as she said it ‘has to be the way forward’ so that quarantine rules can be eased.

The former prime minister said ‘at the moment airports aren’t even permitted to trial tests on passengers’ as she demanded that change as soon as possible and argued ‘far from leading the world, the UK is lagging behind’.

Mrs May also suggested that the Government is split on the issue. She said the Department for Transport ‘gets this’ but Number 10, the Treasury and other departments do not.

She said her message to the Government is ‘if you want to get the economy moving, get planes flying again’.

‘If you want to get planes flying again, give our airports permission to trial tests,’ she said.

‘Stop the UK dragging its feet, let’s lead the world and set the standard to restore world travel and world trade.’

Ministers have been reluctant to back airport testing despite intense lobbying from the aviation industry because they fear too many infectious returning travellers could be missed at the border.

Portugal was spared by England last week despite having risen consistently over the trigger point for quarantine measures, and has spike again since 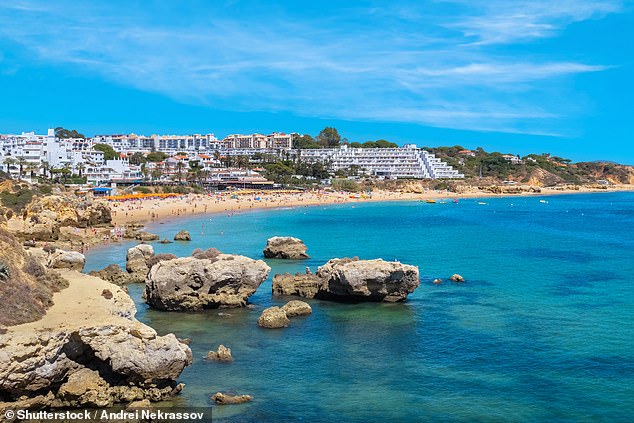 Grant Shapps fueled speculation that Portugal (pictured, the Algarve) will be stripped of its exemption this morning, saying that he was considering whether the country’s islands could treated separately

However, Scotland and Wales did impose restrictions.

And since then Portugal’s case rate has risen even higher, to 28.

Denmark is also considered in the danger zone with 21.9 infections per 100,000 people over the past week.

Some holiday islands, such as Sardinia, are also thought to be on the edge of restrictions.

Greece continues to have an overall low incidence of cases, even though many of its islands have been subjected to self-isolation rules.

Ironically, due to the recent surge in infections the UK is now above its own quarantine threshold, with 24.8 cases per 100,000 people.

In a round of interviews this morning, Mr Shapps declined to be drawn on any changes, saying he would ‘wait for the latest scientific evidence from the Joint Biosecurity Centre’ and an announcement will come later.

But he pointed out that the UK now treats some islands separately from the mainland.

‘We will be able to look at islands in other places, notably the Portuguese and Spanish islands,’ he said.

‘So we’ve been able to, with Greece for example, not to exclude the whole of Greece, but remove seven islands.’ 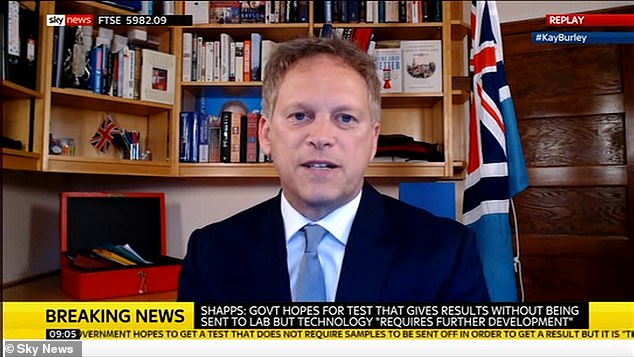 In a round of interviews this morning, Mr Shapps declined to be drawn on any changes, saying he would ‘wait for the latest scientific evidence from the Joint Biosecurity Centre’

St Vincent and The Grenadines