UK inflation could be 3 percentage points higher next year after the Government’s U-turn on two-year support for energy bills, according to analysis by ING.

It said the typical household could be spending 10 per cent of its disposable income on energy in 2023, though this could be more than 15 per cent if natural gas prices spiked back to the highs reached in August 2022.

If the energy cap had remained, this would be about 8 per cent – although the poorest households would have been paying 25 per cent with the cap and are likely to be paying close to 40 per cent without it.

If prices spiked back to August levels, the bank said this could exceed 60 per cent of their disposable income.

Inflation impact: Bank ING has suggested the removal of the £2,500 energy bill limit could drive up inflation from April

Newly appointed Chancellor Jeremy Hunt announced yesterday the £2,500 cap on the average household’s bills, put in place last month, would be scrapped in April 2023, though support may continue for some.

The Government initially pledged the cap would stay in place for two years, meaning energy bills are now likely to be substantially higher than households had planned for from April.

Households not on fixed contracts who don’t qualify for future support will once again be subject to Ofgem’s price cap.

Energy forecasters are predicting that this could be up to £5,000 per year, again based on typical usage.

Higher energy bills have been a significant contributor to the rising inflation which has hit the UK economy in recent months, and ING has predicted that removing the Government cap would increase Consumer Price Index Inflation 3 percentage points above where it would have been in 2023.

It shows inflation coming down from its current level of around 10 per cent around March, but spiking again in April as Ofgem raises its price cap. ING has predicted that the new cap will be £4,250.

>>  How does raising the base rate help combat inflation driven up by energy prices? 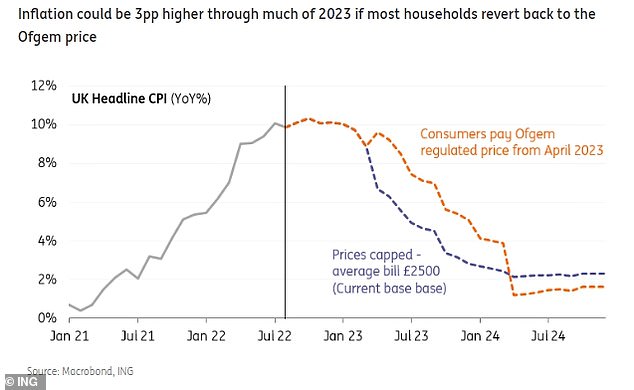 ING’s forecast: Inflation could stay 3bps higher than previously expected for most of 2023, if energy customers went back to paying the Ofgem price cap 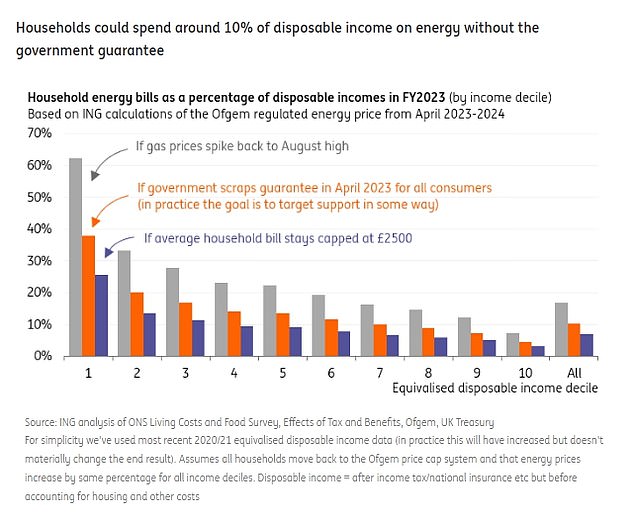 Energy spend: ING forecasts that the average home will spend around 10% of its disposable income on energy in 2023. Number 1 represents homes with the least disposable income, and 10 the most

By July for example it could be sitting at around 8 per cent, compared to 5 per cent if the Government’s bills cap had remained in place. It forecasts the gap would not close again until around April 2024.

James Smith, developed markets economist at ING, said in the report: ‘That kind of hit to disposable incomes would inevitably deepen what would otherwise hopefully be a reasonably mild recession this winter.

‘The Chancellor will be hoping that energy prices continue to fall, lessening the blow to households.

‘Indeed for now his focus is on reducing the OBR’s borrowing estimates as much as possible in its forecast due on 31 October.

‘He’ll also be hoping a scaled-back support package will reduce the need for the Bank of England to tighten aggressively.

‘But in practice – and especially if gas prices start rising again – we think the Treasury may well need to offer extra support in one form or another before April next year.

‘For the time being though, the moves by the Chancellor will reduce the need for the Bank of England to act as aggressively. Having pencilled in a 100 basis-point rate hike in November, we now think that’s more likely to be 75bp.’

The average unit price for dual fuel customers on standard variable tariffs paying by direct debit has been limited to 34p/kWh for electricity and 10.3p/kWh for gas, inclusive of VAT, from this month.

These are average unit prices and it can vary slightly by region.

Under the energy price guarantee, some households saw bills cut while others saw them rise: 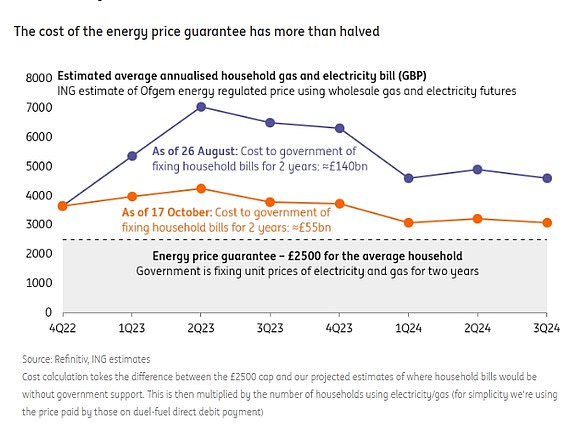 What could have been: ING has looked at the potential cost of bills, based on forecast energy prices in August and now

What will happen to bills after April?

The Government’s energy support scheme is set to be ‘reviewed’ by the Treasury, according to Hunt.

It is not clear what will happen after April, but it has been suggested that the state bill subsidy could then become means-tested.

Smith said: ‘At present, the Government only really has two ways to means-test its energy price cap.

‘The most obvious option is to offer all households the same energy price but to temporarily raise higher rates of income tax to make the system fairer.

‘That would probably be the most accurate and therefore cost-effective option, but would most likely be politically untenable.

What will the Ofgem price cap be in April 2023?

Predictions from analysts are as follows:

‘The alternative would simply differentiate between those on Universal Credit (welfare benefits) – around 15-20 per cent of energy-using households – and those that aren’t.’

Prior to the announcement of the existing £2,500 limit for average usage, bills for those not on fixed contracts were in line with the energy price cap set by industry watchdog Ofgem.

The Government’s cap would therefore have saved customers typically around £1,000 on what they would have otherwise paid.

Ofgem is set to review its price cap once again in April 2023.

Analysts have made various predictions about what the cap might be, based on the current and predicted future price of wholesale gas.

Energy consultancy Auxilione has calculated that the cap could hit £5,000 for a typical household, though it said the Government will ‘likely review the price cap before we get there’.

Energy analyst Cornwall Insight has set its figure at £4,348, though it anticipates that the cap could go down after that.

In September 2021, the Ofgem cap was £1,277 – meaning that even under the Government cap, the energy bill of the average household outside of a fixed deal had doubled in the space of a year.