The gold price almost touched its record high of $2,075 after the Russia-Ukraine war broke out and is now in a tug of war between opposing forces, say financial experts.

The US Federal Reserve has started hiking interest rates which has dampened demand for gold, but inflation and the uncertainty roiling stock markets are nevertheless supporting the price for now, according to gold market watchers.

Gold was trading at around $1,840 this week, off its most recent peak of $2,070 in early March when it nearly topped the all-time record set during the pandemic in summer 2020.

Below, we look at recent gold market trends and whether inflation and other shocks will propel the price back above $2,000 and beyond. Or, if central banks’ determination to curb inflation via interest rate rises will keep gold in check.

‘Gold prices have recently slipped to trade little changed from three months ago, because the precious metal is currently caught between two opposing forces,’ says Adrian Ash, director of research at BullionVault.

‘Because gold pays no income, rising interest rates should hit like kryptonite hits Superman, sapping its strength as investors switch instead to cash or fixed-income bonds for better returns.

‘Against that headwind however, bullion is getting a strong boost both from inflation – which is making a joke of 1 per cent interest rates from the Bank of England and US Fed – and from the uncertainty which inflation and rising interest rates are creating in the stock market.’

Ash adds that while some investors buy gold as crisis insurance for short-term shocks, it tends to do best when share prices keep falling year after year.

‘Right about now is when gold “should” be doing what people expect from it: to shine and do so brightly,’ says Fawad Razaqzada, market analyst at City Index.

‘Until now, the metal has been unable to find much demand from inflation hedging or flight from riskier stock markets.’ 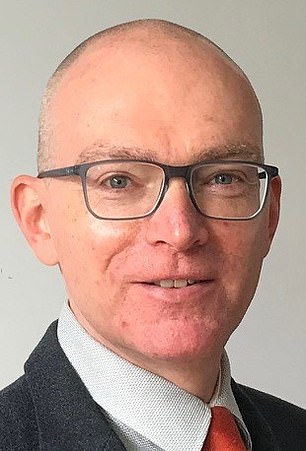 He reckons that is partly because investors have until now been piling into the dollar, something which weighs on the gold price.

This is because it is denominated in the US currency, so when the dollar is strong it can price out overseas buyers.

‘The precious metal has also been held back all this time due to rising bond yields, making this non-interest-bearing commodity less appealing for yield seekers,’ he notes.

‘But yields have dropped sharply as investors piled back into the perceived safety of government bonds.’

Razaqzada says it is not uncommon for gold to fall alongside equities when markets are in turmoil, as in early 2020 for example.

But he says that given elevated levels of uncertainty there is a good chance we will see more demand for gold as a safe haven asset going forward.

Tom Price, commodities analyst at Liberum, says: ‘Since Russia’s war began in February, gold’s price has slipped 9 per cent from its initial spike.

‘Investor feedback tells us that gold bugs out there are frustrated by this fall. Why?

‘It’s the US Fed’s fault. Its undaunted hawkish monetary policy shift since last March trumps all other drivers.

‘Our view? Yes, gold’s price has fallen – as the Fed engages – but we are quietly amazed that it’s holding to that signal’s very tight post-lockdown range. In fact, gold’s still doing a good job of protecting the capital of its die-hard investors.’ 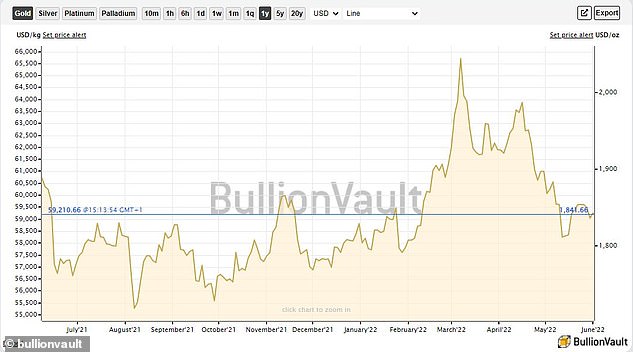 What typically drives the gold price?

Investors see gold as a store of wealth and hedge against inflation, as well as a safe haven asset during financial and political upsets.

Interest rate cuts, or quantitative easing – money printing – particularly in the US, make gold more attractive to investors as this weakens the dollar and can fuel inflation.

However, the US Federal Reserve is currently raising rates, though so far this has not had a significant impact on rising inflation caused by supply shocks.

Demand for ‘physical gold’, including coins and bars, can be driven by different factors. For example, the festival of Diwali is a popular time to buy gold jewellery in India.

But even when such demand is strong, it can be offset by volatility in ‘paper gold’, in the form of exchange-traded funds, held by institutional players like banks and hedge funds.

Meanwhile, a strong dollar as we are seeing at present makes gold more expensive and can this can deter all types of buyers.

And as, like gold, the dollar is considered a safe haven in times of trouble, which causes it to strengthen, these two trading trends sometimes work against each other.

>> How to invest in gold: Read our guide here

Two decades of gold prices in dollars: Previous dollar record in 2011 was surpassed in August 2020 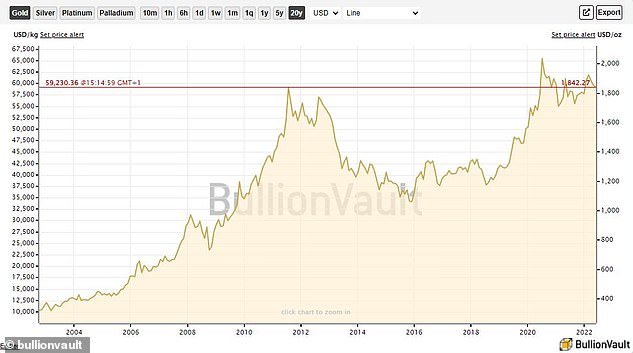 Fifty amazing golden scrolls, books, pictures and other artworks are currently on display at the British Library in London.

Some of the objects, drawn from own its collection, are being shown to the public for the first time in the ‘Gold’ exhibition, which is being supported by investment platform BullionVault. 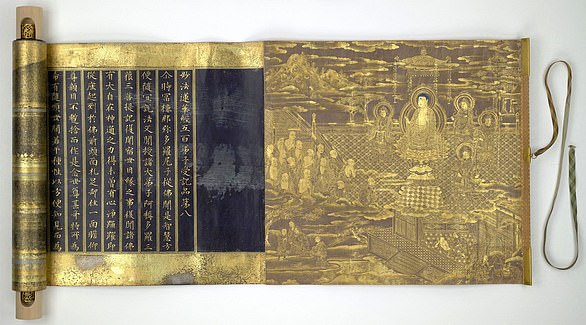 A rare copy of the Lotus Sutra in a lavishly decorated scroll with gold and silver ink, Japan c 1636, one of the most popular and influential texts of Mahayana Buddhism

Eleanor Jackson, curator of illuminated manuscripts and a co-curator for the Gold exhibition, says: ‘For centuries, gold has been fundamental to makers across the world for embellishing the written word.

‘Reflecting the international appeal of gold, this exhibition takes visitors on a journey across twenty countries via some of the most precious and intricately crafted items in our collection. 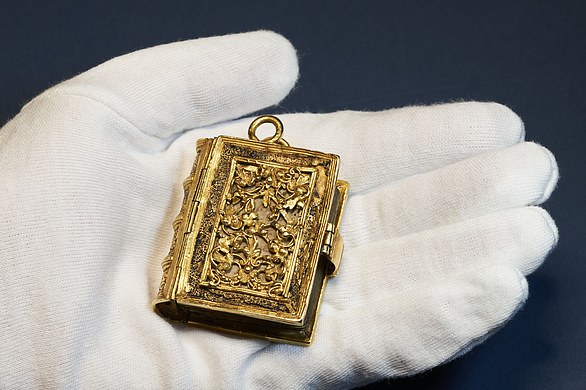 A tiny girdle book with a gold binding, England c 1540, from the Tudor court of King Henry VIII

‘Many of these objects were originally owned by royalty, and they would have been seen by only a select few. We are so pleased to be able to bring them together on public display for everyone to enjoy.’

What I learned at the new exhibition…

– The whole world is obsessed with gold, as books, manuscripts and artworks from many countries, cultures and time periods were decorated with the precious metal.

– All kinds of documents are illustrated in gold, including sacred texts from major religions but also official documents and treaties, and ostentatious gifts.

– There are two main ways gold is used to illustrate documents, by mixing it into a powder to write or draw with and by laying gold leaf on the pages. 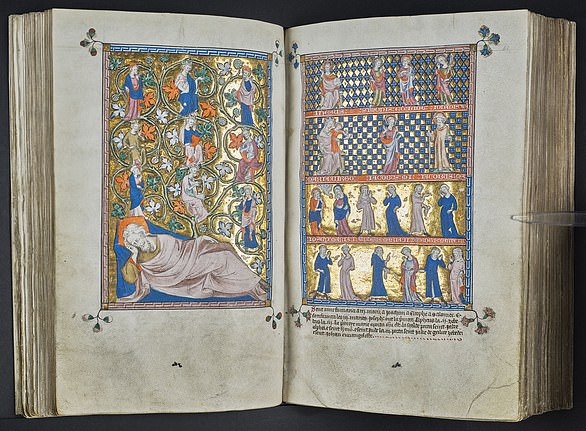 The Queen Mary Psalter, from London in the early 14th century, one of the most extensively illustrated biblical manuscripts ever produced

– Monarchs and rich people throughout history have commissioned or acquired objects lavishly decorated with gold mostly to show off, but let’s not carp about their motives because they have left us so much beautiful art.

The British Library’s ‘Gold’ exhibition is open now and runs until 2 October. Tickets are £8. 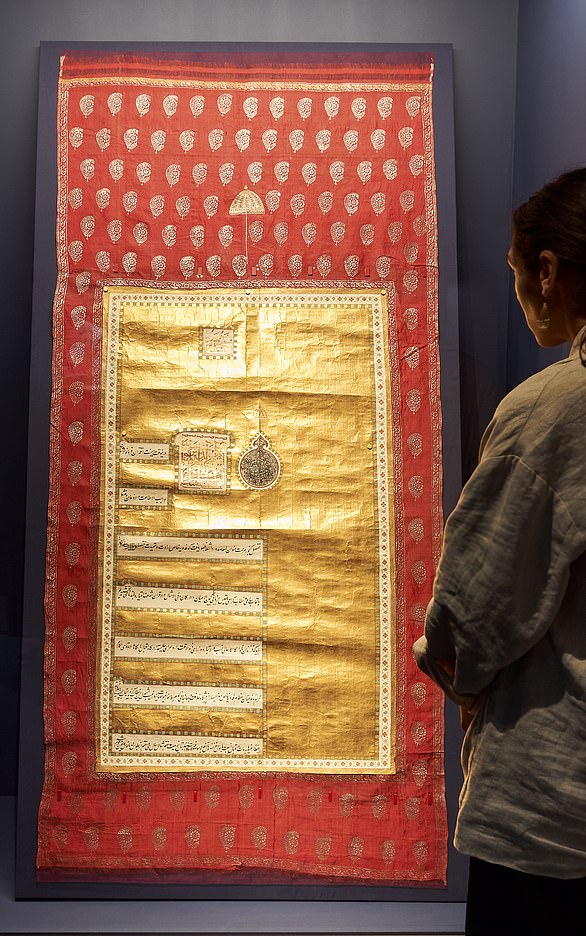