Will EU ban holidays by Britons? Tourists could be barred from summer hotspots on the Continent as Eurocrats threaten to keep borders closed

By James Franey For The Daily Mail

British tourists could be banned from holidays on the Continent this summer as Eurocrats threaten to keep EU borders closed.

The hopes of millions of Britons hang in the balance ahead of a meeting tomorrow when the EU’s leaders will push to keep lockdown restrictions in place.

Boris Johnson said on Monday that May 17 is the earliest that Britons could be allowed to go on holidays abroad.

PM Boris Johnson said Britons may be able to leave the country on holiday from May 17, though much of Europe may prevent people from travelling as they tackle the ongoing Covid-19 pandemic 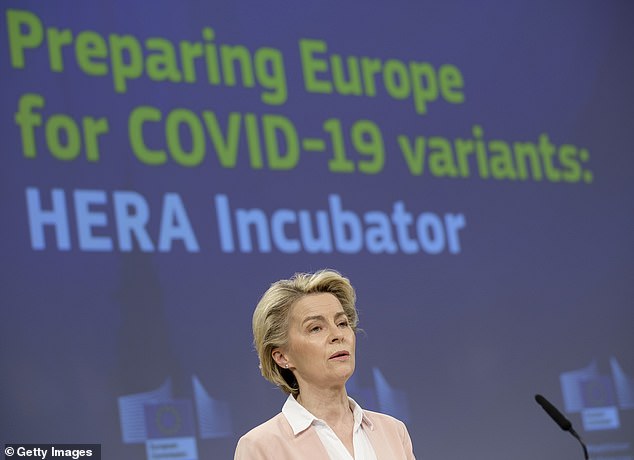 But the EU’s botched vaccine rollout has left Europe languishing behind the UK and facing months before lockdowns can be lifted. Infections remain high across most of the bloc.

Overall the EU has vaccinated only 6 per cent of its population, while the UK has reached one in three adults, with 18million people having received at least one dose. European leaders are meeting tomorrow for talks via videolink to discuss their ongoing response to the pandemic.

And the 27 governments will say in a joint statement, seen by the Daily Mail, that the situation is still too serious to ease restrictions on travel from outside the EU.

‘We must therefore uphold tight restrictions while stepping up efforts to accelerate the provision of vaccines. For the time being, non-essential travel needs to be restricted.

‘We need to accelerate the authorisation, production and distribution of vaccines in the weeks and months to come.’ Eurocrats have agreed on a ‘safe’ list of countries from where non-essential travel to the EU is allowed. It currently includes Australia, New Zealand, Singapore, Thailand, and South Korea, but not Britain.

‘The level of coronavirus incidents are still too high in Britain for it to be considered to be included on that list,’ an EU diplomat said.

A French government source told the Mail that it was too early to say if British tourists would be able to travel to France this summer.

But the ultimate decision on borders rest with individual countries and some have already broken ranks with the recommendation.

Greece and Cyprus have struck travel corridor deals with Israel after its successful vaccination drive.

And Spain’s tourism minister, Reyes Maroto, has been talking up vaccine passports to get Britons back to its beaches.

EU leaders will express their anger at European Commission president Ursula von der Leyen and the EU executive over the handling of its jab procurement scheme.

Hungarian prime minister Viktor Orban said it was a ‘bad decision’ to hand over responsibility for buying vaccines to Eurocrats. ‘We’ve sought to do something together that we could have managed more successfully on an individual basis – take a look at Britain,’ he added.

German MEP Gunnar Beck said: ‘Europe will be locked down until Christmas if this farce continues.’