No I-DEER! Wildlife photographer is clueless stag has crept up behind him as he tries to capture the perfect shot at London park

It takes a mighty long time to get a decent wildlife shot and even longer for a cracking one.

And this is a breath-taking image that any wildlife photographer would be delighted to capture: a magnificent stag stood frozen-still among a thick carpet of ferns for one magical split-second moment.

But apparently oblivious to the picture opportunity just a few feet away, this unfortunate amateur snapper had his long lens camera pointing entirely in the wrong direction in Bushy Park, west London.

Psst…….I’m right behind you! This unfortunate amateur snapper had his long lens camera pointing entirely in the wrong direction in Bushy Park, west London

The blissfully unaware photographer must now be kicking himself for missing the money shot while being too engrossed in taking a perfect photo in the far distance on Wednesday.

The astonishing moment was captured by another keen wildlife photographer, Roger Clark, 75, who was hoping for pictures of the red deer during their breeding season, during which there are frequent displays of rutting.

Roger said: ‘We hadn’t covered the red deer breeding season this year and with rutting continuing we through we would try our luck.’ 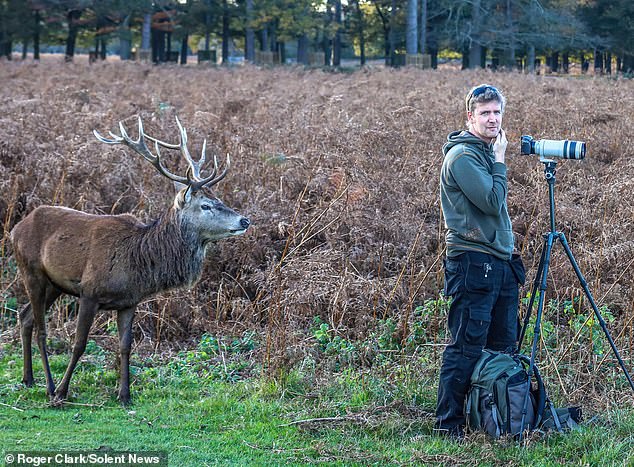 What’s the problem? Any wildlife photographer would be delighted to capture this magical moment but this one is clueless as to what is going on right behind him

‘We spotted a man with a camera mounted on a tripod intently focused on some deer activity in the ferns in front of him unaware of the large animal behind him.

‘Given the angle I was positioned, it looked like the stag was nuzzled up to pick a pocket from his jeans so I took a photo as it looked comical.

‘But it was quite bizarre that a wild animal would be so close without being noticed.

‘A few seconds later the deer backed off and with those large beautiful shiny eyes seemed to look at the photographer and say ‘your model is right behind you! Am I not good enough for you?’

‘The photographer never did realise the opportunity he missed and the red deer and I collectively gave up and wandered off in different directions.’