A teenage driver trying to impress other motorists at a car meetup has crashed his V8 Commodore into another car while attempting a burnout.

The crash occurred on Sunday afternoon at Bastion point Near Auckland’s Mission Bar, a popular meetup spot for car enthusiasts.

The teenage driver of the black Commodore can be seen trying to impress other attendees of the meetup by revving his engine before doing a burnout down a narrow road.

The driver then loses control of his car, swerving to both sides of the road before crashing into a white BMW and Toyota MR2

The teenage driver lost control of his V8 Holden Commodore, crashing into one car and damaging another.

The car enthusiast who took the video of the crash, Scott Atkinson, told The Daily Mail, ‘The Holden driver did not care. He got out of his car, chuckling.’

‘He took a pic [photo] of him on top of his car, called a tow truck and left. No apologies, only insurance information swapped.’

A second video posted after the crash shows the destruction the teenager left behind.

‘No! No! No! My dream car,’ the owner of the red Toyota MR2 can be heard shouting, his hands on his knees in disbelief.

In an interview with the New Zealand Herald, the owner of the white BMW expressed his disappointment in the damage to his car, but was also glad there were no major injuries.

‘Yeah s**t happens, it’s a terrible thing that happened, but honestly, it’s a car, it can be replaced. I’m just glad no one was hurt,’ he said.

His car is now entirely written off. 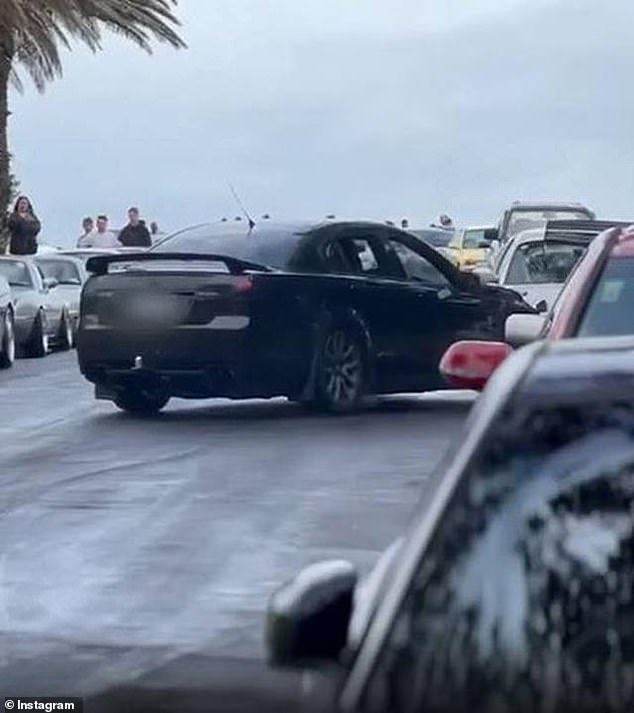 ‘This behaviour is common in our car community and is highly frowned upon, we hate when people do it,’ Atkinson said.

‘Both [cars] smashed up just because of some reckless driver trying to show off to his mates.’

Other car enthusiasts took to social media to voice their opinions, one writing: ‘Sad that when people don’t follow car meet rules, someone else always pays for another’s stupidity.’

Another said, ‘This is why the rest of us hate wannabe boy racers.’