A former paramedic has shared his heartbreak after his wife died in his arms during a 90-minute wait for an ambulance.

Nigel Mitchell, of County Durham, had been married to Gill for more than four decades when she suffered a fatal cardiac arrest in October last year.

A paramedic of 32 years, Mr Mitchell knew his wife was classified as a category one call, the most serious type of medical emergency, where help is needed in minutes.

But a 999 call handler told him he faced a wait of an hour-and-a-half for paramedics from his old employer, North East Ambulance Service (NEAS), to arrive.

Despite Mr Mitchell’s best efforts, which included driving his wife to the nearest community defibrillator and attempting to restart her heart, Gill died.

Mr Mitchell had been a campaigner and fundraiser for better access to emergency care in his and other rural areas for years.

His story comes amid a crisis within the ambulance services in England, with paramedics continually unable to meet emergency response time targets.

Mr Mitchell said: ‘I am not saying that the outcome would have been any different but if they had an ambulance in Middleton, or Barnard Castle, at least we would have known that she had the best possible chance,’ he said.

Former paramedic, Nigel Mitchell, was told his wife Gill faced a 90 minute wait for ambulance after she suffered a heart attack in October last year. Mr Mitchell pictured here at a memorial to his wife at their farm in Middleton-in-Teesdale 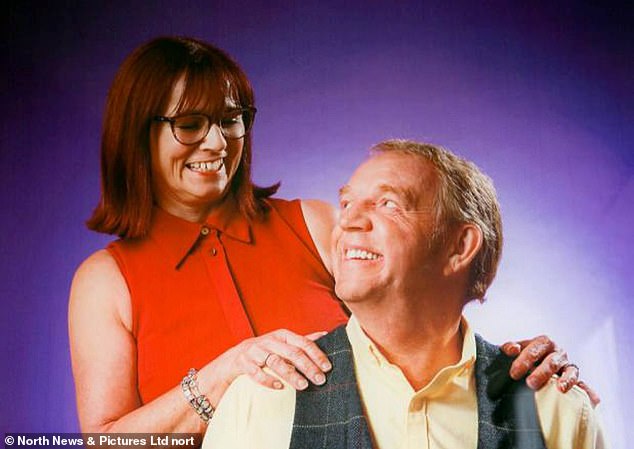 Mr and Mrs Mitchell were married 43 years. Despite the former paramedics best efforts while waiting for help, she died shortly after a heart attack

‘I laid her on the floor in the recovery position.’

After the 999 call and knowing his wife did not have 90 minutes, he bundled her into his car and drove from their farm, on the outskirts of Middleton-in-Teesdale, to the village’s defibrillator.

An NHS ambulance service misled coroners by changing documents and witness statements about deaths linked to how it treated patients, it has been reported.

North East Ambulance Service (NEAS) has been accused of doctoring multiple reports and keeping families in the dark about exactly how their loved ones died.

It is claimed that coroners were not given key evidence and that senior managers at the service edited witness statements that had been requested, in some cases making it look like no mistakes had been made.

According to The Sunday Times, whistleblowers say this could have happened in as many as 90 cases in the last three years, with the whistleblowers offered non-disclosure agreements worth more than £40,000 by the trust.

Whistleblowers say that despite a report by auditing firm AuditOne, which was done in 2020 and shared with the chief executive of the trust and other senior staff, the problem remains.

The report, which took 30 cases from 2019 to February 2020, and looked at six in depth, found NEAS was not handing over documents to the coroner properly.

Ironically, this defibrillator was installed on the back of successful campaigning by Mr Mitchell for better access to emergency care in 2010.

‘By the time we had got the defib she had stopped breathing,’ he said.

‘She was on the pavement and a passer-by who was on holiday from either Belgium or Germany stopped to help.’

He recalled how he and the stranger tried repeatedly to keep Gill alive before the emergency services finally arrived.

‘He was doing CPR and I got the defib and shocked Gill five or six times while other people were calling the ambulance again,’ he said.

By then four ambulances and an emergency helicopter had arrived and Mrs Mitchell was airlifted to James Cook Memorial Hospital in Middlesbrough.

However, by the time she arrived on Teesside she had died.

Speaking about the day his wife died, Mr Mitchell said: ‘She was rubbing her chest, and was cold, clammy and sweating.’

‘I knew straight away what was happening. She looked straight through me and collapsed.

He hopes talking about his wife’s death will save another family from heartbreak.

‘It is not getting any better, it is just getting worse. I am hoping by raising this someone else might not have go through what we have,’ he said.

Mr Mitchell’s local MP, Tory Dehenna Davison, raised the case in Parliament last week following report from a whistleblower that there could be up to 90 cases where paramedics have ‘covered up’ medical failings in official reports.

Ms Davison said: ‘As a retired paramedic, he knows the importance of timely care for cardiac arrest victims. 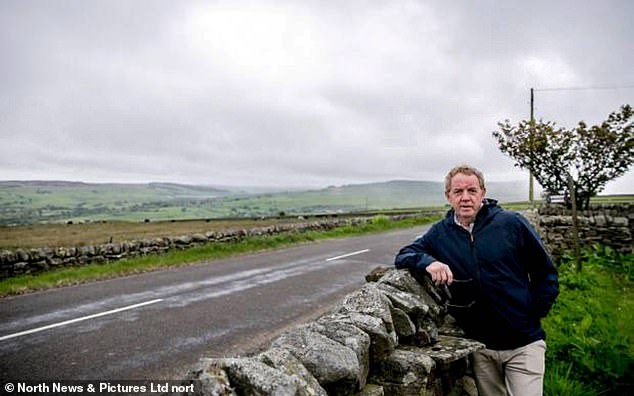 A former paramedic of 32 years, Mr Mitchell knows the importance of getting help quickly in medical emergencies and has previously campaigned for better access to services in County Durham where he lives 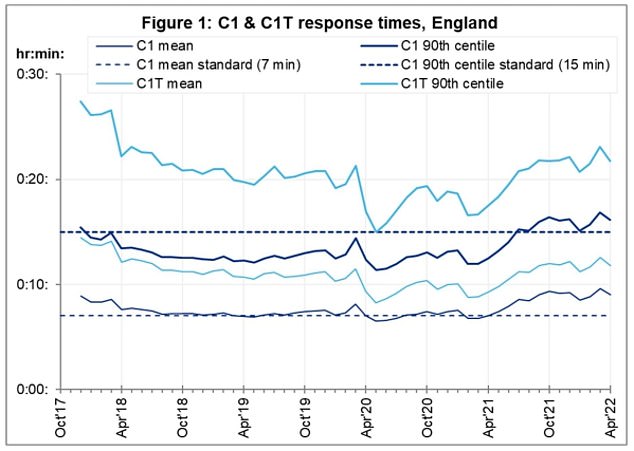 NHS ambulance response time data for April shows ambulance crews failed to meet a seven minute target (light blue dotted line) instead taking an average of 10 minutes to respond. Category one calls are considered the most life-threatening medial emergencies, such as cardiac failure

Ambulances are approaching ‘Titanic moment’ that could see them stop responding to 999 calls ‘within WEEKS’ as staff are overwhelmed, service chief warns

West Midlands Ambulance Service could stop responding to 999 calls in August as the ambulance trust approaches a ‘Titanic moment’ amid overcrowding in hospitals, its nursing director has said.

Mark Docherty, of West Midlands Ambulance Service, said patients were ‘dying every day’ from avoidable causes created by ambulance delays and that he could not understand why NHS England and the Care Quality Commission (CQC) were ‘not all over’ the issue.

In an interview with the Health Service Journal (HSJ), Mr Docherty said rising numbers of people were waiting in the back of ambulances for 24 hours before being admitted to hospital, and that serious incidents have quadrupled in the past year, largely due to severe delays.

He said the situation was now so serious that he is predicting the service will collapse in August.

‘Around August 17 is the day I think it will all fail… I’ve been asked how I can be so specific, but that date is when a third of our resource (will be) lost to delays, and that will mean we just can’t respond.

‘Mathematically it will be a bit like a Titanic moment.

‘It will be a mathematical (certainty) that this thing is sinking, and it will be pretty much beyond the tipping point by then.’

It comes as documents from a quality governance meeting at the trust in March showed another director warning that ‘deaths are happening which should not be happening’ and, nationally, patients are being let down in a ‘catastrophic situation’.

‘So it is shameful the wait for an ambulance was 90 minutes long and even more shameful that multiple ambulances then arrived on the scene, potentially preventing others from receiving the urgent care they needed.

‘My thoughts go out to Mr Mitchell and his family on their loss, and Mr Mitchell should be commended on his tireless campaigning for change at NEAS to help save lives.’

Mr Mitchell has now submitted a formal complain to NEAS and is considering taking the matter further.

‘On behalf of the organisation, I would like to offer my sincere condolences to Mr Mitchell and his family for their loss and would like to apologise for the distress caused by our response,’ he said.

Dr Beattie said while he was unable to discuss patient care publicly, he said the service was under ‘significant pressure’ on day of Mrs Mitchell’s death,

An investigation has been launched following Mr Mitchell’s complaint.

NHS ambulance guidelines state category one calls — those with life-threatening conditions, such as cardiac arrest — should have an ambulance on scene within seven minutes.

The latest NHS data for April shows nationally paramedics took just over nine minutes to respond to these calls on average.

Earlier this month whistleblowers alleged NEAS misled coroners by changing documents and witness statements about deaths linked to how it treated patients.

The whistleblowers reported this could have happened in as many as 90 cases in the last three years, and that they were offered non-disclosure agreements worth more than £40,000 by the trust.

They added that issues at the trust were sill happening to this day despite a report in 2020 which found NEAS was not handing over documents to the coroner properly.

Dr Beattie has said concerns about this issue had been raised by staff in 2019, and that an internal taskforce had achieved significant improvement in January 2021.

He added that concerns that have been raised involving patients who died after then were due to ‘minor issues’ of procedure and policy being followed and did not affect any families.