A fed-up wife has been hilariously documenting her husband’s failed attempts to keep their house tidy after going on strike over his claim that he was the only one doing the cleaning.

Jalie Gil, 27, from Florida, launched her first video on her @wifestrike TikTok account last week, explaining that she was going to teach her spouse a lesson by refusing to clean up after him for a week.

Things quickly started falling apart in the house, and in follow-up clips, she showed how the laundry was overflowing, his stuff was cluttered all over his side of the bathroom sink, and his shoes were on the floor.

Incredible: Jalie Gil, 27, from Florida, went on strike after her husband swore he was the only one who cleaned their house, and she has been hilariously documenting the fallout on TikTok 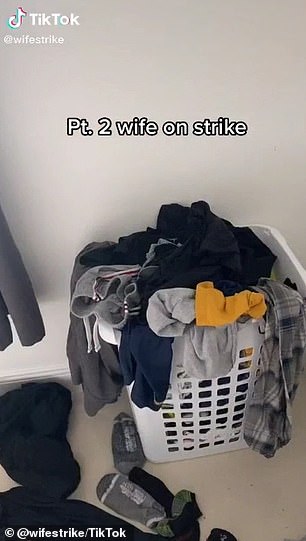 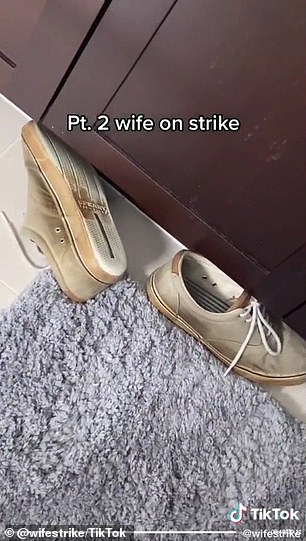 Mess: Things quickly started falling apart in the house, and she showed how their laundry was overflowing and his shoes were left on the floor 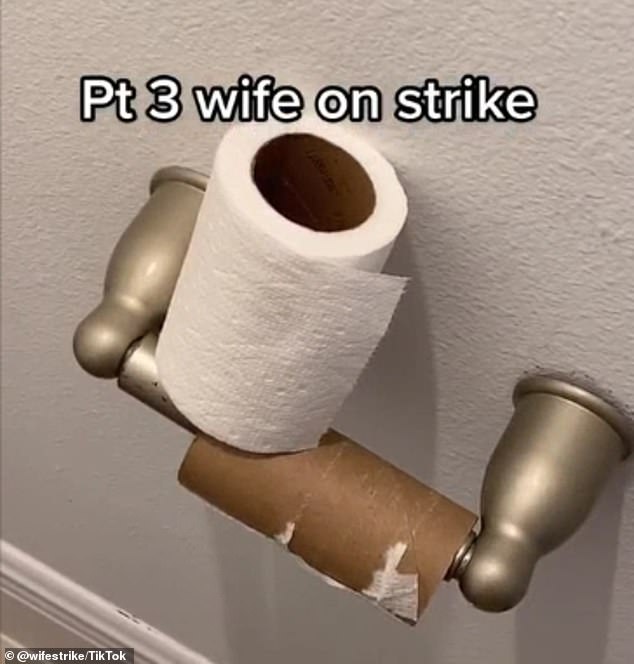 Can’t be bothered? In one video, Jalie panned the camera to show how her husband placed the toilet paper on top of the empty roll instead of changing it

‘Nope, not cleaning, she said, noting that she was especially not going to scrub the skid marks he left in the toilet that morning.

Thankfully, the inside of the toilet bowl was clean the next day, but she pointed out that the toilet seat was not. She panned the camera to show how her husband placed the toilet paper on top of the empty roll instead of changing it.

As for the laundry, he left it scattered all over the couch for her to fold, which she did not do per the terms of her strike. There was also a stray sock left on the floor that stayed there for days.

Her husband was still trying to get a handle on the mess by day three with little improvement, according to Jalie.

His attempt to clean the bathroom resulted in a blue cleaner stain on top of the toilet, while the plunger, toilet brush, and trash can were scattered on the ground. 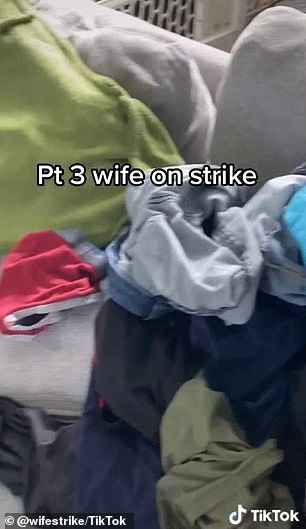 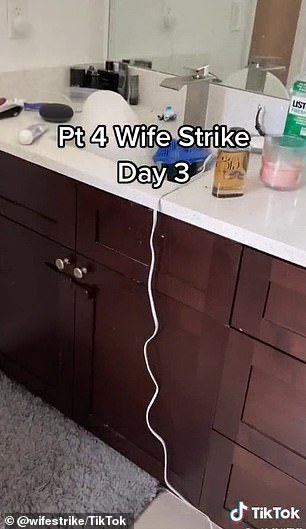 Messy man: Jalie’s husband left their clean laundry all over the couch, and his side of the sink was cluttered with products and tools 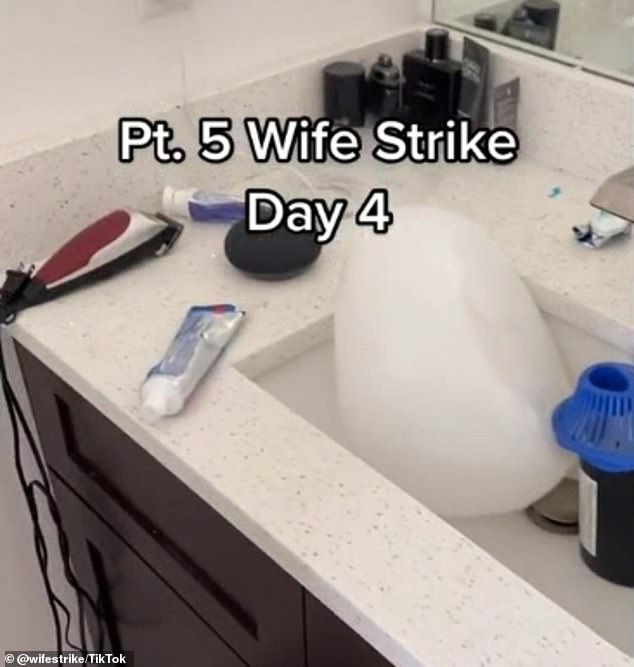 Too busy? Jalie pointed out on day four that the items remained in his sink the next day as well 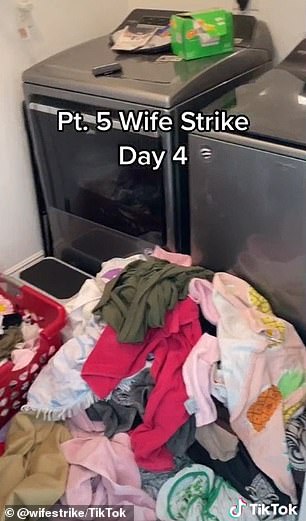 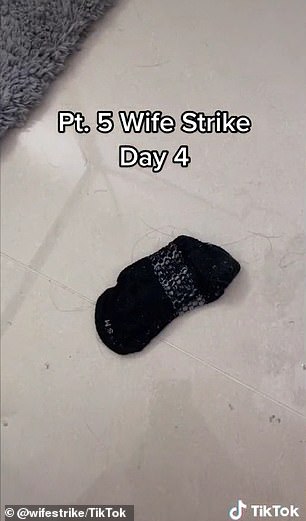 Hard to handle: Throughout the strike, the laundry room was constantly overflowing and there was always at least one random sock on the floor

He later claimed their toddler had knocked everything over in the bathroom, but that didn’t explain why he didn’t pick it back up.

Their hamper and dryer were also overflowing with clothes, prompting Jalie to note that this is ‘how the laundry room looks when your husband does it.’

Realizing that his wife wasn’t going to fold the clean laundry he left on the couch, he moved back into the basket, where it remained unfolded on day five.

He did finally clean the mess on his side of the sink, but he inexplicably left all the cleaning products on the counter.

The bathroom was also scrubbed down, and Jalie gave credit where credit was due, saying the toilet was the ‘best’ she’s seen it since they moved in. However, he failed to refill the toilet paper holder. 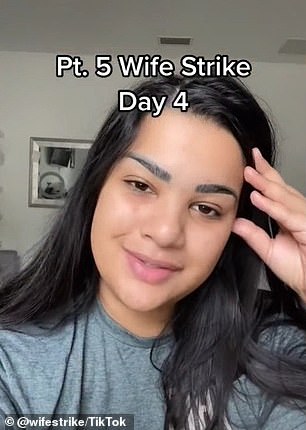 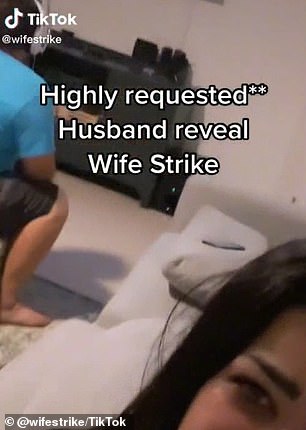 That’s him: Jalie gave fans a glimpse of her husband playing video games amid the strike 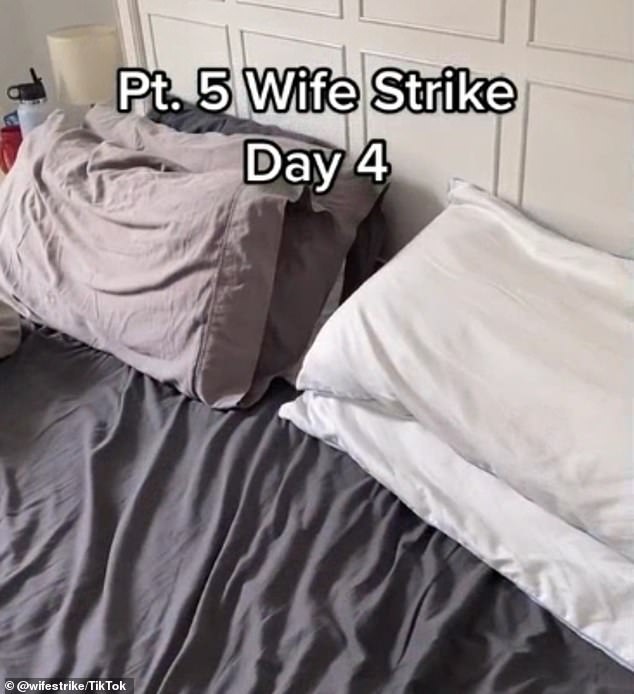 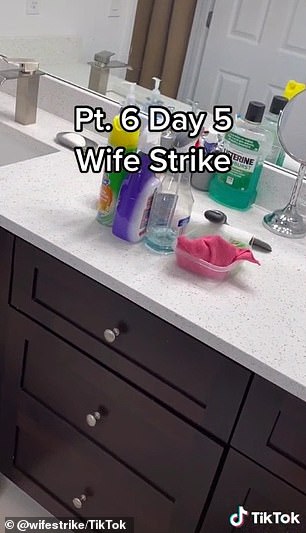 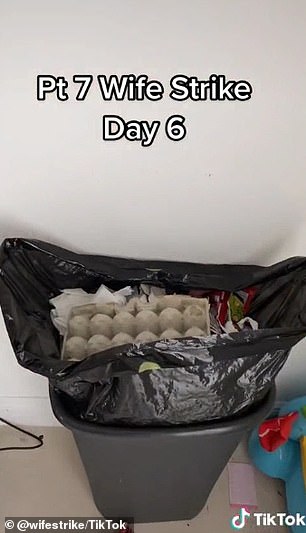 Still messy: While he finally cleaned the sing, he left the cleaning products out, which kind of defeated the point. He also failed to take out the trash

Throughout the strike, there was always at least one random sock on the floor and an item that her husband didn’t put away. He was also never able to get a handle on the laundry.

On the seventh day, she showed how the laundry was still all over the couch and laundry room, saying would not be taking over the chores.

‘Since the areas of concern have not been addressed the wife strike must continue,’ she wrote in the video’s caption.

Many encouraged Jalie to keep going and showed their support in the comments.

‘Today is SIGNIFICANT! He is expecting the strike to be over after today. Hold strong until he cleans up!!’ one person wrote. 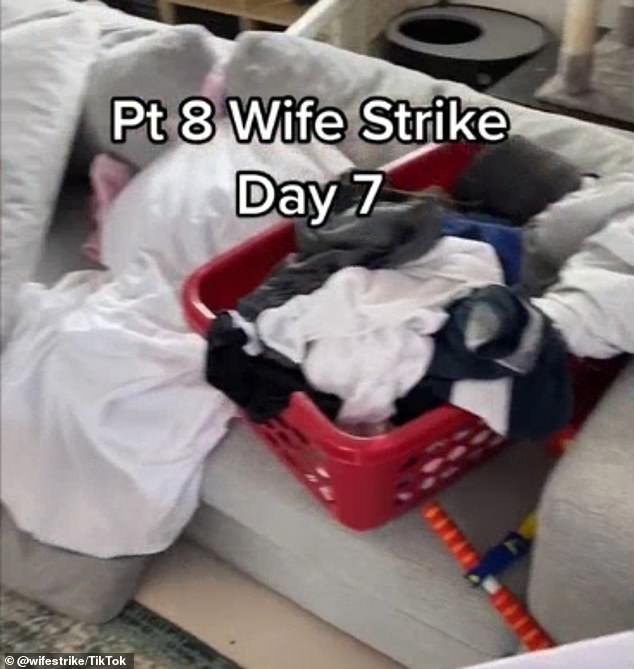 Frustrating: At the end of the week, the clean laundry was still all over the couch waiting to be folded 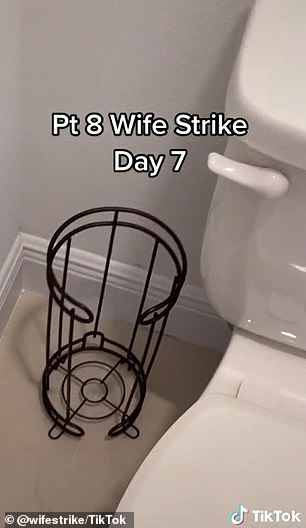 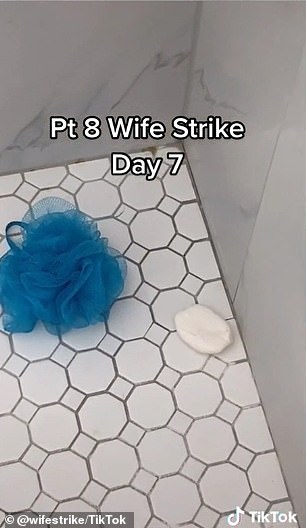 Not very tidy: There wasn’t any toilet paper in the holder, and his loofah and soap were left on the floor in the shower 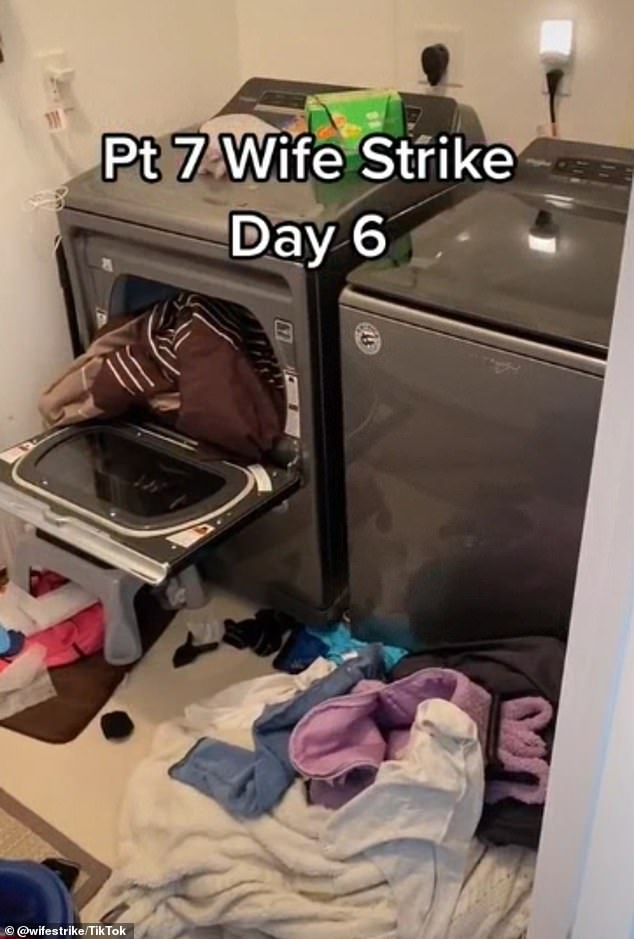 Still going: After the week was up, she declared that she was continuing the strike because the ‘areas of concern have not been addressed’

‘The strike continues: AS IT SHOULD,’ another added, while someone else shared: ‘Girl, good for you. Hopefully he will learn and change and y’all can move forward as a team eventually.’

Jalie told BoredPanda that she made the TikTok account on a ‘whim’ after her husband joked that he does all of the cleaning during a conversation about household chores.

‘I knew there had to be people out there with these husband and cohabiter woes,’ she said. ‘I realized that I was not alone and that I was conditioned to silently clean up after my husband that he literally forgets he ever left a mess behind.’

The mom added that there have been ‘small improvements’ in her husband’s behavior, but there are still issues.

‘I’m thinking a week long is not enough and I will follow through until the areas of concern are addressed,’ she said.