A chimney sweep came to my house recently to clean the flues, but he didn’t just do the job and leave. Instead, he spent half an hour enlightening me as to why I should replace my open fire with a wood burner, talking me through which stoves he thought were best.

Perhaps you’re expecting to hear that I was irritated to have a man in my house proffering unsolicited advice, but I was thrilled. In that one chat, I learned more about heating systems and stoves than hours of Googling could have yielded.

That is not the view taken by actress Claire Foy, who complained in a recent interview about friendly workmen daring to offer her some assistance.

The star of the recent BBC drama A Very British Scandal bemoaned the fact that two technicians hired to install her TV had the audacity to suggest where her new box might best be located. The cheek!

Katie Glass (pictured) believes what is often dismissed as mansplaining is simply helpful advice, rejected by women who are oversensitive about potentially being patronised

They ‘decided to give me a speech about how I was putting my TV — that I had paid for — in the wrong place,’ the 37-year-old actress wailed. She added: ‘I would never have presumed to tell a man, or anybody else, that they were wrong about where they were going to put their TV.’

Well, no. But then I don’t suppose they teach you much about aerial installation at drama college.

Foy had invited these experts into her home, so why was she angry when they tried to help? Because, we are told, this is another example of that blight of modern life: mansplaining.

It is a word I can’t stand. Like manspreading (men taking up extra room by sitting with their legs wide) or man-slamming (men’s alleged habit of barging past women on the street), it seems little more than a sexist, mean-spirited way to attack men.

To me, what is often dismissed as mansplaining is simply helpful advice, rejected by women who are oversensitive about potentially being patronised.

Far too many of us these days, I fear, shoot ourselves in the foot by refusing all male help, so keen are we to be seen as empowered equals.

If such a gendered and dismissive word were used to undermine women’s help, we’d be furious. Actually, there is such a word — to nag — and if a man dared use it about me, I’d be apoplectic.

So I would never use the word mansplain. But I must admit I rather like men giving me help. 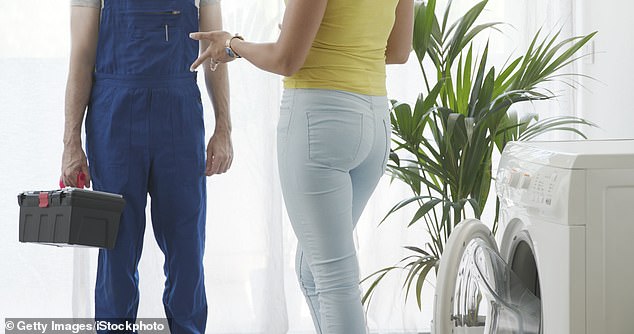 Katie said she doesn’t need advice that is unhelpful or obvious, but when men offer guidance on subjects they know more about she is extremely grateful (file image)

To be clear, I don’t like being talked down to. I take umbrage with random non-experts interfering, like if someone tries to tell me how to park.

But while I don’t need advice that is boorish, unhelpful or obvious foisted on me from an unskilled busybody, when men offer guidance on subjects they know more about, I’m extremely grateful.

I recently moved into my dream home, a house beset by endless problems, with damp, woodworm, dodgy electrics and other minor and major issues. While some women, capable in practical matters and knowledgeable about DIY, might have rolled up their sleeves and got on with tackling this work themselves, instead I preferred to put the kettle on and ask every workman who came by for his help (although I’d have been as happy to hire women to do the work if any had been about).

I give builders a cuppa and biscuits and sit taking notes

Did I mind that each workman who came to the house offered me advice? Some without even being asked?

On the contrary, I gave them a cuppa, a plate of biscuits and sat taking notes.

When one builder came over to deal with the damp, he volunteered to spend the best part of half a day helping me understand the mechanics of the house: showing me how my boiler works, where the waste pipes run and where to find the stopcock. I could have lived here for 20 years and not worked any of that out!

When another came over to put up some shelves for me, he explained that the spot on the wall I had chosen was unsafe because there were cables running behind it. I hadn’t even thought about this.

In fact, when I’d mentioned to a female friend that the wall was making weird sounds, she suggested it might be ghosts! And when another of my female friends stayed over, we spent the night shivering because we couldn’t work out how the thermostat might stop the heating coming on. 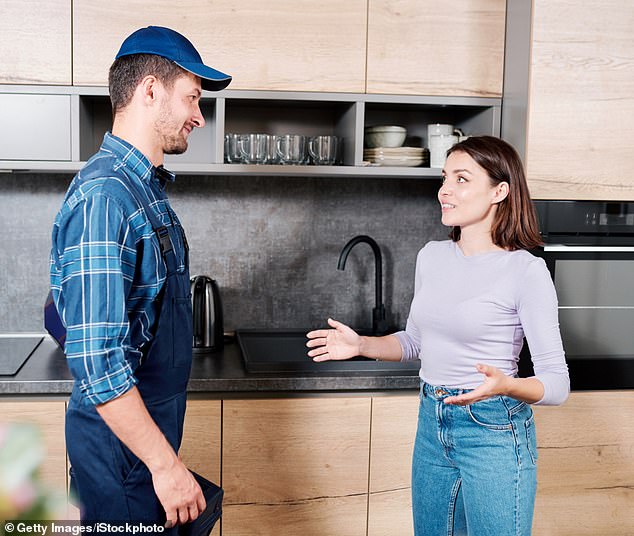 Katie said you can’t ask men for help, then get angry with them for offering more of it (file image)

By way of comparison, when the flush on my loo stopped working, a male friend who was staying automatically showed me how to fix it.

On a recent trip into town, I was wondering aloud how to get my smart TV working and, hey presto, a bloke standing next to me in the shop broke in to tell me all about HDMI cables, where to get one and what to do with it. Was I insulted by this? Don’t be ridiculous — I was deliriously glad he could help.

Since I moved into my house in rural Somerset, men I know have offered advice about how to plumb in the dishwasher (saving me hiring a plumber), how to tell if the oil tank’s empty (I was just waiting for the radiators to go off) and what I should do about a wobbly looking tree that I feared might crash into my bedroom in a high wind (I had never even heard of having a tree ‘topped’).

Are these examples of mansplaining? If so, then I live in the house that mansplaining built — and I’m grateful for every second of male advice and explanation that has gone into it.

For some men, offering advice is a way to show they care

When I ask my female friends about ‘mansplaining’, most admit that, while they are sometimes frustrated by unsolicited advice, there are plenty of times when they are grateful for assistance.

‘I once sent my dad a photo of the fuse box and said: “Tell me what to do”,’ one admitted.

Another told me she regularly sends her dad lists of odd-jobs. ‘If I need to paint something, I’ll ask my dad — he’s just better at it.’

That’s great. But you can’t ask men for help, then get angry with them for offering more of it. 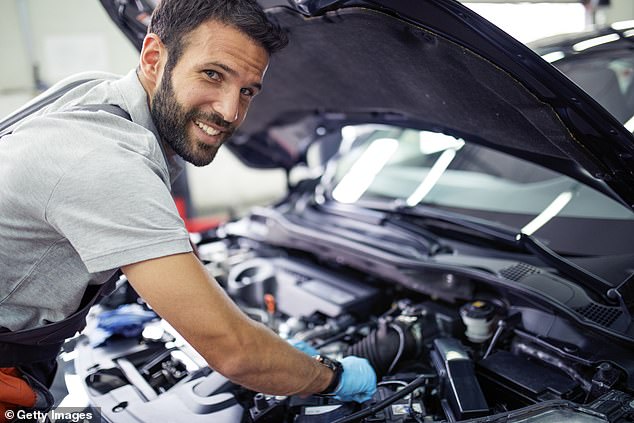 Katie said she will happily take a bit of mansplaining over a woke world in which men simply stop offering women help, for fear of offending us (file image)

Perhaps some would write off as mansplaining father-of-two Rob Kenney’s YouTube channel called Dad, How Do I?, but I was touched to see his videos of himself showing how to do practical jobs, such as checking a car’s oil levels and unclogging a drain.

The channel’s success (he has more than three million subscribers) suggests how many of us sometimes need a dad to turn to for advice. I sometimes wish I could call on my own father, if he were still alive.

I even think there is a certain sweetness to what some write off as mansplaining. For some men, offering advice is a way to show they care. While female friends celebrated my new house by sending me cards and cakes, male friends reassured me that the roof looked in a good state.

Of course, I know plenty of women are capable of doing practical things — I have friends who fix their own roof tiles and can install a log burner without breaking a sweat.

I don’t believe men’s penchant for DIY is a matter of gender difference or something they are born with — often they are simply lucky enough to be taught these things as they grow up. But given that, it would surely be churlish to stop them trying to help.

Ultimately, I’ll happily take a bit of mansplaining over a woke world in which men simply stop offering women help, for fear of offending us.

After all, in that world, I would be sitting in a freezing house with no working TV and a toilet that won’t flush.