Coco Chanel once said: ‘Simplicity is the keynote of all true elegance’ — and the celebrated French designer always lived up to this dictum.

So what is it about the clothes Chanel made that continue to make them so covetable that women can spend a lifetime wanting nothing else?

In essence, it is their timelessness. The designs have an ageless quality, so a dress bought as a young woman will still flatter you decades later.

It’s something we should all consider today, in a world at the mercy of cheap, disposable fashion.

For most, the clothes might seem extravagantly expensive, but those who buy them know they are investing in a lifetime of wear and an outfit that sings with the signature of peerless craftsmanship.

It takes 100 hours to make one Chanel suit and a 1,000 to make a wedding dress.  Chanel herself would personally give six fittings for a simple night dress.

For Chanel, the cut was everything. Her clothes had to make women feel better and look sensational.

The expert seamstresses are still based on the upper floors of 31 Rue Cambon. Her legendary showroom, below, is a room steeped in history, where regular clients have their personal wooden mannequins.

But there is nothing stuffy about her classic designs. Again and again, she emphasised the idea of elegance, twinned with wearability.

Keira Knightley wearing a Chanel white lace couture gown to the premiere of Misbehaviour last month was given a star quality that was dazzling.

The dress, luminescent white against the inky black March sky, was pure Chanel colouring, yet the actress was free to move in whatever direction she chose.

In my book, Chanel’s Riviera, there is a photograph of Coco Chanel standing in the garden of her villa La Pausa on the Riviera.

She wears a pair of navy trousers and a blue and white striped jersey top.

It is a snapshot taken in 1930 but it could have been taken yesterday since those stripy tops are commonplace today.

As a long-time Coco Chanel aficionado, I believe that this is because of the rules that Chanel herself followed all her life.

A true originator, she was fearless — never hidebound by what had gone before but determined to give women clothes that truly suited their lives.

Her 2.55 quilted leather handbag with leather and gilt shoulder strap, a slot for lipstick and a secret compartment that she said was designed for love letters.

Or the Little Black Dress, one of her many gifts to fashion, breaking not only the dominance of colour but a social taboo then written in stone.

Until then, black had been solely for mourning: if a woman wore a black dress, it invariably meant that someone close to her had died.

It took Chanel to realise that a well-cut black dress could be a wardrobe staple. The essence of a Chanel garment, new or vintage, is its timelessness.

Taylor Swift and Margot Robbie have both chosen to wear vintage Chanel over something new, and why not?

Her clothes are designed to be worn again and again — and then to be passed on. Her designs are investment pieces, with a market price all of their own.

As the legendary editor of American Vogue, Anna Wintour, said recently, we should value the clothes we own and wear them again and again.

‘And,’ she added, ‘maybe give them on to your daughter, or son, whatever the case may be.’ For as Coco Chanel herself said: ‘Fashion changes but style endures’.

Here, we meet four women who have spent a lifetime collecting pieces by the legendary designer.

I WAITED 25 YEARS FOR THE BAG OF MY DREAMS

Popsy Kundi, 47, is head of department for Chiswick Auction house. She lives with partner Francis Henry, who owns his own estate agency, in Wembley Park, London.

Popsy Kundi whose Chanel collection is worth £20,000

When I was 17, I went to Paris on a school trip. We did the Eiffel Tower and the Louvre but the thing that most impressed me was seeing all the elegantly dressed ladies leaving a shop on rue Cambon.

It was the Chanel shop and it was adorned with the most amazing black flap bags. I remember falling in love with them and thinking: ‘That’s the bag I want.’

But my limited budget when I was younger meant that my introduction to Chanel began with make-up, then skincare. I graduated to jewellery and belts but my fashion philosophy has always been that a gorgeous handbag — particularly Chanel — can transform a High Street outfit.

I started buying Chanel clothes around ten years ago and now I probably have around 30 things, including belts and jewellery, in my collection.

I have a black bouclé jacket, a black suit, but my most expensive piece is a new addition — a gold maxi flap bag (left) which cost £4,500. There’s nothing quite like the feel of wearing Chanel.

When I celebrated my 40th birthday in Claridges, I wore top-totoe Chanel and felt as though I was walking on air. I never forgot the black flap bag I’d seen in Paris all those years ago and, when I started working for the auction house five years ago, I was stunned to see it come up for sale.

I said to my partner: ‘I have to have that bag’ — and bid for it. I won it for £1,500. It is by far the most treasured item I have — and while I’ve sold some pieces to make room for others, I know I will never part with it

I BOUGHT CHANEL WITH MY FIRST PAY CHEQUE

Betsy-Blue English, 22, is an actress and fashion designer. She lives in Chiswick, West London. 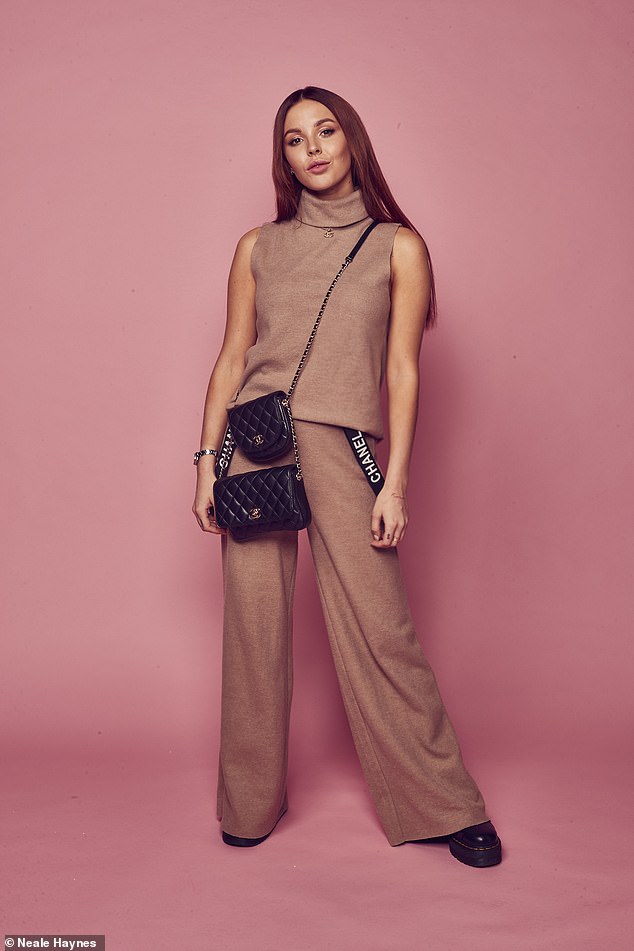 Betsy Blue English, a 22 year old actress with a Chanel collection worth £10,000

There is no other brand like Chanel. While others dip in and out of fashion, Chanel remains timeless and I’ve been obsessed by it for years. I couldn’t say how many pieces I have in my collection but it includes clothes, bags, shoes and sunglasses.

My passion started when I used to visit family friends in Beverly Hills as a child. It’s the kind of place where children get their Chanel bag at the age of five — and one of our friends had a wardrobe full of it.

I remember seeing ladies shopping in Rodeo Drive with their Chanel handbags and I dreamed of having my own. Finally, when I was 16, I was able to buy one. I used my first pay cheque from an acting job and I bought a light grey lambskin bag for £1,500.

It was the most heart-fluttering moment of my life. Three years later, I was in Harrods when a lady stopped me, admired the bag and said she’d buy it there and then.

I was a little shocked but went home and did some research and the bag had tripled in value. So I sold it.

I was a little sad to say goodbye to my first ever Chanel bag but I’d always been nervous about getting it dirty. Now, I always buy black bags.

Since then, I’ve bought and sold many pieces through Designer Exchange, often for double or triple the amount I’ve paid for them.

I keep an eye on the new collections and put money into my ‘Chanel Fund’ every month.

I’VE GOT SO MUCH OF IT I’VE LOST COUNT!

Luna de Casanova is a former model and fashion commentator, who is in her late 40s. She lives in Central London with her two whippets, Bertie and George. 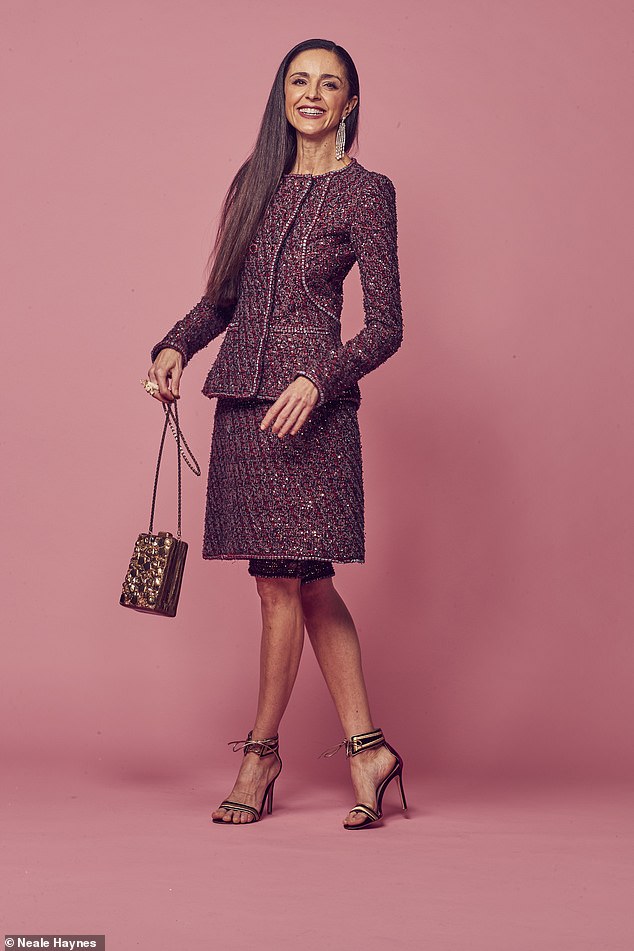 Growing up in Madrid, women dressed conservatively and bought selectively. Unless you were wealthy, you saved to buy an outfit or handbag, which you would then use for the rest of your life.

The first piece I bought was in Tokyo, aged 17, while working seven days a week as a model. I was becoming jaded but then saw a classic black and gold Chanel handbag in a shop.

I bought it for £1,000 the next day and never complained about long hours again! My favourite is a burgundy coat and skirt from the Autumn/Winter 2014 haute couture collection.

It was a gift from a dear friend so I don’t know the cost. My next favourite is a dress worn in the Spring-Summer 1995 show by Linda Evangelista.

I picked it up at auction, and although it is too large for me, I would never give it up. Having said that, I try not to keep clothes that I don’t wear, giving them to friends and family.

MUM PASSED ON HER GREAT LOVE TO ME

Dr Tess Hartmann CBE, 50, is a businesswoman who lives in London. She is married with four children.

My love of Chanel began with my mum. She grew up in a working-class household in Glasgow, but later, along with my father, set up in business and became successful.

When she first made her money, the first thing she wanted to spend it on was great quality clothes — and her idol was Coco Chanel.

I have a fond recollection of her wearing a beautiful cropped red bouclé blazer for my wedding 23 years ago.

She passed away six years ago and her collection of blazers and handbags came to me. Unless you were a connoisseur, you’d never know if I’d bought them yesterday or decades ago.

I bought my first Chanel for my wedding going-away outfit — a black miniskirt and cropped black blazer with white trim. It cost around £800 but I was more excited about buying it than the wedding dress!

The skirt is now a little tight but I can still fit into the jacket. My collection runs to 50 pieces, including shoes and bags. I’d rather buy just one key piece a year as I know it’s always going to be in style.