EXPRESS INFORMER > Science & Technology > Why we love John Lewis at Christmas: The psychology behind festive adverts

Every year, households across the country get misty-eyed at the latest Christmas advert from John Lewis.

This November was no different, with the department store releasing ‘The Beginner’, which shows a middle-aged man struggle to learn how to skateboard.

At the end of the clip, it is revealed that his endeavour was to help bond with his foster daughter, who comes to visit clutching her own board.

To celebrate its release, MailOnline looks at exactly what it is about these adverts that pull on our heartstrings. 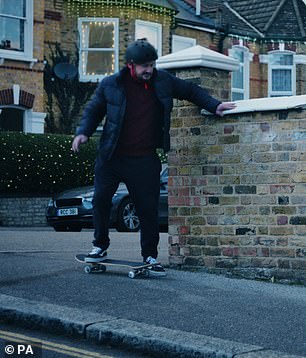 The John Lewis Christmas adverts are famous for having a deeper message, and have often been linked with charity campaigns 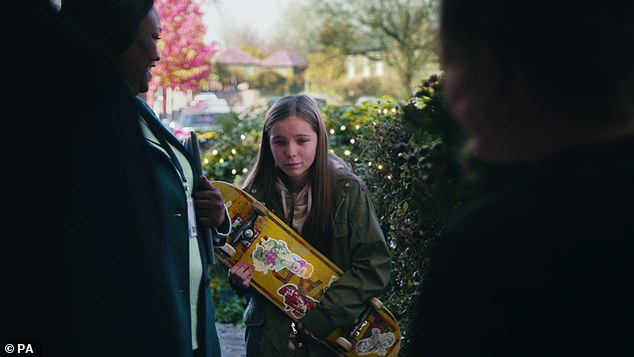 ‘The Beginner’ is linked to charities Action for Children and Who Cares? Scotland, and is intended to raise awareness of those living in and leaving care over Christmas

WHY DO WE LOVE  CHRISTMAS ADVERTS SO MUCH?

They tell a story – Research has shown that we find it easier to remember stories than lists of information, so we connect more with a narrative than just product promotion.

The stories use metaphors – Many of the stories evoke situations that could be applied to the viewer’s life, making them relatable. They also make our brain’s work harder to understand the message, which results in a bigger reward.

They have a familiar soundtrack – John Lewis tend to back their adverts with a cover of a popular song, which creates a comforting sense of familiarity.

Speaking exclusively to MailOnline, Dr Annmarie Hanlon, a Senior Lecturer in digital marketing at Cranfield University, said: ‘Successful ads, according to researchers and practitioners, are those with emotion.

‘Overall in 2022 we’ve seen a change in tone. Surrounded by bad news and more doom and gloom, the brands have toned down their offerings.

‘We may be in for a bumpy ride ahead with reduced budgets, increased costs, but recognising someone else with greater need can make us feel good about doing good.’

They tell a story

John Lewis has been releasing adverts at Christmas for many years, but the first dedicated festive campaign was in 2007.

Initially, these adverts did not tell a heartwarming story, and instead served to promote their products as potential Christmas gifts.

However, in 2011, the department store released ‘The Long Wait’, which featured a little boy impatiently counting down the days to December 25.

While it is assumed he is looking forward to opening his own pile presents, at the end it is revealed he was actually excited to give his parents their gift from him.

Set to a cover of The Smiths’ ‘Please, Please, Please, Let Me Get What I Want’, it was the first year John Lewis put the annual advert online before broadcasting it on TV.

It gained more than one million views in the first day alone, which experts put down to the shift in focus from the products themselves to telling a festive tale.

Research has shown that human brains are hard-wired to connect with stories.

In 2010, Princeton University researchers used functional MRI to image the brain of a person telling a story and another listening to it.

It was shown that their brain activity became synchronised, in both language processing areas and in networks involved in understanding meaning.

The more strongly the brains were synchronised, the greater the understanding between the storyteller and listener.

This led the researchers to suggest the process serves as a ‘mechanism by which brains convey information’.

Stories have also been proven to be easier to remember than a set of facts or information.

‘Things that happen in real life don’t always connect directly, but we can remember the details of each event better if they form a coherent narrative,’ said Dr Brendan Cohn-Sheehy, from the University of California – Davis.

In 2021, Dr Cohn-Sheehy and his colleagues used functional MRI to image the hippocampus of volunteers as they learned and recalled a series of short stories.

The stories were constructed so that some formed connected, two-part narratives and others did not.

They imaged the participants’ brains whilst they learnt the story and again when they recalled it.

It was found that those who learnt the cohesive story showed more similar patterns of activity during learning and recalling than those with the story that didn’t connect.

This shows that our brains support remembering two distinct events when they are connected by a narrative, by reinstating activity from when the information was learnt.

A story in an advert will therefore resonate more and be more memorable for the viewer than one which just shows products.

The stories use metaphors

It is not just the story itself that helps us connect with and remember an advert, but how it is told.

Dr Jeanette Littlemore, a Professor of Applied Linguistics from the University of Birmingham, says it is all to do with using ‘tropes’.

Tropes are elements or plot devices that mean something different from their ordinary meaning, such as metaphors.

She said: ‘Research shows that the creative use of tropes, such as metaphor and metonymy, significantly improves the likelihood of an advertisement’s success.

‘People are better at remembering, appreciating, and perceiving as more convincing adverts that use these tropes creatively.

‘And, surprisingly, if one needs to make a bit of effort to understand the advert…the result is more rewarding.’

She uses the example of ‘Excitable Edgar’, the John Lewis Christmas advert from 2019 that tells the story of a dragon that cannot control the flames from his mouth.

In one scene, Edgar approaches a snowman to put the carrot on its nose, but the camera cuts away, before returning to show it melted on the ground. 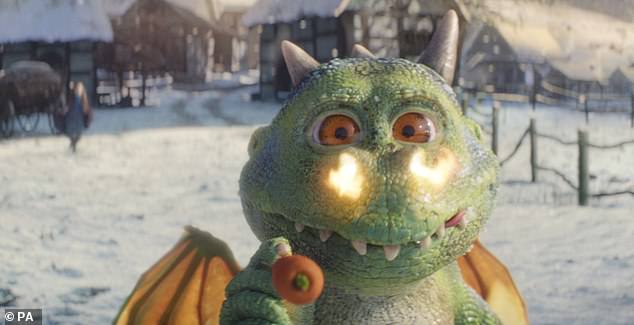 In one scene in the 2019 advert ‘Excitable Edgar’, Edgar approaches a snowman to put the carrot on its nose, but the camera cuts away, before returning to show it melted on the ground

This meant the audience had to infer what happened, which is more rewarding for the brain

This meant the audience had to infer what happened, which is more rewarding for the brain.

The John Lewis Christmas adverts are also famous for having a deeper message, and have often been linked with charity campaigns.

‘The Beginner’ is linked to charities Action for Children and Who Cares? Scotland, and is intended to raise awareness of those living in and leaving care over Christmas.

Dr Littlemore says that the metaphors in these adverts are not always spelled out to the viewer, which helps it seem uniquely relatable to them.

With ‘Excitable Edgar’, despite accidentally melting an ice rink and setting fire to the Christmas tree, he is still invited to Christmas dinner.

Dr Littlemore said: ‘The advert appeals more generally to the need on friendship in life, building strong bonds in the community, the need to bring people in from the cold and ‘literally’ warm them up in the context of the migration crisis.

‘Of course, none of these metaphors are made explicit in the film, and that’s the most attractive feature of metaphorical stories: that we can reconstruct them in ways that are most appealing to ourselves and that are still compatible with interpretations that will be made by others.

‘It is left to us to make the links for ourselves.’

Arguably one of the most quintessential elements of the John Lewis Christmas advert is the soundtrack. The 2013 advert ‘The Bear & the Hare’ (pictured) was backed by a slowed-down cover of ‘Somewhere Only We Know’ by Keane

A sense of familiarity is created through linking the lyrics of the song to the advert itself. For example, the 2015 ‘The Man on the Moon’ advert (pictured) tells the story of a young girl who spots an old man alone on the moon, and has the song ‘Half the World Away’ in the background

Arguably one of the most quintessential elements of the John Lewis Christmas advert is the soundtrack.

Over the years adverts have been backed by slowed-down covers of Oasis’ ‘Half the World Away’, ‘The Power of Love’ by Frankie Goes to Hollywood and ‘Somewhere Only We Know’ by Keane.

Research has found that 1 in 5 people in the UK typically associate a song or artist with a Christmas advert.

After analysing seven years’ worth of ads, the AI identified 92 instances of ‘songs’, and was the most repeated element.

There is a reason for this, as music is able to elicit a strong emotional response in the viewer, and is strongly linked to memory.

Scientists at University College London found that the human brain can identify a familiar song in as little as a tenth of a second.

Studies have also found that listening to pop music released within their lifetime can help patients with dementia and severe brain injuries recall personal memories.

How the John Lewis adverts tend to be backed with a cover of a popular song takes advantage of this familiarity.

But the twist it puts on the track, by having a different vocalist or putting it in a new genre, piques the viewers interest and creates a new association to it.

A sense of familiarity is also created through linking the lyrics of the song to the advert itself.

For example, the 2015 ‘The Man on the Moon’ advert tells the story of a young girl who spots an old man alone on the moon, and has the song ‘Half the World Away’ in the background.

In this year’s advert, ‘All the Small Things’ is known to be a punk rock song, and is played while a man learns how to skateboard.

Shazia Ginai, the CEO of neuromarketing company Neuro-Insight says that this ‘aligns the song with pre-existing associations and can indicate familiarity’.

She told Marketing Communication News: ‘When it comes to how to maximise the use of sound, we have seen that by aligning the audio cues with the visual narrative brands can expect stronger peaks of memory encoding.

‘After all, we’ve all got those songs that remind us of a certain place or time in our lives. This familiarity drives stronger right brain memory response.’

We all love to get in the Christmas spirit and spread a bit of festive cheer.

But now a new study suggests that doing so can have a positive impact on your mental health and wellbeing.

That’s because taking part in a carol service makes you happier, researchers claim.

More than 1,000 people attending Christmas services at Liverpool Cathedral were surveyed before the service and again just before it ended, using the widely-used psychometric scale, the Oxford Happiness Inventory.

Overall, people scored significantly higher in the second test than the first, suggesting that attendance at the service made the participants happy and had a big impact on their mental health and wellbeing.