A voice behind me says: ‘Just step off.’ Fair enough — but I’m standing on the edge of a platform, 65 ft above Utah’s Olympic Park.

The past hour has been spent swinging, swaying and sweating my way around the Summer Canyon Course, a vertiginous circuit of rope, metal and wooden obstacles, designed to test agility and balance.

Having the legs of Charlize Theron would have helped (not only for spanning the wildly wobbling walkways but also for life in general), but after a whiz on a zip line above the pines, my pint-sized pins have brought me to the Drop Tower: the final challenge.

The Olympic Park, just outside the artsy mountain resort of Park City, is one of northern Utah’s year-round attractions, offering just as much fun in the sun as when blanketed with the Greatest Snow on Earth® (yep, it’s been trademarked by the state, so confident is it of its claim).

For many, Utah is all about the classic cowboy scenes of the south — rugged deserts, rust-red rocks and the Mighty Five national parks of Arches, Bryce Canyon, Canyonlands, Capitol Reef and Zion. But the north, sans snow, is painted from a different palette: emerald fir forests fringing dark granite peaks, turquoise mirrored lakes reflecting blue skies, and rivers bubbling over lichen-shrouded rocks.

Instead of dry heat and dust, alpine air is a refreshing reminder of the elevation: Park City sits at least 7,000 ft above sea level.

Stretching 160 miles from the Utah-Idaho border, the Wasatch Mountains are a playground for hikers and bikers. Trekking Layton’s 3.4-mile Adams Canyon Trail, I’m rewarded by the shimmering Great Salt Lake, America’s own Dead Sea, before rock-hopping along a riverbed to a moss-drenched oasis, showered by 40 ft falls

Only an hour away, the lush Heber Valley offers thrills of the motorised, muddier kind, with tours in a self-drive ‘side-by-side’ (uintarecreation.com).

Like dune buggies on steroids, these all-terrain vehicles are ideal for bombing through the silver, aspen-lined trails and soupy ditches of Wasatch Mountain State Park.

I put pedal to metal and roar off, mud flying as we belly-laugh our way through the woods.

It’s not usually how I like to check in to a hotel, but the receptionist at Midway’s Homestead Resort pretends not to notice as I stand in the lobby dressed in head-to-toe Jackson Pollock and smelling of finest Eau-de-Splat.

After squelching my way to my suite, I head to the resort’s natural, geothermal spring in a limestone crater.

A slower, mud-free morning is spent wandering the galleries and boutiques of Park City’s historic Main Street, the spiritual home of the annual Sundance Film Festival, chaired by actor and director Robert Redford, who was propelled to fame by the 1969 movie Butch Cassidy And The Sundance Kid.

Cradled in an epic canyon at the base of imposing Mount Timpanogos — on land Redford bought to protect it from development — the Sundance ski resort is a masterclass in understated mountain style.

Less than an hour south of Park City, the Kid has created an inspirational, environmentally conscious retreat with cosy log cabins, craft workshops, a spa, yoga yurts, organic restaurants and sky lifts soaring guests from the pines to the peaks. 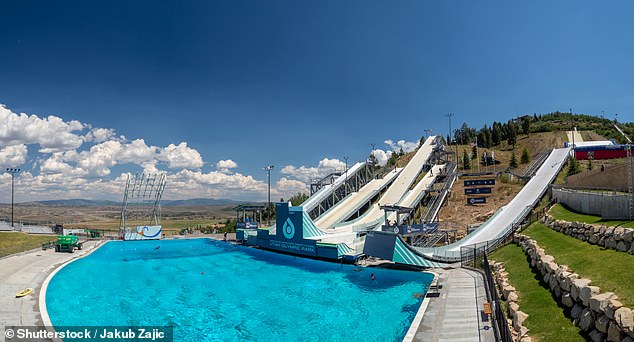 Famously Mormon — 62 per cent of the state’s residents belong to The Church of Jesus Christ of Latter-day Saints — Utah has a complex history of liquor laws and, though far from ‘dry’, restrictions still apply on alcohol sales and strength.

You would never know it as we sink fiery whiskey cocktails in the Owl Bar, Sundance’s timbered, duskily lit drinking den.

Nothing can beat the cowgirl credentials notched up by slugging in the style of Butch Cassidy, whose notorious Hole-in-the-Wall Gang propped up the Owl’s restored 1890s rosewood bar in its original location, Thermopolis, Wyoming.

The next day, standing on the edge of the Drop Tower under a clear, spring sky, I summon my Sundance strength, take an imaginary slug of moonshine and step out into thin air: a leap of faith that throws me into exhilarating free fall. I’m harnessed up but it’s still terrifying.

I guess we all have to come back down to earth some time, even in Utah.

Lauren travelled with America As You Like it (americaasyoulikeit.com), which offers nine nights in Utah from £1,795pp, including car hire and return flights. Doubles at Sundance Mountain Resort (sundanceresort.com) from £170 per night, room-only. More information at visitutah.com/uk.