Even several miles away from the Walleys Quarry landfill site in the Staffordshire village of Silverdale its putrid stench thickens the air and coats your tongue, nostrils and clothes.

Steve Meakin, from Poolfields — a mile from the tip — says it’s ‘like having a rotten egg in your top pocket’. 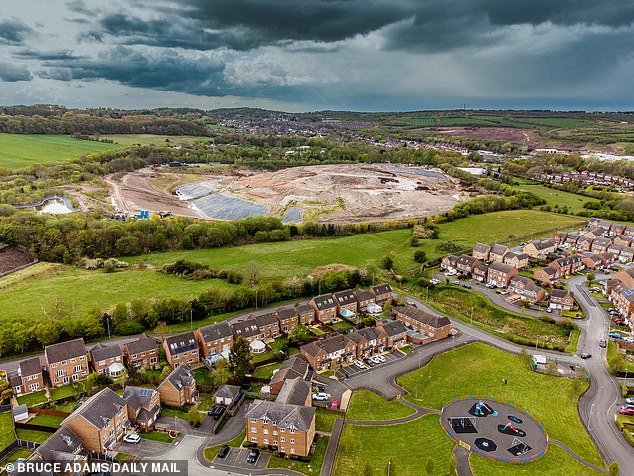 Waste management company RED Industries said it was ‘acutely aware of the communities’ concerns’ and work was under way to ‘seal an extensive area of the site’. 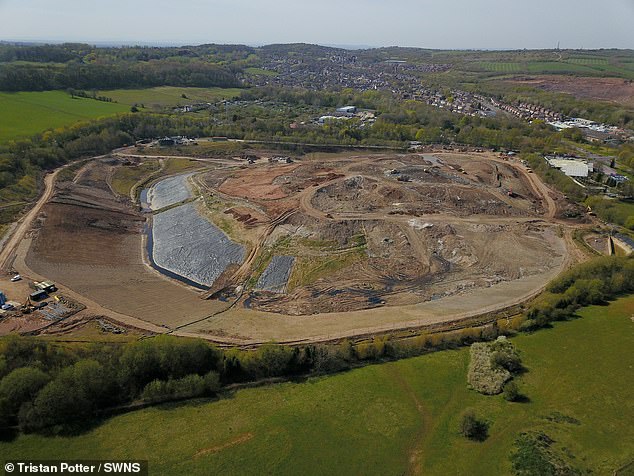 The odour given off is causing stress, anxiety and sleeplessness, Public Health England said

The smell is caused by hydrogen sulphide — a corrosive gas with that characteristic eggy smell — released as waste matter.

Worryingly, according to the Environment Agency (EA), levels far exceed World Health Organisation guidelines. An EA report last week confirmed the odour is above ‘annoyance’ levels for 22 per cent of the month.

Annoyance? The smell is stupefying and permeates everything from hair to upholstery.

To a newcomer, it is utterly rancid and revolting. Residents claim it’s actually so mellow on the day the Mail visited that they barely notice it.

At night, it is much worse. Some wake up gagging, with splitting headaches and itchy eyes, desperate for fresh air.

Sometimes, it’s so bad they get up at 3.30am and drive, past the Silverdale sign scrawled with ‘It stinks — we’re sorry’, to Market Drayton, 15 miles away, to breathe clear air.

Many have sealed their letter boxes, window frames and even chimneys with tape in an attempt to keep out the stink.

‘It even comes up through the drains,’ says Lee Moulton, 43, who lives a mile and a half away from the site with his family. ‘Some days it’s so bad I can’t even walk my dogs.’

Residents are at their wits’ end. Despite more than 5,000 complaints within the past month — 2,000 last weekend alone — demands from the council for it to close, and pleas by local MP Aaron Bell for help from Red Industries, which runs the site, nothing seems to change.

Last Monday, 500 locals marched on the company’s HQ chanting: ‘Stop the stink.’ Yet the lorries keep on arriving and refuse levels keep on rising.

The site, converted from an old clay quarry, has been here for 14 years. People had become used to a bit of a whiff, but nothing quite as awful as what is emitted now.

Chef Nathan Wint snapped in January when his six-year-old daughter came downstairs and promptly vomited. ‘We’d taped up all our windows and vents, but as soon as we open our bedroom doors, it still hits us,’ he says. 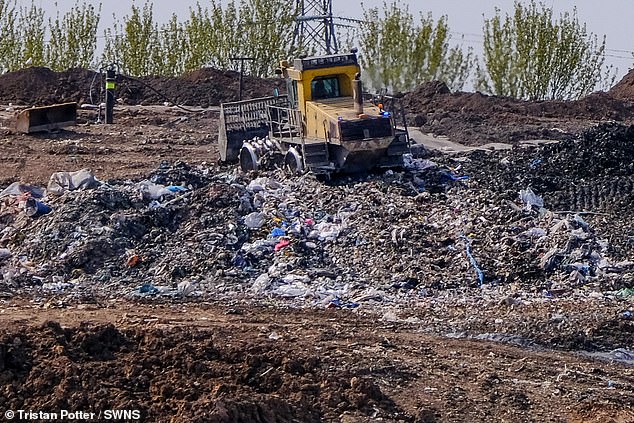 Walleys Quarry in Silverdale, Newcastle-under-Lyme where local residents have been complaining of a foul stench coming from the site 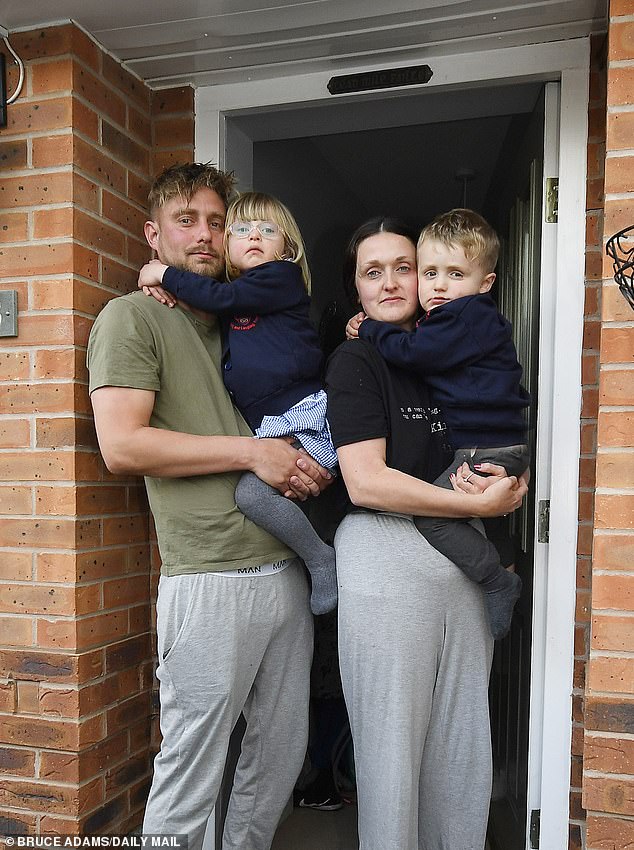 He took the day off work, gathered a length of scaffolding chain and secured himself to the main gates of the site. There he stayed for six-and-a-half hours — drinking coffees supplied by supporters — until he was forcibly removed by authorities.

Nathan, 31, with a chap called Tom Currie, has since set up ‘The Landfill Stinks Cap It Off’, a Facebook group with more than 9,000 members, encouraging residents to report air quality levels.

They are also raising money for purifiers for villagers and have given away hundreds of them.

Originally, the site was owned by a company called Lafarge and there were several times when the smell hit Silverdale in bad waves. Since Red Industries took over in 2016 and increased the amount of waste dumped, locals say life has become unbearable.

It is particularly bad on calm, cool days — ‘paradoxically, the heat seems to dampen it down,’ explains Nathan — and at weekends, when the extraction system used to syphon off gas and sell it to the national grid (for electricity generation) is switched off.

Suzi Stringer, 40, describes it as rolling down the streets like ‘Scotch mist’.

‘We have a WhatsApp group with the neighbours. You can see how the gas travels down the street based on the messages coming house by house.’

Apart from the unpleasantness, what exactly are the risks associated with hydrogen sulphide? While the EA says it does not expect there to be any long-term effects, data has been sent to Public Health England (PHE) for ‘independent assessment’, and air quality monitoring will continue at the site until August 31.

Yet GPs report worsening asthma and a spike in mental health issues, while teachers claim their pupils suffer headaches, nausea and concentration issues.

The impact on lives is hard to overstate. Covid aside, locals can’t and won’t socialise with anyone from outside the area. ‘We’d be far too embarrassed to ask anyone back to our homes because of the smell,’ Nathan says.

When outsiders arrive, the first thing they utter is either ‘what the hell is that smell outside your house?’ or ‘I don’t know how you can live here!’

‘It wears you down,’ says one mother, who uses three different air purifiers and scented candles to combat the stench.

Nathan is one of the lucky ones. He rents his home — so, theoretically, could move, but he refuses to countenance a retreat. ‘This is where I grew up. It’s a fantastic place to live, with an amazing community,’ he says. ‘We just want our lives back.’

‘People say: ‘What do you expect if you buy a house next to a landfill?’ But we didn’t. It wasn’t a landfill when we bought it,’ says Lee Moulton.

Which begs the question: who is going to buy a house on the Galingale estate now, barely a stone’s throw from the site?

‘For Let’ signs festoon the estate like bunting and homeowners are so desperate they have been forced to offer huge discounts. Not to families who will contribute to the community, but to professional landlords buying up the estate for short-term lets.

‘These houses will only be let and the lovely community that is here will vanish for ever,’ says one resident.

It’s not just the smell that’s affecting the area. Traffic generated by the site is appalling, too.

Lorries come from as far as Scotland. Liquid waste leaks from some. Detritus falls from others, littering the streets. The sheer volume of traffic — ‘one day we counted 75 lorries’, says Nathan — damages the roads.

‘It is blighting the whole town. It’s an environmental disaster,’ says Nathan.

He’s right. The town is deserted, gardens and streets are empty, playgrounds abandoned.

At Silverdale Cemetery, mourners cannot linger. They leave their flowers and hurry off, handkerchiefs over mouths. The air is dirty as well as smelly.

‘When they’re tipping, it generates a thick dust,’ says Lee.

Cars and garden furniture are covered in a film of dirt, no one hangs their washing out and windows look smeared. That’s not to mention the thousands of seagulls attracted by landfill.

‘They all fly over here. Literally thousands of them. It’s like a scene from a horror movie.’

‘Red Industries told us the landfill would only be for rubble, but seagulls don’t eat rubble,’ says Suzi Stringer.

It is nothing short of a living nightmare. Red Industries — recently rebranded to Walleys Quarry Ltd — did not respond to the Mail’s calls or emails.

They were scheduled to complete a partial ‘capping’ — covering waste with layers of clay, sand and soil or ashphalt and vegetation — to keep the refuse in situ and minimise odour. Meanwhile, their planning permission for tipping lasts until 2026.

Which means the suffering in Silverdale looks set to continue.

‘It’s such a shame because it’s a really nice place to live. The people are great, the community is amazing and this has brought us all even closer,’ says Nathan. ‘If it just weren’t for the smell.’