You may have taught your dog to sit or tutored your cat to respond to their name.

But this pales into insignificance when compared with some of the skills other animals are learning in order to improve human health.

Recently, Good Health revealed how scientists have trained bees to play football as part of work to help us understand how human memories work.

The bees had to move a little ball to a goal, for which they got a reward (a drop of nectar); in this way the bees learned to commit the skill to memory.

In March, researchers in France published a trial in the journal iScience, revealing they had trained ants to detect cancerous cells.

‘Cells are like tiny factories: they need fuel and they produce waste. Ants have an impressive sense of smell and can detect the specific waste given off by cancer cells,’ explains Professor Baptiste Piqueret, a researcher of animal behaviour and the trial’s lead author.

The ants were trained by putting them in a space with a container of sugar solution next to a sample containing ovarian cancer cells from human patients.

A team at Emory University in Atlanta has trained dogs to lie in MRI scanners, a process that requires them to be so still that they can’t even scratch. This provides a non-invasive way to see how their brains work

While drinking the sugar solution the ants could smell the cancer cells, and they started to associate this scent with reward.

‘You won’t see ants in hospitals yet, as the future of this method is to use not cells but urine or sweat — we expect one day you’ll give a sample to your doctor and that will be presented to trained ants to see if they react to it,’ says Professor Piqueret, now based at the Max Planck Institute for Chemical Ecology in Germany.

While dogs have been trained to detect Covid-19 infection and can alert their owners to impending falls in their blood sugar or epileptic seizures, ‘ants learn far faster, in minutes rather than months’, says Professor Piqueret.

Recently, Good Health revealed how scientists have trained bees to play football as part of work to help us understand how human memories work

Rats at the wheel

In the experiment, the animals drove by pushing on bars that took them left and right — the object being to learn how to navigate the car towards a snack.

‘We’ve recently stopped reinforcing them with treats and they still drive the cars, so it seems as if they enjoy it,’ says Professor Lambert.

The findings may help us examine how changes in movement or spatial skills occur with age. 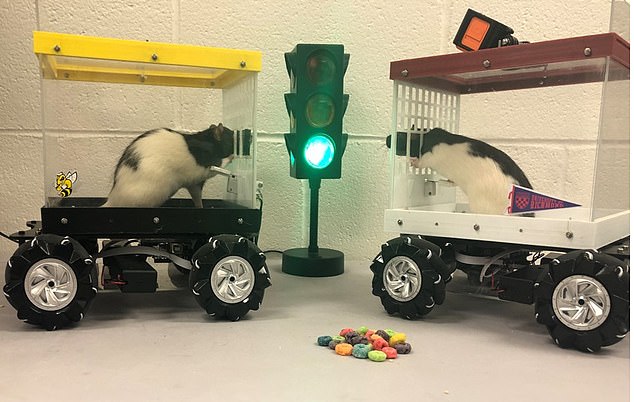 A study in 2017, published in the journal Royal Society Open Science, showed that sheep can be trained to recognise faces.

To train them, the sheep were given treats when they picked the face of a celebrity, including Barack Obama and Emma Watson, from a choice of two pictures. It’s hoped that examining things like how the sheep’s ability to recognise the faces changes over time may help us understand the cognitive effects of conditions such as Huntington’s and Alzheimer’s.

The researchers used sheep because they live a relatively long time — ten to 12 years on average — their brains are as complex as ours and, ‘importantly, because there are at least 16 genetic diseases caused by the same gene in sheep as in humans, including Huntington’s,’ says study author Jenny Morton, a professor of neurobiology at the University of Cambridge.

‘Cognitive decline in these conditions is very hard to measure in humans, but this study gives us a way to monitor how abilities change.’ 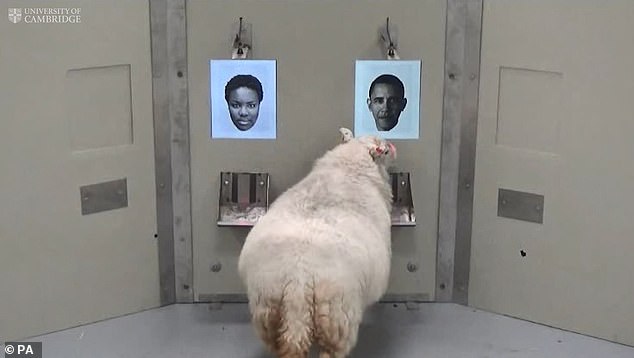 A study in 2017, published in the journal Royal Society Open Science, showed that sheep can be trained to recognise faces. To train them, the sheep were given treats when they picked the face of a celebrity, including Barack Obama and Emma Watson, from a choice of two pictures

In 2015, a team at the University of Iowa in the U.S. taught a group of pigeons to differentiate cancerous breast tissue from benign tissue on a mammogram — and in 2020 the same team published a paper in the journal Learning & Behavior explaining how they’d now taught five pigeons to spot abnormal heart scans.

Studies have shown pigeons can classify objects into groups, and the team wondered if they could also read medical scans.

The test they looked at, a Myocardial Perfusion SPECT test, measures how well blood is flowing through the heart muscle. A traceable agent is injected into a vein. Healthy tissue absorbs the tracer, damaged tissue does not — and this shows up as different colours on a scan. The pigeons were shown scans and taught to peck at two buttons — normal or abnormal. If they got their choice right, they were given food.

In time, they learned what was different about the pictures and pecked at the right one 80 to 85 per cent of the time — the same rate at which trained humans can read scans correctly.

But when they were tested with black-and-white pictures, the pigeons couldn’t differentiate between the images.

This finding is also useful. ‘The medical imaging community is constantly evaluating whether to use artificial colour to convey this type of information and which colours to use, and this study showed that adding colour helps a lot,’ says Victor Navarro, who worked on the Iowa trial but is now a research associate at Cardiff University.

‘This was never to replace human experts doing the diagnostic work, but to use the pigeons as a way of evaluating novel imaging techniques.’

A team at Emory University in Atlanta has trained dogs to lie in MRI scanners, a process that requires them to be so still that they can’t even scratch. This provides a non-invasive way to see how their brains work.

MRI provides an image of the inside of the body. It isn’t painful but it is loud, so the dogs are given ear defenders, and the team trained the dogs to get used to the sound by playing with them in the MRI room.

While the main use is to study canine behaviour, a trial in 2017 found an application for human health — trying to work out which particular animals might make a good assistance dog.

These dogs need to have a calm and easy-going temperament. Breeds such as labradors are ideal, but even then 70 per cent don’t make the grade.

In their study, published in the journal Scientific Reports, the researchers discovered dogs with more activity in a part of the brain called the amygdala, which controls excitability, were more likely to fail training if shown a treat.

The process may one day be used by charities training assistance dogs, to save time and money.