Pep Guardiola is expected to decide his Manchester City future during the World Cup, and probably over a glass or two of red wine.

Guardiola has the truncated first few months of this season, and the impact of Erling Haaland, to thank for any talk of his expiring contract taking a back seat recently. He looked exhausted two years ago, when the question of him signing or not was the only show in town.

Back then, he made the decision to stay during a November international break while on a family holiday to the Maldives, accompanied by City chairman Khaldoon Al Mubarak.

This time he is likely to head for Abu Dhabi. Clearly, life-defining decisions cannot be made in the Manchester drizzle.

Guardiola’s wife Cristina has a huge say in what happens next. She moved back to Barcelona in 2019 to manage her business and was joined by their youngest daughter, Valentina. Guardiola will need his family to remain happy with that arrangement if he is to continue at City.

The club have maintained for some time that there has been no indication either way on the 52-year-old’s plans. And Guardiola is a man who can quickly change his mind.

But there are those around the first team who believe they are working for a manager who does not appear ready to wave goodbye, with whispers of a two-year extension.

City are planning ahead on the assumption that he stays. 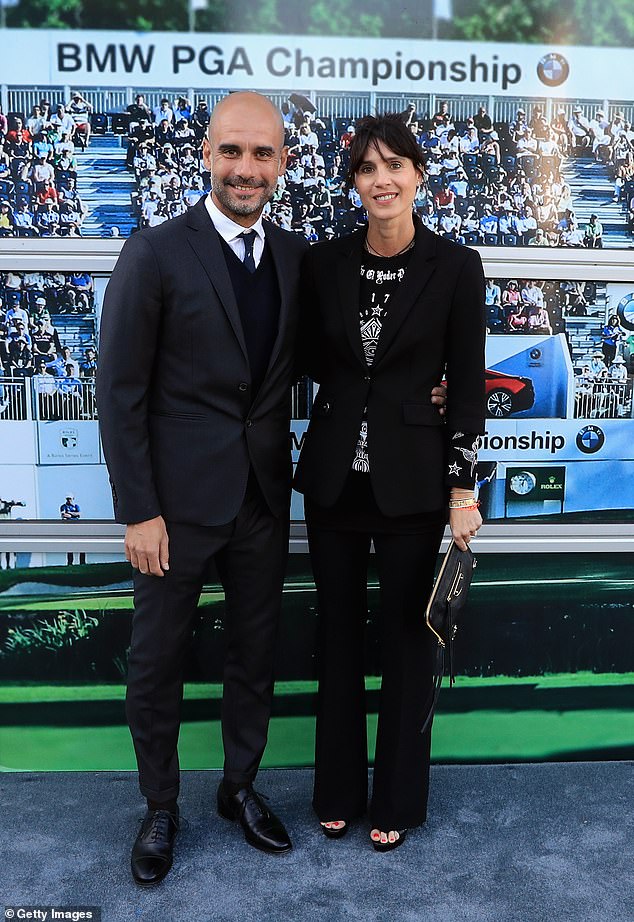 Guardiola will head for this enforced World Cup break with the wild scenes of Saturday fresh in his memory. If this team are mechanical, as is sometimes said, the machinery must be advanced to engineer such drama so regularly. A 95th-minute Haaland penalty squeezed past Bernd Leno saw 10-man City squeeze past Fulham.

The celebrations immediately after, and following the full-time whistle, evoked memories of a last-gasp victory over Southampton during Guardiola’s first title-winning campaign: the chants of Guardiola’s name from the stands during a lap of honour, Haaland dancing to No Limit — a 90s track used to serenade the Toure brothers and now adapted for the Haaland father-and-son combo.

The Etihad Stadium was feverish, as it has been for much of the season.

Kevin De Bruyne said: ‘I feel the fans are more and more behind us. There is less anxiety. Before it was sometimes edgy and they got a little anxious but they were fully behind the team. It is sometimes these games at the end of the season that you look at and they are really important.’ 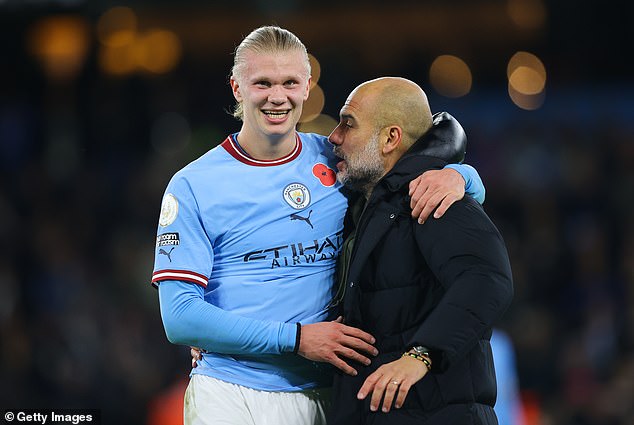 City, a man light after Joao Cancelo’s 26th-minute red card, had John Stones, Bernardo Silva and Rodri operating in two positions each and dominated the ball. Observing them navigate the situation was even more mesmeric than watching City normally. A true masterclass in chess without one of your knights. 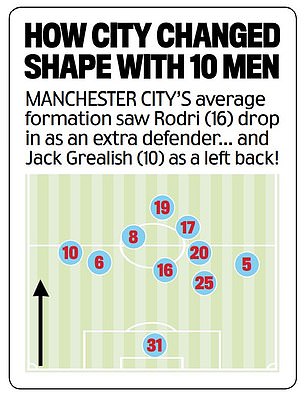 ‘I give them enthusiasm but they give it to me,’ Guardiola said. ‘I see the faces of our people, they give me the energy for the future, for Chelsea (in the EFL Cup on Wednesday) and Brentford, I cannot disappoint them, I have to be there with them. When the people support the team unconditionally it is because the players have done it many times in the toughest league.’

If Cancelo is City’s knight, then their king, De Bruyne, produced one of the finest all-action midfield displays we will see all season. Guardiola said recently the Belgian was nowhere near his best. Here was as good as it gets. ‘When Kevin is involved we are a better team, I don’t want to see the Kevin from the Champions League second leg (at Real Madrid) when he was not involved — he didn’t touch one or two balls. On Saturday he won the penalty but it was not just assists, he was there, and this is how the manager wants it. He will sleep like a baby, 100 per cent.’

City will sleep much better once they know Guardiola’s intentions. ‘I think he is more and more relaxed,’ De Bruyne said. ‘I feel there is less of an edge sometimes and it is more calm for him.’

Does De Bruyne not fancy asking him for an answer? ‘I don’t have to — everything is fine. I don’t think you can put pressure on him. We will deal with it.’