It’s hard to understand why New York sees its summer as the low season. The rich may vanish to the Hamptons, but for the rest who stay to soak up the sun in its parks and waterfront, there’s a real sense of joie de vivre in the city.

Limited flights post-pandemic mean that prices tend to be high, but there are bargains to be had. I took Aer Lingus’s new direct flight – a nice new Airbus A321 – between Manchester and JFK that launched late last year. And there was an arrival bonus, as since Covid there are no customs forms to fill in, so I arrived to a speeded-up entry process.

Once in Manhattan, it became clear that there are other pandemic-related bonuses.

‘It’s hard to understand why New York sees its summer as the low season,’ writes Sarah Turner, who jetted over on Aer Lingus’s new direct flight from Manchester to JFK. Pictured is the city’s famous skyline

New York houses some of the world’s most expensive restaurants and bars, but between July 18 and August 21 there is Restaurant Week (it has expanded to 30 days since it launched in 1992), where some of the top restaurants do bargain set menus at $29, $39 and $59 (about £23, £32 and £50). One certainly worth trying to bag a table at is Cecconi’s Dumbo in the Time Out Market, which has a superb location with a cool breeze on the waterside near Brooklyn Bridge (cecconisdumbo.com).

In July and August, bargains can be found with rooms costing from £315 per night (hoteltonight.com).

Theatre lovers also benefit. Bagging cut-price tickets to top Broadway shows used to involve queuing outside playhouses and a large dose of luck. Now the theatres have adopted digital draws, which means you can get on with sightseeing and your phone will ping you if you’re successful (todaytix.com).

Between June and September, the best-value show in New York is Free Shakespeare In The Park at the Delacorte Theater in Central Park. This year, the programme’s 60th anniversary, Danai Gurira, star of the Black Panther movie and The Walking Dead series, will play Richard III, and there’s a musical version of As You Like It (publictheater.org). 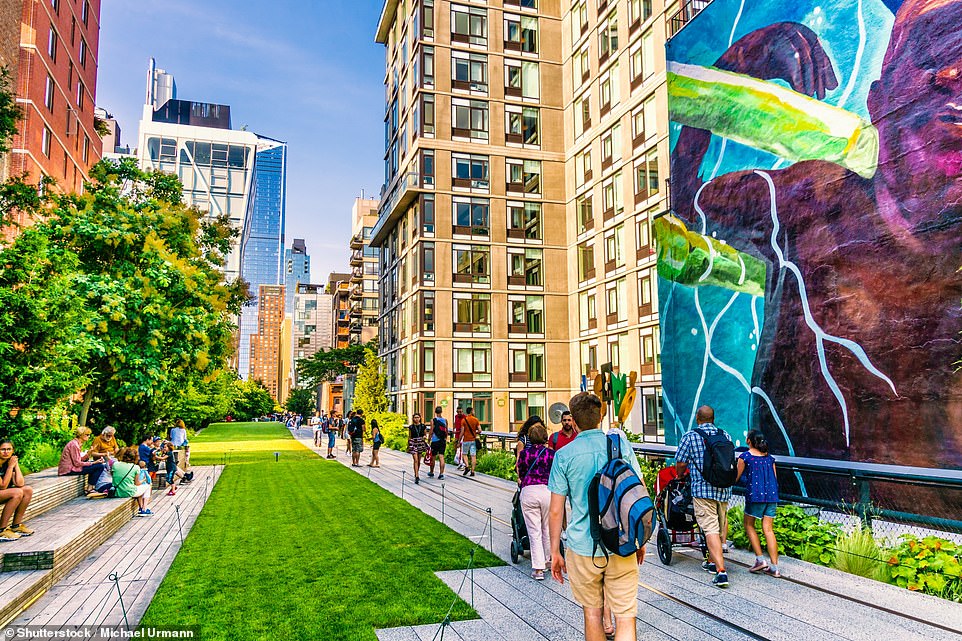 Must see: The High Line (above), a former railway line that stretches for nearly two miles between Chelsea and Lower Manhattan, mixes walkways and small parks with spots that are used to host free concerts 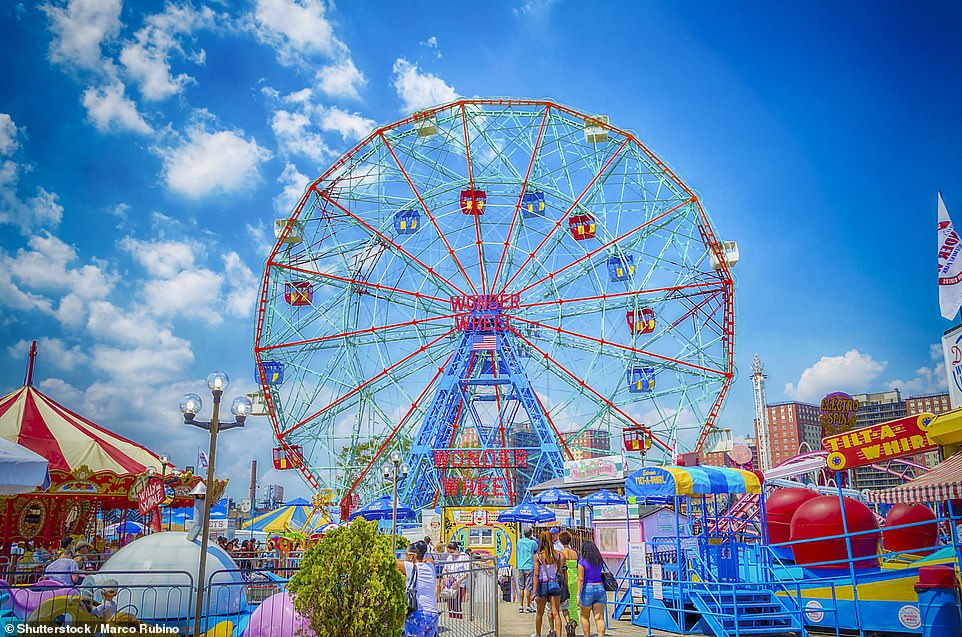 Fun of the fair: Take the subway to Coney Island for fairground rides – including its famous ferris wheel (above) – three miles of beach and an all-American boardwalk 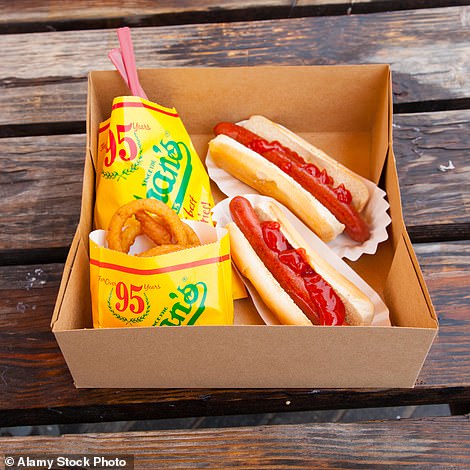 Pictured is a hot dog from Nathan’s in Coney Island, which does a ‘roaring trade’

Throughout the summer, the Wollman Rink in Central Park lets its ice melt away as it is turned into a giant roller disco. One-hour sessions start at about £20 (thediscoasis.com).

Bryant Park has a summer programme of free outdoor cultural events which don’t involve booking but which promise ample seating and free picnic blankets. But it’s perhaps the park’s movie screenings that feel most fun (bryantpark.org).

The High Line, a former railway line that stretches for nearly two miles between Chelsea and Lower Manhattan, mixes walkways and small parks with spots that are used to host free concerts (thehighline.org).

Heading to Governors Island gives even New Yorkers a sense of vacation, even though it’s only a wave away from Lower Manhattan. With picnic grounds and activities ranging from kayaking to rock-climbing, often at minimal cost or free, and plenty of history, it’s a delightfully different way to experience an outdoorsy New York. There are regular ferries from Brooklyn and Wall Street piers, costing just a few dollars (govisland.com).

For about £2 you can get to the seaside too. Coney Island is on several subway lines, including the F Express train (considered the fastest). When you arrive, Nathan’s hotdogs will be doing a roaring trade, there are fairground rides – including its famous wooden roller-coaster and ferris wheel – three miles of beach and an all-American boardwalk. On certain nights you can also catch a baseball game with the Brooklyn Cyclones. Tickets start at about £12 (milb.com/brooklyn).

When temperatures really start to rise, head into the city’s museums to enjoy air-conditioning and superb art. The big hitters include MoMA (Museum of Modern Art) and the Whitney Museum of American Art, which has a series of superb terraces at its new location in Chelsea.

Above is Little Island on the Hudson River at Pier 55 near Chelsea, which features paths, hills and a waterfront auditorium 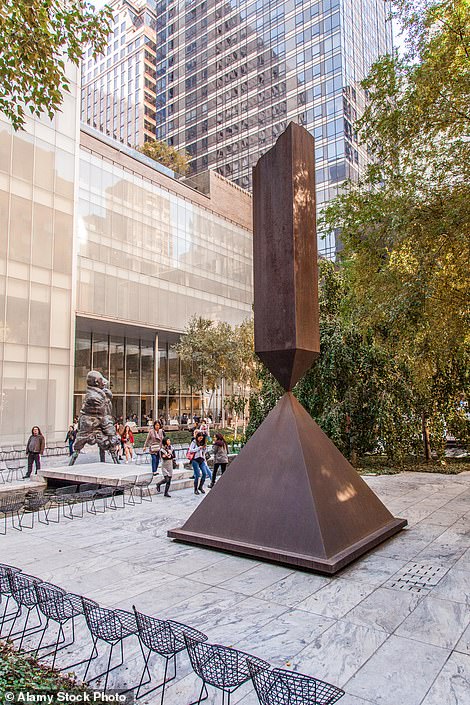 ‘Head into the city’s museums to enjoy air-conditioning and superb art,’ writes Sarah. Pictured is a sculpture at MoMA (Museum of Modern Art), one of New York’s most popular attractions

The New York Public Library has a must-see – and free – Treasures exhibition, a beautifully random collection of objects, including the original A. A. Milne Winnie-the-Pooh, Eeyore, Kanga and Piglet toys (with not a Disney logo in sight, so make sure any little ’uns know what to expect), Charles Dickens’s and Charlotte Bronte’s writing desks (one grand, one very modest), Nijinsky’s dancing shoes and other artifacts, both personal and political. It’s the perfect size for an exhibition, taking just an hour or so to get around, opening eyes, changing perspectives and feeling thoroughly New York in its expansiveness (nypl.org).

The Guggenheim is showing its vibrant collection of Kandinsky paintings until September. The museum’s cafe is a well- kept secret where you can sit outside on its terrace with a coffee and soak in the views of Central Park across Fifth Avenue, with the Dakota building beyond (guggenheim.org).

Little Island, which opened last year at Pier 55 near Chelsea, is the city’s newest public park. Designed by the British Heatherwick Studio, the 2.4-acre Teletubbies-style landscape is built on stilts into the Hudson River and features paths, hills and a waterfront auditorium (littleisland.org).

Taking to the water in New York doesn’t have to be expensive either. A Circle Line Sightseeing Cruise is part of the NY City Pass scheme, which offers cut-price entry to tourist attractions (citypass.com).

The Staten Island Ferry is also free and gets you to some great-value pizza restaurants if you jump off at Pier 76 terminal. The ferries that criss-cross the East River between Brooklyn and Pier 11 near Wall Street in Manhattan cost just a couple of dollars per trip and deliver fantastic views. And best of all, this summer should see the launch of a ferry to Coney Island too.

Whatever Covid threw at New York, this is a city that has come out on top.

Sarah Turner was a guest of Aer Lingus. Flights between Manchester and JFK start at £255 each way (aerlingus.com). Double rooms at the Conrad start at £427 per night (conradnewyorkmidtown.com).