Every dressing room must have one: The figure of fun, the easy target, the butt of all jokes.

For some time at Manchester United, Fred has been the most likely candidate.

In 2019, he was reportedly mocked by his United team-mates after arranging his wedding to coincide with pre-season because he’d assumed Brazil would pick him for the Copa America the previous month. 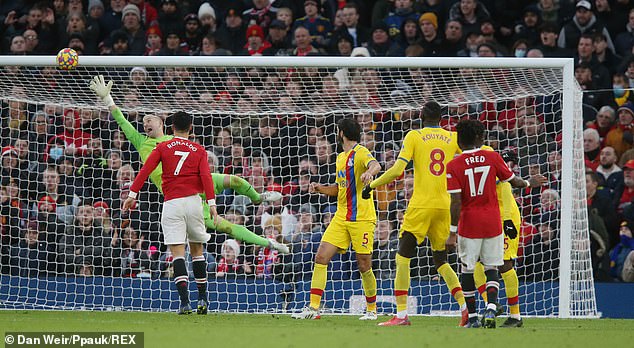 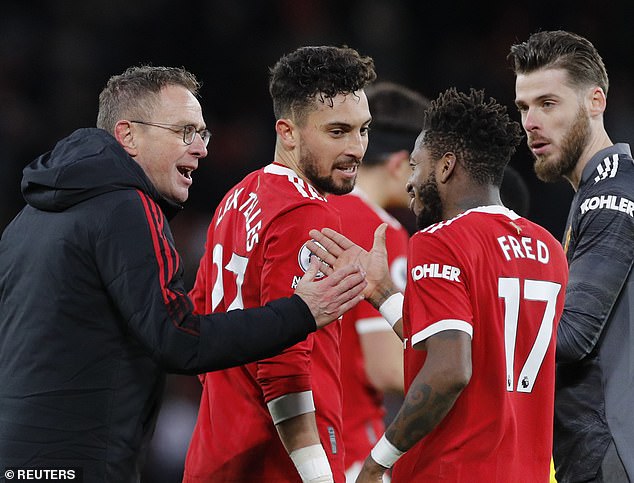 Fred didn’t make the squad because of poor club form and then had to plead with manager Ole Gunnar Solskjaer to get the time off for his July 14 nuptials. He wasn’t allowed to forget about it.

Then there’s social media, where the midfielder has long been one obvious scapegoat as United lurch from one disaster to another.

A few months back, someone started a Twitter thread with the question: ‘What’s that one thing you bought but have no idea why?’ Someone replied ‘Fred’ and racked up the likes.

And what about the £52million man’s shooting ability. A clip of Fred narrowly missing a chance against Chelsea last season went viral because TV cameras instantly cut to Solskjaer’s reaction on the touchline. 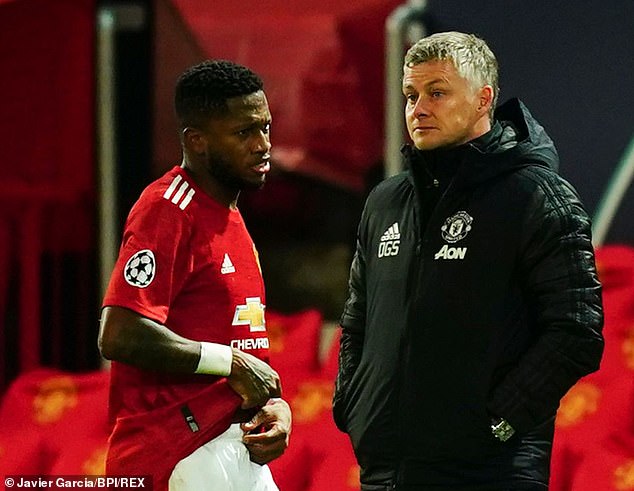 The Norwegian stood there with a beaming grin on his face, applauding enthusiastically before giving the thumbs up. A smile duly spread across Fred’s lips.

Was this what modern Manchester United has become? Expressions of delight at missed shots.

It was more that most of Fred’s previous attempts had threatened row Z. This one was actually quite close.

The perception of Fred fluctuated from expensive flop and an unwanted relic of Jose Mourinho’s reign to someone who tries hard but ultimately wasn’t anywhere close to United standard.

The lingering memories have been of Fred being brushed off the ball too easily, giving it away to opponents, committing needless fouls or generally not quite being good enough. 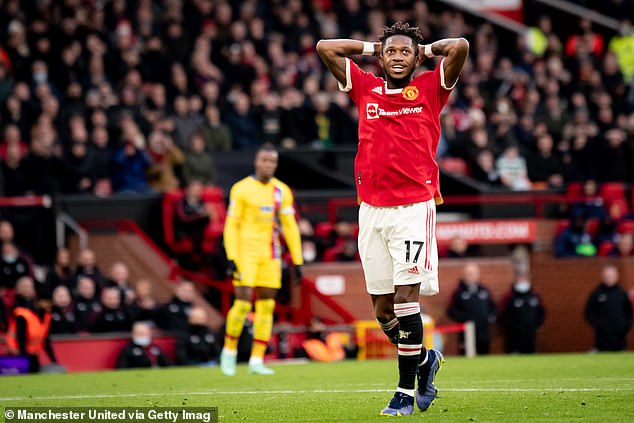 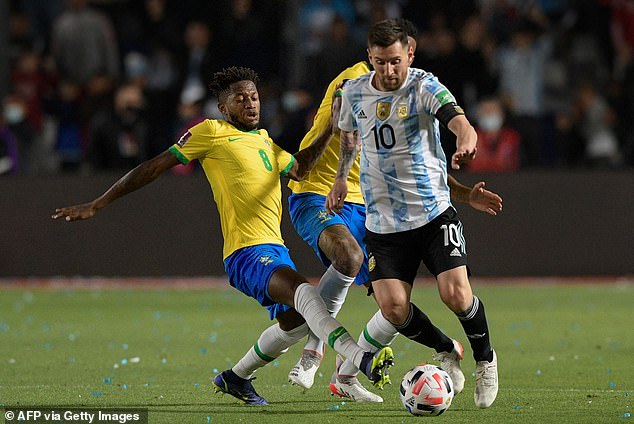 Yet in that same time, Fred, seen here challenging Argentina’s Lionel Messi, has established himself as first choice in Brazil’s midfield 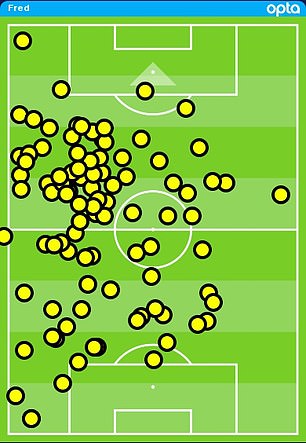 Where Fred touched the ball against Palace

But, finally, things might be changing in Fred’s favour. In Ralf Rangnick, United suddenly have a coach who values high work rate and hard pressing above anything else.

Fred – who knows how to be a real nuisance to opponents, buzzing around and not allowing a moment’s peace – could well prosper.

His spectacular winner against Crystal Palace on Sunday, which capped a display of endeavour and attacking intent, could be the start of his redemption in a red shirt.

That’s not to say that Fred has suddenly become the perfect midfielder overnight but Rangnick’s demands of his players could work in his favour.

The Brazilian is one of several United players given greater licence to push forward and exert pressure under the new interim coach. 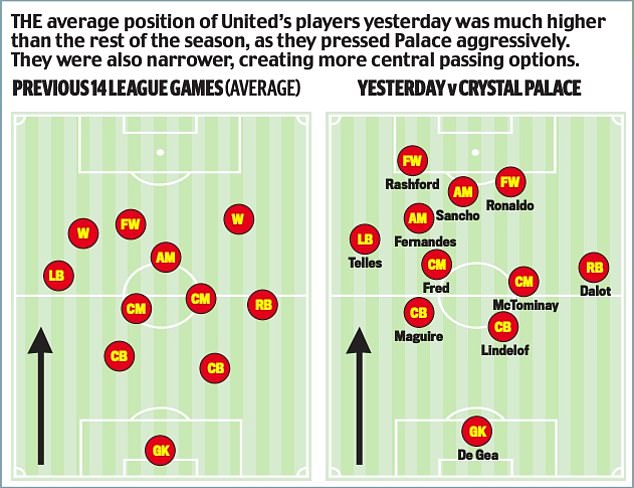 Every outfield member of the side had an average position higher up the pitch against Palace compared to the previous 14 league games. Fred’s was 10 yards inside the Palace half whereas ordinarily it would be in his own half.

On more than one occasion, he ghosted unmarked to the edge of the Palace box, a tactic that paid off handsomely with his well-taken breakthrough goal 13 minutes from time. 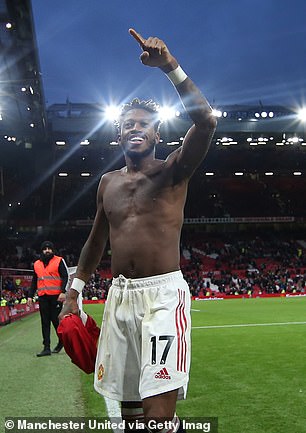 Solskjaer was guilty too often of taking a belt and braces approach in midfield, even against opposition United could easily overwhelm, with Fred, Scott McTominay and Nemanja Matic kept on the leash.

As we saw from the energy of Marcus Rashford, Jadon Sancho and even Cristiano Ronaldo on Sunday, United will now press from the front.

Fred will be expected to be a big part of that, doubling up on opponents as they try and pass their way out of defence, hustling them into mistakes and taking full advantage.

We saw a good example even before Rangnick started. It was Fred’s pressing of Etienne Capoue that led to Ronaldo chipping home the opener against Villarreal last month.

Palace were certainly flustered more than once as United roared out the blocks at Old Trafford on Sunday. As Man City, Chelsea and Liverpool have found out, goals come from forcing mistakes.

Michael Carrick, who took charge of that Villarreal game and has now left the club having started under Mourinho, came to Fred’s defence recently.

‘It gets overlooked he is first choice in a good Brazil team – that shows how far Fred has come since he came to the club and how much he’s improved,’ said Carrick.

‘I really like him and one of the biggest things that maybe people don’t see is the attitude. His desire to be a team player, desperate to put himself out there to play games. 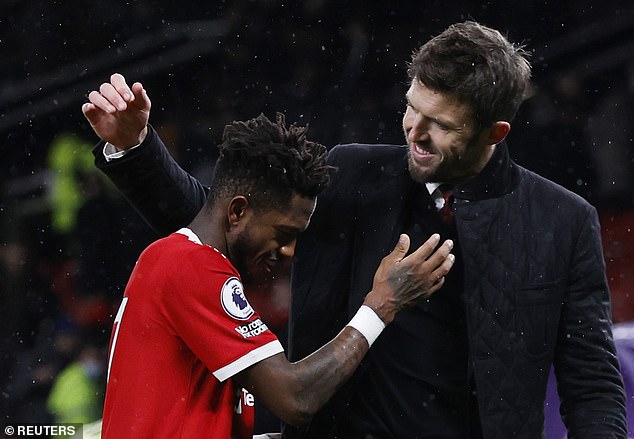 Michael Carrick, who served on the coaching staff under Mourinho and Solskjaer, spoke about Fred’s improvement since arriving at United

‘That mentality is infectious. He’s improved an awful lot and brings a great energy to the team.’

You might argue that 137 games into his United career, it would be pretty shocking if there hadn’t been any improvement.

But many found it incredibly hard to believe how someone so often ridiculed when playing for United had become first choice for Brazil since that 2019 snub.

Fred started all but one of their games at this year’s Copa America though was taken off at half-time during the final with Argentina having been booked just three minutes in.

He will be at the World Cup in Qatar, playing for one of the most fancied teams to win the whole thing. That can take a bit of getting your head around.

But at least Fred now looks more comfortable when playing for his club. Diogo Dalot described him as ‘the underdog’ after his winner against Palace.

‘Everybody can criticise him but he keeps his head clear and goes on the pitch, every game he gives everything that he has, and that’s what this club is about,’ he said.

And for all his faults, maybe that is precisely what Man United need right now as they scramble to salvage their season. The much maligned, much mocked Fred could yet have the last laugh.