American novelist Thomas Wolfe noted in his 1935 work Of Time And The River that the baseball World Series regularly coincides with the ‘furious apogee’ of an election, with its ‘speeches, accusations, dire predictions and impassioned promises’.

Both events, Wolfe wrote, ‘gave the average American a thrill of pleasurable anticipation. It was the desire of a man to see a good show, to “take sides” vigorously in an exciting contest . . . but not to be too deeply troubled or concerned by the result’.

What a difference 90-odd years can make. For according to President Joe Biden, today’s midterm elections are not between the Democrats and Republicans, but between democracy itself and ‘an extremism that threatens the very foundations of our republic’.

Speaking in Philadelphia in early September, he was, of course, referring to Donald Trump’s ‘Make America Great Again’ band of red-hat-clad supporters.

Last week, Biden returned to this theme during a speech in Washington. Drawing on the recent attempted kidnapping of congresswoman Nancy Pelosi and the assault on her husband, Paul, the President pointed to what he called ‘a cycle of anger, hate, vitriol and even violence’ fomented by Trump.

‘Democracy itself’, therefore, is ‘on the ballot’, he declared. And on the other side are ‘dark forces and thirst for power’.

Biden’s narrative, however, is rather derailed by the fact that David DePape — the man who invaded the Pelosis’ home — is a Canadian citizen who entered the U.S. from Mexico in 2008 as a temporary visitor.

He is, in other words, an illegal immigrant. A pro-nudity activist and ‘hemp jewellery maker’, DePape is more a devotee of Burning Man than a follower of the Orange Man.

I shall never condone Trump’s conduct on January 6 last year, when he incited violent attacks on the Capitol Building. And it is certainly disturbing that there are more than 300 candidates seeking elected office this year who still believe that the 2020 presidential election was ‘stolen’.

Yet there is very little sign that existential threats to democracy count among key issues in the minds of most voters. Viewed dispassionately, these midterms are, in fact, entirely normal. According to President Joe Biden, midterm elections are not between the Democrats and Republicans, but between democracy itself and ‘an extremism that threatens the very foundations of our republic’.

Indeed, it would be very surprising if the Republicans didn’t win back the House of Representatives this week. After all, the presidential party has gained congressional seats in just three modern midterm elections (1934, 1998 and 2002).

In past midterms, far more popular presidents than Biden have suffered major defeats in the House. The Republicans even lost seats in 1986, when Ronald Reagan’s approval rating was 63 per cent (Biden’s is 42 per cent).

Today, Democrats also have one of the smallest House majorities in modern history: Republicans need just five seats to topple them. They will do much better than that.

And that’s because, while Democrats keep shouting about threats to democracy and abortion rights, Republican messaging has consistently focused on voters’ top priorities: inflation, crime and immigration.

In one October poll, nearly half of voters named inflation as an ‘extremely important’ issue, up from 37 per cent in September.

True, growth was at 2.6 per cent in the third quarter this year. But with inflation still at its highest since January 1982 — it’s been above 8 per cent since March — the economy doesn’t feel good to most Americans. Violent crime is also close to the elevated levels we saw in the wake of the Black Lives Matter protests in 2020. 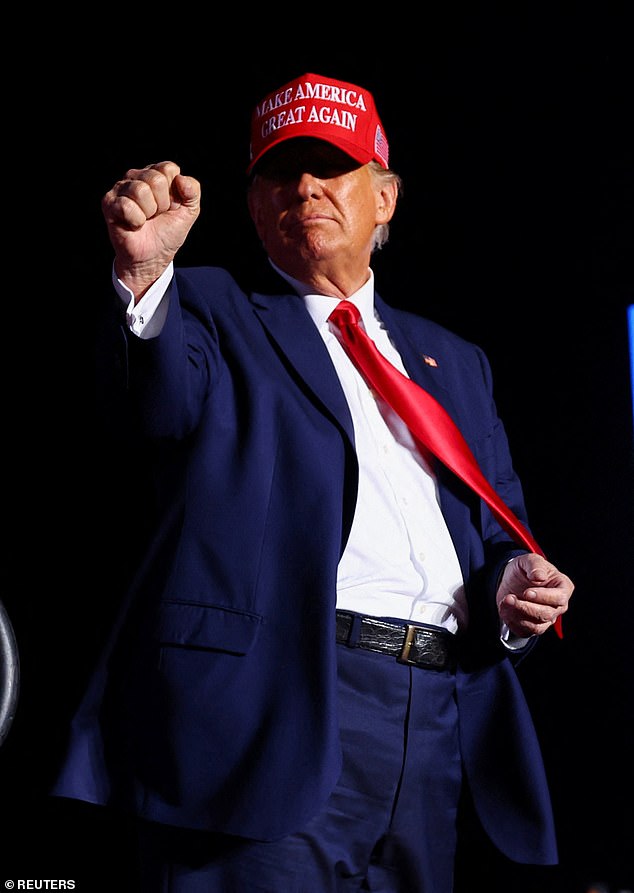 If you believe the Biden narrative, the answer is that they will begin earnestly working to secure the re-election of Trump

And illegal immigration across the Southern border, meanwhile, is rampant. There have been 2.4 million ‘encounters’ between Customs and Border Protection officers and people trying to cross the Southwestern border in the past 12 months, up from 1.7 million in the previous year. (There were just 459,000 in 2020 and 978,000 in 2019.)

That people find these issues important should not be a surprise. ‘It’s the economy, stupid’ — as it almost always is — plus law and order, and secure borders.

In the Senate contests, too, there is nothing especially unusual going on, as Republican candidates have gained significant ground over the last month. To win the Senate majority, Republicans need to win at least two of Nevada, Georgia and Pennsylvania. Even with some seriously flawed candidates, they look set to do that.

By the end of this week, then, America will likely find itself all the way back in 2017, with Republicans once again in control of both houses of Congress.

The big question is what the Republicans will do with this new power.

If you believe the Biden narrative, the answer is that they will begin earnestly working to secure the re-election of Trump.

However, that doesn’t marry with the fact that Trump was a large part of the reason the Republicans lost not only the White House but also the Senate in 2020. 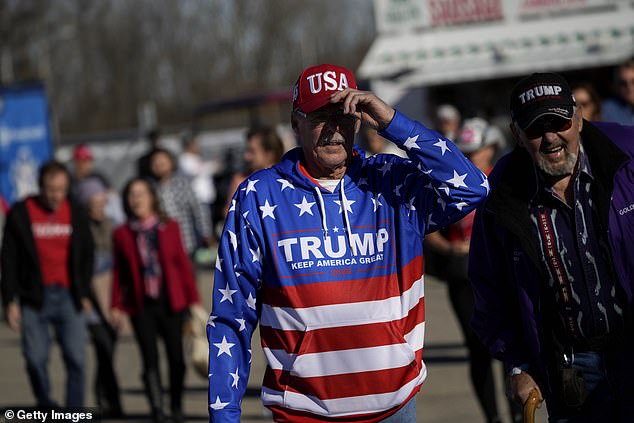 : Supporters of former U.S. President Donald Trump arrive for a rally at the Dayton International Airport 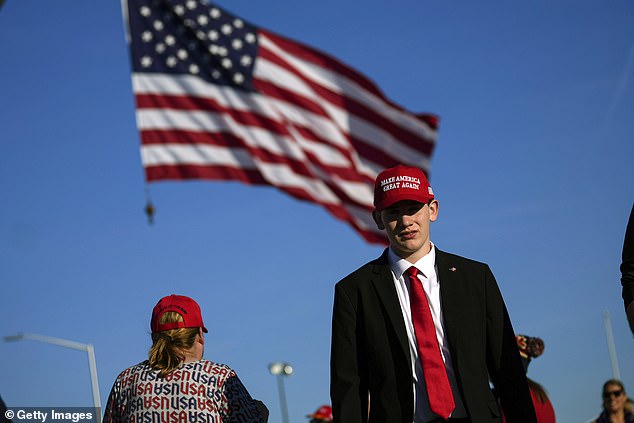 Indeed, big beasts Mitch McConnell and Kevin McCarthy, who will lead the Republicans in the Senate and House, respectively, would much rather Donald Trump did not run in 2024. Though they stop short of saying as much publicly.

Will he get the nomination? Quite likely. I doubt Ron DeSantis — the popular Republican Governor of Florida whom Trump dismissed as ‘Ron DeSanctimonious’ on Saturday — will risk running against him. Much better he waits and consolidates his position as the heir apparent, as Reagan did with two terms as Governor of California from 1967 to 1975.

And will Trump get re-elected? I wouldn’t bet against it.

Realistically, the Democrats have no viable candidate. Biden — 80 later this month — is manifestly senile. And his hapless Vice President, Kamala Harris, would clearly be unelectable even if only her own staff got to vote.

Biden picked her as his running mate not as a plausible successor but as a sop to the progressive wing of his party.

Yes, she is indeed a ‘woman of colour’. Unfortunately she is also a politician of no talent — and she has since sunk without a trace.

By this time next year, Americans’ finances will be in even worse shape than they are now and voters will increasingly be nostalgic for Trump’s economy (full employment, inflation below 2 per cent), not to mention his foreign policy. 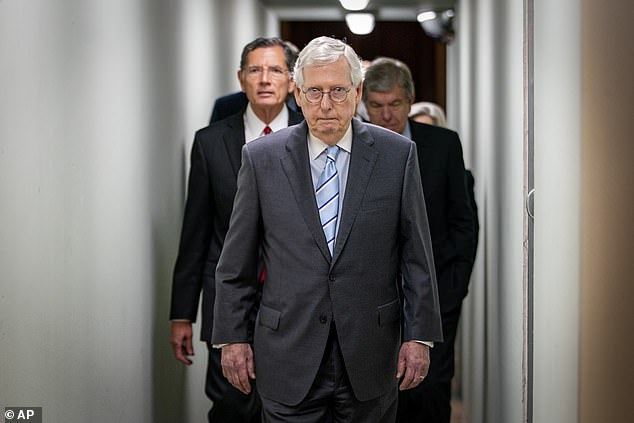 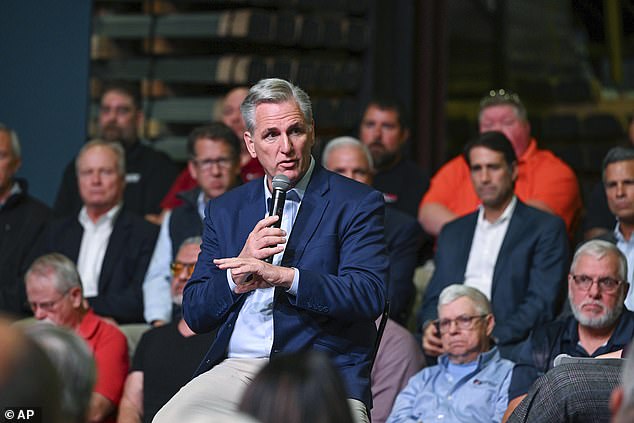 Meanwhile Kevin McCarthy, who will lead the Republicans in the House, would much rather Donald Trump did not run in 2024, but will not say so publicly

Trump was not wholly unconvincing when he argued earlier this year that Russia would not have dared invade Ukraine on his watch, and that China would be equally unlikely to risk an invasion of Taiwan with him back in the White House.

Of course, if he returns to the White House, liberals will insist America is doomed. Ironically, the Democrats may themselves revert to being the election deniers (as many of them were in 2016, when Trump first won). No doubt there will be mass protests (as in 2017 and again 2020).

But a civil war? I doubt it.

A president barred by the 22nd Amendment from seeking a third term is always in rather a weak position. The race to succeed Trump would begin even before Inauguration Day.

For sure, The Donald 2.0 would begin his second term ready to wreak vengeance. He has a lot of scores to settle. But restraint would come from the Republican establishment, who would not want to see their chosen successor to Trump damaged ahead of 2028.

As for tomorrow, when the results start to pour in, Democrats would do well to reflect on their mistakes. For most Americans, the future of democracy itself has never really been on the table.

The truth is, Americans love democracy the way they love baseball. They’re not about to give up on either sport.

Niall Ferguson is the Milbank Family Senior Fellow at the Hoover Institution, Stanford. He is a columnist with Bloomberg Opinion and the author of Doom: The Politics Of Catastrophe (Penguin).