Many longstanding credit card customers of John Lewis are indignant after being told their credit limit will be slashed by up to 96 per cent.

A number of cardholders have aired their grievances on review website Trustpilot and Twitter. In some instances, cardholders have been told they will no longer be able to use their card after the end of October.

The backlash comes a fortnight after John Lewis confirmed it had appointed finance company NewDay to replace HSBC to manage its card. NewDay has five million customers and is the provider behind Amazon’s credit cards.

Switch: Finance company NewDay will manage the John Lewis card instead of HSBC

John Lewis cardholders have been told they can keep using their old cards – which earn them rewards to spend in the department store and Waitrose – until 6pm on October 31. To remain a customer after this date, cardholders must reapply and be approved.

Retired Stephanie Buchanan, 69, from Suffolk, has had a credit card with the retailer for 16 years and ‘is less than impressed’ by being asked to reapply.

‘However they wrap it up, they’re asking me to apply for a new credit card,’ she says. ‘I would never open a new account with a company I’ve never heard of, especially after the reviews I read about NewDay were universally awful.’

NewDay has been around for 20 years and says it is one of the UK’s largest providers of consumer credit. Its brands include Aqua and Bip – and it has partnership agreements with Argos as well as Amazon. The deal with Amazon is due to end in January.

Stephanie, who shops at the Waitrose store in Bury St Edmunds, asks: ‘What are John Lewis playing at?’

Others have been equally critical. Cardholder Garth Pollard left a review on Trustpilot saying NewDay had offered him half his previous credit limit. ‘I have a very high credit rating and pay off [my card] in full each month,’ he said. ‘There has been no change in my financial situation. I cannot believe they are treating loyal customers in this way.’

Sue Falkner also complained, saying she has always paid her card balance in full and has never had any credit issues in the past. ‘A paltry £250 credit approval given against the £7,000 I have currently. What a joke,’ she wrote.

Another customer, David, wrote that NewDay had rejected him for a new card and ‘couldn’t offer any explanation.’

‘Potentially this leaves me without a credit card, since the general advice is not to apply for a new card if you’ve been declined in the last 30 days,’ he added.

NewDay told The Mail on Sunday: ‘The overwhelming majority of customers transferring to the new John Lewis credit card are being offered the same or a higher credit limit.’

It said the interest rate on uncleared balances would remain the same as applied by HSBC – 18.9 per cent. 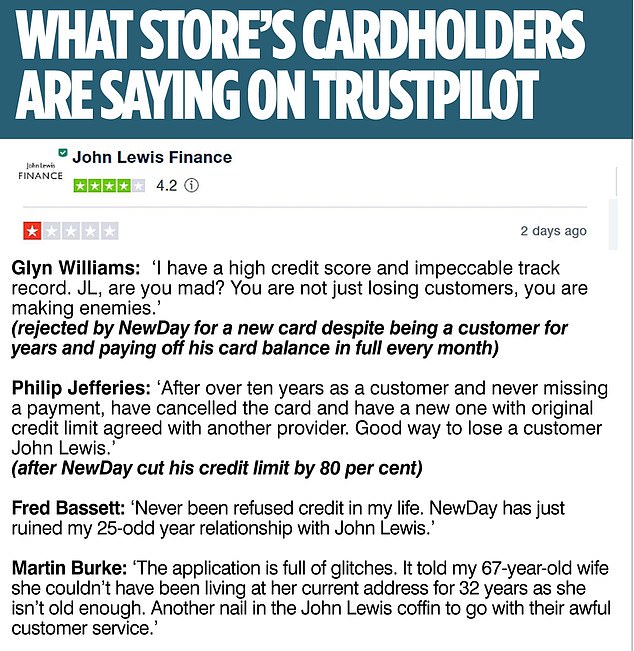 NewDay added: ‘Applicants are assessed based on their current affordability and creditworthiness, in line with industry best practice and Financial Conduct Authority requirements. If there have been any recent significant changes to a customer’s financial situation, it may mean they wouldn’t qualify for the new card.’

Trustpilot does carry positive reviews for NewDay, with 52 per cent of submitted reviews ranking the company ‘excellent’ – compared to 31 per cent who rank it ‘bad.’ John Lewis claimed that feedback from the vast majority of its card customers had been ‘extremely positive.’

It said: ‘We’re very proud of our Partnership credit card and we’re working incredibly hard to address issues raised by less than one per cent of customers.’

Customers who have concerns about their partnership card can contact the John Lewis customer services team on 0345 300 3833. Lines are open 8am until 8pm, seven days a week.