The collapse of a major Chinese property developer is a ticking time bomb for Australia’s biggest export and government revenue, experts warn.

Evergrande is drowning in debt and failed to meet $110 million in annual interest payment obligations due this week.

Credit ratings agency S&P Global now fears it is on the verge of defaulting, and expects Beijing to let it go under.

Unless the Chinese government steps in with a rescue package, the collapse of China’s second biggest property developer would have huge economic implications for Australia, starting with iron ore prices halving in just two months.

A plunge in commodity prices hits Australians in the hip pocket as state and federal governments lose tax revenue and have less to spend on services.

The collapse of a major Chinese property developer drowning in debt is a ticking time bomb for Australia’s biggest export earner, iron ore, and government revenue. Evergrande has failed to meet $AU110million in annual interest payment obligations due this week (pictured is an Evergrande housing complex at Guangzhou in southern China)

Why the Evergrande collapse hurts Australia

China in 2020 bought 63 per cent of the world’s global iron ore supply.

Australia supplied 39 per cent of this commodity.

Evergrande’s potential collapse is occurring as China cuts back on steel production for environmental reasons.

This feeds into a fall in iron ore prices which in turn threatens Australian government revenue.

Even before Evergrande’s debt crisis sparked fear on financial markets, China had already ordered cutbacks in steel production as part of an effort to meet climate change targets.

China’s glut of apartment towers created ‘ghost cities’ and the demolition of unfinished buildings means less demand for iron ore, which is used to make steel.

A collapse in iron ore prices would have disastrous implications for Australian government revenue.

When the federal budget was unveiled on May 11, iron ore prices were at US$215 a tonne but a hypothetical treasury ‘sensitivity analysis’ calculated that an immediate fall to $US55 would wipe $8.3billion from tax collection in 2021-22.

So a fall, so far, of US$115 in four months has likely wiped $6billion from government tax revenue.

Evergrande has debts of more than $400billion, or a level more than twice Australia’s budget deficit of $161billion during the last financial year.

S&P Global on Tuesday night sparked a bigger sellout in Evergrande shares, to decade lows, after it predicted the Chinese Government would decline to save the property giant.

‘We believe Beijing would only be compelled to step in if there is a far-reaching contagion causing multiple major developers to fail and posing systemic risks to the economy,’ it wrote in a report. 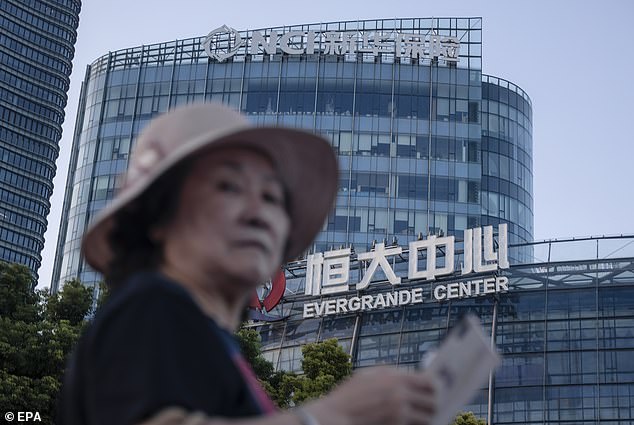 Leading credit ratings agency S&P Global now fears it is on the verge of defaulting, expecting Beijing to let it go under (pictured is the Evergrande Centre in Shanghai)

‘Evergrande failing alone would unlikely result in such a scenario.’

In December last year, iron ore prices soared to record levels above US$170 a metric tonne as China bought 63 per cent of the world’s global supply of iron ore.

This was more than double Brazil’s output of 387million tonnes, or 17 per cent of the world’s iron ore, as the South American supplier continued to suffer from the 2019 Vale tailings dam collapse.

Since the early months of the pandemic in 2020, iron ore has been immune to China’s sanctions on Australian exports.

Beijing instead targeted wine, lobster, lamb, beef, timber, and cotton as revenge for Prime Minister Scott Morrison calling for an inquiry into the origins of Covid.

Iron ore prices climbed above US$200 a tonne in May and remained at those elevated milestone levels as recently as July 29. 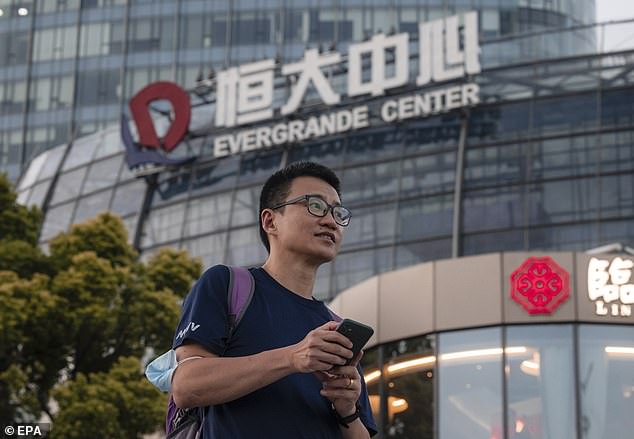 S&P Global sparked a bigger sellout in Evergrande shares, to decade lows, after it predicted the Chinese government would decline to save the property giant (pictured is the Evergrande Centre in Shanghai)

But in less than two months, the spot price of iron ore has halved, sinking to just US$100 on Sunday.

Western Australia in its 2021-22 budget announced a surplus of $2.8 billion as its counterparts in Canberra and other states braced for a string of deficits from Covid lockdowns.

WA’s Labor government put that surplus down to ‘a higher than assumed iron ore price and stronger than expected taxation collections as a result of the rebounding state economy’.

It didn’t expect iron ore prices to fall back to US$121 until 2022, which potentially puts Premier Mark McGowan’s surplus at risk as state government revenue falls. 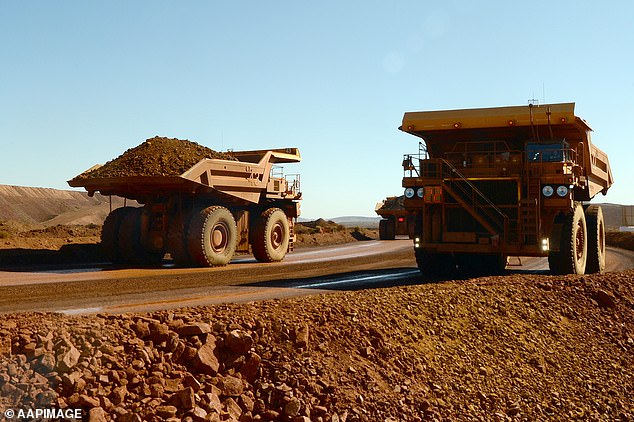 Unless the Chinese government stepped in with an Evergrande rescue package, the collapse of China’s second biggest property developer would have huge economic implications for Australia, with iron ore prices halving in just two months (pictured are Rio Tinto dump trucks at its Angelos iron ore mine in Western Australia’s Pilbara region)

‘The recent strength in key commodity prices, particularly iron ore, has seen a significant resurgence in Australia’s terms of trade and has supported profitability in the mining sector, the benefits of which will flow through to the broader economy,’ it said.

It expected nominal economic growth, before inflation, to grow by a healthy 3.5 per cent in 2021-22, but a fall in iron ore prices potentially jeopardises that.

‘While we think the government doesn’t want to be seen as engineering a bail out, we expect it to step in to conduct a managed restructuring of the firm’s debt to prevent disorderly debt recovery efforts, reduce systemic risk, and contain economic disruption,’ he said.