From a ‘spaceship’ hotel to the source of the Blue Nile, exploring Ethiopia and finding out just why it is the eighth wonder of the world

By Jane Bussmann For The Mail On Sunday

Until recently, Ethiopia was seen as a destination for backpacking hippies and Bob Geldof. We were missing out on an eighth wonder of the world in the fantasy cathedrals of Lalibela, a history-changing Second World War battle fought in an Arthurian castle, landscapes out of Tolkien and wildlife you won’t see anywhere else on the planet.

Ethiopia has transformed: free hospitals, 50 per cent of the cabinet are women and affordable internal flights let you hop from lush landscapes to tropical resorts in under an hour.

You can stay in five-star hotels or comfortable guesthouses, and the unusual experiences on offer are perfect for anyone bored with predictable holidays.

We travelled with Exclusive Ethiopia, run by British holiday specialist Tamara Britten and Ethiopian expert Mulugeta Ababu. They create holidays to your budget, provide trusted guides or personally escort you. Tamara is also a fully qualified yoga instructor. I snaffled private sessions at each exotic location and even sorted my dodgy back.

Our tour began on a hill above Addis Ababa. Gentle polo ponies carry you to Washa Mikael, a romantic ruined church carved into the mountain more than 700 years ago.

At the palace of mischievous Emperor Haile Selassie, now a museum, Mulugeta swept us back to a royal party in the 1940s. Selassie had invited international dignitaries, then set his pet lions loose in the dining room.

We had an excellent night’s sleep at the Elilly hotel in the city and later feasted on spicy fish tibs at the Safari Lodge in Adama, under Africa’s most unique hotel room – it’s shaped like a spaceship.

The next day we had fresh guava cocktails overlooking a palm-fringed lake and a swim in an infinity pool at Haile Resort Hawassa, owned by the greatest long-distance runner in history, Haile Gebrselassie.

The rarest wolf on Earth – one of just 400 – came and had a good look at us on the Sanetti Plateau, an extraordinary moonscape that smells, bafflingly, of maple syrup.

The ultimate destination for birdwatchers and gardeners is Bale Mountain Lodge, which teems with endangered species. Here you can fall asleep in your own treehouse to the sound of nearby waterfalls. 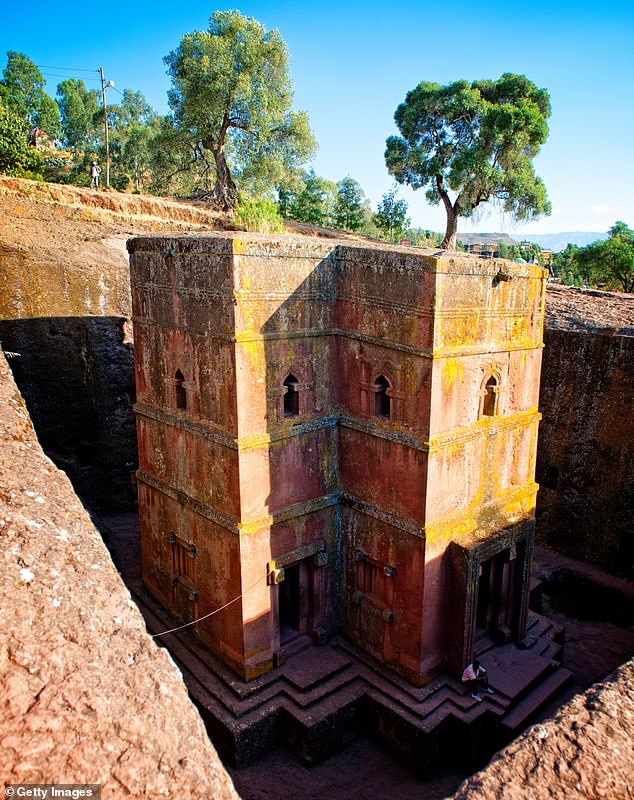 Hewn from rock: One of the extraordinary churches at Lalibela

A night at the Sheraton Addis was reliably excellent, and we grabbed the best French pastries outside Paris for our one-hour flight to the bougainvillea-lined boulevards of Bahir Dar. Kuriftu resort on Lake Tana could grace a Bond movie, with a private cave and petal-strewn four-poster bed. We stepped on to a boat to find the source of the Blue Nile. It’s a view from a lost time: fishermen in bamboo canoes drifted past hippo ears wiggling in the water.

We walked through a coffee plantation to the 14th Century monastery Ura Kidane Mihret. Glorious Technicolor floor-to-ceiling paintings show Ethiopia’s version of the Bible: black angels protect a black baby Jesus. And do not miss an alternative reality experience – Awra Amba is a village that believes in being nice. I expected to find some grumpy hippies grinding corn at the roadside. Instead, the village is made up of dozens of modern families who look after elderly folk and anyone who has fallen on hard times. They fund the care by selling woven houseware that wouldn’t look out of place on Grand Designs. You can stay here for £6 a night.

The town of Gondar hosted what must have been the most surreal battle of the war. Tommies found themselves fighting like knights in medieval-style castles, alongside the legendary Ethiopian irregular forces. They were known for such pranks as carrying raw beef to eat over slain bodies to scare the enemy into thinking they were cannibals. It worked – the Fascists crumbled.

For a holiday to tell your grandchildren about, see Lalibela, though they might think you’re making it up. The first European visitor 500 years ago wrote: ‘I am wary of writing about these buildings because it seems to me that I shall not be believed.’

When Muslims took over Jerusalem’s holy city in 1187, King Lalibela, a brilliant engineer, came up with a fantasy – his own Jerusalem up a hill in Africa. His ornate cathedrals are mind-blowing.

Hotel Maribela offers beautiful rooms – ours had epic views over the valley. We ended with sundowners in Ben Abeba, a restaurant shaped like floating flowers. It’s the creation of Lalibela native Habtamu Baye and hilarious Scot Susan Aitchison, who invented a culinary masterpiece that deserves its place in the cradle of mankind. If you try one Ethiopian scotch egg before you die, make sure to try it here.

Exclusive Ethiopia (exclusiveethiopia.com) offers a seven-night tour of the north of the country from £1,750pp; an eight-night trip to the Omo Valley from £1,670pp; and four nights in the Bale Mountains from £1,760pp.