‘The stains just faded away’: Why dishwashing detergent could be your secret laundry weapon against stubborn dirt and grime

An Australian mum has shared a simple cleaning trick she now uses to remove stubborn stains from dirty laundry.

The Queensland woman shared two images to a popular cleaning Facebook group where she revealed she uses dishwashing liquid and washes socks by hand rather than using Napisan detergent.

The two photos showed a dirt-stained baby sock that the mum had attempted to clean in the washing machine, and the other showed the same sock perfectly clean after the use of dishwashing liquid and a scrubbing brush. 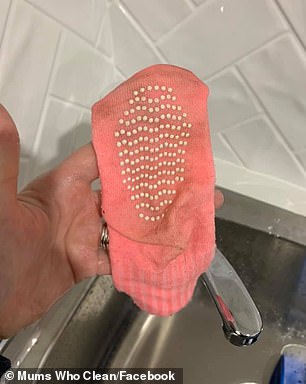 An Australian mum has shared a handy laundry tip she uses to remove stubborn stains from her children’s clothing. Rather than using Napisan washing powder, she used dishwashing liquid to hand wash her daughter’s socks

Should you use dishwashing liquid to clean clothing?

‘In a pinch, you can use some dish washing liquids for hand washing delicate fabrics, but it’s probably better to use a laundry liquid specifically designed for that purpose,’ they advise.

According to Good Housekeeping, ‘blotting a dinner stain with a little dish liquid and water is a great way to help banish it before it sets – but stop short of using this trick on delicate fabrics.’

It’s also advised to avoid dish liquid in the washing machine as it will cause a ‘deluge’ of suds and could damage the machine and the clothes.

‘First picture is of my daughter’s sock that has been put through the washing machine on soak cycle with Napisan and washing powder,’ the mum said online.

‘Thanks to a daycare mum, she advised to ditch Napisan and stain remover products and use dishwashing liquid!’

‘Second picture is what it looks like after using dishwashing liquid and a scrubber for one minute,’ she said.

The mum was shocked at the result and said she never knew a cheap alternative product would work so well.

‘I actually enjoyed doing laundry tonight and seeing the stains from my daughters clothes fade away,’ she said.

The post quickly received more than 1,700 likes and 500 comments from impressed mums.

‘Omg! I need to try this. I’ve have some stubborn stains in some of my boys clothes and nothing has worked,’ one mum said.

‘Impressive, I would have thrown [the socks] out,’ another said.

Other mums said they have known about the simple cleaning hack for years.

‘Dish washing liquid is amazing and really good for scrubbing the shower too!’ one mum said.

‘Yep! You’ll save so much money just using the basics,’ another said, a third added: ‘I’ve been doing that for years, it’s the best!’