EXPRESS INFORMER > News & Politics > ‘Why didn’t she get out of the way?’: Cyclist smashes into wife at finish line as she took photos

By Natalia Penza And Adam Solomons For Mailonline

This is the harrowing moment a professional cyclist wins a sprint finish – only to smash into his wife seconds later as she took photos of him crossing the line first.

Luis Carlos Chia didn’t even have time to celebrate his triumph in the third stage of the annual cycling race the Vuelta a Colombia before the high-speed crash.

TV commentators picked up on the collision immediately.

But they only found out afterwards that the woman knocked out by the yellow jersey road racer was Luis’s wife. 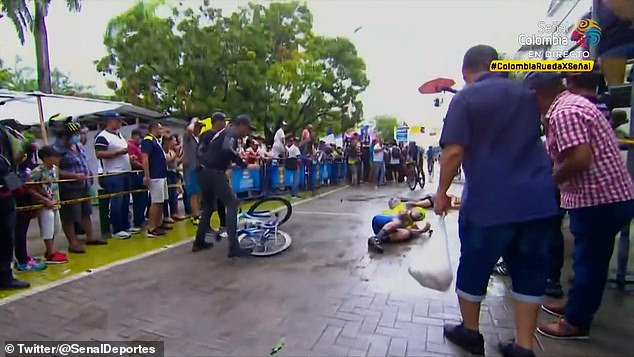 Claudia was pictured unconscious while Luis limped away with his injuries

Live footage showed Claudia Roncancio lying open-eyed and apparently unconscious on the hard concrete behind the finish line as her injured husband was helped off his bike and limped away.

The crash didn’t stop him continuing in his quest to win the prestigious event, first held in 1951 as an idea of Englishman Donald W Raskin and a few of his friends to emulate the famous Tour de France.

But Claudia, a cyclist-turned photographer who now travels with her husband and records his cycling successes, was taken to hospital.

Overnight local reports said she remained under medical care today and had needed stitches to a head wound.

The couple have yet to comment on the surreal incident on their social media but Luis told a Colombian newspaper after the smash: ‘I wanted to brake but the bike didn’t respond.

‘I hit my wife but it could have just as easily have been another person.’ 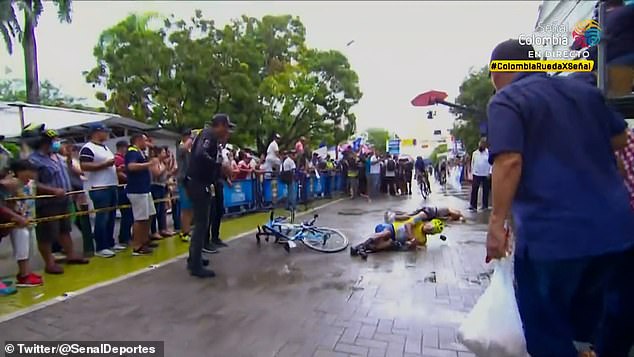 Luis provocatively said after the race: ‘I don’t understand why she didn’t get out of the way’

Insisting Claudia hadn’t lost consciousness despite the TV images showing her appearing to have been knocked out, he added: ‘The doctors have checked her and more than anything it was the shock of it.

‘She knew there was going to be a sprint finish and I don’t understand why she didn’t get out of the way.’

Colombian pro cyclist Egan Bernal, who cheated death earlier this year in a horrific collision with a bus during a training session, insisted safety always had to come first. 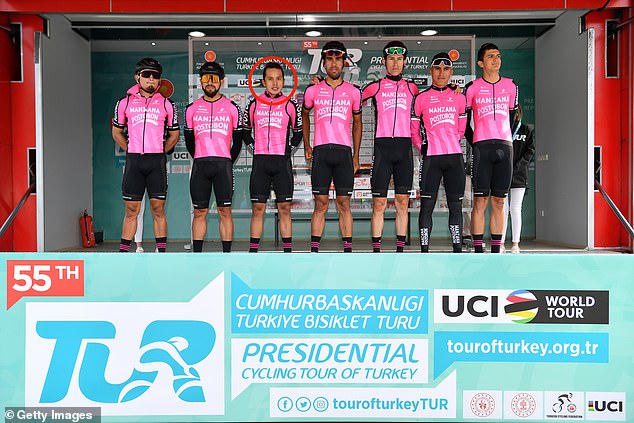 Luis (circled, on a 2019 podium) said of his wife: ‘She knew there was going to be a sprint finish’

He wrote on social media: ‘It’s the Vuelta a Colombia and cyclists literally risk their lives to offer a show.

‘But the safety of each and every one of them should always be guaranteed.’