EXPRESS INFORMER > Business & Finances > Why are sin stocks like tobacco performing so well?

For some investors being good is essential, but for others much of the appeal of sustainable funds is they have largely outperformed the market in recent years.

Now they are suffering a period of woeful performance, as interest rates tick higher and investors move away from growth into value.

By contrast some of the FTSE’s big hitters peddling tobacco and fossil fuels, which have been largely excluded from sustainable portfolios due to their ‘sin stock’ status, have held firm.

Tobacco stocks are on track for their best year in a decade and it’s a similar story for oil and gas stocks.

The oil and gas sector has been boosted by increased demand following the pandemic, and Russia’s invasion of Ukraine has pushed the price of oil even higher.

We look at why investors have moved to sin stocks and what this means for sustainable investing.

Why have ‘sin stocks’ performed well?

The sin stocks label has traditionally referred to gambling, alcohol, tobacco and weapons companies, although it has come to include other sectors like fossil fuels. These sectors are usually screened out by ESG funds.

The move towards defensive stocks as the threat of recession looms means sin stocks are starting to enjoy their time in the sun.

Oil and gas companies in the FTSE 350 have, unsurprisingly, been the strongest performers this year.

Tertius Bonnin, assistant portfolio manager at EQ Investors says: ‘The new economic environment in which we find ourselves is characterised by higher inflation, higher interest rates and higher uncertainty.

‘This environment has led investors to favour companies with near-term cash returns (for example those companies paying high dividends). Companies with these sorts of characteristics are often more mature companies, such as Oil & Gas or Tobacco.

‘Indeed, both Oil & Gas and Tobacco are two areas that sustainable investors have had little-to-no exposure, but that have performed very well in the year-to-date. This has undoubtedly hurt relative performance (an investors’ performance versus e.g., global equities) for some sustainable funds.’

Despite relative demand for more sustainable funds, 13 of the top 20 largest UK domiciled equity funds have tobacco and/or oil stocks in their top 10 holdings, according to Morningstar Direct data.

This is largely because tobacco and oil and gas make up a sizeable portion of the FTSE 100 and have historically paid out dividends even during times of downturn.

Indeed in the third quarter, oil and gas dividends were up by a fifth (18.9 per cent) year-on-year, according to Link Group’s Dividend Monitor.

BP and Shell have proved mainstays of UK Equity funds for this very reason. This year the two companies have announced huge share buybacks after posting bumper profits thanks to surging oil and gas prices.

Tobacco company Imperial Brands has also announced a buyback of up to $1billion and has been a lucrative income stock with a dividend yield of seven per cent and a strong history of payouts. 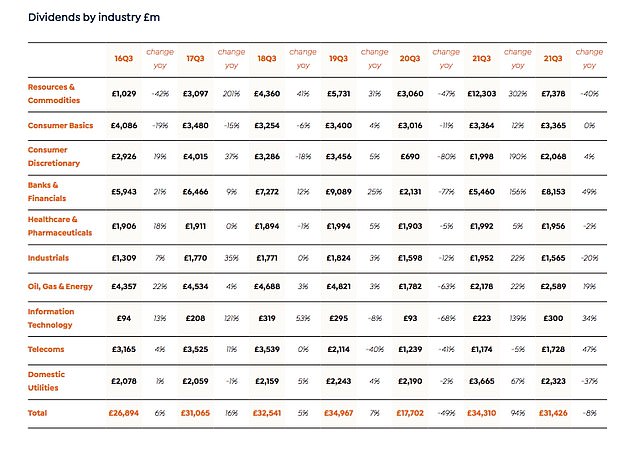 How sustainable is this period of strong performance?

Investors have flocked to oil and tobacco sectors because they have proved to be safe havens for investors looking for income and a bit more certainty – but just how long can this continue?

As the world grapples with the transition from fossil fuels to alternative and renewable energies, investors are looking to oil companies’ bumper profits as a way to shield themselves from the recession.

However, they are facing mounting criticism over their rewards to shareholders during the cost of living crisis which might make it harder to increase dividends in the coming months.

‘There comes a point at which the global economy when faced with very high energy prices starts to collapse in on itself.

‘What happens is it chokes off demand for energy and prices fall back. But there’s an unpredictable geopolitical situation at the source of all this so it’s hard to predict.

‘I don’t see anything to suggest energy prices are moving downwards or that we’re getting any greater certainty in the world. There’s a case that actually things are becoming more uncertain so I can see oil and tobacco continuing to do well for the foreseeable.’

Although the tobacco industry has relatively reliable cash flows – given it is selling an addictive product – its future is far from certain.

Bonnin says: ‘While the energy space is more nuanced, we view tobacco as a clear cut example of an industry in decline and whose prospects are deeply challenged. Volume growth in cigarette sales has continued to fall in developed markets, while governments have tightened the screw both on higher taxation and stricter regulation.

‘This is pushing some of the large players in the market to start acquisitions of other businesses far from their core competency. This risks these management teams misallocating shareholder capital.’

Khalaf adds: ‘Longer term issues for both of these sectors is the transition to greater sustainability – broadly in terms of sustainable energy for the energy companies and moving away from tobacco products for tobacco companies.

‘With such a huge wholesale transition there’s a high degree of risk in terms of being able to repeat the successes that you’ve had in the past from a totally different business line.’

Bonnin adds: ‘So while these sin stocks are enjoying their moment in the sun, our conviction rests in those companies providing solutions rather than problems.’

What does this mean for ESG investing?

Could the outperformance of sin stocks show we’ve reached the peak of ethical investing?

Investors have certainly become more sceptical and pessimistic about ESG investing than they were even a year ago.

ESG funds saw their first overall outflow in more than three years ago in September, according to funds network Calastone.

And a recent survey from the Association of Investment Companies (AIC) also reveals that the share of investors who think that ESG investing is more likely to improve performance has shrunk from 33 per cent to 22 per cent.

Khalaf notes a lot of the growth in the ESG fund markets came not just ESG investors: ‘[There were] people looking for returns because they could see that this was actually going to be quite a big growth area. Maybe there’s been a bit of a rowback from that.’

Dominic Rowles, Lead ESG Analyst at Hargreaves Lansdown adds: ‘Many who invest in exclusions-based funds do so for moral or religious reasons, so the recent bout of underperformance is unlikely to cause them to significantly change their approach.

‘Many exclusions-based funds have the potential to perform well over the long term, but it’s important investors understand, and are prepared to endure, the inevitable ups and down that come with this type of approach.

‘As ever, when investing in funds, it’s important to invest with fund managers who have a proven track record of adding value for investors.’