EXPRESS INFORMER > Business & Finances > Why are airlines and airports in chaos? Experts have their say

The magnitude of the debacle engulfing Britain’s aviation sector has been laid bare in recent days – and it is not a pretty sight.

For what should be a relaxing break away for millions of people this summer, it has turned into a myriad of worry about last minute cancellations and airport chaos.

This week, Dubai-based airline Emirates rejected an order from Heathrow that it must cancel flights to and from the airport to comply with a new cap on passenger numbers.

Heathrow has capped passenger numbers to 100,000 a day until 11 September, and told airlines to stop selling summer tickets.

Shambolic: Swathes of passengers are facing lengthy queues and delays at airports

Last week British Airways, previously seen by many as a stalwart of the nation’s aviation sector, announced plans to cut a further 10,000 flights to the end of October.

Other airlines like easyJet have also made sweeping cancellations to try and reign in the chaos.

What is going on in the aviation sector? How has this shambles emerged and why weren’t airports and airlines adequately prepared  for the surely inevitable surge in demand for travel following the pandemic? This is Money asked two experts to find out.

From their analysis, it appears a potent cocktail of factors have combined, triggering the shambolic scenes seen now.

It is also not just Britain’s airports and airlines struggling. Problems are occurring across Europe, with airports like Schipol in Amsterdam also hit hard.

Speaking to This is Money, Rhys Jones, an expert at Head for Points, said: ‘Fundamentally, the chaos we are seeing at airports and airlines in the UK is the result of multiple issues happening at the same time.

‘Perhaps the biggest problem was the fact that the furlough scheme ended in the autumn, before air travel demand had returned to anywhere near its previous highs, leaving airlines and airports to make difficult decisions about staffing levels.

‘This was further compounded by Omicron, which stalled the recovery of the sector, and the lack of clarity from the Government about how and when travel restrictions would be lifted.

‘Last December it would have been extremely hard to predict whether travel would bounce back in 2022 or whether Omicron would result in further lockdowns and travel restrictions.

‘It could have gone either way, and the aviation industry was careful not to overstretch itself for fear of losing more money than it already had, so there was a lot of caution about ramping up again.’

He added: ‘The ramp up of the past six months is also unprecedented, going from very low volumes of traffic to very high ones in a very short space of time, which is very difficult to manage.

‘I don’t think the aviation industry has ever experienced such a huge bounce-back over so short a space of time – I believe post-9/11 and post-2008 were more gradual, for example.’ 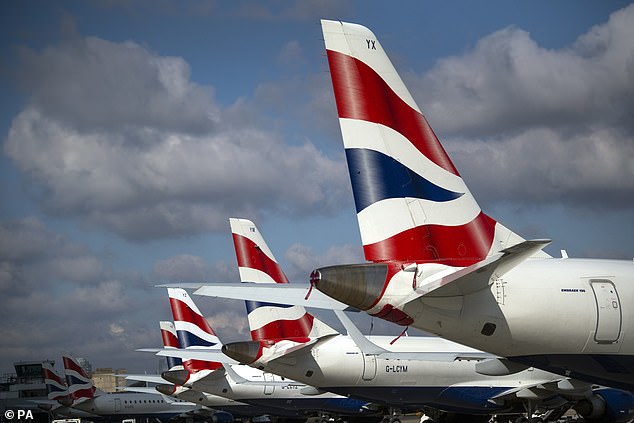 Cancellations: British Airways has axed thousands of flights until the autumn

Notably, Jones does not believe any one entity is to blame for the current chaos, because a number of factors have played a role in exacerbating the situation.

In terms of when the current chaos will start to calm down, Jones said: ‘I’m hopeful that issues will be resolved by late summer/autumn, which is of course too late for the peak school holiday season which is also the most profitable period for airlines and airports.’

Gordon Smith, a travel expert and aviation journalist, told This is Money: ‘While there was little doubt that a rebound would eventually occur, the scale and speed of the surge in passenger demand caught many businesses off guard.’

He added: ‘There are serious fault lines appearing between the airlines who planned properly and are ready for the summer, and those who are struggling to cope.

‘The enormous frustrations stem from the fact that aviation is a complex ecosystem, and carriers are only as strong as their weakest partner.

‘You might have your own house in order, but if a contractor or supplier is struggling, you – and your passengers – will soon start feeling the pain too.’

How to find travel insurance

The simplest way to look for travel insurance is to use a comparison site.

Results will similar across most comparison sites but some may have special deals, so it could be worth using more than one.

If you have previous serious medical issues consider a specialist insurer or broker.

This is Money has partnered with Compare the Market to help you find great travel insurance. You can compare prices and cover at the link below.

On the issue of passenger number restrictions and the sector’s outlook, Gordon said: ‘After more than two years of begging us to get on a plane, some airlines are now going out of their way to keep passenger numbers down.

‘It’s a farcical state of affairs, but with no quick fixes, it looks likely that this turbulence will continue for the rest of the summer season.’

Another factor that cannot be ignored centres on one word: recruitment.

In recent months the aviation sector has been scrambling to hire new staff after axing thousands of jobs during the pandemic, and also seeing many quit for better paid work in other industries.

British Airways alone shed around 10,000 staff during the pandemic.

Now, those aviation firms that cut their staffing levels to the bone have been unable to recruit fast enough after the Government suddenly lifted all travel restrictions in March, fuelling a huge surge in bookings.

Jones told This is Money: ‘We’re in one of the hottest employee markets ever right now, so a lot of staff previously working in menial labour jobs at airports and airlines have found they can get better paying jobs with better hours elsewhere.

‘Who wants to get up at 3am to move baggage around on minimum wage?’

While the situation is gloomy, it is, Jones told This is Money, important to note that not all airlines and airports are floundering.

Jones said: ‘While British Airways, Wizz Air and easyJet are having a particularly tough time, Ryanair and Virgin Atlantic have fared much more favourably.

‘If you haven’t booked your summer holiday yet, it pays to do your homework and find out who and where is holding up well.’

If your flight is cancelled or you face hefty delays while at the airport, it pays to know your rights and what compensation you may be entitled to.

This is Money has a handy guide on your rights for flight cancellations, detailing what you should do if, for instance, you cannot go on holiday because your flight is cancelled or what to do if you are stuck at an airport for hours.