The Royal Family turned out in force for the Queen’s last day of the Platinum Jubilee celebrations for the Platinum Pageant.

The Queen was represented by her beloved family who looked like they were enjoying every minute of the procession.

While a few were notably missing, including Prince Harry and Meghan and Prince Andrew, her three other children, seven grandchildren, and their respective spouses were all present, as were a selection of cousins and their families.

Here, FEMAIL takes a closer look at the royals who showed up to celebrate Her Majesty’s Platinum Jubilee pageant…

Kate, The Duchess of Cambridge: Kate Middleton, 40, looking elegant in a £400 Tailored Crepe Midi Dress from Self Portrait as she joined her husband Prince William, 39, at the Party At The Palace concert. Kate enjoyed the evening and was often seen singing along to het favourite tunes.

Prince Louis of Cambridge: Louis, four, has been the star of this weekend with his animated facial expressions and toddler antics. He didn’t attend the concert on Saturday night as it was late, but he has made a number of scattered appearances throughout.

Princess Charlotte of Cambridge: Charlotte, seven, is the middle child and only daughter of Kate and William. Her full name is Charlotte Elizabeth Diana, honouring her grandfather Charles, Prince of Wales, her great-grandmother Queen Elizabeth II, and grandmother Diana, Princess of Wales. She’s often affectionately called ‘Lottie’ and ‘Mignonette’ by her parents.

Prince George of Cambridge: George, eight, is Kate and William’s eldest child and the third in line to the British throne. He often appears alongside his parents on royal duties these days. But when he was born he spent his first months at his parents’ cottage on the grounds of Bodorgan Hall in Anglesey, Wales, before his family relocated to Kensington Palace in 2014 for future engagements. 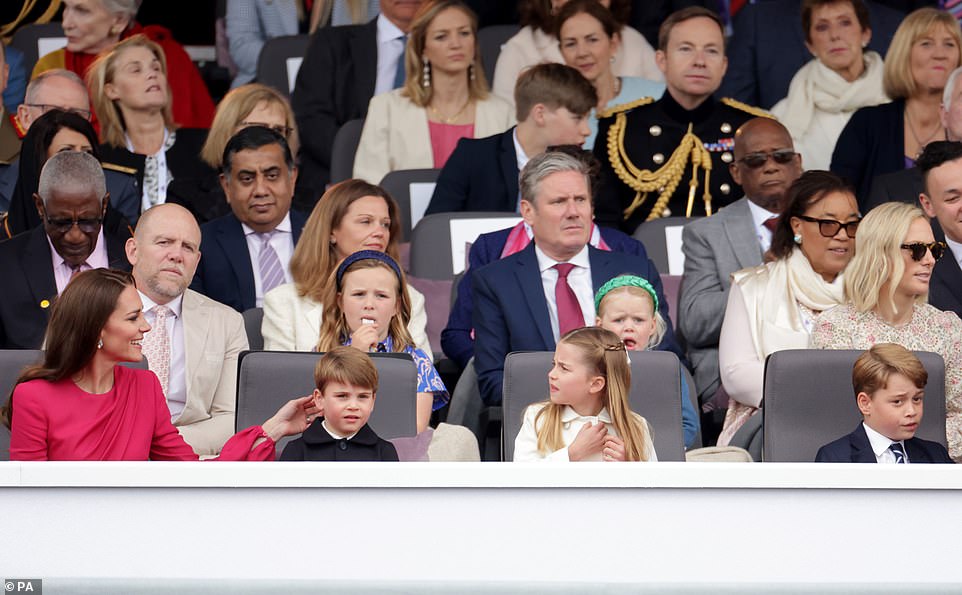 Prince William: The Duke of Cambridge, 39, also enjoyed the concert, waving his flag along side his son George. William has had a busy weekend, involved in every step of the celebrations. But we are yet to see him come face-to-face with his brother Prince Harry.

Camilla, The Duchess of Cornwall: Camilla, 74, sat with Prince Charles, wearing an elegant all-black ensemble for the star-studded concert. Camilla also accompanied her husband on stage when he gave his speech, celebrating The Queen’s 70 years.

Prince Charles: Prince Charles, 73, has represented the Queen throughout the Jubilee celebrations. And it is becoming more evident he will take on an increasingly prominent role as his mother faces ongoing health issues. His speech was welcomed warmly as he once again referred to his mother as ‘mummy’.

Princess Anne: Princess Anne, 71, was seated next to her brother Charles, and looked elegant in her outfit teamed with a neat scarf. She was often seen waving her flag to the music. Princess Anne took on a starring role in Trooping the Colour, accompanying her brother Prince Charles on horseback as he inspected the troops and took the salute.

Vice Admiral Sir Timothy Laurence: Princess Anne’s husband, 67, was seated between his wife and The Countess of Wessex. Despite not being a working member of the Royal Family, Sir Timothy was invited to join the Queen on the Buckingham Palace balcony yesterday, in recognition of the valuable support he provides his wife, the Princess Royal. The retired Royal Navy officer wore his service medals.

Mia Tindall: Mia, eight, is Mike and Zara’s oldest child and she has two younger siblings. She’s close to all her cousins, and they share a giggle at most family events. She is currently 22nd in line to the British throne.

Lena Tindall: Lena, aged three, is the youngest daughter of Mike and Zara’s children. Her brother Lucas arrived in March 2021.

Zara Tindall: Standing out from the crowd the Queen’s granddaughter Zara Tindall, 41, Princess Anne’s younger child and only daughter. The accomplished equestrian appeared on particularly good form and was spotted dancing to some of the music.

Other family members who were also in the royal box: 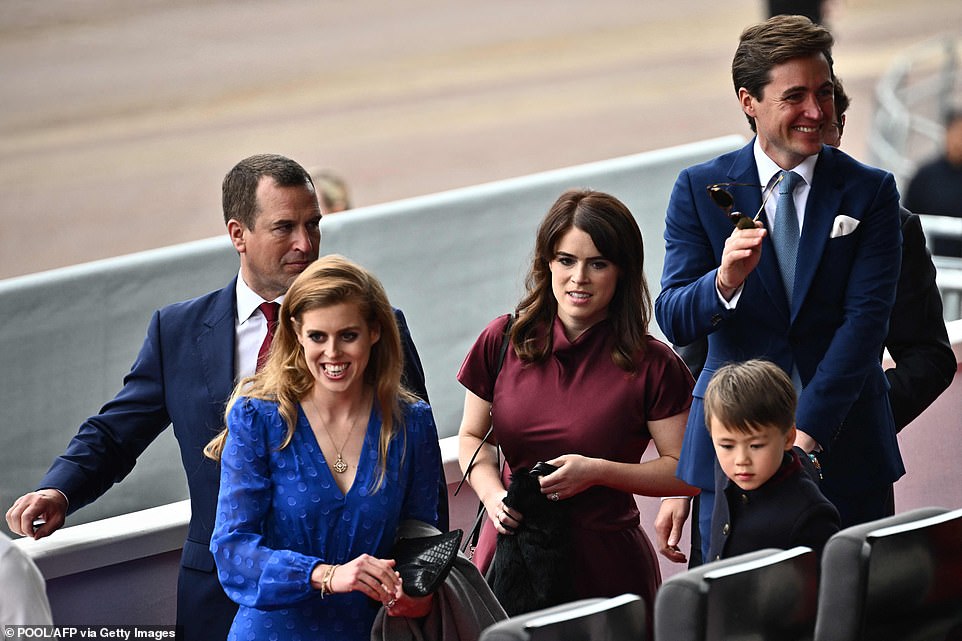 Prince Edward: The Earl of Wessex: Edward, 58, the Queen’s youngest son, was joined by his wife and two children at the concert. Whereas once the Wessexes would have found themselves on the second row of such an occasion, in reflection of Edward’s lower placing in the line of succession, he has been bumped up the pecking order after Prince Andrew and the Duke and Duchess of Sussex stepped back from royal duties. As a result he is given prime seats at events these days.

Jack Brooksbank: Princess Eugenie’s husband Jack Brooksbank, 36, has recently become the European brand ambassador for Casamigos, the tequila company George Clooney co-founded in 2013 and recently sold for $1 billion. He also started Jack Brooksbank Ltd, a wine, beer and spirits wholesaler. Jack and Eugenie enjoyed the evening’s entertainment, while their young son was tucked up at home.

Princess Eugenie: Princess Eugenie, 32, stepped out in a patriotic red, white and blue dress by Gabriela Hearst to attend the concert. The mother of one teamed her dress with a necklace and styled her hair in a relaxed style with glam make-up.

Edoardo Mapelli Mozzi: Princess Beatrice’s husband Edo, 38, has stayed by his wife’s side all weekend. The father-of-two shares daughter Sienna with the royal and has a son, Wolfie, from a previous relationship.

Princess Beatrice: Princess Beatrice, 33, looked sensational in a floaty navy dress by The Vampire’s Wife, teamed with a statement gold bracelet and a fascinator. Beatrice was the most senior member of the York family present after her father tested positive for Covid.

Savannah Phillips: Savannah, 11, is the daughter of Peter and his ex-wife Autumn Kelly. The Queen’s oldest great-grandchild has earned a reputation for being the cheekiest young royal over the years. When Princess Eugenie’s official wedding photographs were released, royal fans were quick to spot that Savannah was standing on Eugenie’s dress!

Isla Phillips: Isla is 10 and is the little sister of Savannah, and the youngest daughter of Peter and his ex-wife Autumn Kelly. While it has been speculated that Isla’s middle name – Elizabeth – is in honour of the Queen, that has never been officially confirmed. When Peter’s divorce was finalized in 2021, a statement said: ‘Whilst this is a sad day for Peter and Autumn, they continue to put the wellbeing and upbringing of their wonderful daughters Savannah and Isla first and foremost.

Peter Phillips: Seated next to his daughters Peter, 44, is the Queen’s eldest grandchild. Princess Anne’s son divorced his wife Autumn Phillips last year. The couple share two daughters, Savannah, 11, and Isla, 10, who attend royal events with their father. This weekend they were spotted playing with Princess Charlotte and the Cambridge children at Trooping the Colour.

Lindsay Wallace: Ms Wallace, 40, is Mr Phillip’s new girlfriend, who first stepped out in public alongside the royal in January this year. She’s the daughter of an oil tycoon and a mother of two. While her relationship to Peter is relatively new, she was already known to the Phillips family by her friendship with Zara and went to the same school at the £40,000-a-year school Gordonstoun in Scotland.