With something resembling a genial grunt, the Prime Minister urged his guests to tuck into lunch, Oxfordshire beef fillet with crispy shin, baby leeks and a rich gravy with the promise of marmalade bread and butter pudding to follow.

‘Enjoy it,’ he said before bellowing down the long dining table at Chequers: ‘Eat every scrap. I have to pay for this you know!’ For once Boris Johnson was not joking.

Every time he entertains friends rather than official guests at his country residence or in his Downing Street flat, he is presented with a bill.

And if people stay overnight Boris also gets an invoice for each cooked breakfast provided the following morning.

One guest who tucked into the beef that day which followed pre-lunch drinks and, for some, a vigorous game of tennis with the PM, was curious enough to do some homework.

‘I discovered that it worked out at about £75 a head and that Boris was charged by the trust that runs Chequers,’ he said.

Boris’s divorce from long-suffering QC wife Marina Wheeler (pictured left) pivoted on the finances. The marriage ended in a brief ten-minute hearing in the central family court in February

‘The food wasn’t even very good but the real tragedy is that Boris can’t really afford to entertain on any kind of scale.

‘I am not going to accept another invitation because it seems unfair that he should fork out to feed me when he hasn’t got any money.’

Can it really be true that with a salary of £150,000 Mr Johnson does not have enough spare cash to host a few friends to help him unwind from the cares of office?

Certainly in recent weeks there have been increasing murmurs about his financial plight and its effect on both his physical and mental well-being.

A cripplingly expensive divorce from his second wife, said to have left him ‘cleaned out’; the cost of supporting at least four of his six children; and a substantial drop in income, possibly as much as two-thirds, as a result of becoming Prime Minister — all of these have contributed to what have been described as his ‘dark moods’.

‘He worries about money and complains all the time that he doesn’t have enough,’ says a friend.

‘For a man who has always liked to be generous with his wealth, this has been a difficult adjustment to make.

All the same, it was unfortunate timing that news of his apparent money troubles should emerge just as his fiancée Carrie Symonds was photographed enjoying a luxury break with their five-month-old son Wilfred and three girlfriends in a £600-a-night hotel on the Italian lakes.

However friends insist this — as well as use of a £300-an-hour motor launch for sightseeing trips — are expenses being met by Carrie, not Mr Johnson.

So how hard up can the Prime Minister really be and what is the truth about the scale of his expenditure and the state of his finances?

It is best to start at the shiny black front door of 10 Downing Street, one of the most famous and glamorous political addresses in the world.

But according to former Tory party treasurer and long-time Boris supporter, Lord Marland, appearances are deceptive. 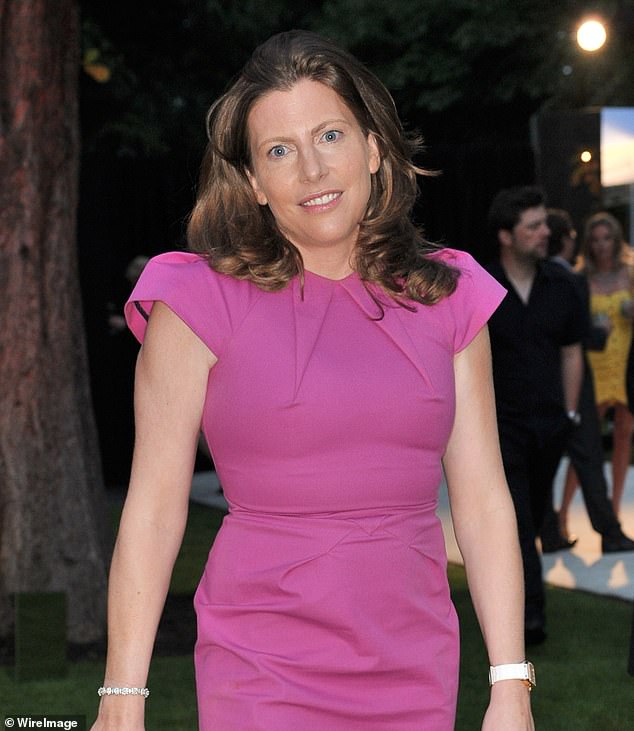 At the same time he is providing for his daughter Stephanie, who was born in 2009 and is the product of an affair with art adviser Helen Macintyre (pictured)

Marland, chairman of the Commonwealth Enterprise and Investment Council, who travels the world banging the drum for Commonwealth trade, says: ‘I’ve seen some incredible residences for prime ministers and while No 10 looks great from the outside, behind the door it’s a dog’s dinner.

‘The PM’s office is tiny, there are 12 people working outside it and just to get into the garden for a breath of air or a stroll he has to go through yet more offices.

‘It’s a national disgrace the way we treat our prime ministers and it’s high time we had a sensible conversation about improving the infrastructure.

‘The pace is relentless, it’s tiring and almost impossible for him to switch off.’

Of course this is hardly new. PMs have lived above the shop for 250 years.

Like previous recent occupants such as David Cameron and Tony Blair, Boris has taken the larger flat above No 11 — the office of Chancellor Rishi Sunak — for his living quarters which he shares with Carrie and Wilfred.

While he pays no rent on the flat, it is regarded as a benefit in kind and there is a liability for heating, lighting, repairs, redecoration and furnishings on which tax is charged. It is thought this costs Boris just over £7,000 a year.

Food sent up from the Downing Street kitchen also has to be paid for separately. Then there is the issue of staff.

At Chequers, ex-military personnel are employed to run the house and grounds, where produce for the kitchen is grown. 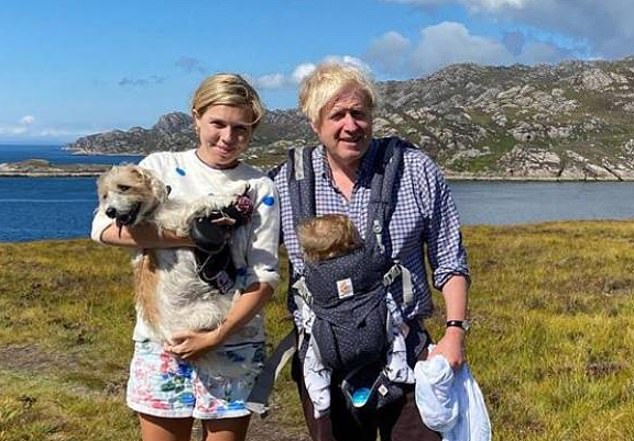 But at Downing Street, while Boris has the services of a cleaner, there is no housekeeper.

There is no nanny for Wilfred because, says a friend, ‘they can’t afford one’.

Even at the time of the baby’s birth, when Boris was still battling Covid-19, they were unable to run to a maternity nurse.

Conversations about money, or rather the lack of it, are said to be constantly recurring.

The marriage ended in a brief ten-minute hearing in the central family court in February only after agreement had been reached on the money.

The settlement with his former wife is estimated to have amounted to around £2 million. As a close friend of Boris told us: ‘He was cleaned out.’

The couple, who had four children together, separated in 2018 after 25 years of marriage.

The Grade II-listed family home in Islington, north London, was sold for £3.35 million, netting a profit of more than £1 million on the purchase price.

Land Registry records also show that there have been some changes to the status of the couple’s country home, a £1.25 million farmhouse in Thame, Oxfordshire, which has a tennis court and swimming pool and which they bought for £640,000 in 2003.

It was regularly used by the family as a weekend retreat and it was where Boris plotted his ill-fated first attempt at the Tory leadership following the EU Referendum in 2016.

Following the divorce in February, the house was transferred into Mr Johnson’s sole name. But, curiously, Marina last month took out a charge on the property under her maiden name.

Such a move suggests that her former husband would be unable to sell the property without her permission. Documents also showed that it has a mortgage with Barclays.

Last year, before becoming Prime Minister, Boris took on another home when he and Carrie bought a £1.3 million four-bedroom town house in Camberwell, South London. It has a mortgage with Santander.

This house would generate a monthly income of at least £3,000 if it were rented out.

It isn’t because Carrie still uses it as a bolthole and to allow 56-year-old Boris a break from the baby to get a good night’s sleep. 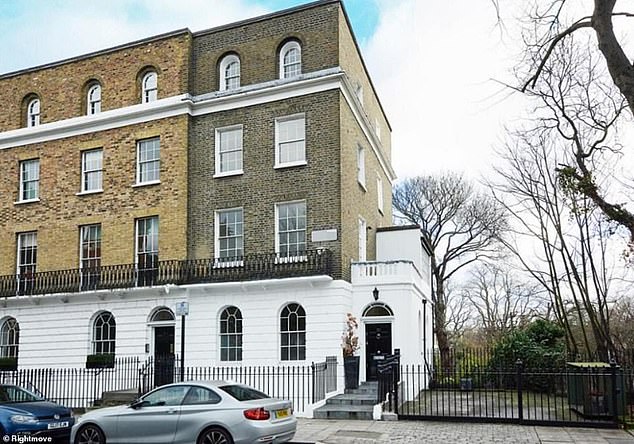 The Grade II-listed family home in Islington, north London (pictured), was sold for £3.35 million, netting a profit of more than £1 million on the purchase price

But properties are far from being Mr Johnson’s only overheads.

He has to support Carrie, who is not working, as well as some of his older children, including Theo, his youngest son with Marina, who is at Cambridge University.

At the same time he is providing for his daughter Stephanie, who was born in 2009 and is the product of an affair with art adviser Helen Macintyre.

Originally Boris’s name wasn’t on the birth certificate and he denied paternity until 2013 when the appeal court rejected Macintyre’s application for a privacy injunction relating to her daughter’s paternity.

The biggest impact on his finances, however, has resulted from a dramatic reduction in income.

In a two-year period during the last Parliament, when he was largely on the backbenches, he earned £800,000 from newspaper columns, after-dinner speeches, book royalties and TV programmes.

Regular income, such as the £275,000 he received for his Daily Telegraph column, have ended, and since moving into No 10 in December last year his outside earnings have shrivelled to £10,500 — all royalties from previously published books.

Boris took on another home when he and Carrie bought a £1.3 million four-bedroom town house in Camberwell, South London (pictured)

His £150,000 salary as PM makes him a political pauper by international standards.

Angela Merkel, the German chancellor is paid £320,000, the New Zealand premier Jacinda Ardern receives £240,000, and even the prime minister of tiny land-locked Liechtenstein gets £195,000.

As a friend says: ‘For years he was earning so much he had no money worries. Certainly during the years of his marriage to Marina who earned good money as a barrister, he was very comfortably off.

‘Now for the first time, when he wants to provide for his family, he is not at all sure he can. This is an unusual position for him.

‘Friends say, “Don’t worry, when you leave Downing Street you will make pots of money like Blair, Cameron and John Major” but his concern is the now not the future. It does play on his mind.’

The days when he could dismiss his six-figure pay for newspaper columns as ‘chicken feed’ as he did in 2009 are long gone.

The danger for Johnson is that gossip about his financial position could make him vulnerable.

He has already found himself in hot water for the evasive way details about his and Carrie’s New Year trip to Mustique in the Caribbean emerged.

The Prime Minister declared a £15,000 ‘benefit’ for the ten-day stay — but nobody admitted giving the gift.

Under parliamentary rules, MPs must identify people who have done them financial favours.

Mr Ross denied paying anything, while the American owners of the magnificent villa said they received payment for the rental, but did not say from whom or how much.

Unlike his predecessor Theresa May, whose banker husband Philip was highly paid, and David Cameron who was well off through marriage and family connections, Boris has no other income to fall back on.

What is clear to friends and supporters is that the costs associated with being a new father, in addition to his existing financial obligations, have put Mr Johnson under strain. 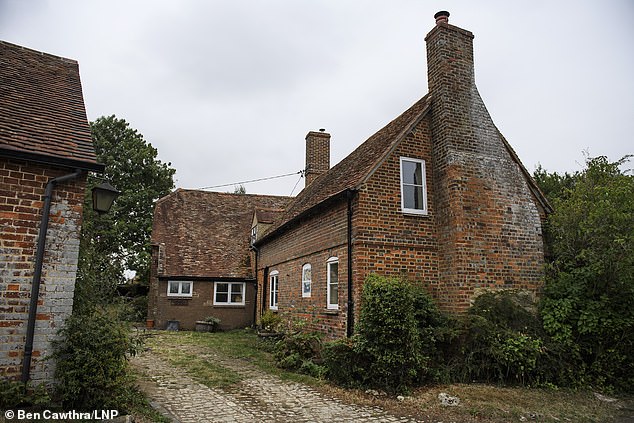 Land Registry records also show that there have been some changes to the status of the couple’s country home, a £1.25 million farmhouse in Thame, Oxfordshire (pictured), which has a tennis court and swimming pool

Meanwhile, his decision with Carrie to have their infant son baptised into the Catholic church before exchanging marriage vows has surprised some.

‘Don’t ask me about a wedding,’ says one friend of the couple. ‘I simply don’t know. The official line is that he’s got too much on, running the country and the Covid crisis to think about domestic niceties.’

However, there has been some future planning: the couple have apparently been inquiring about state-run nurseries and pre-school groups in the Sloane Square area of central London.

Of course, if he were to stand down as Prime Minister his money problems would be solved at a stroke . . .