The World Health Organisation was shocked by Britain’s COVID-19 response and alarmed that the government was aiming for herd immunity, leaked recordings show.

It was also critical of Britain for allowing Premier League football to go ahead despite other European countries cancelling sporting events and mass gatherings.

The U.N health agency has repeatedly shied away from publicly criticising its member countries – particularly its largest donors such as Japan, France and Britain – for their responses to the coronavirus pandemic.

But according to dozens of leaked recordings of internal WHO meetings and documents from January to April – obtained by The Associated Press – the WHO was privately more critical.

For example, in internal meetings during the early days of the crisis, top scientists described some countries’ approaches as ‘an unfortunate laboratory to study the virus’ and a ‘macabre’ opportunity to see what worked.

The recordings show that Britain in particular drew the ire of one of the scientists in the meetings, emergencies chief Dr. Michael Ryan, who has publicly declined to denounce member states for their pandemic response.

‘There isn’t a single sports event in Europe and yet all of the Premier League matches in the U.K. are to go ahead as normal,’ he said.

‘For that to happen, hundreds of thousands and millions of older people are going to become infected and there is just going to be so much death,’ Ryan said.

Still, he said, the different approaches to tackling COVID-19 globally could prove to be ‘a massive ecological study’ that would allow WHO to document what worked best. ‘It’s macabre in some ways, but it’s reality,’ he said.

Speaking publicly on March 11, Dr. Ryan, laid out WHO’s approach to criticising countries in answer to a media question on whether the agency was willing to say which countries weren’t doing enough. 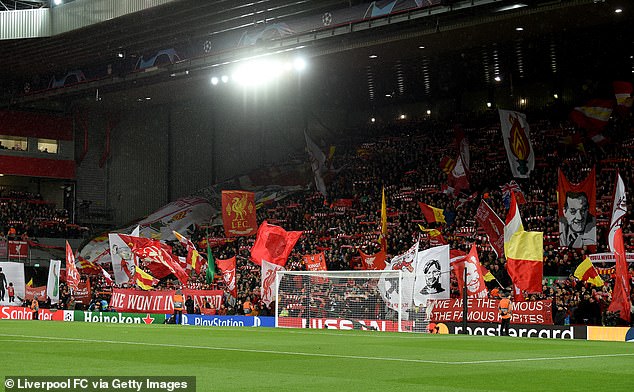 A packed Anfield, the home of Premier League football team Liverpool FC, pictured on March 11 for the team’s match against Spanish side Atletico Madrid. Thousands of fans travelled from Spain for the game. This match went ahead despite the coronavirus spreading quickly and many other European countries suspending sporting events and mass gatherings 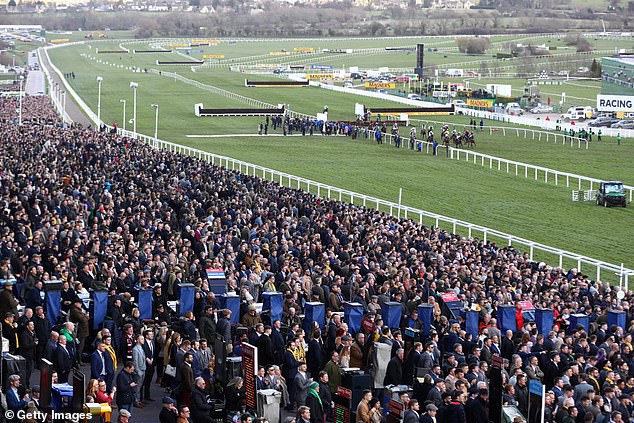 Another sporting event that has come under criticism in the UK for going ahead was Cheltenham festival, which was held on March 13, 2020 (pictured) despite the coronavirus spreading rapidly across Europe

With its annual meeting underway this week, the WHO has been sharply criticised for not taking a stronger and more vocal role in handling the pandemic.

As the coronavirus explodes again, the organisation finds itself both under intense pressure to reform and holding out hope that U.S. President-elect Joe Biden will reverse a decision by the outgoing Trump administration to leave the health agency.

Biden has promised to overturn President Donald Trump’s decision in June to cut off funds to WHO and withdraw the U.S.

The WHO has also bowed to demands from member countries for an independent panel to review its management of the pandemic response, and WHO Director-General Tedros Adhanom Ghebreyesus said Monday that the agency welcomed ‘any and all attempts’ to strengthen it ‘for the sake of the people we serve.’

One of the central dilemmas facing the WHO is that it has no enforcement powers or authority to independently investigate within countries. Instead, the health agency relies on behind-the-scenes talks and the cooperation of member states. 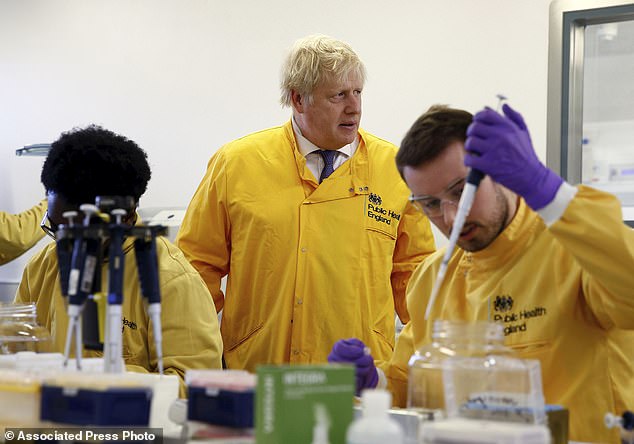 Critics say the WHO’s traditional aversion to confronting its member countries has come at a high price.

‘We need WHO to be bold and to use their political power to name and shame because the consequences are so devastating,’ said Sophie Harman, a professor of international politics at Queen Mary University in London.

‘This is their Spanish flu moment … By not speaking up when countries are doing questionable things, WHO is undermining its own authority while the planet burns.’

Others said it would be politically unwise for WHO to be too outspoken unless countries give the agency more power and the ability to censure countries – an option that Germany and France have recently proposed.

‘If Tedros was to take a very aggressive stance toward member countries, there would be repercussions,’ said Suerie Moon, co-director of the Global Health Centre at the Graduate Institute of Geneva, referring to WHO’s director-general.

WHO spokeswoman Farah Dakhlallah said that since the beginning of the coronavirus outbreak, ‘WHO officials have had and continue to have, frank and open discussions with government counterparts.

‘We are proud of an organisational culture that fosters candid discussion with the aim of reaching life-saving solutions.’ 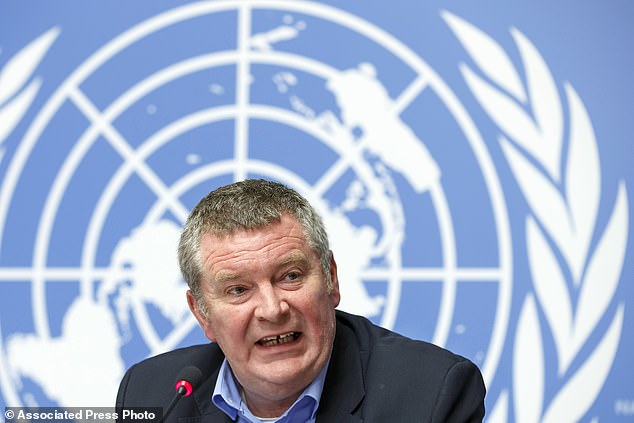 Dr. Mike Ryan, WHO Assistant Director-General for Emergencies, during a press conference, at the European headquarters of the United Nations in Geneva, Switzerland, February 9, 2020.  Ryan has said the WHO tries to work with member states constructively, but it has been criticised for not criticising its members states’ response to the coronavirus

It’s not unprecedented, however, for WHO to publicly question its member states.

It threatened to close its China office when the country was hiding cases during the SARS outbreak, loudly called for Nigeria to reverse its boycott of the polio vaccine in 2003 and accused Tanzania of not sharing enough information about an Ebola epidemic last year.

The review of the WHO’s role in the pandemic comes at a critical time because the agency is now tasked with helping to buy and distribute coronavirus vaccines around the world once any prove effective, especially to poorer nations.

Some countries, including the U.S. and Russia, have refused to join the effort, but on Sunday, WHO chief scientist Dr. Soumya Swaminathan said she hoped Biden’s election would ‘open the door’ to U.S. inclusion.

WHO’s reticence to call out countries started with China. Despite a January meeting between Tedros and Chinese President Xi Jinping, information on the outbreak was still sparse throughout February.

Maria Van Kerkhove, the WHO’s technical lead for COVID-19, noted that the agency lacked ‘enough detail to say what has worked and what hasn’t.’

Yet at a media briefing shortly afterwards, Tedros said, ‘China is doing many good things that are slowing the virus and the facts speak for themselves.’

Also in February, WHO scientists were concerned about Japan. On February 1, a passenger who disembarked the Diamond Princess cruise ship in Hong Kong tested positive for the coronavirus. 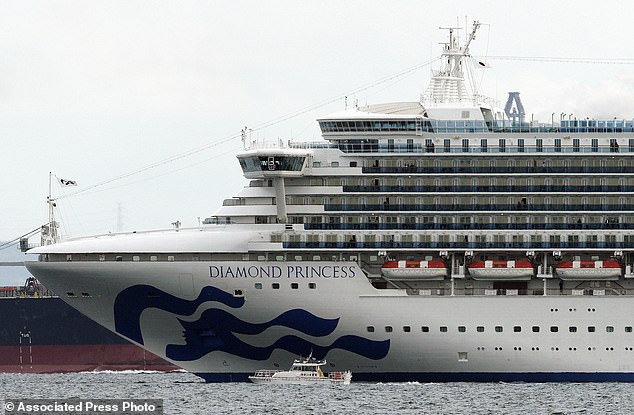 At the ship’s next stop in Yokohama, 10 more cases were found and authorities put all 3,711 people on board under lockdown.

Ryan told reporters at the time: ‘Let’s be careful here not to overreact.’ But on February 10, the case count nearly doubled overnight.

‘(That’s) not surprising given the nature of the response of the investigation,’ Ryan said at an internal meeting, saying only a small number of epidemiologists had been assigned to the outbreak.

‘If you double the number of cases in a ship in a day, something is not right.’

Dr. Thomas Grein, the WHO’s chief of acute events management team, reported to his colleagues that the agency had discussed the outbreak with their Japanese counterparts, but failed to glean much useful information.

‘It’s a very, very sensitive issue and we need to tread carefully,’ he warned.

Although the WHO was keenly aware the situation was deteriorating, scientists said the outbreak could help in understanding COVID-19 transmission patterns.

‘(It’s) unfortunate, but a useful opportunity to study the natural history of the virus,’ Ryan said.

Soon afterwards, the WHO announced more than half of the world’s known coronavirus cases outside China were aboard the Diamond Princess.

‘It was very obvious on that cruise ship that things were going badly wrong and WHO should have said something,’ said Lawrence Gostin, director of the WHO Collaborating Centre on Public Health Law and Human Rights at Georgetown University.

‘When what countries are doing is flat-out wrong, we need WHO to say so.’ 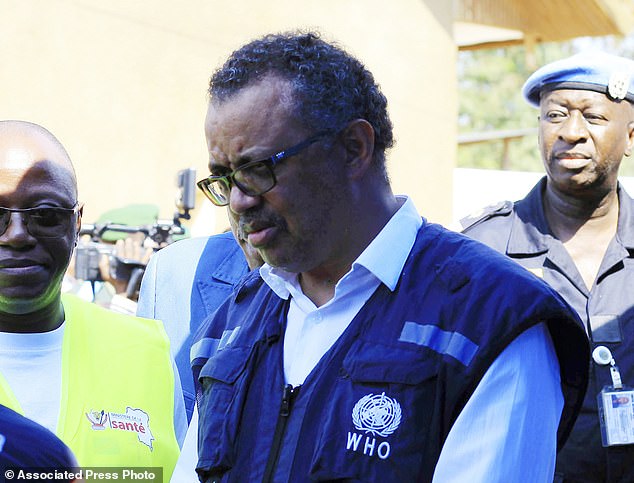 Dr. Tedros Adhanom Ghebreyesus, WHO Director General, speaks to a health official at a newly established Ebola response center in Beni, Democratic Republic of Congo on August 10. At a meeting of WHO’s member states, Tedros said he welcomed ‘any and all attempts to strengthen the organisation…for the sake of the people we serve.’

While the WHO wasn’t specific, Tedros said on February 26: ‘One of the biggest challenges we face is that too many affected countries are still not sharing data with WHO.’

Throughout February and March, COVID-19 triggered outbreaks in South Korea, Singapore, Iran and elsewhere. The virus also gained a foothold in Italy, turning Europe into the epicentre of the pandemic.

At the WHO, officials worried in internal meetings about the lack of information from European member states. Grein said the WHO’s efforts to get more detail about the spiralling outbreaks had ‘spectacularly failed.’

Yet on March 8, Tedros tweeted that ‘the government & the people of Italy are taking bold, courageous steps aimed at slowing the spread of the #coronavirus & protecting their country & world.’

Three days later, Tedros declared COVID-19 to be a pandemic, saying the announcement was made partly due to ‘alarming levels of inaction’ by countries, which he didn’t name. 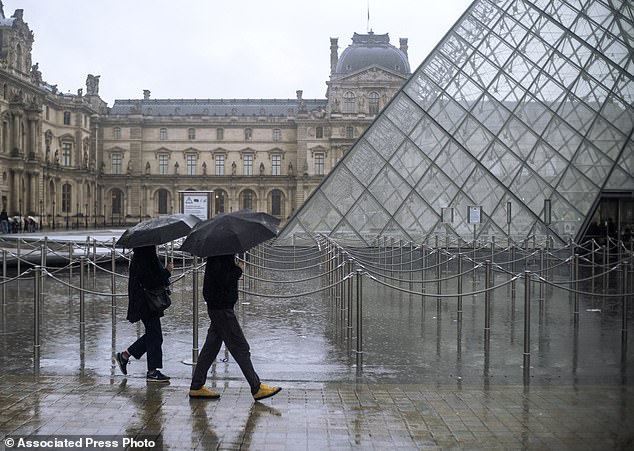 People walk by the Louvre museum, in Paris, France on March 1, 2020. The spreading coronavirus epidemic shut down France’s Louvre museum in March – along with much of Europe – as the pandemic ravaged health systems

‘If a country is not providing vital epidemiological or biological information, then WHO and the world are flying blind in an outbreak and we can’t have that,’ he said.

The WHO also complained in private about Western countries hoarding scarce pandemic supplies.

‘We had the terrible situation yesterday with (protective personal equipment) where all the supplies were requisitioned in France and we lost access,’ Ryan told his colleagues.

He said WHO needed to pressure countries and companies to avoid similar situations.

Going forward, WHO’s role in the continued unfolding of the pandemic will depend in part on the panel review.

Harman, the expert from Queen Mary University, sympathised that the WHO had enormous responsibility in the early months of COVID-19, but said even greater challenges loom now.

‘This is not an experiment for WHO to learn lessons for the future, the stakes are too high for that,’ she said. ‘With the next wave of the pandemic, I think the time for quiet diplomacy has passed.’