The World Health Organisation has told rich countries to stop giving booster vaccinations to allow for more Covid-19 jabs to be distributed by poorer countries.

The UN health body said halting booster shots until at least the end of September would help ease the drastic inequity in dose distribution between rich and poor nations.

WHO chief Tedros Adhanom Ghebreyesus said that the move would help towards the goal of enabling ‘at least 10 percent of the population of every country to be vaccinated’.

Despite the disparity between rich and poor countries, some nations that have better access to vaccines – such as the UK, Israel and Germany – are already either offering booster jabs, or signalling their intention to do so.

Pictured: An Israeli woman receives a third coronavirus vaccine injection at a senior center in Jerusalem, Wednesday, Aug. 4, 2021. The WHO has told rich countries to stop giving booster vaccinations to allow for more Covid-19 jabs to be distributed to poorer countries

According to The Daily Telegraph, booster (or third) jabs are set to be offered to 32 million Britons starting as early as next month amid fears that the efficacy of the vaccine against Covid-19 and emerging variants could begin to decline.

Ministers are reportedly planning to deliver an average of 2.5 million third doses a week, beginning the first week of September, the newspaper said on Wednesday.

All adults aged 50 or over, as well as people that are immuno-suppressed – will be offered the booster jab, with pharmacies being drafted in to aid the roll-out.

The UK is not the only one. Israel last month began rolling out a booster shot for the over-60s, while Germany said Tuesday it would start offering third doses of the two-shot Pfizer-BioNTech and Moderna vaccines from September.

The UN health agency has for months raged against the glaring and growing imbalance, branding it a moral outrage.

Tedros told a press conference that he understood why countries wanted to protect their citizens from the more transmissible Delta variant of the virus, which was first identified in India. 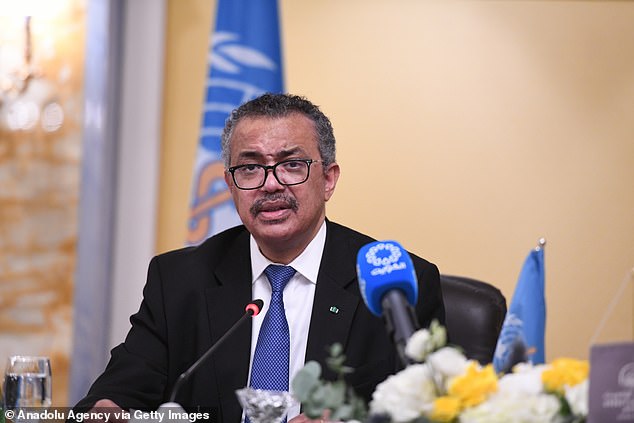 ‘But we cannot accept countries that have already used most of the global supply of vaccines using even more of it, while the world’s most vulnerable people remain unprotected,’ he said.

At least 4.27 billion doses of Covid-19 vaccines have now been administered globally, according to an AFP count.

In countries categorised as high income by the World Bank, 101 doses per 100 people have been injected.

That figure drops to 1.7 doses per 100 people in the 29 lowest-income countries.

Many of the world’s less wealthy countries are having to rely on Covax – the worldwide initiative aimed at distributing vaccines to poorer nations – which is aiming to provide 2 billion doses by the end of 2021. 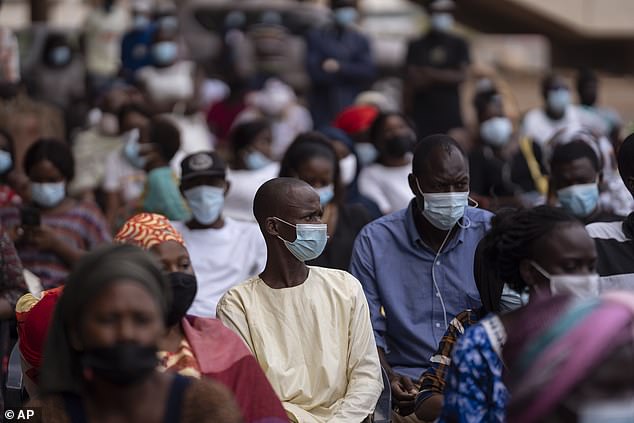 Pictured: People wait to be vaccinated with Janssen Johnson & Johnson COVID-19 vaccine at Leopold Sedar Senghor stadium in Dakar, Senegal, Wednesday, July 28, 2021. While the European Union announced Tuesday that half of its population had been fully vaccinated, in Africa, that figure stands at less than two percent

Most vaccine types being rolled out around the world require two doses for a person to be considered fully vaccinated, although the one-shot Johnson and Johnson vaccine has been approved in the United States.

‘Accordingly, WHO is calling for a moratorium on boosters until at least the end of September,’ said Tedros. ‘To make that happen, we need everyone’s cooperation, especially the handful of countries and companies that control the global supply of vaccines.’

Tedros said the G20 group of nations were the biggest producers, consumers and donors of Covid-19 jabs.

‘The course of the Covid-19 pandemic depends on the leadership of the G20,’ he said.

He urged vaccine producers to prioritise Covax, the global scheme which tries to secure vaccines for nations with less financial clout, which has shipped just 177 million doses so far.

While the European Union announced Tuesday that half of its population had been fully vaccinated, in Africa, that figure stands at less than two percent, said the WHO’s Covax frontman Bruce Aylward.

He said the booster moratorium would help to right the ‘extraordinary and increasing inequity’ – saying the end of September target would be missed on the current trajectory.

Aylward said the world is ‘simply not going to be able to achieve’ getting out of the pandemic if high-coverage countries start using up the available doses for third or even fourth shots. 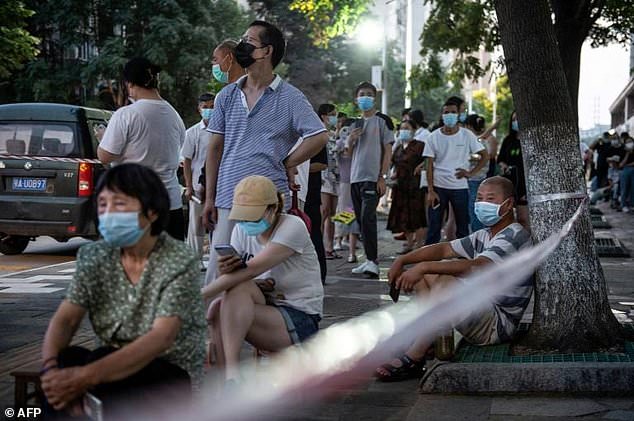 Kate O’Brien, the WHO’s vaccines chief, added that there was no convincing picture yet as to whether booster doses were actually necessary, given the level of protection that the WHO-approved vaccines gave against severe disease, hospitalisation and death.

‘We don’t have a full set of evidence around whether this is needed or not,’ she said.

The coronavirus pandemic has killed at least 4,247,231 people worldwide since the virus first emerged in late 2019, according to an AFP compilation of official data.

The WHO’s call for a booster-jab moratorium came as China tightened overseas travel curbs after recording its highest number of infections in months, while Tokyo reported the Olympic Games’ first cluster.

The Olympic Games, which went ahead despite a rise in cases in Japan, reported that all 12 members of the Greek artistic swimming team had entered isolation after five tested positive for coronavirus.

The team have withdrawn from remaining competition and the seven members who have so far tested negative have agreed to move to a facility for ‘close contacts’ of positive cases, Tokyo 2020 spokesman Masa Takaya said.

‘We pray for their swift recovery,’ Takaya said, adding that it was the first ‘cluster’ discovered at the Games. 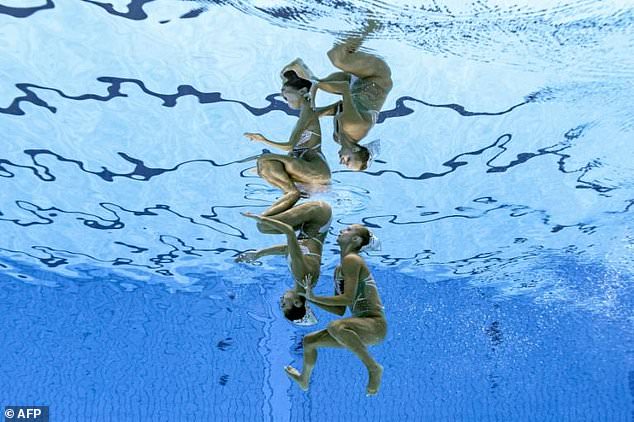 So far, Tokyo 2020 has reported 322 positive virus cases among its ‘stakeholders’ including athletes, officials and media. Most of the positive cases have been among Japanese residents working as employees or contractors.

The movement of people is coming under more restrictions inside China — with localised transport closures and stay-at-home orders in places in some cities — as well as beyond China’s borders.

China’s immigration authority on Wednesday announced it would stop issuing ordinary passports and other documents needed for exiting the country in ‘non-essential and non-emergency’ cases.

However the authorities have pulled back from issuing a blanket ban on overseas travel.

Immigration official Liu Haitao told a press briefing that those who ‘have real needs for studying abroad, employment and business’ will still have their documents issued upon verification.

China had previously boasted of its success in crushing Covid-19, with hard lockdowns in the early stages mixed with tight controls of its borders, but mass testing campaigns have uncovered Delta variant infections across the country.

The latest outbreak is threatening to undo the country’s economic rebound and return to normal life, with nearly 500 domestic cases reported since mid-July.

Covid infections in Iran have surged, hitting a new one-day record for a third straight day Wednesday and taking total cases to more than four million.

The official figures are widely believed to underestimate the real toll but even they make Iran the Middle East country worst hit by the pandemic.

Iran’s supreme leader Ayatollah Ali Khamenei on Monday ordered that ‘necessary measures’ be taken to contain what the government warns is a ‘fifth wave’ of the country’s outbreak. 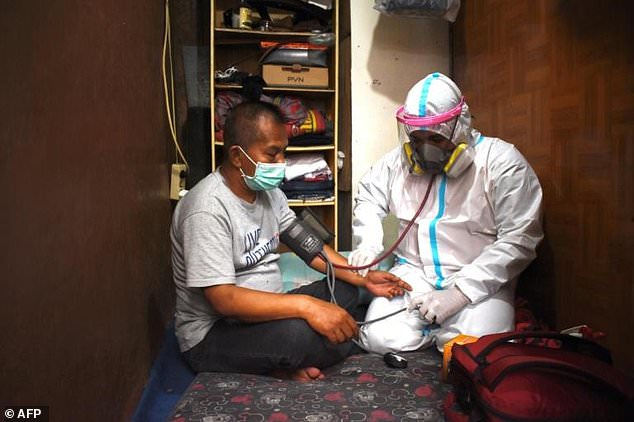 Indonesia’s coronavirus death toll topped 100,000 on Wednesday as the country struggles to control the spread of the Delta variant.

Southeast Asia’s biggest economy has now detected Delta in dozens of regions since it was first found in the archipelago in June.

Scores of Indonesians are dying at home, unable to access hospital care or medical oxygen supplies as health care facilities are stretched to the limit.

More than 3.5 million infections have been recorded to date though official figures are widely believed to be an underestimate.

‘The deaths happened… mainly because of lateness to recognise the severity of the symptoms and to refer patients,’ said Covid-19 taskforce spokeswoman Siti Nadia Tarmizi.