EXPRESS INFORMER > News & Politics > Who spilled all the pies? Delivery van sheds PASTIES all over the road after crash with lorry

Who spilled all the pies? Delivery van sheds PASTIES all over A50 in Leicestershire after crash with lorry

Hundreds of pasties were strewn across the junction of a main road after a lorry crashed into the back of a delivery van.

An HGV collided into the broken down pasty van on the westbound junction 1 of the A50, near Castle Donington, Leicestershire yesterday morning.

Despite the large dent in the back of the pasty-stuffed truck, Derbyshire Roads Policing Unit confirmed there were no injuries and tweeted out a picture of the crash.

A lorry crashed into the back of a broken down delivery van on the westbound junction 1 of the A50 near Castle Donington, Leicestershire, causing the pasties to spread across the road

The tweet also confirmed the lorry driver had been reported to court.

The lorry was heading down the junction when it drove into the back of the broken-down vehicle and caused it to turn on its side and release all the baked goods and crates from inside.

Police, ambulance and fire crews were called to the scene of the crumpled van. 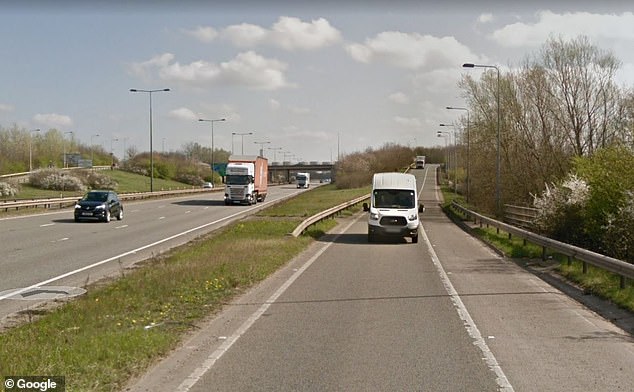 One Twitter user responded: ‘Feel for the van driver he was only trying to earn his crust in these difficult times.’

Speaking about the image, which shows a firefighter looking at the pasty debris, another said: ‘The way this guy is looking longingly at the scattered pasties suggests that he didn’t have any breakfast and is late for his lunch. Can someone please give him a hug!’

‘Poor pasties! How many of those who survived the crash found themselves picked up….and eaten alive,’ added another.