World Health officials have warned about the indirect impact the coronavirus could have on children around the world due to a shortfall in vaccinations and treatments for other diseases, particularly in Africa.

In a media briefing this week, the World Health Organisation’s (WHO) director general Dr Tedros Ghebreyesus, said that while children are at a relatively low risk of contracting and spreading the coronavirus, they are at high risk of other diseases that can be prevented with vaccines during the crisis.

This week marks World Immunisation Week, and according to the director general, more than 20 diseases can be prevented with vaccinations.

But as the world desperately works to develop a vaccination against the coronavirus, production of other vaccinations is falling short while restrictions on travel both internationally and domestically limit access to vaccinations and treatments for other diseases.

World Health Organisation’s (WHO) director general Dr Tedros Ghebreyesus has warned that while children are at a relatively low risk of contracting and spreading the coronavirus, they are at high risk of other diseases that can be prevented with vaccines curing the crisis

Dr Ghebreyesus highlighted malaria in particular, and how modelling analysis  published last week estimated that 41 countries in sub-Saharan Africa could see disruption to their malaria services as a result of Covid-19.

‘In the worst case scenario, the number of malaria deaths in sub-Saharan Africa could double,’ he said during a press conference in which he shared the results of the analysis.

Currently, 116 million children are vaccinated every year around the world, which is 86 per cent of all children born. However, more than 13 million infants are unable to be vaccinated, and this number could increase with Covid-19.

In another example, the WHO’s director general said that polio vaccination campaigns, that vaccinate up to 12 million children in Africa, had been put on hold in some countries due to the coronavirus.

As travel restrictions have limited the vaccine supply chain, some governments are scaling back their routine immunisation services or are shutting them down all together, resulting in new outbreaks of polio in some countries such as Niger.

‘Unfortunately, that will not be possible now as we have suspended the polio mass vaccination campaigns due to the novel coronavirus (COVID-19) pandemic responses that requires global standards for social distancing and hand washing hygiene practices.’ 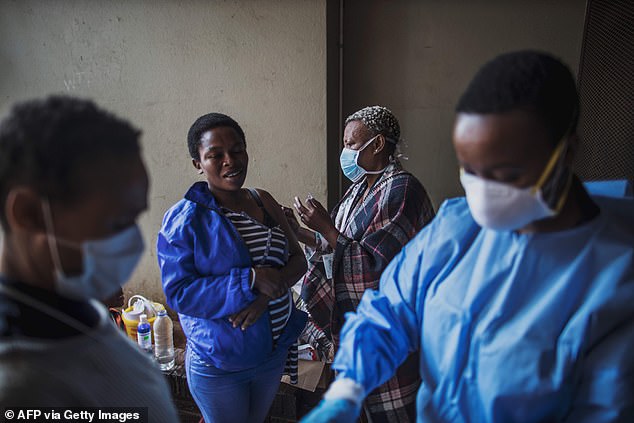 A woman is given the flu vaccine in Yeoville, Johannesburg on 3 April, while a Gauteng Health Department Official gets ready before collecting samples during a door-to-door COVID-19 coronavirus testing drive

Dr Ghebreyesus emphasised the importance of still ensuring that those in the Southern Hemisphere get their annual flu vaccine as it enters its flu season.

He has also said that his organisation would be working closely with governments to ensure that disruption as a result of Covid-19 is as limited as possible during the crisis.

‘Even when services are operating, some parents and caregivers are avoiding taking their children to be vaccinated because of concerns about COVID-19,’ he said. ‘Myths and misinformation about vaccines are adding fuel to the fire, putting vulnerable people at risk.’

‘When vaccination coverage goes down, more outbreaks will occur, including of life-threatening diseases like measles and polio,’ he added. 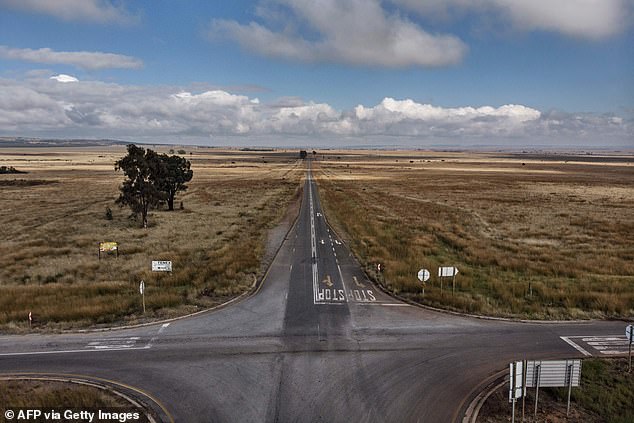 A deserted cross roads, west of Johannesburg, shown on April 29, as the government tries to slow the spread of the coronavirus by entering a ‘Stage 4 lockdown’ on May 1

He warned that services relating to many other diseases that afflict the poorest and most vulnerable people are already being disrupted – including malaria.

While Africa has made tremendous strides in immunising children on the continent, it still falls short compared to other countries and struggles to meet global vaccination targets due to a number of factors, including accessibility, lack of public awareness campaigns and a lack of trust in vaccines.

‘Gavi, the Vaccine Alliance, has estimated that at least 21 low- and middle-income countries are already reporting vaccine shortages as a result of border closures and disruptions to travel,’ said Dr Ghebreyesus.

‘So far, 14 vaccination campaigns supported by Gavi against polio, measles, cholera, human papillomavirus, yellow fever and meningitis have been postponed, which would have immunized more than 13 million people.

‘The tragic reality is that children will die as a result,’ he added.

The latest figures from the Africa Centers for Disease Control and Prevention show that 52 African states have reported cases of Covid-19, totaling 35,371 cases with 1,534 reported deaths. 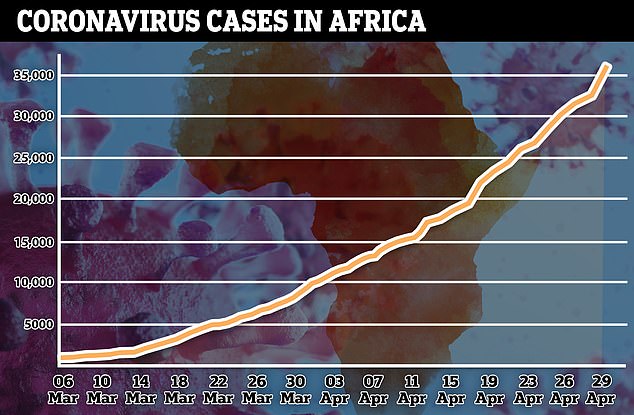 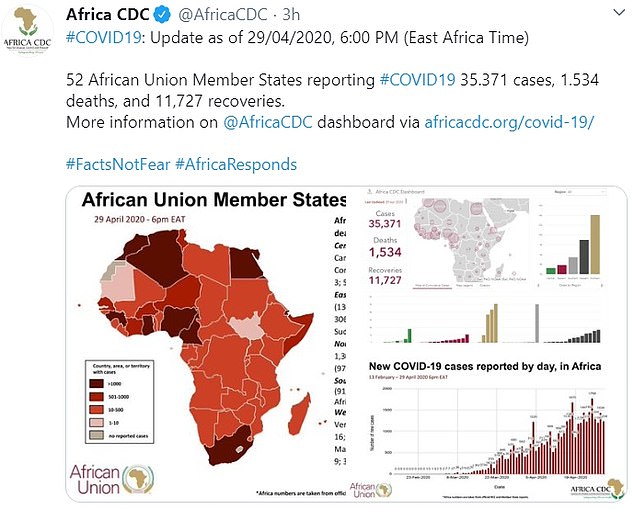 The latest figures tweeted by the Africa Centers for Disease Control and Prevention show that 52 African states have reported cases of Covid-19, totaling 35,371 cases with 1,534 reported deaths

While the disease has been slow to reach Africa and spread through the continent’s countries, it is now showing signs to be picking up the pace, with a few countries reporting widespread transmissions as some go into full or partial lockdown.

The WHO has warned of 10 million cases on the continent within three to six months – however the number could be lower if outbreaks are swiftly contained.

According to the New York Times, 4.5 million children in South Asia have also already missed out on routine vaccinations that target diseases such as polio, diphtheria and measles.

The Prince of Wales has said Covid-19 ‘threatens to run riot and wreak utter havoc’ in vulnerable populations across the globe.

In a video message in support of a humanitarian organisation founded by Albert Einstein, Charles said 70 million refugees and displaced people in places such as Syria and Cameroon were most at threat from the disease.

The prince is UK patron of the International Rescue Committee (IRC) and has donated an undisclosed amount to its coronavirus appeal.

Charles, who has recovered from Covid-19 himself, said in his video message that the IRC’s staff and volunteers were working in areas of ‘conflict and crisis’ where hospital beds are a ‘rarity’ and ‘livelihoods are precarious even without the additional threat of this disease’.

He added: ‘In these places, the situation is desperately grave. Some 70 million refugees and displaced people are vulnerable in ways few of us can imagine.

‘Just think for a moment: How do you socially distance in a crowded, sprawling refugee camp? How do you protect yourself, and your family, from this virus when you don’t have basic access to soap and water?

‘How do you keep up hope when doctors and nurses are nowhere to be seen? The answer lies in organisations with the experience, the expertise and the determination to help in the most difficult circumstances imaginable.’

Charles went on to say: ‘The International Rescue Committee is working in those countries where the situation is most grave, where people are the most vulnerable and where this virus threatens to run riot and wreak utter havoc – if we let it.’

A new IRC report has estimated that without swift action, the world could see up to one billion infections and 3.2 million deaths due to Covid-19 over the course of the pandemic in 34 crisis-affected countries where the IRC works.

When Charles was self-isolating as he recovered from the coronavirus in March, he held a meeting, via telephone, with David Miliband, president and chief executive of the IRC.

Speaking after the call, the former foreign secretary said about the prince: ‘He was in very good spirits, he was obviously very engaged with the situation facing people in the UK.’

He added: ‘I was very struck about how he was very concerned about the global picture as well as his first priority being in the UK.’

The IRC responds to the world’s worst humanitarian crises with the aim of restoring health, safety, education, economic well being and power to people devastated by conflict and disaster.

Laura Kyrke-Smith, executive director of the IRC in the UK, said: ‘There remains a small window of time to mount a robust response to Covid-19 while it is still in early stages in fragile countries, which is why we are so grateful to have the Prince of Wales’s support at this crucial time and would ask those who can to join him in supporting our work.’