A white woman who was charged after she was filmed pulling a gun on an unarmed black woman and her daughters broke down in tears during a televised interview in which she describes how she feared for her life after the family blocked her from getting into her car and then started banging on it when she was inside.

Jillian Wuestenberg, 32, and her husband, Eric Wuestenberg, 42, have been charged with felonious assault stemming from the July 1 confrontation in Michigan, but they say they are the victims of ‘ethnic intimidation’ at the hands of Takelia Hill and her family.

Cellphone video captured the confrontation outside of a Chipotle restaurant in Orion Township, about 40 miles northwest of Detroit.

Jillian Wuestenberg can be seen outside her vehicle shouting, ‘Get the (expletive) away! Get away!’ while pointing a handgun.

She eventually gets back into her vehicle, which her husband drives away. 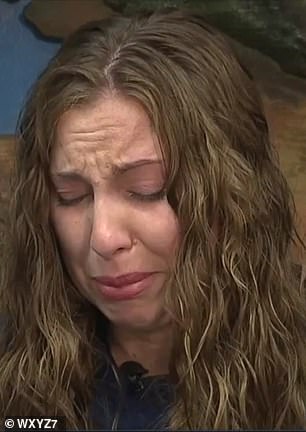 Jillian Wuestenberg (above) broke down in tears saying she feared for her life moments before she pulled a gun on a black woman and her family outside a Chipotle restaurant in Orion Township, Michigan, on July 1 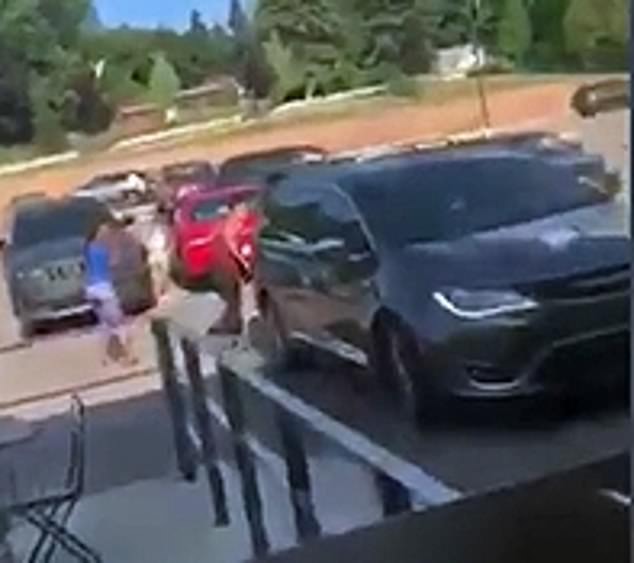 Video from a parking lot outside a Chipotle in Orion Township, Michigan, shows relatives of Takelia Hill, a black woman, standing behind Wuestenberg’s van moments before she gets out and pulls a gun. Jillian Wuestenberg claimed that the family blocked the vehicle and banged on it while she and her husband were inside 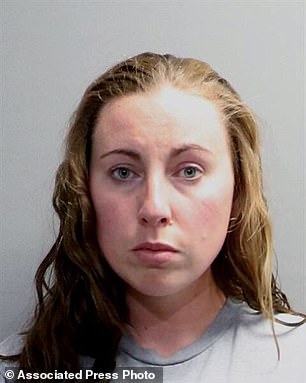 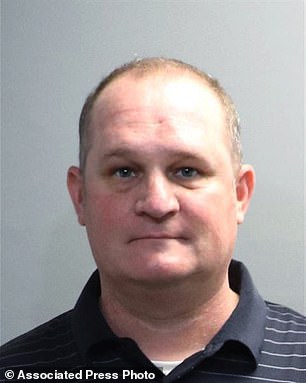 Jillian Wuestenberg (left) and her husband, Eric Wuestenberg, (right) were arrested after a handgun was pulled on a black woman and her daughters during a videotaped confrontation in a restaurant parking lot in Orion Township, Michigan, authorities said last week

Hill, who is black, has said the confrontation started when Jillian Wuestenberg bumped into Hill’s teenage daughter as they were entering the restaurant.

Jillian Wuestenberg told Detroit television station WXYZ on Thursday that she was fearful when the Hill family members blocked her from getting into her vehicle and then banged on the back of it.

‘Within moments, a second or two, I had multiple people within two feet of me and I just remember thinking I’m not going home tonight,’ Wuestenberg said.

She was asked what she meant to do when the video shows her loading a round into the chamber of her handgun and pointing it at the Hill family.

‘That meant I’m about to die and I don’t want to die,’ Wuestenberg said.

Christopher Quinn, an attorney for Takelia Hill, declined to allow her to be interviewed Friday by The Associated Press because the court proceedings are pending.

Quinn said the cellphone video taken by Hill does not show that the Wuestenbergs’ lives were threatened by Hill and her daughters, who were unarmed. 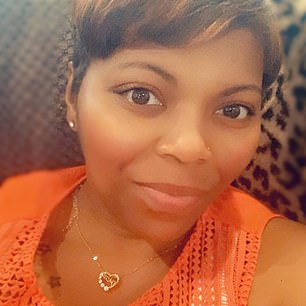 A shocking video, taken by the victim, shows a white woman pointing a pistol at Takelia Hill (pictured) and her daughter

‘There was no threat of using a weapon or physical force against (the Wuestenbergs),’ Quinn said.

‘They were in a position to leave the situation. They knew they had their firearms. They came out like Bonnie and Clyde and showed Ms. Hill and her daughters who were in charge.’

Dean Greenblatt, an attorney for the Wuestenbergs, said Friday that he believes Takelia Hill violated Michigan’s ethnic intimidation statute, which prohibits intimidation, harassment and violence based on a person’s race, gender and national origin.

Hill is heard in the video yelling profanities and threatening Jillian Wuestenberg, which included saying, ‘I will beat your white (expletive), too,’ Greenblatt said.

The Wuestenbergs also feared that their vehicle’s windows were going to be broken.

The video also shows that Hill ‘rushed up on Jillian Wuestenberg,’ he said.

‘That would give reasonable cause to believe they would get their white (expletive) beat.’

The white couple is from Independence Township and both have concealed pistol licenses. Deputies seized two handguns from the couple after they were detained on the night of July 1 following the encounter.

The three-minute video posted online shows part of the interaction.

Takelia Hill said that it happened after the white woman bumped into Hill’s teenage daughter Makayla as they were entering the fast food restaurant. 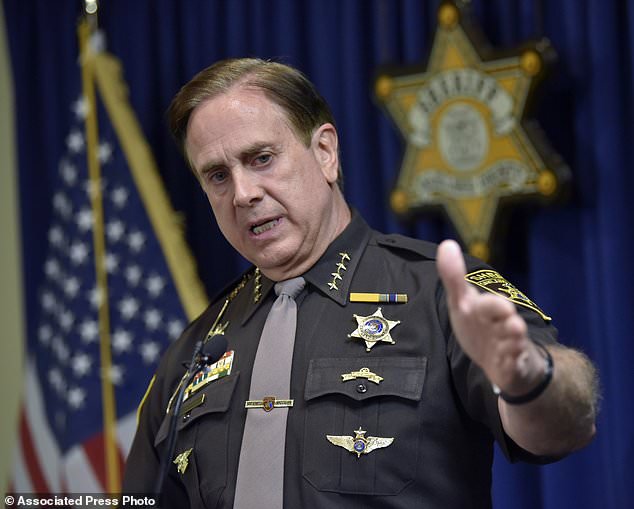 Speaking to The Detroit News, Makayla said: ‘Before I could walk into Chipotle, this woman was coming out and I had moved out the way so she can walk out.

‘She bumped me and I said, “Excuse you.” And then she started cussing me out and saying things like I was invading her personal space.’

The teenager called her mother over. ‘I walked up on the woman yelling at my daughter,’ Hill said.

‘She couldn’t see me because her back was to me, but she was in my daughter’s face.’

The later part of the altercation, which had moved to the restaurant parking lot, was then caught on camera.

Hill and her daughter can be seen arguing with Jillian Wuestenberg about how she had allegedly bumped into the daughter.

‘She did something wrong, she needs to apologize,’ Hill can be heard saying. 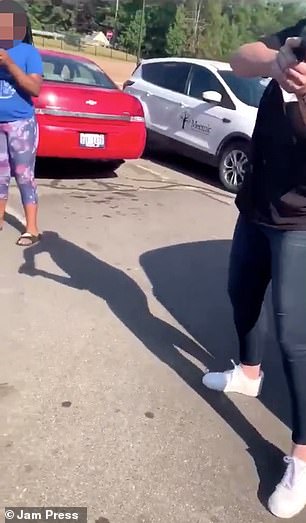 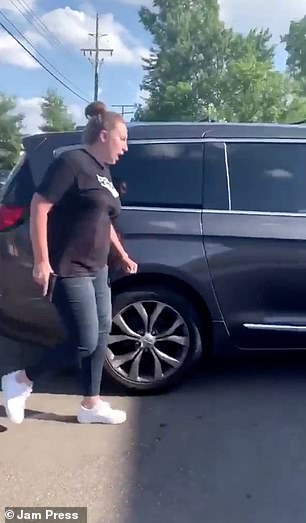 In the clip, Jillian Wuestenberg is heard saying: ‘Get away!’. She then walked back to the car and the pair drove away from the scene (right)

‘You’re blocking me from getting in my car,’ Wuestenberg replies.

Husband Eric Wuestenberg then proceeds to get out and open the door for the woman to get in as Hill and her daughter accuse her of being ‘ignorant’ and a ‘dumb a** b****’.

The two women then implore the husband to ‘do something’, to which he replies: ‘Who the f*** do you guys think you are? You called her names, she did nothing to you.’

As Eric Wuestenberg goes to get back in the car, the daughter can be heard telling him: ‘You’re very racist and ignorant.’

As the altercation continues, the woman says from the passenger seat of the car: ‘You can’t just walk around calling white people racist. This is not that type of world. White people aren’t racist, no one is racist.’

As Hill continues to ask the woman why she bumped her daughter, she responds: ‘I care about you and I’m sorry if you’ve had an incident where someone has made you feel like that.’

The car window is wound up and the pair go to drive away.

Hill is then seen behind the car and appears to punch the vehicle’s back window. It is unclear from the video how Hill came to be behind the car.

According to Hill, she thought the driver of the car was attempting to hit them so she knocked on the back window of his SUV to stop him.

The pair then emerge from the vehicle and the woman points a gun at her.

In the clip, she is heard saying: ‘Get away!’

Wuestenberg says: ‘Don’t you f***ing jump behind my car!’, shouting repeatedly: ‘Get the f*** back!’ pointing the gun straight at the victim.

She screams at people to get away from her and her vehicle.

A woman shouts, ‘She’s got a gun on me!’ and urges someone in the parking lot to call the police.

Wuestenberg then lowers the gun, climbs into the passenger seat and the vehicle drives off.

Hill said her other two daughters were in the car at the time of the altercation, which has left the family traumatized.

Oakland County Prosecutor Jessica Cooper said that her office viewed the available video and looked at the facts before filing charges.

‘It is an unfortunate set of circumstances that tempers run high over, basically, not much of an incident,’ she said of the initial alleged spark that caused the confrontation. 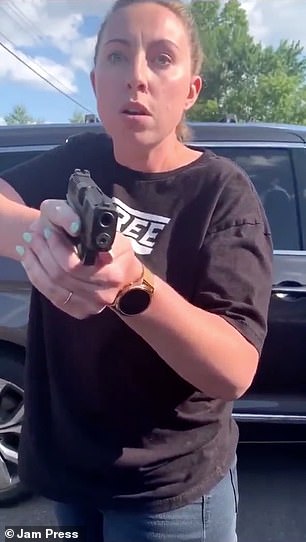 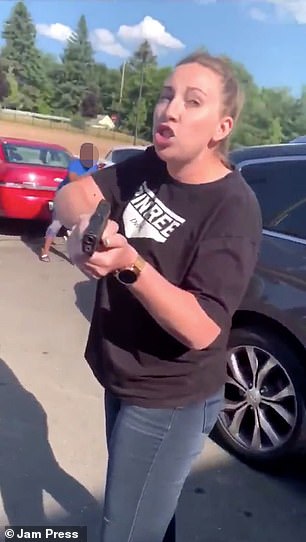 The shocking video, taken by the victim, shows Jillian Wuestenberg holding a pistol at a family with her hand placed on the trigger at a car park in Orion Township, Michigan

Bouchard said people are ‘picking sides’ and that threatening calls were made to the sheriff’s office dispatch center after the videos were posted online.

‘I would just say this, we are asking and expect our police – and rightfully so – to deescalate every situation they possibly can, and we should be doing that. But I would say that needs to happen with us individually in our own lives and situations, that we interact with each other and deescalate those moments.’