Americans who were vaccinated or infected with Covid earlier than last July may have weaker protection against the fast-rising XBB.1.5 variant, the White House said.

Dr Ashish Jha, the Biden Administration’s Covid response coordinator, said the chance of not catching the new strain ‘isn’t great’ among those people, but he expects protection against severe illness and death to remain high.

In a lengthy Twitter thread, he said the new variant – a spinoff of Omicron – had a ‘stunning increase’ in the US in recent weeks.

Figures show it makes up 40 percent of active US cases, per the Centers for Disease Control and Prevention (CDC) – up from just four percent at the start of December.

The fast-rising XBB.1.5 sub-variant (dark blue) now makes up 40 percent of Covid cases in the US, according to most recent CDC data 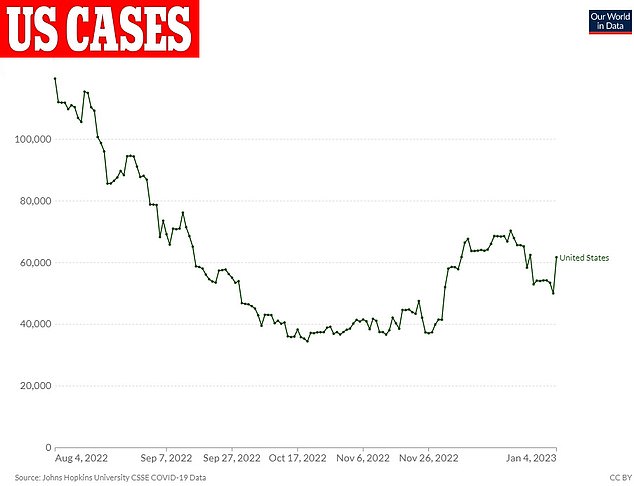 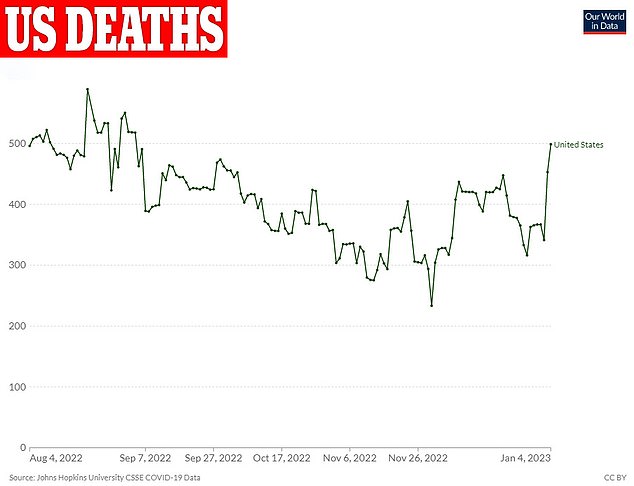 Dr Jha urged people to get the bivalent Covid booster – which were tailored specifically towards the Omicron variant and its sub-strains – though there are some doubts it does improve upon previous shots.

‘If you had an infection before July OR your last vaccine was before bivalent update in September… your protection against an XBB.1.5 infection is probably not that great,’ Dr Jha wrote in a 13 tweet thread.

The strain is a merger of the BJ.1 and XBB.1 variants – both sub-variants of Omicron that never took hold in the US.

Its mutations include one change that allows it to evade vaccine antibodies provided by the vaccine, and a second that improves its ability to bind to cells.

This allows it to be more infectious than previous versions of the virus and helps it evade vaccine immunity.

The Pfizer and Moderna bivalent shots received authorization from the Food and Drug Administration (FDA) in late Summer.

They were made to combat infection from the Omicron variant – and all of the sub-variants that emerged from it over the past year.

The original vaccines, which rolled out at the end of 2020, were tailored to the original Wuhan strain of the virus.

While Omicron how showed ability to evade the protection provided by the vaccines against infection, those inoculated with the original shots are still unlikely to suffer severe hospitalization or death.

It is currently unclear how effective the bivalent booster is against XBB.1.5 variant, and there are doubts over whether the new shot is better at preventing severe hospitalization or death from Covid than the original vaccine.

Experts assure the public that there is little to worry about the new strain.

Professor Paul Hunter, an epidemiologist at the UK’s University of East Anglia, told MailOnline this week the majority of new variants ‘fizzle out in a few weeks’.

Travelers flying into the United States will still need proof of Covid vaccination until at least April as officials stick with the failing pandemic policy.

The Transportation Security Administration (TSA) has quietly extended the requirement — which was due to expire this weekend — until April 10.

It means all non-US citizens will still have to prove they have received at least two vaccine doses — or an accepted single-dose shot like Johnson and Johnson’s.

The move makes America an outlier in the West, where most countries ditched so-called ‘vaccine passports’ months ago when they failed to keep infections low.

There are growing concerns that damaging Covid policies are creeping back into American life after hundreds of thousands of students were forced to wear face masks in class this week as schools brought back mandates.

The strain made up 40.5 percent of Covid cases sequenced by the CDC during the final week of 2022 – up from 21.7 percent a week earlier, and 10 percent two weeks earlier.

This rapid growth quickly overtook the BQ.1.1 variant – which many feared would take over as the nation’s dominant Covid strain by the end of the year. BQ.1.1 makes up 26.9 percent of sequenced Covid cases.

While these variants are believed to be more infectious than previous Omicron strains – they have not caused cases to rocket to the same levels as last year.

The US was recording nearly 600,000 new Covid infections each day at the start of 2022, as the initial Omicron wave swept across the country.

Now, cases figures are around one-tenth of what they once were – with the US logging 64,000 daily infections.

Covid death figures have not risen to great heights either, with America recording 457 per day – or less than one per every 100,000 residents.

Officials warn the number of Americans hospitalized with Covid is rising to worrying levels, though.

Around 46,000 hospitalized Americans are testing positive for the virus each day – the highest daily figure since August, when the BA.5 sub-variant caused an uptick in cases.

Dr Jha says that he is ‘concerned’ about the development of XBB.1.1, but does not consider it a major setback in the pandemic.

‘We can work together to manage the virus and if we all do our part we can reduce the impact it will have on our lives,’ he wrote.

He also notes that antiviral drugs like Pfizer’s Paxlovid are still believed to be effective against the strain.