The White House’s testing infrastructure has come under fire as President Trump, first lady Melania Trump, Hope Hicks, a press aide and a handful of reporters have tested positive for the coronavirus since Thursday morning.

The Daily Beast reported Friday that COVID-19 testing was inconsistent and the White House was relying on rapid tests that produce mixed results.

Additionally, the White House does not appear to be making any changes to its current virus protocol, as it will not move to a new testing system nor require mask-wearing.

White House press secretary Kayleigh McEnany is seen taking off her mask Friday in the White House lawn. On the heels of the president and first lady testing positive for the coronavirus, there are questions about the White House’s testing capacity and mask policies 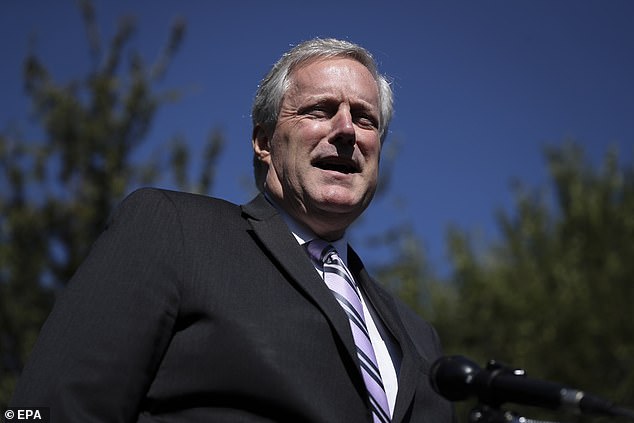 A senior administration official told the Associated Press that masks continue to be a ‘personal choice’ for staff – despite overwhelming evidence that they help stop the spread of COVID-19.

At the White House Friday, the pool reporter noted that White House staff was more masked than usual, but some major players, like Chief of Staff Mark Meadows, talked to reporters bare-faced.

‘I’ve obviously been tested, we’re hopefully more than 6 feet away, and if there’s any concern there from a guidance standpoint – we have protocols in place,’ Meadows told reporters.

And then they ‘went into the West Wing for meetings,’ Troye said.

Troye called out Trump’s cavalier attitude about the virus – and criticized th administration, overall, for not practicing what medical experts preached.

‘We should be protecting the president and the White House. We shouldn’t be sitting on top of each other in the Situation Room in meetings, like we were for so long,’ Troye told the Beast.

‘It was a frustrating thing to watch and happen because there are still people on the White House staff who I know very well who don’t take it seriously,’ she continued. ‘ou walk into the West Wing, there are signs saying you should be wearing masks, but hardly anybody followed the protocol. And even when you did wear a mask, it felt awkward.’

‘I’m actually surprised that it took this long,’ said the ex-staffer, who now supports the election of Democrat Joe Biden.