Covid cases are on the rise in the U.S., reaching their highest point of the spring season on Monday after a sharp weekly increase, though the nation’s top health officials are assuring Americans that the there still is not much to worry about.

Dr Ashish Jha, the White House Coronavirus Response coordinator, told NPR on Monday that the country is still in a much better place now than it was in previous months, mainly because of the high vaccine and booster uptake in the U.S.

America is currently averaging 50,280 cases per day, an increase of nearly 50 percent over the last seven days and the highest daily average since early March. Part of this climb is because of a massive Covid case backlog that entered the ledger on Friday, with more than 100,000 cases reported on a single day nationwide.

Despite the uptick in case, death figures still remain low, with 374 Americans dying from the virus daily – a 17 percent drop over the last seven days and keeping the lowest death figure trends since August intact. 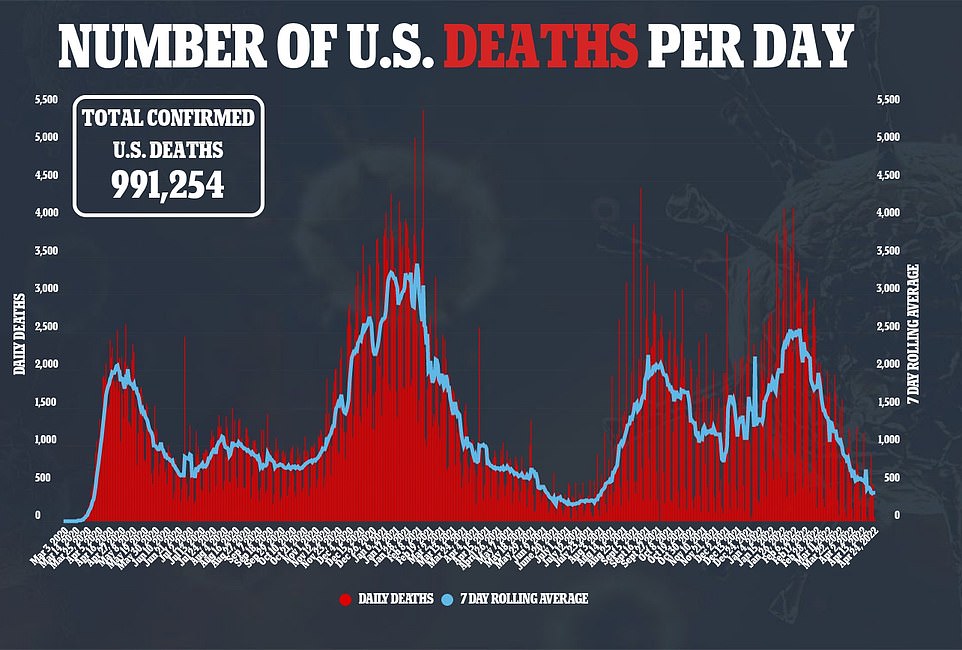 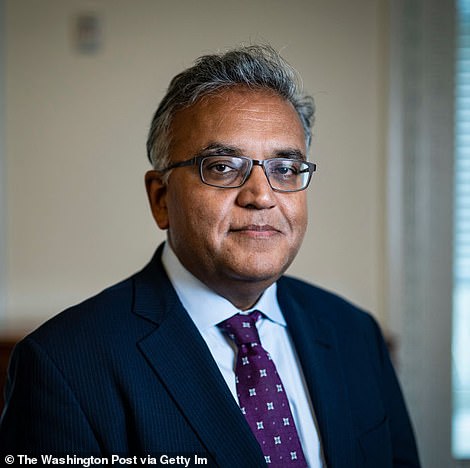 Dr Ashish Jha (pictured), White House Covid response coordinator, told NPR on Monday that despite rising cases the country is in the a good place

‘I do think we are in a much better place then we’ve been in the past.’

While cases have significantly increased in recent days, clearing the 50,000 mark after spending much of late-March and April in the 30,000s, the figures are still nowhere near large enough to be considered a surge of the virus.

One the winter, for comparison, the winter Omicron surge peaked at 800,000 cases per day –  meaning daily figures have still dropped 94 percent since the virus’s peak.

Deaths are also at their lowest point since just before the Delta variant surge last summer, and hospitalizations – while an unreliable figure overall –  have also hovered near a pandemic-low 15,000 per day in recent weeks.

As Jha says, the prevalence of the COVID-19 vaccine in America is largely responsible for the slowing mortality of the virus. Nearly 90 percent of American adults have received at least one shot of the vaccine, with one-third of the population also receiving a booster dose. 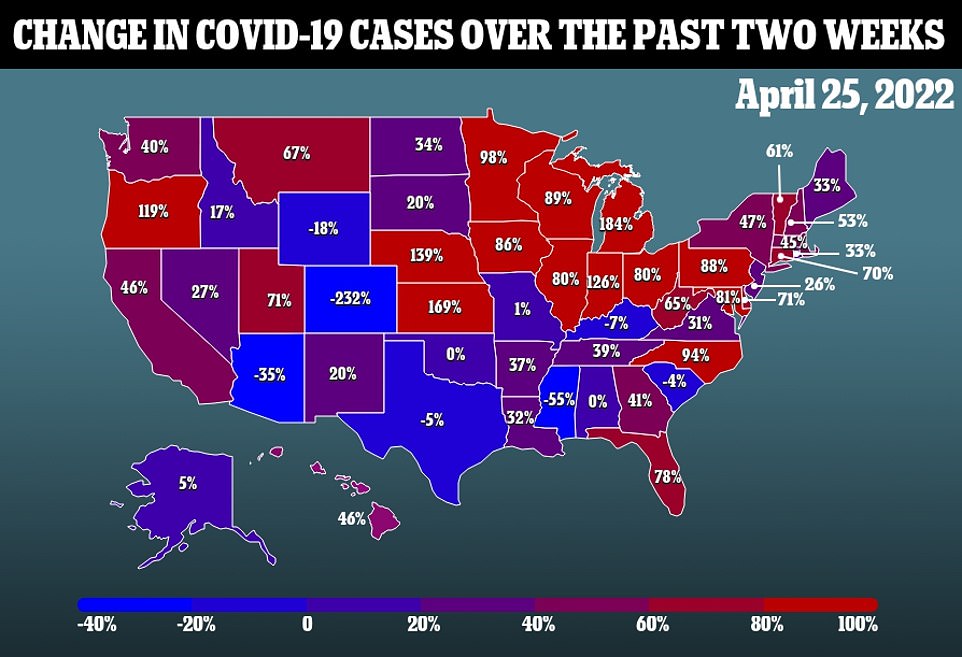 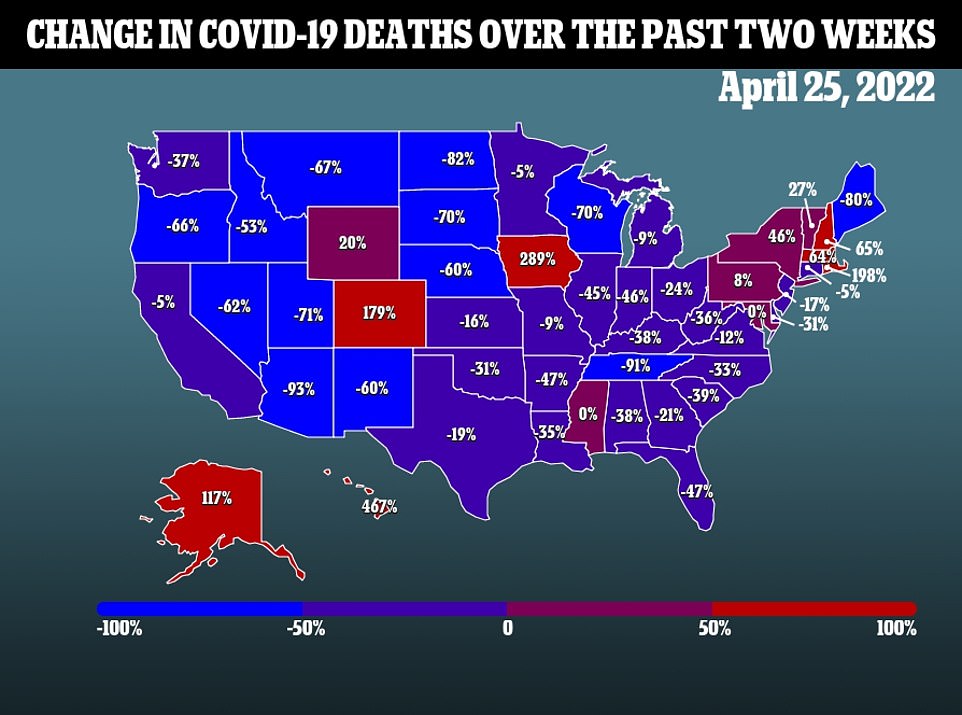 The assurances come as the Centers for Disease Control and Prevention (CDC) officially has begun tracking a new COVID-19 variant, the BA.2.12.1, a sub-variant of the BA.2 ‘stealth’ variant, which is in itself a variant of Omicron.

Last week, the CDC included the BA.2.12.1 variant on its NOWCAST, with the strain making up 19 percent of sequenced cases in America. The sub-strain falls within the BA.2 lineage – which is in itself a sub-strain of the Omicron variant.

Little is known about this version of the virus, though it is believed to have a 27 percent growth advantage over the original version of BA.2, though there is no evidence that it is more severe than its predecessor.

The BA.2.12.1 variant was first detected by officials in New York last week. The CDC reports that the strain is now dominant in the region – which also includes neighboring New Jersey – making up 52.3 percent of cases.

Since the discovery of the variant, Covid cases in New York have begun to grow, recording a 66 percent jump of the past two weeks.

New York City is recording increases as well, with daily case figures up nearly 50 percent over the last 14 days.

The CDC designated region that includes New Jersey and New York is the only one in America to have BA.2.12.1 be the dominant strain. 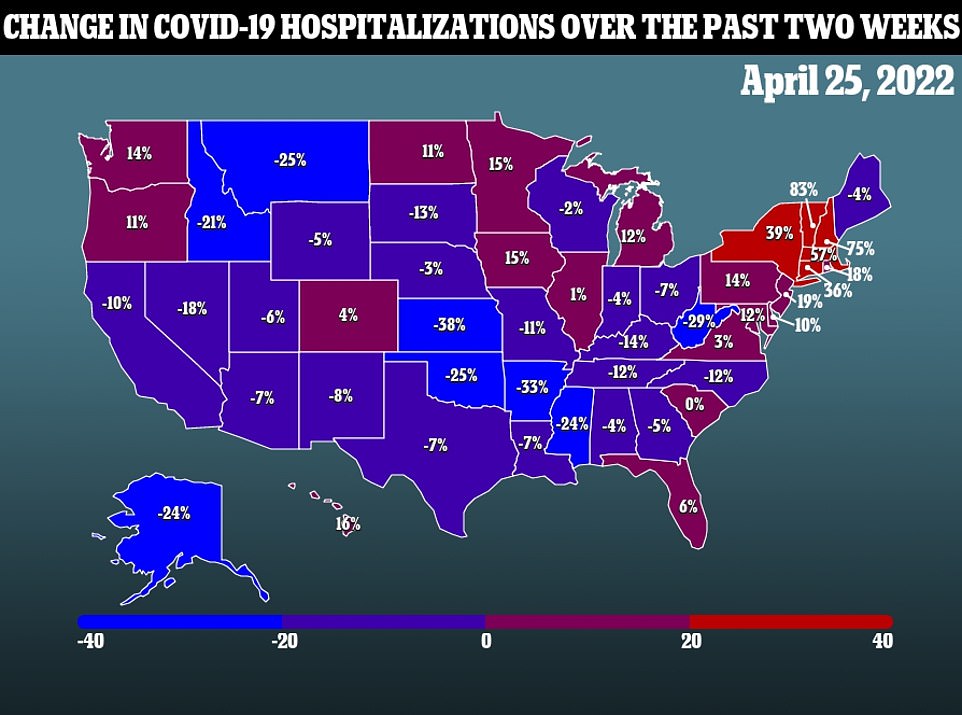 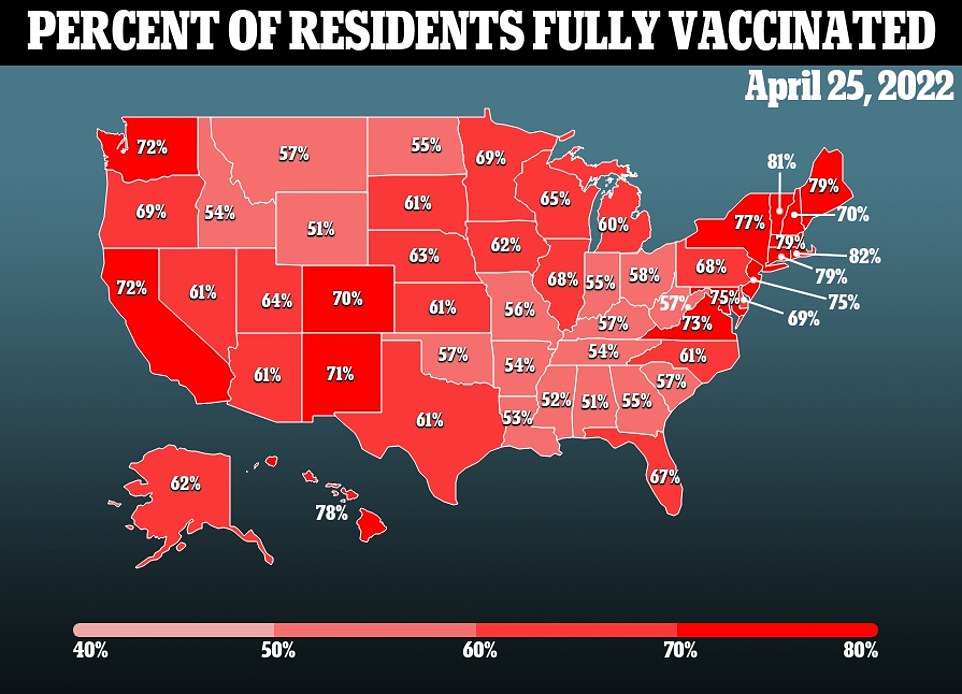 Other areas where the new Omicron strain has made grounds include the mid-Atlantic, which includes Virginia, Maryland, West Virginia, Pennsylvania and Delaware, where it accounts for 23 percent of sequenced cases. It also makes up around 20 percent of cases in New England and in the Deep South.

The CDC, which has been more cautious than many others throughout the pandemic, is also noting the receding of the pandemic in its figures as well. According to the most recent update from the CDC, less than one percent of counties in the are U.S. considered to be of ‘high’ Covid risk.

Only 14 counties in the U.S. – less than 0.5 percent of America – are considered to be of ‘high’ Covid risk. 13 of the counties are in New York, with the remaining one in Kansas.

There is no information on whether the new strain, which is dominant in New York, is responsible for the higher transmission risk.

Earlier this year, the CDC revised its Covid risk calculations to value hospitalization rates over all else, moving on from previous metrics where only daily infection figures were used. 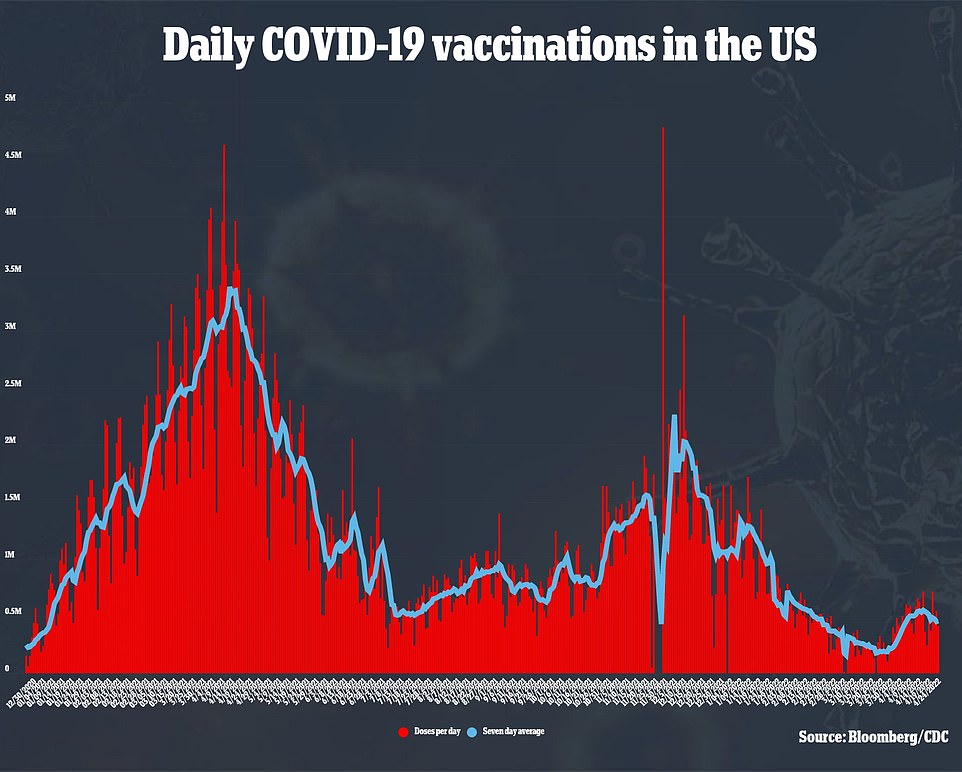 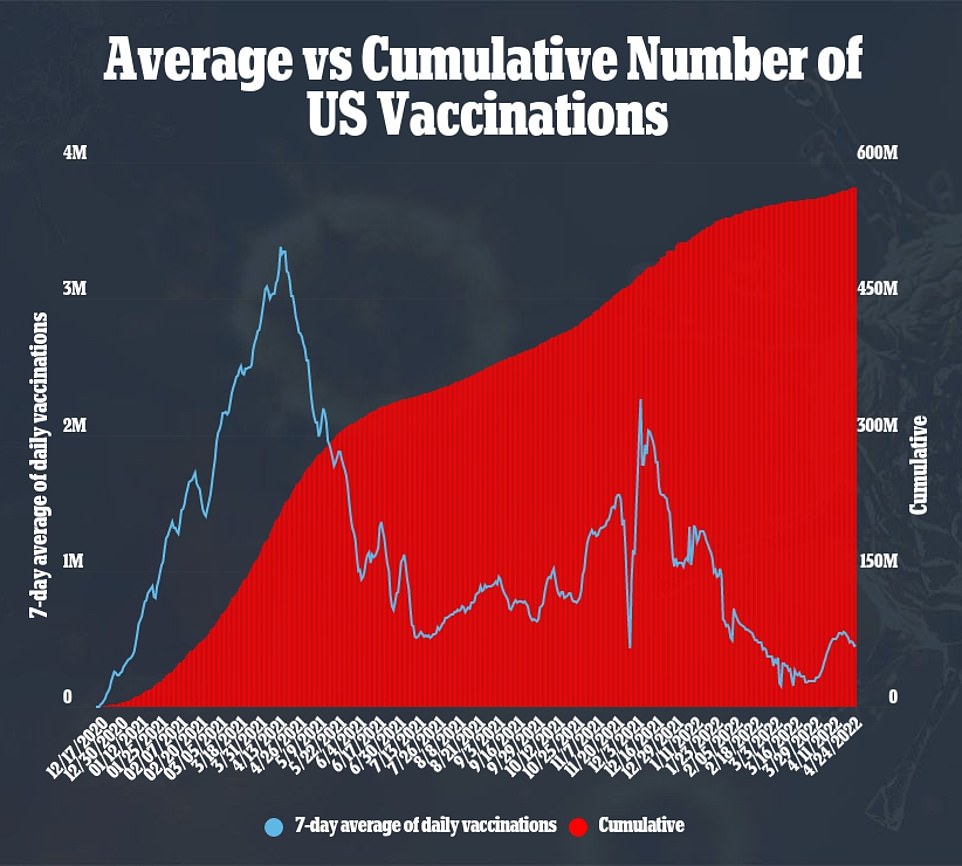