Whitbread profits have bounced back above pre-pandemic levels, thanks to looser coronavirus restrictions prompting a resurgence in stays at Premier Inn hotels.

The hospitality business made £233.9million in statutory profits over the six months ending 1 September, compared to £172.2million in the equivalent period three years ago and a £37.8million loss last year.

Sales in its UK Premier Inn division outperformed the wider mid-scale and economy accommodation market, doubling to £1.3billion as the sector benefited from a lack of lockdown rules and foreign tourists returning in droves.

Earnings: Whitbread made £233.9million in statutory profits over the six months ending 1 September, compared to £172.2million in the equivalent period three years previously

Growth was not just driven by rebounding leisure and business travel demand but also an increase in new venues and average room prices, with the latter up 40 per cent year-on-year.

This strong demand has continued into the third quarter, with hotel revenue more than a third ahead of 2019 levels, although the company’s food and beverage sales have not fully recovered.

Whitbread predicts its restaurant sales will not exceed pre-Covid figures during the current fiscal year despite launching a series of initiatives to try and attract customers, including a larger drinks offering and upgrading its gardens.

The trading update comes at a time of significant uncertainty across the hospitality industry, which is being heavily impacted by soaring energy bills and squeezing consumer incomes.

The FTSE 100 company, which also owns the Beefeater and Brewers Fayre restaurant chains, warned that inflationary pressures and the traditional fall in seasonal hotel demand would depress margins in the short term.

Higher labour, utilities, and food and beverage prices, as well as IT and marketing investments, are forecast by the group to add an extra £60million in costs this year. 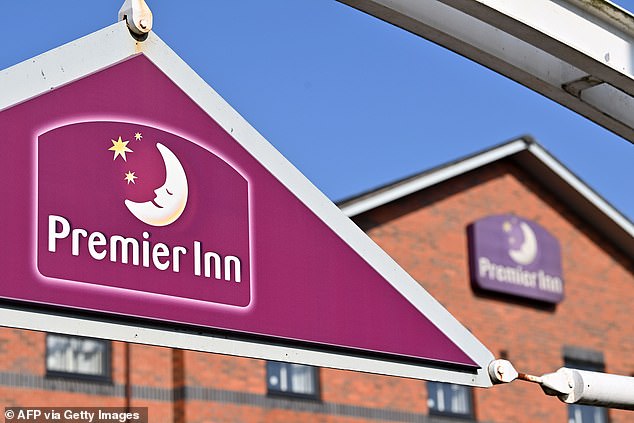 Resurgence: Growth in hotel sales was not just driven by rebounding leisure and business travel demand but also an increase in new venues and average room prices

Yet the strong result has enabled the firm to announce £49million in dividend payments after paying out no interim dividend last year when much of the world was still under onerous Covid-19 restrictions.

Allison Brittain, chief executive of Whitbread, said: ‘Despite macroeconomic uncertainties, our current trading performance is strong, and our business has proven its resilience in previous downturns.

‘With a robust balance sheet and significant growth potential in both the UK and Germany, we remain confident in the full-year outlook and our ability to deliver long-term value for all our stakeholders.’

Brittain is due to depart the company at the end of February to become the first female chairman of the Premier League, succeeding interim chair Peter McCormick.

McCormick’s predecessor, Gary Hoffman, lasted only 18 months in the job and his tenure was marked by controversy over Newcastle United’s sale to Saudi Arabia’s sovereign wealth fund, the Public Investment Fund.

Just before Brittain was announced as the next Premier League chair, she faced a major shareholder revolt over her £2.16million annual compensation package, which followed Whitbread posting a £15.8million loss.

Whitbread shares also remain around 31 per cent below their value when she took over. On late Tuesday morning, they were 0.34 per cent higher at £26.20.