EXPRESS INFORMER > Science & Technology > Which of these cards would YOU pick? Magic trick study reveals two-thirds of us choose the same card

Which of these cards would YOU pick? Magic trick study reveals two-thirds of us choose exactly the same card – see if you could foil a magician

By Victoria Allen Science Editor For The Daily Mail

Not everyone can pull a rabbit from a hat or discover a hidden coin behind someone’s ear.

But when it comes to card tricks, you don’t have to be a magician to predict which card someone will choose.

Scientists have discovered that, when faced with four cards and asked to choose one, most people will pick the third from the left.

You don’t have to be in the Magic Circle to figure out that most of us are just plain lazy, meaning right-handed people tend to choose the playing card which is closest to their hand.

Which of these cards would you pick? A magic trick study has revealed that two-thirds of us choose exactly the same card

A new study has revealed that magicians could be unconsciously trying to make their viewers blink, so that they miss the deceptive action that would give their trick away.

This is because they have been found to increase their own blinking during these moments, which could encourage their audience to do the same.

Lead author Dr Anthony Barnhart used to be a professional magician himself, and was alerted to this blinking tendency by other performers.

He and colleagues at Carthage College in Wisconsin, USA tested the theory by recording magicians perform a coin trick and noting when they blinked.

They found that the performers did increase their blinking during actions of deception, but only when in front of a video audience.

And people have an innate dislike of ‘edges’, so prefer to choose objects from the middle rather than the end of a row.

A scientific study involving Goldsmiths University of London asked 60 people to pick a card, any card, from four options.

Psychologists proved that two-thirds using their right hand would choose the third card from the left – which happened to be the seven of diamonds.

Dr Gustav Kuhn, first author of the study from Goldsmiths, said: ‘We know from previous research that people are more likely to select an object from the middle of a row, and to select objects that are convenient to reach. Essentially, we’re quite lazy.

‘The interesting part is that we are often completely oblivious to the choices we make, and erroneously think that we are in full control of our thoughts and actions.

‘Most people have no idea that they are far more likely to choose the third card from the left.’

Previous studies have shown magicians can lead people to choose a card by watching the direction of their hand, then surreptitiously pushing the chosen card into it.

Another trick is to fan out a set of cards quickly so that one is visible for longer, in which case people tend to unconsciously choose it.

But the most simple card tricks can depend on people’s unwillingness to reach very far, the new study published in the journal Consciousness and Cognition suggests. 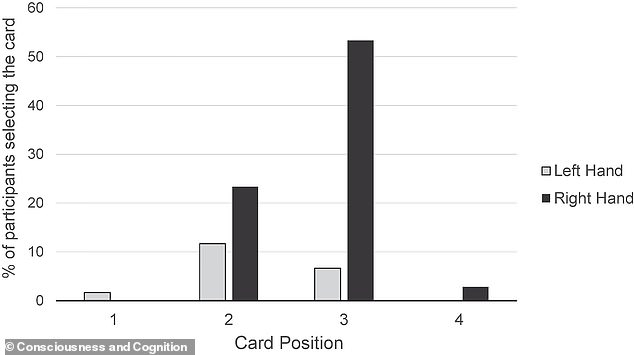 Pictured: Percentage of individuals who chose playing cards in the four different positions as a function of the hand they used to make the selection

Researchers from Goldsmiths and Tsinghua University in China asked 60 people aged 18 to 25 to push forward one of four playing cards laid out on a table.

If they were really choosing at random, just a quarter of people would go for the third card from the left, but in fact 66 per cent of right-handed people did so.

The result is partly explained by people’s aversion to ‘edges’, which means we tend to take groceries from the centre of the supermarket shelf and, asked to rate our happiness in surveys, will rarely say zero or 10 out of 10, but go for a middle number.

The preference of people for the third card is simply because this is the ‘path of least resistance’, as it is closest.

People in the study who chose the third card were truly oblivious as to why, rating their freedom of choice in making the decision at nine out of 10 on average.

When asked how the trick was done, some said they must have been ‘manipulated’ in some way, while others put it down to chance or the researcher watching their eyes. People who chose the third card only expected that 38 per cent of people would make the same choice they had.

Magicians increase their EYE BLINKING during moments of deception

Blink and you’ll miss it! Secret trick that allows magicians to unwittingly fool their audience is revealed

Sleight of hand is one of the oldest techniques used by magicians to fool their audiences, but it seems they may have another trick up their sleeve to help them deceive those watching them.

Performers have been found to unwittingly make their audience blink at key moments during a show, causing them to miss key actions that could reveal how an illusion was done.

New research has revealed that the secret behind a magicians’ patter lies in its ability to relax members of the audience.

It found this strategy causes those watching to lose concentration, leading them to blink more often.

This means as the magician rapidly moves their hands to disguise a trick, many people in the audience actually have their eyes closed, say the researchers.