EXPRESS INFORMER > Travel > Whether you desire art, yoga or a pool outside your door, here’s how to find bliss in the Balearics

It’s still balmy in the Balearics in October, with temperatures in the low to mid-20s, and where you can still find secret shores lapped by crystal waters, as well as pine and vine-filled interiors.

There’s something for everyone, from hiking in the hills to chilling on the beach, a raft of new properties including a Six Senses spa on Ibiza and an art hotel in Majorca, plus a Hauser & Wirth art gallery in Minorca. These days the islands are more about laid-back chilling than party thrilling.

IBIZA: CAVE SUITES, COOKING AND COCKTAILS (WITH A DJ, OF COURSE)

The original party isle, Ibiza has been doing a lot of growing up over the past few years, with a new breed of hip hotels where quality, not quantity, is what it’s all about. There’s still music in the air, but it’s more chilled rhythms than rave anthems.

And it comes with a healthy side serving of wellness, too, often with more than a nod to sustainability.

A case in point is the Six Senses Ibiza, which opened in the summer on the quiet northern tip of the island at Cala Xarraca. With 116 rooms, ‘cave suites’ and villas in light woods and stone, it has been built to strict environmental standards, with not one but four organic restaurants supplied from its estate.

Chill out in the spa or do yoga on the outdoor deck, take a cooking class or just admire the sea views from the infinity pool. For a taste of Ibiza’s party spirit, the Live Cave has its own recording studio and plays music at the shorefront bar and lounge. A week’s B&B is from £2,300pp with flights on BA (scottdunn.com).

Whether you’re after juice and yoga or cocktails with a DJ beat, it’s on offer at the new 184-room Oku Ibiza. Derived from the Japanese spiritual and architectural concept meaning ‘inner space’, Oku is all about understated luxury, with plenty of natural materials, including bamboo and rattan.

It’s a short walk to the shore at Cala Gracio for a dip in the sea, or you can paddle straight from your door if you book a room opening on to one of three resort pools (one for adults only). A week’s B&B is from £875pp (bestattravel.co.uk). 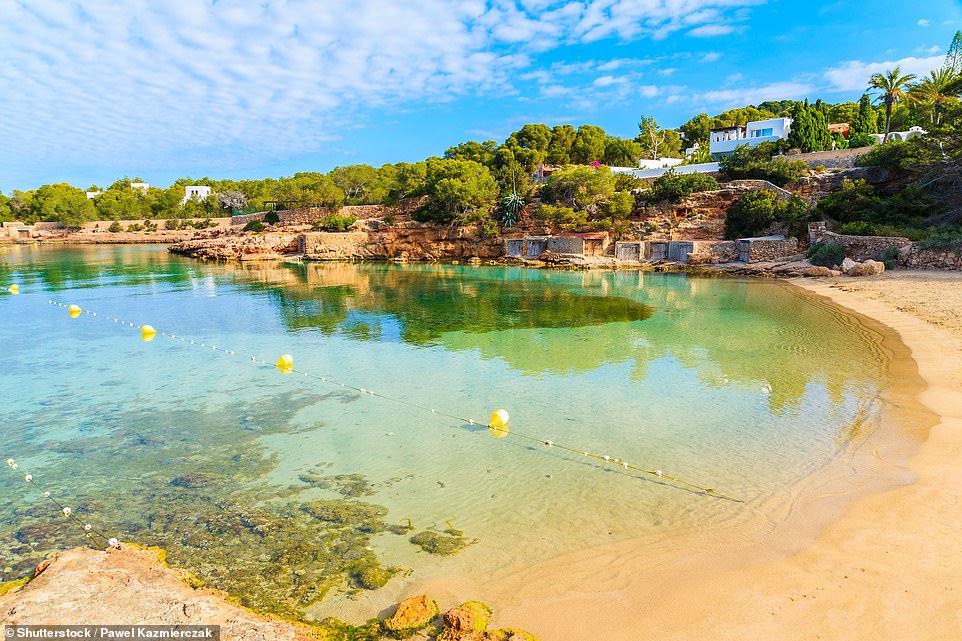 For tranquillity in Ibiza’s interior, look no further than Can Lluc Agrotourism Hotel, with 20 rooms and villas set in bougainvillea-filled gardens surrounded by pine forests. Yoga and meditation classes are held outside, in sight of the Ibizan hills and olive trees, and there’s a pool and outdoor hot tub. A week’s B&B costs from £816pp, with flights (tui.co.uk).

Activities from cliff-diving, kayaking and a 12-mile bike ride along the coast are on offer at clifftop 7 Pines Resort in the west of the island. Although it’s large, with 185 suites, it still manages to feel intimate as it has been laid out like a typical whitewashed Ibicenco village.

A week’s B&B in a one-bedroom suite with flights and transfers costs from £1,275pp (inspiringtravelcompany.co.uk). 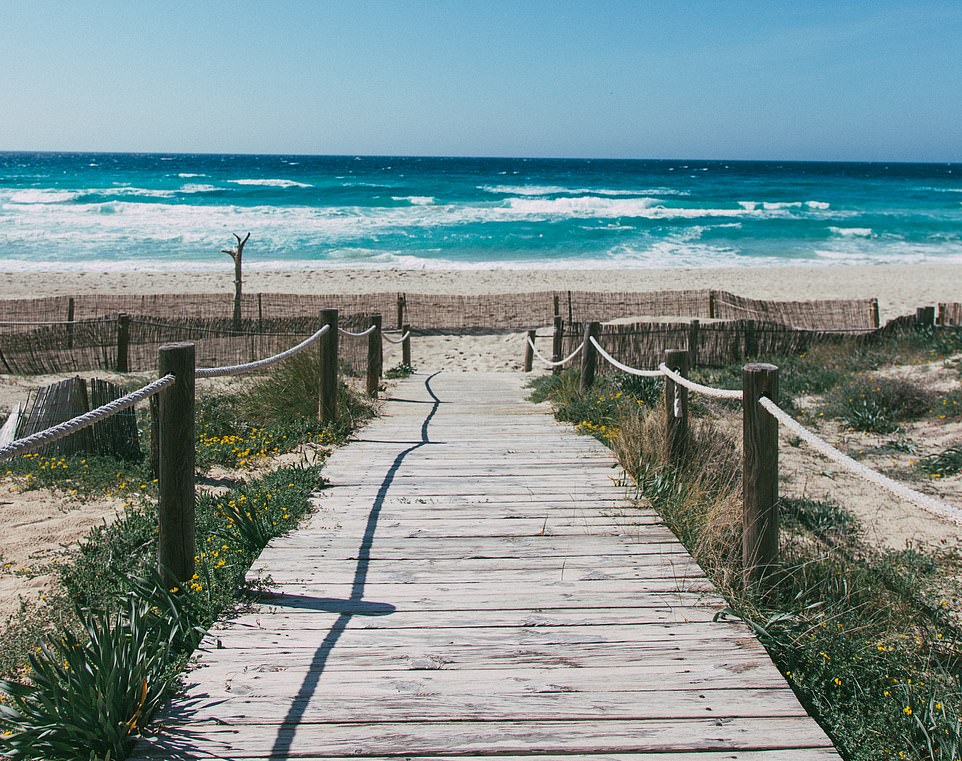 Path to paradise: Migjorn beach is near Casa Pacha, which has 14 rooms with stunning sea views

Alternatively you could push the boat out – literally – and hire one of the hotel’s three motor cruisers for a day trip in style to Ibiza’s little sidekick of Formentera. Boat charter with a captain costs from £2,575 a day.

Appreciate Formentera’s white sand and translucent water for a bit longer at the new 14-room Casa Pacha. Set on the island’s longest beach, the Migjorn, the house’s neutral-tone rooms have stunning sea views from private terraces or balconies.

Enjoy a massage under the pine trees, try yoga on the rooftop and sit with your toes in the sand at the beach restaurant. B&B doubles from £336 a night (casapacha.com). 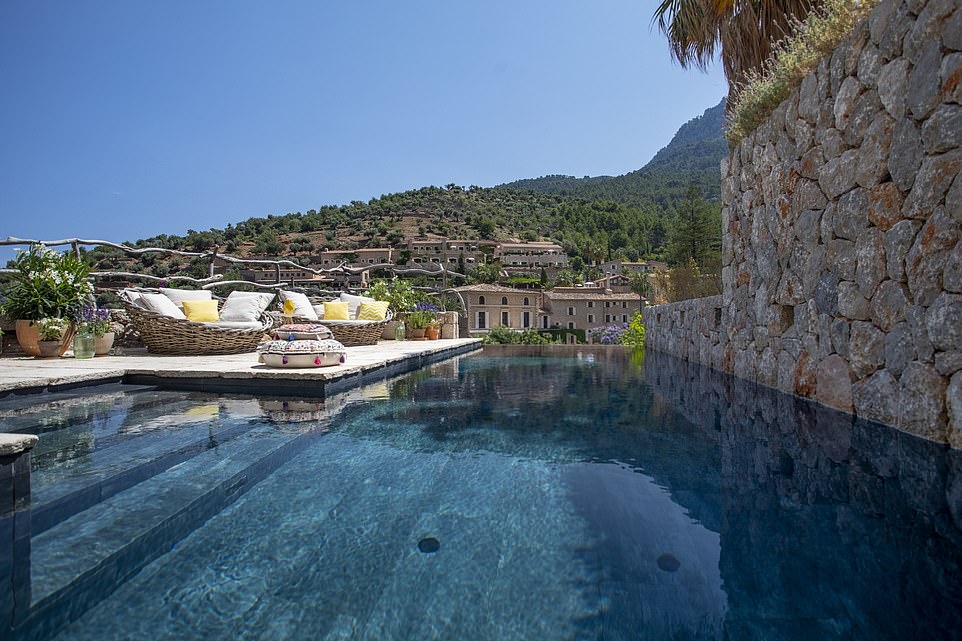 Indulgent: The pool and terrace Casa Noa, which is located in the hilltop village of Deia 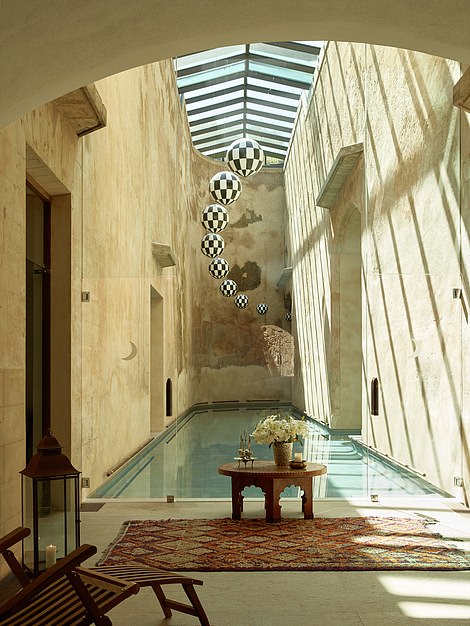 The pool at Cap Rocat – a 19th Century fortress

Leave the crowds and big hotels behind and head to the unspoilt north-western coast, with its dramatic Tramuntana Serra mountains. It’s a walkers’ paradise here, with clusters of honey-coloured houses scattered among craggy limestone peaks.

You can explore it from the traditional agro turismo Ca’s Curial in Soller, which has just eight suites, each with a lounge area or terrace.

Set off on gentle walks of anything from three to seven miles a day, following ancient cobbled trails that wind through wooded valleys and terraces of olive and citrus groves. Or take local trains, buses and trams to explore Deia, Fonalutx or Valldemossa before returning to the hotel’s large outdoor pool surrounded by an amphitheatre of mountains. Dinner is included on two nights. A week’s B&B costs from £1,145pp, flights extra (inntravel.co.uk).

For a more sedentary style of holiday in the same area, the four-bedroom Casa Noa villa in the hilltop village of Deia has both sea and mountain views. Wander down to the shingle beach of Cala Deia for a morning swim before picking up fresh bread from the bakery to enjoy on the poolside terrace. A week for eight is from £5,412 (scottwilliams.co.uk).

It would be a crime for Agatha Christie fans to ignore the Hotel Illa d’Or, along the coast from Deia in the charming resort town of Puerto Pollensa. It was in this graceful waterfront hotel that the author wrote her book Problem At Pollensa Bay.

Although the hotel dates from 1929, rooms have been given a swish tan-and-cream makeover and many come with sea views.

The beach is steps away, and the hotel has its own sailing boat for excursions. Or walk along the pine-fringed path to the centre of Puerto Pollensa for watersports and restaurants. A three-night B&B mini-break costs from £548pp, with flights (tui.co.uk). 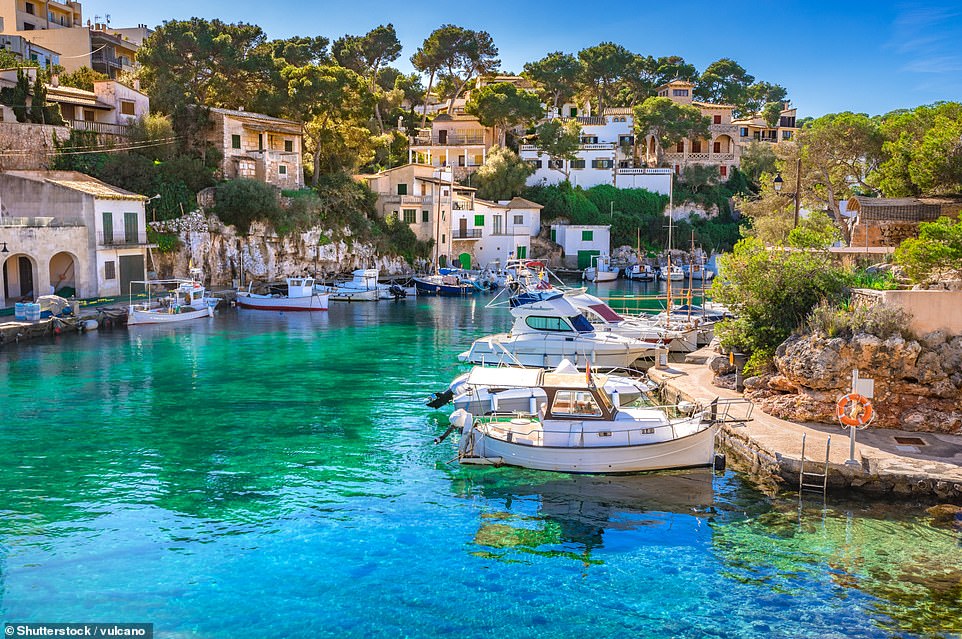 Can Ferrereta, a new 32-room hotel, is located in the traditional town of Santanyi (pictured)

Art-lovers, meanwhile, will be in their element at the new 32-room hotel of Can Ferrereta in the traditional town of Santanyi in the island’s south-east corner. An enormous 44-stone visage sculpture by Spanish artist Jaume Plensa near the outdoor pool sets the tone. More artworks, including some from Joan Miro, are scattered throughout the light and airy interiors of this restored 17th Century mansion. Book a boat trip to the maritime nature park of Cabrera, famous for its unspoilt beauty. A week’s B&B is from £3,175pp with BA flights (carrier.co.uk).

You could make the trip twin-centred by bookending your stay with a night or two in Palma at Can Ferrereta’s sister property, the Sant Francesc Hotel. Set in a 19th Century mansion with plenty of original frescoes and mouldings, and within walking distance of the galleries and cafes, Sant Francesc’s piece de resistance is its spectacular rooftop pool and hot tub with views over the Basilica, the old town and Palma Bay. B&B doubles are from £289 a night (hotelsantfrancesc.com).

For a truly indulgent break, Cap Rocat – in a 19th Century fortress with stone bridge, crenellated gates and subterranean pathways – takes some beating. Built on a private peninsula with panoramic views over Palma Bay, it has suites that would not look out of place in a Bond movie. There’s an infinity pool among the battlements, a secluded beach nearby and a spa carved 40ft down into the limestone, where a full-size swimming pool lies beneath a glass ceiling. A week’s B&B, with flights, is from £3,199pp (ba.com). 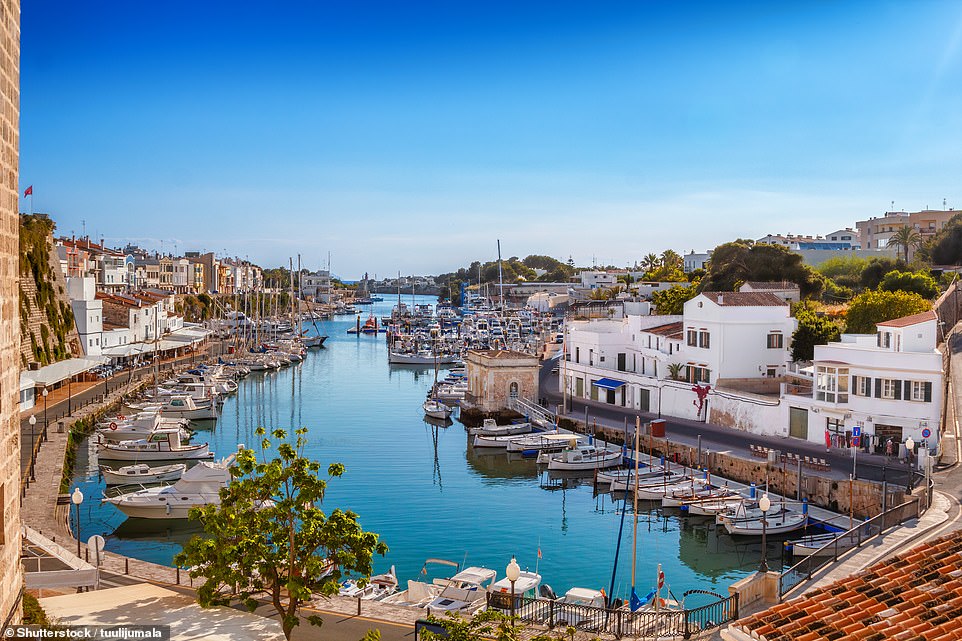 La Tanca, one of the 17 villas run by Vintage Travel, is a ten-minute drive from the historic harbour city of Ciutadella

More serene and less-well-known than Majorca and Ibiza, the sleepy unspoilt idyll that is Minorca has more than 70 beaches. This year it added culture to its coastline, with the opening of a Hauser & Wirth gallery. In a former naval hospital on the Isla del Rey, a 15-minute boat ride from Mahon, the gallery includes a garden, outdoor sculpture trail and restaurant (hauserwirth.com).

Stay at one of the 17 villas run by Vintage Travel on Minorca, such as La Tanca, which is a ten-minute drive from the historic harbour city of Ciutadella, with its atmospheric squares, and about a mile from the sheltered bay of Cala Morell.

The modern three-bedroom villa with beamed roofs has a wide, covered terrace for alfresco dining looking on to a private pool and beautifully tended gardens.

A week for six is from £998pp (vintagetravel.co.uk). Flights cost extra.

Also by the beach is Pierre et Vacances’ adults-only holiday village, set on the clifftops of Binibeca. The 149 simple rooms and apartments, some with terraces overlooking the sea, share three pools, a restaurant and a spa. A week’s B&B in a double room costs from £479pp until October 12, when it closes (pierreetvacances.com).

In the island’s green hinterland, a number of rural fincas have been converted into chic boutique hotels.

Among them is Torre Vella Fontenille, an old fortified watchtower and former farm buildings ten minutes from the beach. It has 17 rooms and a pool that looks on to olive trees. 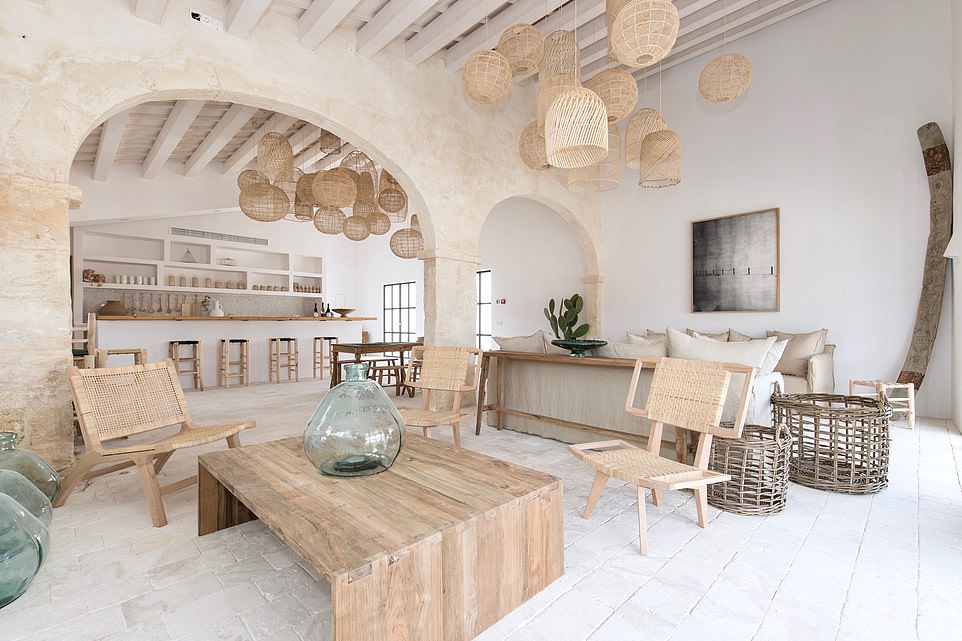 Inside Torre Vella Fontenille, a former fortified watchtower that has been transformed into a chic bohemian retreat

Enjoy an alfresco massage and clifftop yoga, or book cycling or cave exploration. B&B from £167pp per night (fishandpips.co.uk).

Just a little further inland, Torralbenc is surrounded by fields of rolling vineyards which supply grapes to make the finca’s own-label wine.

The whitewashed restored farm buildings house a 27-room hotel with sandstone floors and pale wood furniture, and there are two cottages for those wanting a little more space. It’s a 20-minute bike ride to the nearest beach but there are sea views from the rooms and pool, and the hotel has its own boat for excursions.

Alternatively, set out on horseback through the vineyards on part of the Cami de Cavalls trail around the island.