Six million more people in England are poised to be stung by Tier Three lockdown restrictions this week amid spiralling coronavirus cases, as Number 10 continues to rely on its ‘whack-a-mole’ strategy to contain the disease.

Residents in the West Midlands, North East and West Yorkshire look set to be the next dragged into the toughest bracket of measures, which bans people from socialising with family or friends and sees pubs forced to shut completely unless they are serving ‘substantial meals’.

It means 14million people across England could be living under the toughest coronavirus-controlling curbs by the weekend. Currently there are 8million residents in Tier Three towns, cities and boroughs in Greater Manchester, Liverpool, Lancashire and Nottinghamshire.

Last night, Nottinghamshire was put into a Tier Three lockdown and became the first county to agree to a ban on selling alcohol after 9pm if booze is bought to consume off premises. There are fears it has set a precedent and that other regions could be forced to comply with restrictions that go above and beyond standard Tier Three measures.

Leaders in West Yorkshire have denied they are in a ‘stand-off’ with Number 10 over plans to plunge 1.8million people in the region into a Tier Three lockdown. Bradford Councillor Susan Hinchcliffe insisted the crunch talks were not at an impasse, despite rumbling on for three days with little progress.

West Yorkshire is poised for tougher restrictions after routine NHS operations were cancelled at one England’s biggest trusts in Leeds when Covid-19 patients on wards reached levels higher than in the April/May peak.

In the West Midlands, Birmingham, Coventry, Dudley, Sandwell, Solihull, Walsall and Wolverhampton – which are already in Tier Two – could all be upgraded to a tougher bracket within days, unless infection rates drop rapidly.

West Midlands Mayor Andy Street and the leaders of the seven metropolitan councils had been discussing the prospect of Tier Three measures ahead of a gold command meeting with Health Secretary Matt Hancock yesterday.

Following the meeting, local authority sources said it was ‘pretty unlikely’ infection rates would come down enough in the next few days, and that Tier Three would be imposed ‘by the end of next week or the start of the following week’.

Political leaders in the North East are scheduled to meet on Thursday afternoon to discuss whether the region should be placed in the highest category of measures. The move would affect the Tier 2 boroughs of Northumberland, Newcastle, Sunderland, North and South Tyneside, Gateshead and County Durham. Leaders there have previously pushed back against a Tier Three upgrade, claiming coronavirus cases had stabilised and the NHS locally could cope. 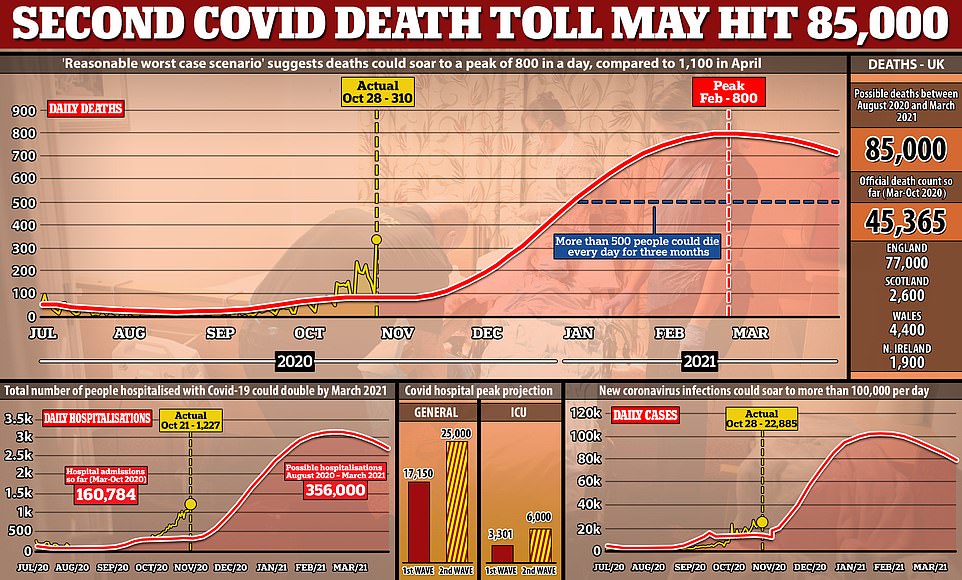 Bradford Labour councillor Susan Hinchcliffe and other leaders in West Yorkshire have refused to accept the harshest bracket of lockdown until they are given assurances about what support would be offered to businesses.

But she said the ‘unflinching’ Government had told council leaders it would be a ‘template package’ with no room for negotiation.

Ms Hinchcliffe, who is also the chairwoman of the West Yorkshire Combined Authority, told the BBC Radio 4 Today programme this morning she would not describe it as a ‘stand-off’.

Ministers confirm ALL of Nottinghamshire will enter Tier 3 from Friday with shops banned from selling alcohol after 9pm, beauty salons ordered to shut and shisha banned

Ministers last night confirmed all of Nottinghamshire will enter Tier Three from Friday, with off-licences banned from selling alcohol after 9pm, beauty salons ordered to shut and shisha banned.

Number 10 said Nottinghamshire will be dragged into the toughest bracket to fight its growing outbreak, which has forced hospitals to start cancelling cancer operations to make space of Covid-19 patients. Around 1.2million people living in the county will fall under the harshest lockdown, after four of eight local authorities initially escaped the most stringent restrictions.

Local officials have agreed to adopt a series of other tougher measures on top of the standard Tier Three measures, including shutting down cafes, restaurants and social clubs that don’t serve ‘substantial’ meals. Betting shops, car boot sales and auction houses must also close.

Across the entire county, alcohol sales will be banned after 9pm if booze is bought to consume off premises. Alcohol can, however, still be purchased in pubs and bars alongside a substantial meal up until 10pm. Tattoo parlours, tanning and nail salons, piercing services and saunas must close — but all hairdressers, barber salons, cinemas, theatres, ice skating rinks can remain open, under the improvised rules.

Health and Social Care Secretary Matt Hancock said: ‘We have seen infection rates rising sharply across Nottinghamshire, and in close collaboration with local leaders we have agreed on a package of local measures to stop this virus in its tracks.

‘I understand how difficult life is under these restrictions and the impact they have on families and businesses, but we never take these decisions lightly.’

She added it was unclear what support would be offered to businesses in the event of a move to the higher tier but the Government had told council leaders it would be a ‘template package’ with no room for negotiation.

She said: ‘It is clear from our conversations so far that Government are unflinching in their resolve to put Bradford and West Yorkshire into Tier 3. Our local residents and our local businesses need certainty about whether we are going into Tier Three or not.’

Labour MP for Batley and Spen, Tracy Brabin said on Twitter: ‘There is a lack of transparency from the Government about how we enter/exit Tier 3, and it is unfair on every person living in West Yorkshire to be left in the dark on this. I have been pushing the Government to show us that they are following the science.’

The political debate is taking place against a backdrop of dramatically rising hospital admissions for Covid-19 with NHS figures showing the Yorkshire and Humber region with the fastest growing rates in the England.

Earlier this week, the trust which runs Leeds General Infirmary and St James’s Hospital said only essential operations will go ahead after the number of Covid-19 patients being treated went beyond the number treated at the peak of the virus’s first wave. Other hospitals, including Bradford Royal Infirmary, have reported similarly high figures.

The latest official statement on the talks from the West Yorkshire Combined Authority, issued on Wednesday evening, said: ‘The latest data on infections and hospital admissions shows a continued rise, and we have repeated our calls to Government that further local action needs to be taken, including strengthening community engagement and test and trace.

‘There will be further discussions with Government in the coming days. We are absolutely committed to implementing the most effective measures to protect the people and economy of West Yorkshire.’

Meanwhile, political leaders in the North East said they will ‘resist any attempt’ by the Government to force a Tier Three lockdown on the region.

Council chiefs and business figures say infection rates are levelling off under the current Tier Two rules. In a statement on Monday, the local authority leaders said: ‘We are also continuing to lobby for additional support for all those businesses doing their utmost to operate in a Covid-secure manner in these difficult times without the need to move to tier three.

‘We will carry on making the case for a more localised approach to test and trace, allowing us to capitalise on local expertise and knowledge of our communities, and work closely with the police to call for greater resource and support to enforce the guidance.

‘We do not want to see harsher restrictions imposed on our residents by tier three and will resist any attempt by government to do so. This would have an even greater impact on our economy and our wellbeing.’

Mayor Andy Street and council leaders – including Birmingham’s Councillor Ian Ward – are involved in behind closed doors talks to make sure a full package of support measures and financial backing is in place for affected businesses before the measures come into force.

Mr Ward told Birmingham Live today: ‘Case rate numbers are going up, and we have to do something more. We will be moving into Tier 3.’

The city’s case rate is now above 250 cases per 100,000 people and there are now more than 300 patients with coronavirus in hospital beds at University Hospitals Birmingham, including 34 in ICU.