WhatsApp is letting its users connect to the app using ‘proxy servers’ – intermediary gateways between users and web servers that let them go online.

From today, WhatsApp users globally can head to the app’s settings to enter the name of a proxy server and use it to access the internet.

Proxy servers work as alternative gateways between a user and the internet when traditional connection methods and servers have been shut down or cut off.

Allowing WhatsApp users to connect to proxy servers will help users connect in case of internet shutdowns, as recently seen in Iran. 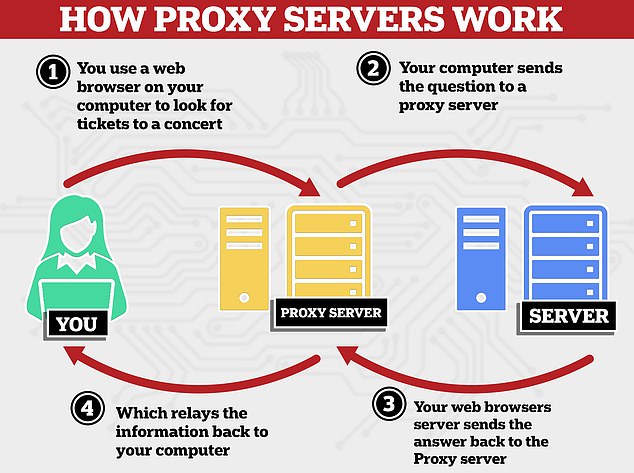 What are proxy servers?

A proxy server is ‘an online middleman’ that acts as a gateway between you and the internet.

It’s an intermediary server separating end users from the websites they browse, and can take the form of hardware or software.

Proxy servers function as a bridge on the internet when you don’t want to (or are unable to) connect to websites directly.

Proxy servers are often set up by volunteers and organizations dedicated to helping people communicate freely.

WhatsApp, which is owned by Mark Zuckerberg’s company Meta, said in a blog post that many people are denied the ability to reach their loved ones because of these shutdowns.

‘Our wish for 2023 is that these internet shutdowns never occur,’ WhatsApp said in the post.

‘Disruptions like we’ve seen in Iran for months on end deny people’s human rights and cut people off from receiving urgent help.

‘Though in case these shutdowns continue, we hope this solution helps people wherever there is a need for secure and reliable communication.’

Users need to head to Settings and tap ‘Storage and data’ followed by ‘Proxy settings’ to toggle the option on and enter a proxy server address.

Once confirmed, it will provide the necessary connection between the user and the website or service that they wish to access.

WhatsApp said many proxy servers are set up by volunteers and organisations around the world to let people communicate freely.

Nevertheless it’s created a webpage to guide everyday users to set up a proxy server and ‘help others connect’. 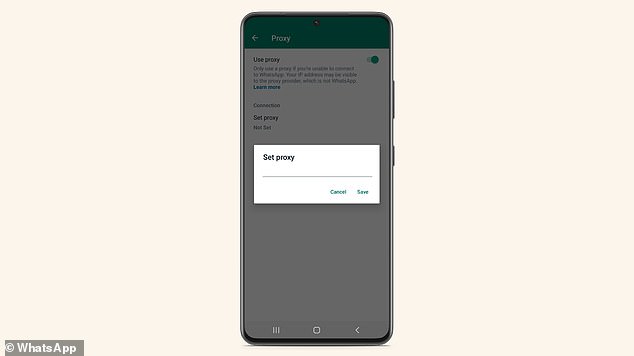 Connect to a proxy server on WhatsApp

– Tap on ‘Storage and data’ followed by ‘Proxy settings’

– Toggle the option on, enter the address of a proxy server and tap save

Even with proxy servers, messages on WhatsApp will be still be protected by a security standard that it uses called end-to-end encryption.

End-to-end encryption ensures only the two participants of a chat can read messages, and no one in between – not even the company that owns the service.

WhatsApp, which was bought by Zuckerberg’s firm in 2014 for about $19 billion, says every private message sent using WhatsApp is secured with end-to-end encryption by default.

Despite this, end-to-end encryption has not been a standard on other Meta platforms.

Facebook, for example, only began testing end-to-end encryption as default on the Messenger app last year.

‘Your personal messages will still be protected by end-to-end encryption – ensuring they stay between you and the person you’re communicating with and are not visible to anyone in between, not the proxy servers, WhatsApp or Meta.’

WhatsApp regularly introduces new features and tools to the app to tweak the user experience. 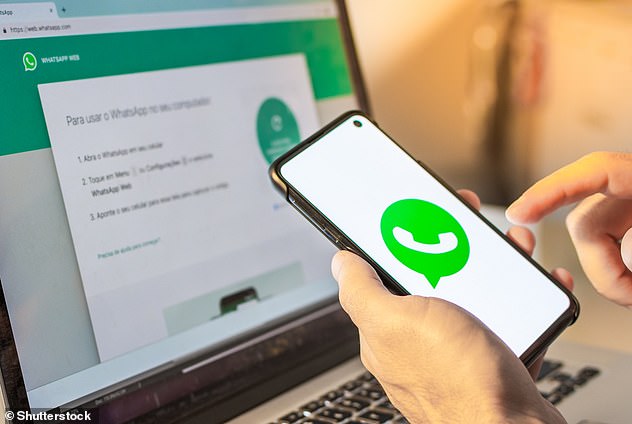 Last month, it started letting users to preview their voice messages before sending them, helping avoid awkward mistakes or re-recording notes all over again.

It also started letting users create personalised avatars on the platform, which has more than 2 billion users globally.

These avatars mean users can create a digital version of themselves from billions of combinations of ‘diverse hair styles, facial features and outfits’.

The avatars can be used as a profile picture or sent in the form of one of 36 custom stickers that reflect different emotions and actions.

Meta will STILL devote 20% of its costs to the metaverse

WhatsApp launches avatars with billions of hair styles and outfits

WhatsApp rolls out Communities feature to bundle together group chats

A WhatsApp feature that enables users to bundle several group chats together under the umbrella of a single topic and share updates across them all has gone live in the UK.

The Communities feature letsusers organise different group chats together under a single main topic, for example, their children’s school or the street they live on.

Community admins are then able to share messages with people across all groups.

The feature is being rolled out as part of an update that will also allow users to create and take part in polls with their chats. 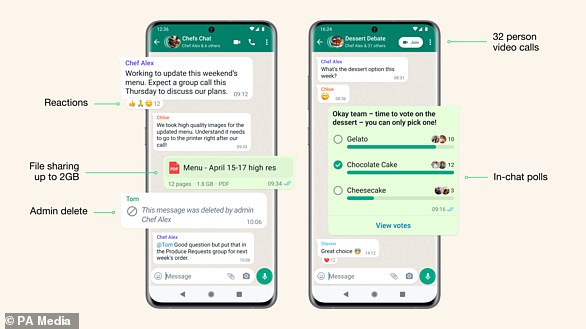 Among the new features introduced was the ability to create polls within a chat. (Meta)

In addition, group video calling will now support up to 32 participants.

‘With Communities, we’re aiming to raise the bar for how organisations communicate with a level of privacy and security not found anywhere else,’ WhatsApp said in a blog post announcing the rollout.

‘The alternatives available today require trusting apps or software companies with a copy of their messages – and we think they deserve the higher level of security provided by end-to-end encryption.

‘Once you’re in a community, you can easily switch between available groups to get the information you need, when you need it, and admins can send important updates to everyone in the Community.’

‘We’re also rolling out polls and 32-person video calling too, all secured by end-to-end encryption so your messages stay private,’ he added.