Nearly half of Britons believe overindulgent and frivolous spending habits of young adults to be a major factor hindering their homeownership aspirations.

Research by academics at King’s College London found that 48 per cent say key reasons why young people can’t afford to buy a home is because they spend too much on takeaway coffees, mobile phones, Netflix subscriptions and holidays abroad.

Only three in 10 were found to disagree with this view and even the majority of young people were found to agree that such spending is a key reason for homeownership failures.

Generational divide: The study found that other then Gen Z, British adults are three times as likely to say that younger workers are less, rather than more, motivated and hardworking than older workers

However, despite young people’s perceived extravagance when it comes to spending there is also firm recognition that economic factors are also acting as a major barrier to homeownership.

In fact, three quarters of Britons also agree that factors such as rising house prices, stricter lending rules and low wage growth are partly to blame.

While around seven in 10 or more of all generations think such factors are key reasons that young people can’t get on the housing ladder, Millennials and Gen Z are more likely than Baby Boomers and Gen X to strongly feel this way.

There is also a clear sense among the public that today’s youth face more financial struggles than their parents’ generation.

Three quarters of UK adults, think buying a home is harder for young adults now, with only 11 per cent believing it is easier than it was in the past.

At the same time, 68 per cent believe it is harder for young adults to save for the future. 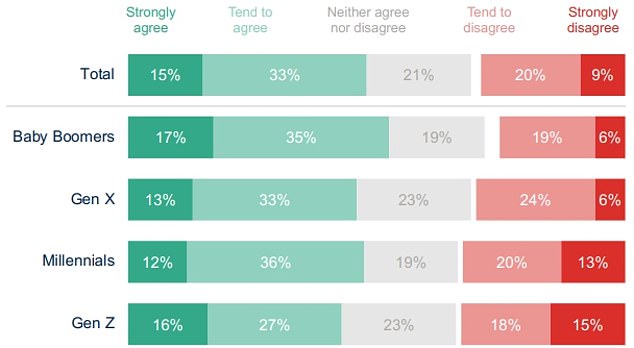 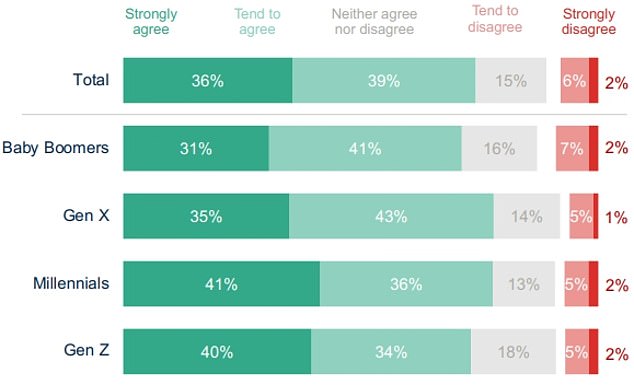 At the same time, there is a high level of recognition among the public that economic factors are also preventing young people from buying a home

What is the reality of the situation?

Whether or not some young people may be guilty of living it up, there is no denying that the rising cost of living, a house price boom, and low savings rates have combined to make life extremely tough for aspiring homeowners at present.

House prices have risen by about 20 per cent since the pandemic alone, while average wages have grown by about 10 per cent in that time, according to ONS data.

What is the main reason stopping young people from getting on the property ladder?

The cost of living crisis is also squeezing finances from all directions, from household bills through to food and fuel.

Households’ weekly savings are expected to fall by an average of 128 per cent this year as Britons take-home pay fails to keep pace with rising inflation, according to data from Scottish Friendly and the Centre for Economics and Business Research.

When looking further back, the current outlook for first time buyers appears even worse, with wages failing to keep up with property prices over the long run.

Average house prices have risen by 68 per cent over the past 10 years, according to ONS data, whereas average wages have only grown by 31 per cent during that time.

According to Nationwide, the average first time buyer attempting to get on the property ladder with a 10 per cent deposit requires £22,159 today compared to  £13,765, 10 years ago.

What about Boris’ mortgage market review?

Stricter lending rules were also cited as one of the factors preventing homeownership among young people.

During his speech in Blackpool last week, Boris Johnson confirmed there would be a review of the mortgage market to ensure a better supply of low-deposit mortgages.

Johnson said: ‘The challenge facing first time buyers today is bigger than anything we’ve seen before. For far too many the finance required to buy a home simply isn’t available.

‘We have a ludicrous situation where many aspiring first-time buyers who could afford to make monthly mortgage payments cannot afford to buy because ever spiraling house prices mean that the deposits required to get a mortgage are overly inflated.

‘The global rise in the cost of living is only making life harder for savers. So we want it to be easier to get a mortgage.’ 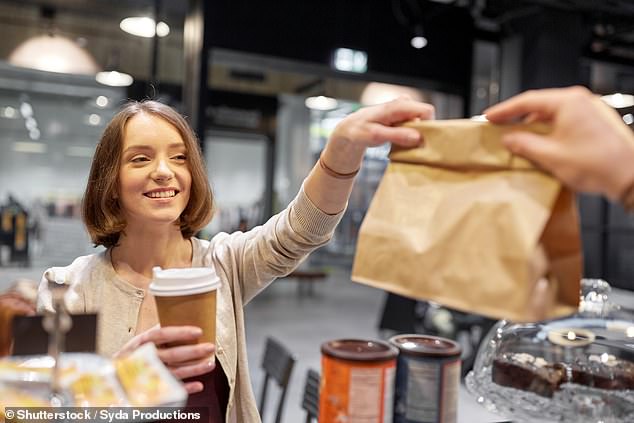 Too much of the good life? Half of Britons appear to blame the spending habits of younger generation as  a key reason inhibiting their housing aspirations.

Industry experts appeared unsure over what exactly the prime minister is intending, given there are already a host of lenders offering mortgages covering up to 95 per cent of a property’s value.

Lewis Shaw, founder of Mansfield-based Shaw Financial Services, said: ‘If we’re to believe they want higher loan-to-value mortgages, there’s only one place to go, and that is 100 per cent loan-to-value.

‘However, we already have 100 per cent loan-to-value as a couple of lenders allow you to take a personal loan as a deposit.’ 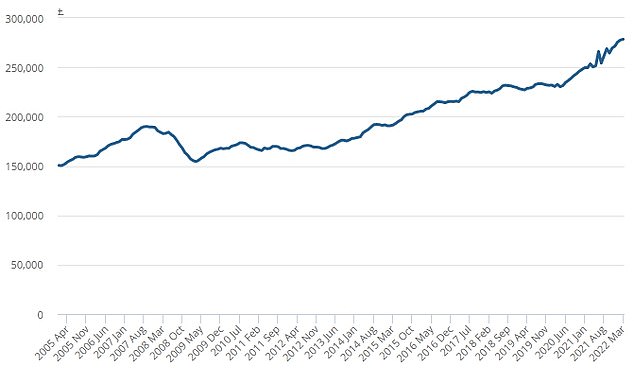 Property boom: House prices have risen by roughly 20 per cent over the past two years.

Karen Noye, mortgage expert at Quilter added: ‘The details of what this actually means is yet to be seen.

‘By his own admission, there are a healthy supply of high loan to value mortgages available so what this review will uncover is anyone’s guess.’

Furthermore, whilst a greater choice of low deposit mortgages may help those struggling to save enough for a deposit, they won’t make any difference for someone who is unable to afford the mortgage amount required.

Under current guidelines established by the Financial Policy Committee in 2014, lenders impose a loan-to-income limit on borrowers, meaning they can usually borrow 4.5 times their salary – although in some cases it can be higher than this.

That may be enough in some areas of the country, but in many places, that won’t be sufficient.

For example, in London, where the average property was valued at £712,000 last year, according to Rightmove. 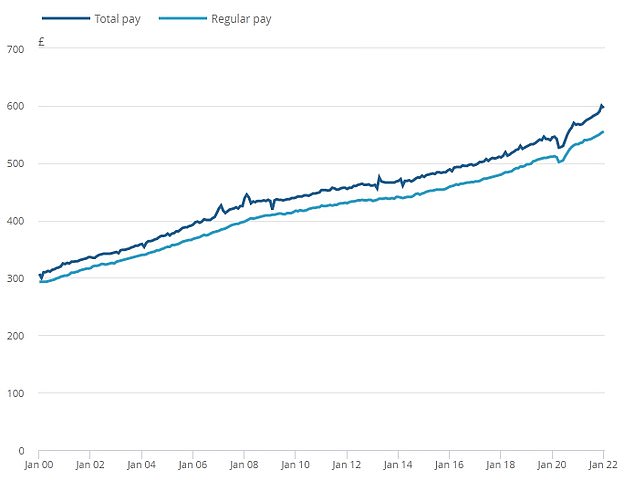 Slow wage growth. Although wages have risen more sharply since the pandemic, overall pay has risen by only 31 per cent on average over the past 10 years, according to the ONS.

It is also important to not underestimate the significance that the higher cost of living is having on aspiring homeowners.

Household credit card borrowing rose to its highest level in more than 16 years in April, suggesting more Britons are turning to debt to cope under the current circumstances.

This could also impact a person’s homeownership plans as lenders take into account a person’s debt as a proportion of how much they are earning.

Someone earning £2,500 a month, but with recurring monthly expenditure servicing debts of £1,000 each month, for example, would have a debt-to-income ratio of 40 per cent.

In most cases, lenders will typically allow someone’s debt to be no more than 40 per cent as a proportion of their income, according to the mortgage broker, Habito.

Martijn van der Heijden, chief financial officer at Habito said: ‘Deposits are of course a large part of the issue when it comes to buying a home, but it isn’t the only part.

‘Many younger buyers assume that if they are able to save 5-10 per cent of a property’s asking price as a deposit, they’ll be able to buy a home, but mortgage affordability is more complicated than that.

‘With average full-time British salaries now £32,000, and the average national house price being £278,000, we’re in a situation where the house price to income ratio is now 8.7 – falling way short of typical mortgage lending of 4-4.5x income.

‘You need the salary, a suitable income-to-debt ratio, as well as a healthy deposit – to be approved for a mortgage.

‘There’s a risk that without building much more affordable housing, boosting demand by tinkering with mortgage affordability through Government-backed policies will have the same effect again.’