EXPRESS INFORMER > Health & Medicine > What’s behind the US baby bust?

The famous American work ethic helped the United States become the economic superpower of the 19th and 20th centuries.

But experts warn the decision to prioritize careers over families has set the country on an irreversible path to economic destruction. The reason? People do not have enough children anymore.

A baby boom in the mid-20th century saw the average woman give birth to between three and four children. Today, just 1.6 children – the lowest level recorded since data was first tracked in 1800.

This could lead to economic devastation in America down the line – as the federal government would need to collect more taxes to fund programs such as Medicare and Social Security – while dishing out less benefits to each person.

The downward trend of American fertility has accelerated in recent decades, as the ‘Instagram generation’ of millennials and zoomers prioritize their careers, travel and relaxation over building families.

Fertility in the US has plummeted in recent decades (top). The average American woman is now only having 1.6 children throughout her life, well below replacement level of 2.1. It is a 15 percent drop from the rate of 1.9 in 2010. North Dakota, South Dakota and Alaska are America’s most fertile states, with more than 65 annual births per 1,000 fertile aged women (center left). Fertility rates dropped the most since 2005 in Utah, Arizona, Colorado, Nevada and California (center right). Dr Melissa Kearney (pictured), an economic professor at the University of Maryland, agrees with Census projections that the decline may start in 2035. Dr Phillip Levine (bottom right), an economist at Wellesley College, fears the population imbalance will crash Social Security and Medicare

Dr Melissa Kearney, an economic professor at the University of Maryland, told DailyMail.com: ‘There has been a greater emphasis on spending time building careers. Adults are changing their attitudes towards having kids.

‘They are choosing to spend money and time in different ways…  [that] are coming into conflict with parenting.’

She continued that younger people are also showing more interest in leisure activities and travel now than they did before, on top of career building.

‘[Wanting to travel] just comes into conflict with parenting,’ she said.

According to the US Census Bureau, the fertility rate – which measures how many children an average woman will give birth to during her life – was 1.6 in 2020.

This falls far below the level of 2.1 needed to maintain current population levels.

Many have pointed to high costs of child care, student debt held by Americans in their early 20s and other financial pressures.

A report by the First Five Year Fund found that the costs of raising a child have increased 220 percent over the last three decades – with it costing around $10,000 per year to raise a child under the age of six.

Americans also now owe over $3trillion in collective student debt, a figure that has doubled over the past 20 years.

Large portions of this debt are held by people in their 20s and 30s – who are of the age to start having kids.

Census data projects that the US population will start falling by 2035 – unprecedented in the nation’s 250-year history.

Dr Kearney warns that, gradually, the government would need to collect more taxes to keep these programs afloat – while providing less benefits to each individual recipient.

Dr Phillip Levine, an economist at Wellesley College in Massachusetts, warned to DailyMail.com there will need to be economic reorganization to keep the country afloat adding ‘jobs will be lost’ in manufacturing, construction and other fields and move into care and other services for the elderly.

This will ‘eventually have a damaging impact both on social cohesion and general wellbeing, and on economic dynamism’, he warned.

Dr Christopher Murray, a global health expert from the University of Washington, told DailyMail.com: ‘Since most purchases of real estate or consumer durables are in the working age adults, it will tend to put downward pressure on these types of assets.

‘In the long run, societies have to adapt to having more grandparents than grandchildren.

‘We are actually only just beginning to understand the myriad [of] challenges that sustained low fertility will have on societies.’

Fertility in the US has long been falling. A half-century ago in 1970, the average woman was having 2.39 children over her entire life-span.

A half-century ago in 1970, seniors made up around 10 percent of the US population.

This puts an excess burden on social programs like Medicare and Social Security, as this portion of the population pulls away its resources but does not pay into them.

In research published last week, Dr Kearney and Dr Levine investigated potential causes of this decline in fertility. They found that financial issues play less of a role than

But, the researchers do not find these financial pressures to be a significant part of the problem.

They cite Scandinavian countries such as Sweden (fertility rate of 1.6) and Norway (1.5), which have strong welfare states but also suffer from a declining birth rate, as examples why the problem lies deeper than economics.

Their research found little correlation across the world, and in the US, between available childcare subsidies from the government and changes in fertility.

Income has not proven to be a factor either – with the decline noticeable in women across socioeconomic and educational brackets. 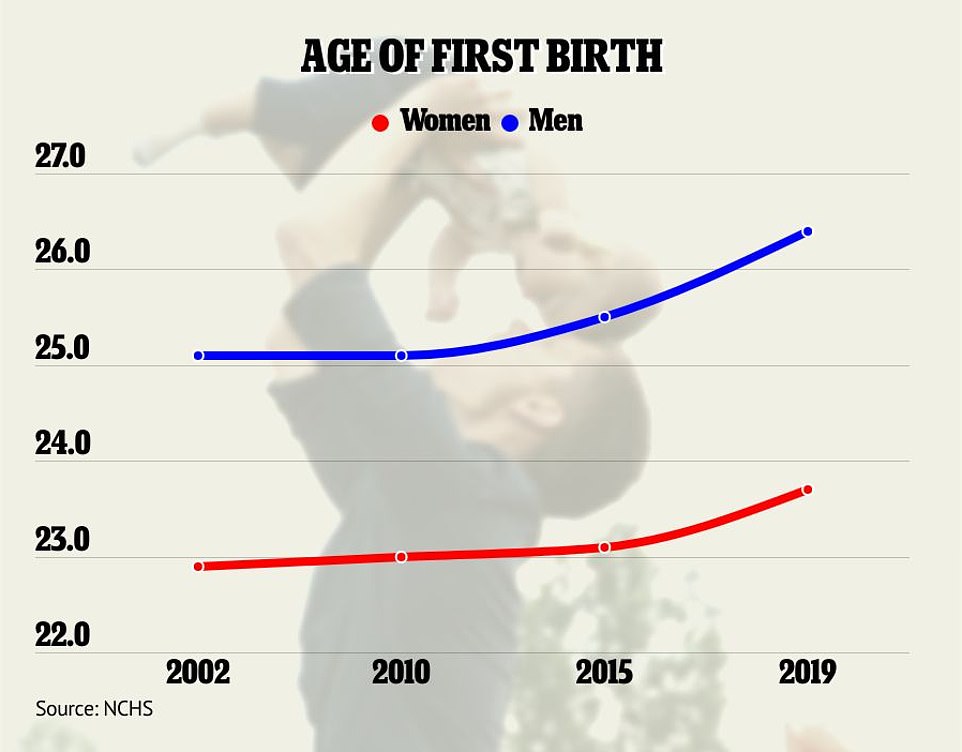 Men are now having their first child at 26.4 years old on average, while women are giving birth for the first time at 23.7. Both have increased greatly in the last two decades 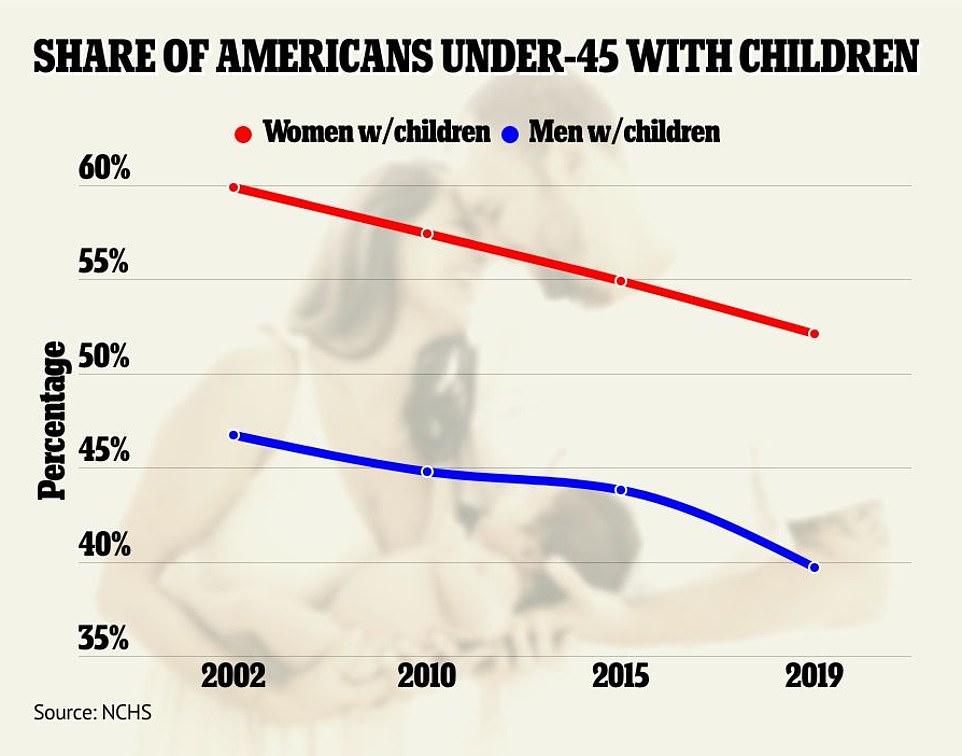 The number of American women with at least one child has fallen to just 52.1 percent, while the number of men dropped to 39.7 percent in 2019

US life expectancy crashes to lowest level since 1996

US life expectancy has crashed to its lowest level since 1996, official data has revealed.

A report from the US Centers for Disease Control and Prevention (CDC) estimates that the average American born in 2021 will live to just 76.4 years.

Covid was the third-leading cause of death for the second year in a row in 2021, and a five-fold increase in drug overdose deaths over the past decade – fueled by a ferocious rise in fentanyl contamination – has also contributed to the decline.

Life expectancy in the US reached its highest point – 78.9 years – in 2014. Before the pandemic, in 2019, life expectancy was nearing that level again.

The Covid crisis caused the biggest yearly drop in life expectancy in 2020 since World War II.

Heart disease was still the top causes of US deaths, followed by cancer.

Women in lower income brackets are actually more likely to have children than their wealthier peers, with experts pointing to them having less access to family planning and sexual education.

Instead, researchers believe it is a result of Americans, and women in particular, changing priorities in recent decades.

Some have pointed to the 2008 Great Recession as an inflection point in America’s declining fertility rates.

The massive economic downturn cost millions of Americans their jobs, and a spate of foreclosures around the country led to many families losing much of their wealth.

Dr Levine admits the recession played some role, saying ‘clearly the recession had and impact’ but says that 15 years later the effects would have mostly been diminished.

‘Every time a recession happens fertility rates go down… it’s not a surprise,’ he continued.

Instead, he says America ‘is catching up with the rest of the world’, as many developed nations in Europe and east Asia – like Japan and South Korea – have already experienced sharp drops in fertility.

Dr Levine said that people in a more developed nation start to see children less as a means to perform labor – like in agrarian societies where every hand of help matters – but more-so as an investment.

This means that instead of having multiple children to boost the families productivity, families will opt to have fewer offspring and instead invest as many resources as possible into their individual success throughout life.

But he said that ‘it is not clear why that happens’ repeatedly across the world.

The intangible nature of what is causing birth rate to decline means that tangible solutions to the issue may be hard to come by, the pair of economists warn.

‘If it is really just shifting priorities, then it’s a lot harder to thinking we could implement policies to stop the decline of child-bearing,’ Dr Kearney said.

She believes policies like a child tax credit, childcare subsidies and guaranteed maternity and paternity care could have ‘modest’ effects on fertility decline because they relieve some financial pressures.

These will not solve the problems, though, as the attitude on parenting that exists in much of the developed world would still remain.

‘Even in countries with expansive welfare states we see low fertility rates,’ she explained.

America, and many other western nations, face long-term harm unless they can come up with a solution.

‘Declining birth rates will put America in a position where there are ‘more older people and fewer workers,’ Dr Kearney explains.

This will stress on public programs like social security and Medicare, where a younger workforce funds care for the elderly.

A smaller workforce will also lead to overall economic contraction and a ‘less dynamic, less productive economy,’ she says.

Dr Kearney warns that over time, the general quality of life of the average American could degrade.

Immigration can help the country maintain a stable workforce in the short-term.

Dr Levine says that the entire economy may need to reshape itself around changing demographics.

Government leaders will have to invest more into human capital – making education and job training more accessible to make sure each individual worker is more productive.

Industries that cater to older people, like elderly care, should expect to grow – while toy and game companies could expect to shrink.