More than 1.4 million people face a mortgage shock as they will need to remortgage this year as fixed deals locked in at low rates come to an end

Almost six in ten deals (57 per cent) coming up for renewal in 2023 are at rates below 2 per cent, according to ONS statistics.

With average two-year fixed rates now at 5.75 per cent and five-year fixes at 5.57 per cent, many borrowers could face monthly bills of hundreds of pounds more.

Homeowners who know their mortgage deal is up for renewal this year have been urged to plan ahead, we explain what they can do.

What has happened to mortgage rates?

Last year was a turbulent one for mortgages, no more so than in the aftermath of then-Prime minister Liz Truss’ mini-Budget in September.

On 1 August 2022, the average two-year fixed mortgage rate across all deposit sizes was 2.52 per cent, according to data from Moneyfacts.

However, average fixed rates for both two- and five-year mortgages have steadily fallen despite a string of base rate rises from the Bank of England in a bid to tackle the high level of inflation. Average fixed rate mortgages are now at 5.75 per cent and 5.57 per cent over two and five years, respectively.

How much will this cost people

A wave of mortgages fixed for two years during the pandemic property boom are coming up for renewal this year, along with other two-year deals that people remortgaged to at low rates in 2021.

Meanwhile, those who thought longer term in 2018 are also looking at needing to remortgage five-year fixes that are coming to an end.

For a borrower remortgaging this month from an average two-year fixed deal on a £200,000 mortgage over 25 years the average monthly increase would be £359. You can check costs with our true cost mortgage calculator.

The best mortgage deals are considerably below average rates quoted and many of those with larger deposits will have fixed at rates well below 2 per cent.

Fixed rate deals coming to an end in 2024 are likely to cause less of a financial shock because borrowers on two-year deals fixed in 2022 when rates were higher.

It is not just mortgage holders who are set to suffer this year. ONS data shows 26 per cent of all renters said their rent has gone up in the past 6 months and on average 24 per cent of their weekly expenditure goes on rent.

By contrast, just 16 per cent of mortgage holders’ expenditure goes on their repayments. 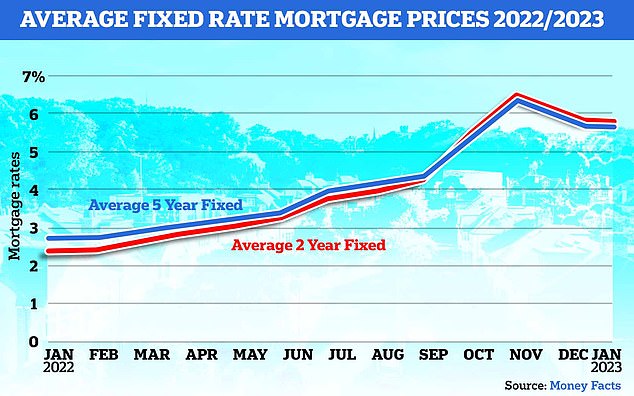 Slowly falling: Mortgages rates are slowly falling following the highs seen in October after the mini-Budget, but remain much higher than they were at the beginning of 2022

How badly will this affect homeowners?

The mortgage shock comes on top of energy bills running at more than double their level a year ago and other essentials such as food having seen large price rises as inflation soared.

Last year more than a quarter of mortgage holders say they wouldn’t be able to afford their monthly repayments if they increased by £100 a month, according to research from Citizens Advice.

‘People on expiring fixed rate mortgages and those on variable rates will already be feeling the pressure. Meanwhile private renters are increasingly exposed to having costs passed onto them through rent increases.

‘We know people find it hard to ask lenders for help when they’re struggling with repayments. This is why banks must take the first step and ask customers if they need support when they reach the end of a fixed term mortgage.’

There is good news, lenders are still reducing their prices. Last week Nationwide announced reductions of up to 0.6 per cent to its mortgage range, taking some of its loan rates below 4.5 per cent.

You can keep abreast of the latest moves in the mortgage market and analysis on whether rates will rise or fall in our What next for mortgage rates? guide.

For tenants the outlook is less hopeful with experts warning rents will continue to rise as mortgage rate hikes on buy-to-let properties are passed on.

The average UK rent was £1,174 a month in December 2022, down 0.1 per cent, or £1, from the month before, according to the latest Rental Index from landlord insurance broker HomeLet.

What to do if you need to remortgage

Borrowers should compare rates and speak to a mortgage broker and be prepared to act to secure a rate. Most lenders allow people to secure a deal up to six months in advance.

If rates then continue to fall, they may be able to look for a different deal without facing any costs for not following through with their original plan. Borrowers should always check if this is the case with their broker, as circumstances may vary.

Anyone with a fixed rate deal ending within the next six to 12 months, should look into how much it would cost them to remortgage and start planning ahead with their finances for costs to rise.