When selling a property it’s natural to strain every sinew to showcase your home in the best light.

But what happens if your neighbours aren’t playing ball? All the spring cleaning and freshly brewed coffee in the world won’t make much of an impact if the house next door is in a shocking state.

After all, would you want to live cheek by jowl with someone whose rubbish-strewn front garden looks like an overgrown jungle?

Making a good impression: What happens if your neighbours aren’t playing ball?

But can you do anything to improve the ­situation? Especially if you’re one of the 49­­per cent of those who, despite living in close ­proximity to the same people for years, don’t know their neighbours’ names?

The issue, says Micaela Dempsey, head of dispute resolution at law firm Brown Turner Ross, is that homeowners don’t have a ‘­specific­­ duty’ to maintain their properties to a specific ­­standard.

‘The key question is ­reasonableness, which is subjective,’ she ­­says.

It’s only when the state of affairs leads to what’s known in law as a ‘private ­nuisance’ that you may have grounds to call in the ‘suits’.

For example, rodents loitering unchecked around the neighbours’ overflowing bins before adjourning to your front path.

Though once lawyers get involved, there is the risk of turning a respectful request into a nuclear dispute.

Getting legal should always be a last resort. It will forever ruin a relationship with your neighbour, will be very expensive and might affect your property value

He suggests dropping a letter in or just knocking on their door and asking for a quick word.

‘Getting legal should always be a last resort,’ he says. ‘After all, it will forever ruin a relationship with your neighbour, will be very expensive and might affect your property value — formal disputes must be declared when you sell.’

So how to open the conversation when all you can smell is rotting fish over the fence and you’ve got a prospective buyer coming round at the weekend? Make your approach is kind, considered and helpful.

‘If, for example, your neighbours are struggling with ­taking bins out or maintaining their property, you could even offer to assist them with these things rather than take a legal route,’ says Joanne Ellis, head of the consumer land team at Stephensons Solicitors.

‘Even if you have to pay for some paint or a gardener, for example, this is likely to be far cheaper and quicker than going down a legal route.’ 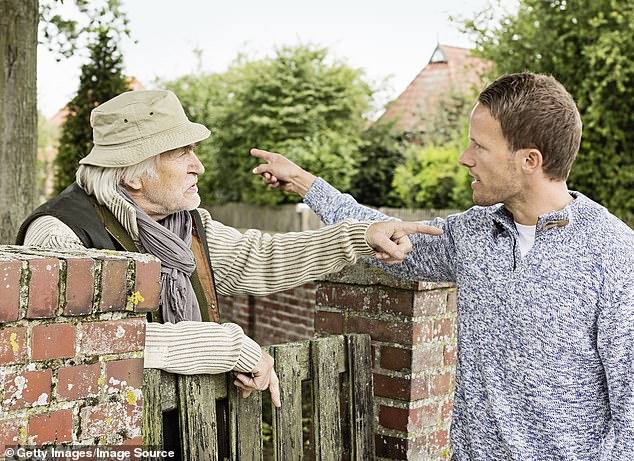 Tension: A confrontation over the garden fence is not the best way to resolve any issues

In fact, some local authorities offer a free mediation service — though both ­parties need to be willing to engage in the process.

It may pave the way to a gentleman’s agreement, about, say, not ignoring overflowing bins or putting them out at a certain time.

If all this doesn’t work then there may be little choice but recourse to the law. ­However, making a ‘nuisance case’ would depend on the issues posed by your ­neighbours’ home as the damage or ­interference must be substantial or ­unreasonable. An unsightly, unkempt ­garden won’t meet the criteria.

The underlying principle is reasonableness, and the court won’t be in a hurry to agitate your neighbour to get their lawn (and house) in order.

‘Alternatively, many properties are ­subject to covenants and a check of the title deeds could show if there is anything that the neighbour is breaching,’ says Joanne Ellis. ‘This is likely to be easier to establish than a private nuisance.

‘Some deeds contain specific clauses that garden areas should be kept in good ­condition, and some have specific ­provisions about how the exterior of a property should be painted, for example.’

There are also provisions under the Environmental Protection Act 1990 which mean your local authority can serve and enforce what’s known as a statutory ­nuisance abatement notice.

Again, it’s not so straightforward: a ­statutory nuisance can be caused by ‘any accumulation or deposit’ or relate to a resulting health problem — with experts needed to make the case.

‘If the garden is in enough of a state as to meet the criteria, action should be taken by the local authority,’ says Joanne. ‘This would mean the work and associated costs would not lie with you. The route is usually faster than civil proceedings through the court.’

One thing you should avoid at all costs, despite temptation, is to take on the problem yourself.

Even if taking out the bins, clearing rubbish or lashing on some magnolia paint on the fence is meant in good faith.

Pranav Bhanot, a litigation solicitor at London Law Firm, Meaby & Co, says: ‘It is important to stress that an individual should not step on to the land of a ­neighbouring property to take action themselves to rectify an unmaintained land as this could result in a claim for trespass being brought.’