An energy price guarantee plan to freeze the average British household’s gas and electricity bill at £2,500 for the next two years has been revealed by new Prime Minister Liz Truss.

The bid to support Britons faced with spiralling gas and electricity bills, will stall the planned 1 October energy price cap rise to £3,549 for the average household and cap it at £2,500, with all households then getting a £400 rebate.

Details on unit prices per kilowatt hour have not been released yet and the new cap on an average household’s bill is based on the current Ofgem price cap, which stands at £1,971, plus the £400 energy rebate that every household is due to receive this winter, and then a round-up to £2,500.

The average household will pay slightly more than they do now under the new limit and rebate, but the freeze is around £1,000 lower than Ofgem’s October energy price cap, which was due to send bills up 80 per cent.

The price cap and the new energy bills guarantee figure has been quoted for an average household, but people’s bills vary and so will their individual limit. We reveal below how much you could end up paying.

Liz Truss said ‘this is the moment to be bold’ in announcing the energy bill freeze at £2,500

What is the energy price guarantee to freeze bills?

Liz Truss announced in the House of Commons that she intends to freeze energy bills at £2,500 for the average household for two years.

This is based on the current £1,971 energy price cap level, plus the £400 rebate already due to all households through their energy bills over the winter, and a further £129 round-up to £2,500.

If energy prices remain at forecast levels rather than falling back over the period, plan is expected to cost around £130bn over the next two years.

Ms Truss said: ‘Earlier this week I promised I would deal with the soaring energy prices faced by families and businesses across the UK – and today I am delivering on this promise.

‘This government is moving immediately to introduce an Energy Price Guarantee.’

The PM added that this will ‘curb inflation and boost growth’, and said she is doing the important work to help people get through this winter and the next winter, while fixing the energy supply problems.

‘This is the moment to be bold. We are facing a global energy crisis and there are no cost free options.’

Opposition parties warned that plans to ease the cost-of-living crisis without taxing energy firms could leave Britain with more debt for decades.

What does this mean for my energy bills?

A confusing element of the price cap is that a monetary figure is quoted for an average household, but it actually relates to how much you could be charged for a unit of energy.

Obviously, this means some households could be left paying more than £2,500 for their annual bills if they use more than the average amount, while others may pay less.

Details on unit prices per kilowatt hour have not been released yet.

The size of your home, its energy efficiency and how much gas and electricity you use will affect what you personally pay.

Another thing to bear in mind if looking at monthly bills is that energy usage varies substantially by time of year, but suppliers usually try to spread payments equally for those on monthly direct debits.

The impact for different household gas and electricity levels of the energy price guarantee freeze is shown in the table below.

To work out roughly what you will pay annually from 1 October, multiply your current projected annual bill by 1.27 and then take off the £400 rebate.

The complicating factor at play in calculating bills is that the energy price guarantee involves a new freeze on the energy price cap at £2,500 – a jump from the current £1,971 – but you need to factor in the £400 all households will then get back.

So the energy price cap will actually rise by 27 per cent, but everyone then gets £400 back this year, rebated on energy bills between October and March.

It is not clear from Ms Truss’s announcement whether the £400 rebate will remain for a second year. Without this in place bills would rise from October 2023. 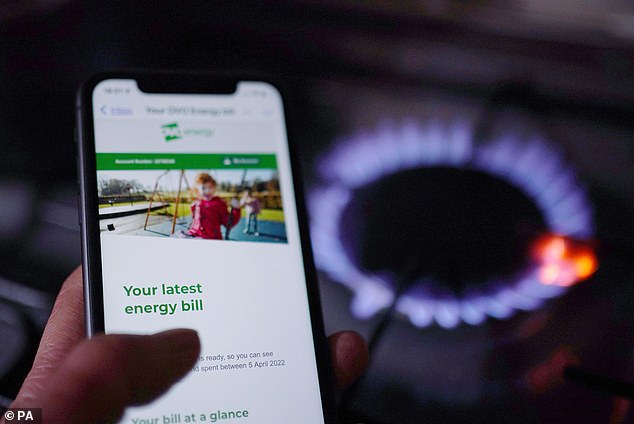 Energy bills are still due to rise by around 25 per cent from October as the new energy bill freeze jumps by £500  – a £1,000 difference from Ofgem’s original October price cap

All UK households are expecting to receive a government-funded grant of £400 to reduce energy bills from October.

This will be at a flat rate and paid to all households, so the impact in proportionally reducing bills will be felt the most for those whose energy bills are lower.

This rebate was initially going to be a £200 reduction paid back to the government in instalments over five years, but with rapidly rising gas prices, the discount has been doubled and no longer needs to be repaid.

The £400 rebate will be applied to UK energy bills over six months: with a reduction of £66 in October and November, and £67 each month from December to March.

There is no need to apply, as the discount will be made automatically by your energy suppliers in England, Scotland and Wales.

Separate arrangements are being made for households in Northern Ireland, which has its own energy market.

What support will businesses receive for their bills?

Red Flag, which monitors the financial health of firms, is warning that more than 75,000 larger firms that are high energy users are at risk of insolvency or are likely to lay off staff without government support.

The PM has announced that business energy costs will be capped for six months at the same price per unit – or kilowatt hour (kWh) – that households will pay under the government’s new plans.

The scheme will run for six months and will be reviewed in three months’ time to determine if the help provided should be more targeted towards certain industries.

Liz Truss also added this could be extended for vulnerable businesses such as the hospitality sector, and particularly UK pubs.

The new PM commented that the government will be launching their support plan for businesses struggling with their rising energy costs, which would be formalised over the next three months.

Businesses in the UK are currently not subject to the Ofgem price cap, which means their energy bills are at risk of significant fluctuations in the market and rising energy bills prices as a result.

Truss has announced a plan for a £40bn package to support businesses in Britain.

There are two possible options to implement this package: either through setting up a set unit price that businesses will pay for their energy, or through a unit price reduction that all energy suppliers must offer to businesses.

The government plans to reimburse suppliers for their losses and review the price of energy charged to businesses quarterly. This package will likely come into effect in October.

The energy bills guarantee gives certainty to millions of households coming into winter – but experts are still warning that households need to prepare for tough months ahead, as bills are roughly double what they were last year.

Kevin Brown, saving specialist at Scottish Friendly, said: ‘This announcement provides much needed clarity to the public and businesses which in the first instance should be welcomed.

‘Of course, prices are still much higher for energy now than they were just a year ago, so the pressure is still there on household budgets regardless.

‘That being said, one of the biggest problems of this entire situation has been the lack of certainty.

‘We’ve had continual reports of prices going up – so clarity that energy costs are fixed for the foreseeable future at least gives households breathing room to make a plan.’

Meanwhile, Heidi Chow, executive director at Debt Justice called for energy debts to be wiped out to help those from falling further into poverty.

She said: ‘Despite this intervention, energy bills will almost double for millions of households this year. Coming at a time of falling incomes and soaring inflation, energy bills are still unaffordable and will force more people into debt.

‘The government must write off energy debts that have already built up to give people in debt a fighting chance of surviving this winter.’

Gareth Kloet, energy spokesperson for Go.Compare Energy, added:  ‘While this announcement will offer some respite for people across the UK, these plans will still result in customers paying more and many people in the UK facing fuel poverty this winter.

‘We have to remember that millions of families are still facing energy bills of £2,500 which is an extortionate amount to pay for energy.

‘We believe that more can still be done and the Government has a duty of care to help relieve the pressure that homeowners and businesses are facing, and in particular those most vulnerable to the cost-of-living crisis.

‘We welcome the move by Liz Truss to slow the rate at which energy bills are increasing, but more needs to be done.

‘Whilst it’s great to see that the new prime minister has put the energy crisis firmly at the top of her agenda, it’s disappointing to see that bills will continue to rise sharply from the start of next month.

‘Today’s announcement should be seen as a reactive response to the market as opposed to a more strategic step forward. We now need to see a longer-term strategy implemented which will address the market as a whole.’

Meanwhile, conservative thinktank The Legatum Institute, suggested that over 1 million people are expected to be forced into poverty this winter due to rising costs, pushing UK deprivation levels to their highest for two decades.

It argued that the bill freeze was essential for protecting Britons from rising costs, but added that even if the energy price cap was held at £1,971, an additional 1.3 million people would slide below the poverty line.

The Energy Saving Trust has listed these ten tips, along with how much they could save a typical household could on energy and water costs per year. Read more on the energy saving tips here.