A 22-year-old high school drop out turned business woman has shared what it’s like flying first class from Sydney to Paris with Emirates.

Paris Marchant shared a video on TikTok documenting the international trip with her husband Lawrence Lees.

Unlike a business class ticket, first class offers nearly anything you may need – from five-star service to food on-demand and even a shower.

But the lush travel option with Emirates comes at a cost of an eye-watering $20,000.

Paris Marchant, 22, (pictured) and her her husband Lawrence Lees travelled from Sydney to France first class aboard Emirates 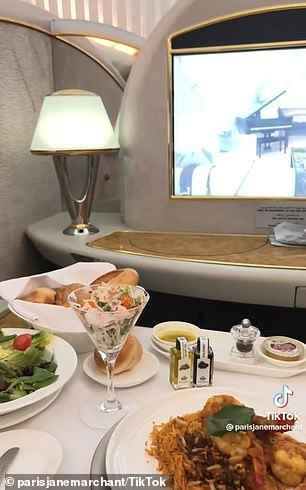 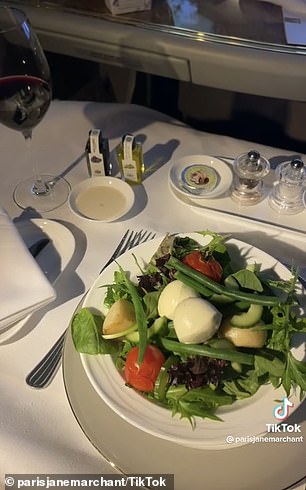 In a TikTok video Paris documented everything that’s included – from freshly served meals to the huge cabins and additional perks. But the lush travel option with Emirates comes at a cost of an eye-watering $20,000

Would you pay $20,000 to fly first class internationally with Emirates?

In the video Paris highly recommended traveling first class if you can afford it, as she boasted about enjoying the comfort, food, and products supplied.

For the first leg flight from Sydney to Dubai the couple were treated to a cabin each that was equipped with a huge television, mini bar, snacks, and doors on either side for privacy.

‘These were both of our first class suites – as you can see there’s ample room, they’re super luxurious and really comfortable,’ Paris said.

The huge cabin chairs transform into beds for added comfort, and tiny lights are embedded into the ceiling to make it appear like the night sky.

They were also given personal care items such as toothbrush, tooth paste, deodorant, towelettes, moisturisers and hand wipes. 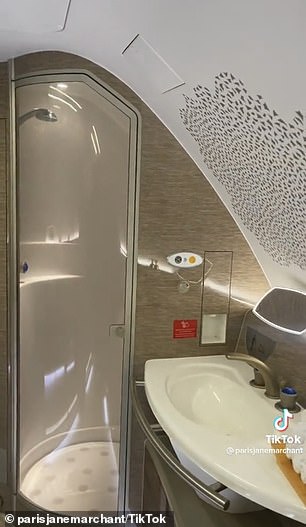 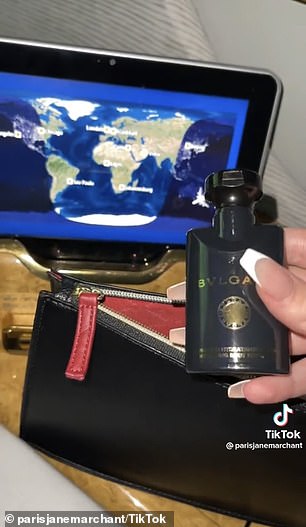 Perhaps the most impressive inclusion on board the flight was the in-build shower and bathroom (left). The pair were also given personal care items such as toothbrush, tooth paste, deodorant, towelettes, moisturisers, hand wipes and perfume (right)

Perhaps the most impressive inclusion on board the flight was the in-build shower and bathroom.

Sounding impressed and excited, Paris said: ‘This is epic; this is a shower in the sky, which you only get on Emirates first class. Absolutely amazing.’

‘The menu was completely on-demand, so whenever you wanted any food you just press a buzzer and they (the staff) would come.’

‘The food was actually SO good and fresh,’ Paris said.

At the stop-over in Dubai the pair ordered sushi and received a complimentary massage in the Emirates lounge before continuing the second leg of the flight and arriving in Paris. 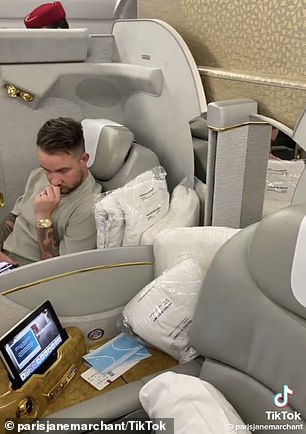 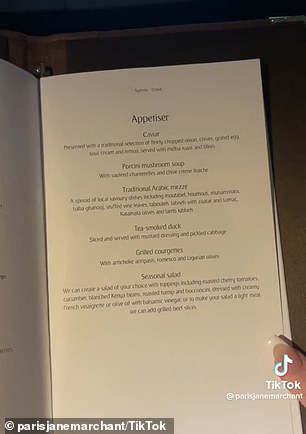 The huge cabin chairs (left) transform into beds for added comfort, and tiny lights are embedded into the ceiling to make it appear like the night sky. Guests can also choose from a lavish menu (right) 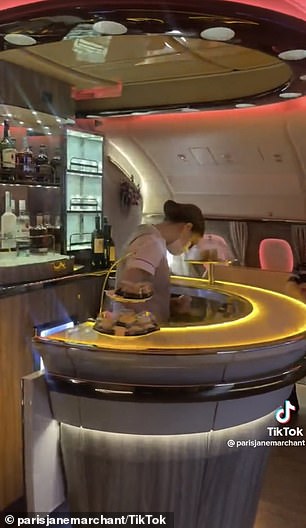 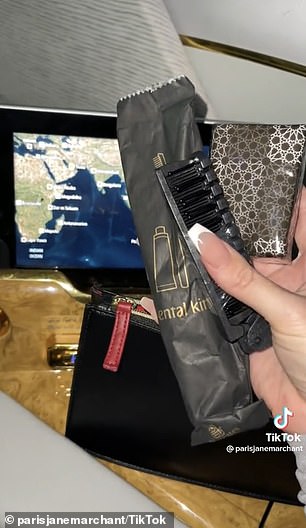 The video was viewed more than 391,000 times and received more than 15,000 ‘likes’, but most TikTok users were in disbelief over the huge cost

What’s included in a first class international flight on Emirates?

Luxury food and beverages to choose from

A chair that can recline all the way back for sleeping

A button to call staff whenever you need

Sliding doors for maximum privacy to your cabin area

A bar to order drinks from

The video was viewed more than 391,000 times and received more than 15,000 ‘likes’ from other TikTok users, but many were in disbelief over the price.

‘At least I get to see this without wasting $20K. Sweet,’ another wrote.

A third said: ‘Strongly recommend not watching this 10 hours before a 16-hour economy flight from Los Angeles to Sydney.’

‘You obviously have worked very hard to be able to afford it, well done,’ another said.

And they have worked hard – Paris and Lawrence are the duo behind online women’s clothing store Generation Outcast Clothing that has even caught the eye of Kylie Jenner.