EXPRESS INFORMER > News & Politics > What is the Collective Bargaining Agreement and what do NRL players really want?

The NRL, the players and the clubs are at loggerheads with negotiations over the forthcoming Collective Bargaining Agreement (CBA) at a standstill.

Earlier this week, Melbourne gun Harry Grant claimed that development players on $60,000 would be ‘better off on the tools’ to highlight the disconnect between the stars and the league at present.

Meanwhile, other reports suggest that Canterbury football boss Phil Gould unleashed at NRL chiefs during a recent event, airing his frustrations at a lack of movement from all parties.

But what is the Collective Bargaining Agreement? What do all the parties want? And is it really just about the money? Daily Mail Australia takes a look at the burning questions amid the latest stand off.

Daily Mail Australia provides everything you need to know about the Collective Bargaining Agreement sage engulfing the NRL, the players and clubs

What is a Collective Bargaining Agreement?

The CBA is a deal between the NRL, the players and the clubs, which details the minimum terms and conditions of the players’ employment as well as important financial arrangements within rugby league.

The CBA also covers a number of factors that are key to the relationships between the NRL, players and clubs and takes into account the interests of all parties.

All parties are currently negotiating a deal that will come into effect in 2023.

Who represents the players?

Former Newcastle Knights star Clint Newton is the chairman of the association and so the American is tasked with striking a deal that is in the interests of the players. 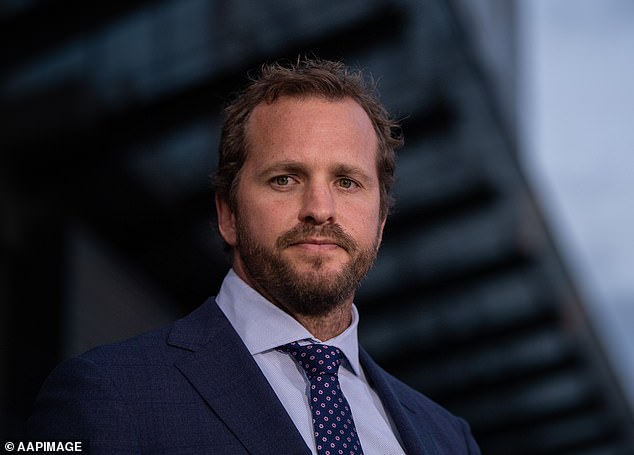 The players are represented by an association (RLPA), which is headed by Clint Newton

What is the NRL offering?

According to The Sydney Morning Herald, the NRL say the players have been offered a package worth $1.32bn over the next five years, the biggest financial proposal in the game’s history.

In a show of transparency, the NRL claims that both clubs and players have been shown a detailed breakdown of the NRL’s finances.

Their offer to the players represents a 40.5 per cent share of consolidated revenue from next year.

In real terms, the NRL insists that each club will have a salary cap of about $12m, up on the $9.18m limit set on clubs. That equates to an average salary of $400,000 a year for each player, although that figure is disputed.

They also stress that they need to take into account financial considerations outside of the men’s game, with grassroots a priority. 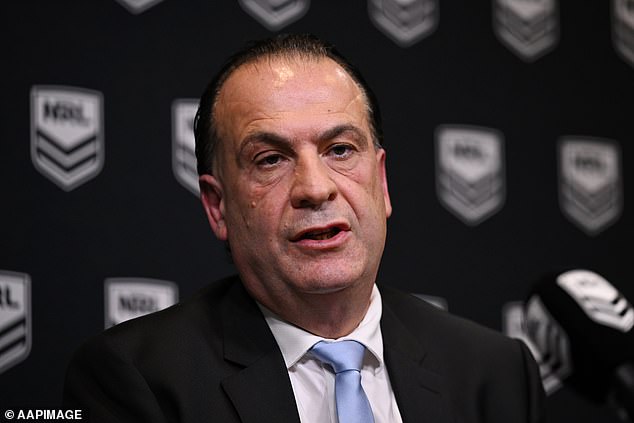 What do the players want?

The players’ union wants a bigger slice of the pie. They’ve asked for their share of consolidated revenue to increase by two per cent on the NRL’s initial 40.5 per cent offer.

The RLPA has also requested only a small jump in the salary cap, instead asking the game to focus on putting money towards hardship and retirement funds in order to support players’ medical costs once they finish their careers of if they become injured and uncontracted.

‘The clear majority of players will not see out the term of this CBA,’ Newton said.

‘This is why the players have a representative body to make responsible decisions and invest in areas that will support them when they leave the game.

‘If we were being greedy we’d want to dump every dollar into the salary cap. Make it $15 to $20 million.

This area of ensuring retiring players are better looked after is something we’re really passionate about. I am a retired player. I’m lucky but I know what it’s like for others. 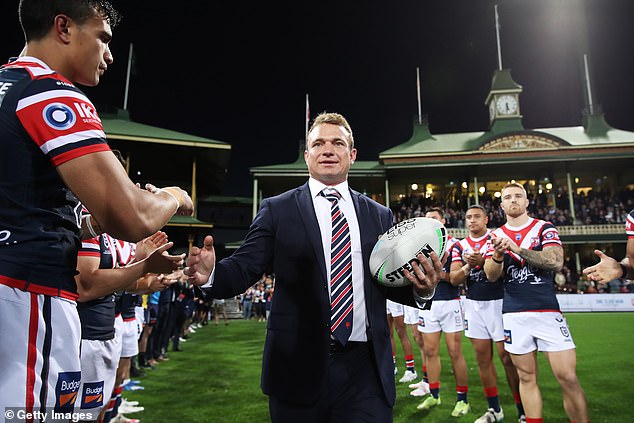 Retired Roosters player Jake Friend walks through a guard of honour prior to the round 11 NRL match between Sydney and the Brisbane Broncos at Sydney Cricket Ground, on May 22, 2021

‘I’ve seen teammates struggle and it’s hard to watch. That’s why every player has agreed to look after these guys rather than put the money into their own wallets. It’s for injury hardship, medical support funds and all sorts of things. They’ve got the rest of their lives to live.’

The union also says it wants to direct most of the salary cap bonus to lower-income players, which would raise the minimum wage to $150,000 a year.

Newton said the RLPA is also calling for more investment in the NRLW.

‘There should be a big increase in the women’s game,’ he said.

‘The commission has to be prepared to prioritise the women and the NRLW clubs. The problem is exacerbated because the broadcast deal does not provide for $1 above production costs for the women’s game. They’ve undervalued our fantastic female athletes.’ 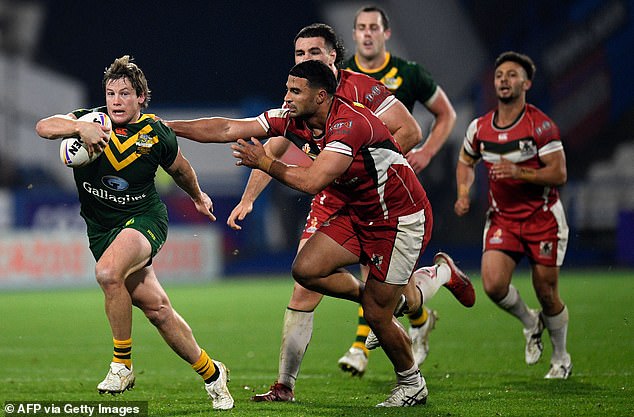 What are the main sticking points?

Well, the RLPA disputes some of the figures quoted by the NRL. They are forecasting a salary cap of $10.5m for men’s teams in 2023, which they claim equates to an average salary of $360,000 per year.

The association also argues that the CBA will have to cover more than 300 extra players due to the introduction of a new NRL team, the Dolphins, as well as four new NRLW teams, meaning that they are actually going backwards – especially when inflation is considered.

They’re not overly convinced with the NRL’s transparency when it comes to its finances during Covid, either. Players agreed to take a pay-cut during the pandemic but the NRL performed better than expected, financially, and agreed that the players were due backpay. The issue has been how much the players should receive.

The NRL initially handed over $11m in backpay in February but there were doubts whether that was a genuine figure. They subsequently increased the figure to $38m in August. 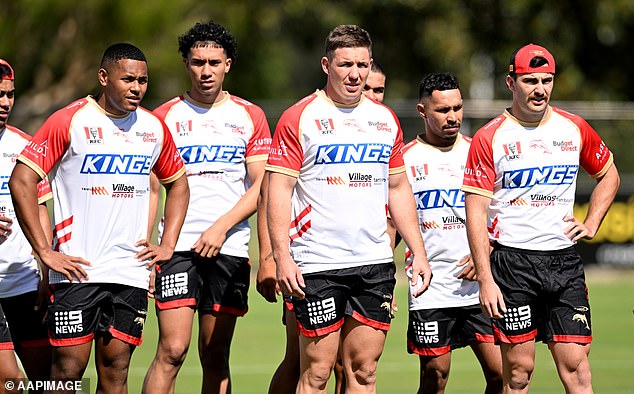 The introduction of a new team, the Dolphins, means the money is spread even further

Elsewhere, the RLPA are also campaigning for the introduction of a match-payment system so that a player can earn $2000, for each top-grade appearance, as well as fees for players who compete in finals games, in a similar manner to State of Origin.

That would mean that a player with over four finals appearances could earn as much as $36,000.

Newton is also far from impressed with ‘confidential information being deliberately and irresponsibly rolled out in the media’, adding that leaks ‘will only push us further apart’.

Newton told the Daily Telegraph that the players are disputing suggestions they were actually getting a 34 per cent increase under the current offer.

‘It looks good at first glance but it’s not. For this CBA you have to add in a new NRL team [40 players] plus 10 extra full-time contracts outside the to 30 at each club to share the money,’ he said,

‘The NRL players are going from $980 million all up to $1.198 billion. That’s a 22 per cent increase, not 34 per cent. You’ve got to take into account the NRL’s consolidated revenue is increasing by 25.15 per cent so the offer isn’t even keeping pace with NRL financial growth.

‘The salary cap is not actually $12.5 million. It’s closer to $10.5 million. They’ve added cars, train and trial players, development players that were previously separate to the cap. It’s very misleading.

‘Do we genuinely believe despite the players and clubs being the main generators of the revenue, that they don’t deserve to track in line with the same percentage share as the previous CBA term? The players have actually taken a discount to fund other areas of the game.’

We’ve heard about the players, but what do the clubs want?

This one is pretty straightforward. The clubs are negotiating for a fixed sum of money they will receive each year on top of the salary cap to cover all expenses besides player payments.

The hard figure they want is $5m. While chiefs from Souths, Canberra and Melbourne had ‘productive’ talks with Andrew Abdo this week, there remains some work to do to strike an agreement.

However, the clubs are understood to be further down the road in negotiations than the players and are more likely to reach an agreement sooner, although they are hesitant to sign off on an agreement until the RLPA strikes a deal. 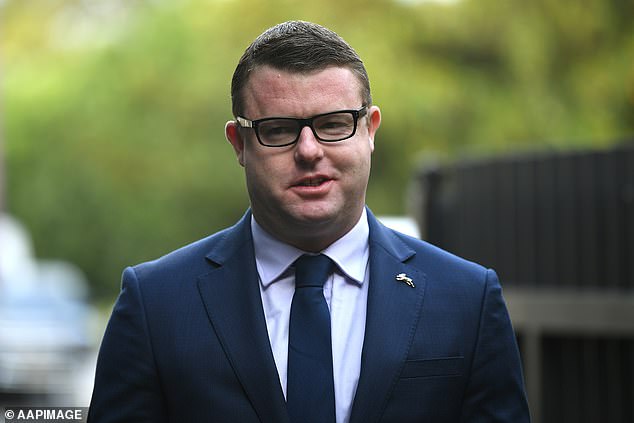 So, it’s just about the money?

Not entirely.  As mentioned before, the CBA covers a wide range of issues and one such sticking point has been the matter of complimentary ticketing.

Players have been told that $22m will be set aside in the CBA for a small allocation of tickets for family and friends at each games.

But the AFL has no such contingent in their employment conditions and typically gift tickets to players as a token of goodwill.

The players also want a greater say in how off-field incidents and behavioural issues are handled.

‘We understand accountability is part of the game and, following due process, if sanctions are required then that will play out,’ Newton said.

‘However, our system is broken and requires urgent attention. A review of our entire integrity process and procedures has been on the table for three years with a full review meant to be finalised. Yet here we are in November 2022 and still nothing to show for it.

‘We are a long way from best practice and we need a mature model based on procedural fairness, and with a clear sanctioning framework so everyone can have trust in the system and have confidence they will be given a fair go.’

When is the deadline?

Well, that’s already passed. The parties were supposed to reach an agreement on October 31, but that has been passed by some distance.

Expect talks to accelerate over the coming days as the New Year fast approaches.