UK billionaire Jeremy Grantham (pictured with wife Hannelore), the co-founder of asset management group GMO, warned that massive government stimulus spending during the pandemic was creating the conditions for an American ‘superbubble’

A bursting of an American ‘superbubble’ would cause Australia’s share market, house prices and super balances to plummet again like they did two years ago – but without a quick recovery.

UK billionaire Jeremy Grantham, the 83-year-old co-founder of asset management group GMO, warned at the weekend that massive ‘inept’ government stimulus spending during the pandemic was creating the conditions for upheaval in the world’s largest economy.

He coined the term ‘superbubble’ to highlight how an imminent crash would be different to the 1929 Wall Street Crash, the Dot-Com bubble of 2000 and the Global Financial Crisis of 2008.

While those asset bubbles were also based on speculation, Mr Grantham said this pandemic crash would be exacerbated by massive government spending inflating asset prices beyond what would have happened otherwise.

‘Today in the U.S. we are in the fourth superbubble of the last hundred years,’ he said

‘This checklist for a superbubble running through its phases is now complete and the wild rumpus can begin at any time.’

Here, Daily Mail Australia takes a look at what would happen should such a super-bubble burst.

With more money available, investors have recently been piling into shares, with prices regardless of earnings continuing to rise despite US inflation hitting a four-decade high of seven per cent in December 2021.

Mr Grantham said a super-bubble continues to swell ‘until, just as you’re beginning to think the thing is completely immortal, it finally, and perhaps a little anticlimactically, keels over and dies.’

‘This is why at the end of the great bubbles it seems as if the confidence termites attack the most speculative and vulnerable first and work their way up, sometimes quite slowly, to the blue chips.’ 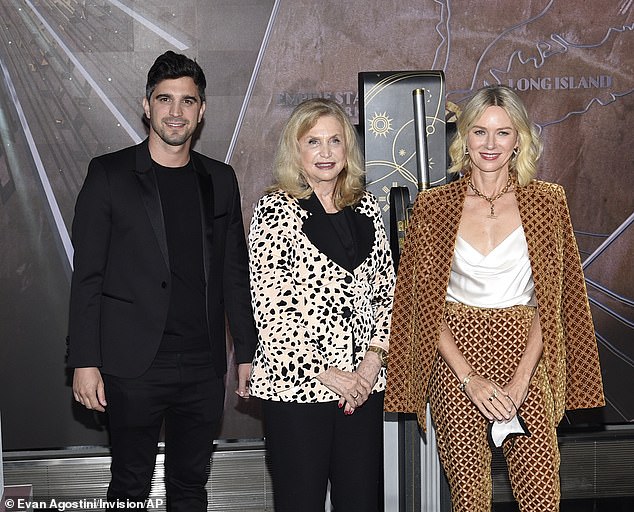 In Australia, pay now, pay later juggernaut Afterpay has seen its share price climb from just $8.90 a share in March 2020, at the start of the pandemic, to peak at $152 in February 2021 to now be worth $66.47. Its share prices has continued to fall since late 2021 (pictured is co-founder Nick Molnar, left, with, actress Naomi Watts, right, and American Democratic Congresswoman Carolyn Maloney)

Causes and signs of a ‘superbubble’

HOUSE PRICE BUBBLE: Prices surge to the point where debt-to-income ratios are unsustainable

There is a long way to fall for some Australian stocks.

At one point a year ago, Afterpay had a bigger market capitalisation than Telstra, an established company with a monopoly on Australia’s copper landline phone connections.

The broader Australian share market’s S&P/ASX200 is 48 per cent higher than it was in March 2020, following a 33 per cent plunge in only a month as the World Health Organisation declared a Covid pandemic.

The market peaked in August but is not too far off those record highs.

In Australia, the Reserve Bank has bought $336billion worth of federal and state government bonds, as part of quantitative easing measures.

Treasury is expecting gross federal government debt to surpass the $1trillon mark by June 2023 for the first time ever, with taxpayers spending more than $300billion on Covid stimulus measures since the pandemic began in March 2020.

A greater supply of money has meant little return on bank deposits.

This has led to more investment in the share market, with tech stocks in particular surging before plunging.

‘The final feature of the great superbubbles has been a sustained narrowing of the market and unique underperformance of speculative stocks, many of which fall as the blue chip market rises,’ Mr Granthan said.

So far in 2022, the Australian share market is down 3.6 per cent compared with 7.7 per cent in the US, based on the broader S&P 500 index, a CommSec analysis showed.

The Australian market is more exposed to mining than tech stocks than the US.

Superannuation in danger too

Should an American ‘superbubble’ burst, business confidence would diminish, making firms more reluctant to borrow and banks even more averse to lending like they were during the Global Financial Crisis.

But in 2020, super balances went up by 3.3 per cent despite the national Covid lockdowns, thanks to more than $300billion worth of Australian government stimulus spending.

Instead of falling, super returns rose albeit at half the two-decade average of 6.6 per cent.

Even more troubling, Mr Grantham noted the US was in the midst of its own housing superbubble.

He noted US home borrowers had a price-to-income ratio of 5.5, which while high and dangerous was less severe than Australia.

‘Although the U.S. housing market is selling at a high multiple of family income, it is less, sometimes far less, than many other countries, e.g., Canada, Australia, the U.K., and especially China,’ Mr Grantham said. 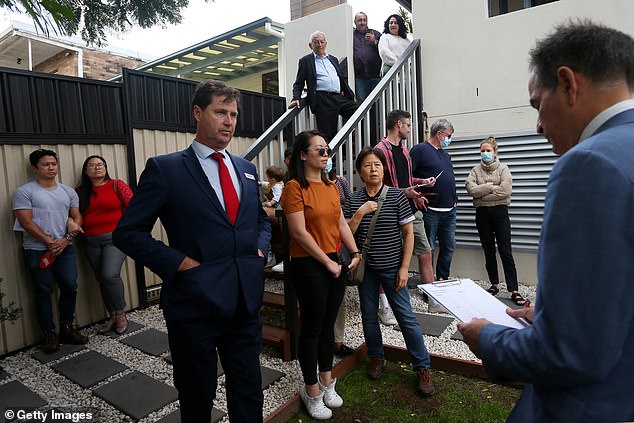 Last year, Australia’s median property price for houses and apartments together rose by 22.1 per cent to $709,803, with the CoreLogic data showing the fastest calendar year increase since 1989 (pictured is an auction at Hurlstone Park in Sydney’s inner west)

A fall in American property prices would see price-to-income ratios fall back to four per cent, which is ‘well above any levels prior to the mid-2000s housing bubble’.

In Australia, the debt-to-income ratio for a median-price house is much higher, being at a level the banking regulator considers to be dangerous.

Last year, Australia’s median property price for houses and apartments together rose by 22.1 per cent to $709,803, with the CoreLogic data showing the fastest calendar year increase since 1989.

Property prices rose at ten times the pace of wages, which went up by 2.2 per cent in the year to September, Australian Bureau of Statistics data showed.

The Australian Prudential Regulation Authority considers a debt-to-income ratio of six or more to be dangerous for an individual or a couple paying off a loan.

In 2008, Australian superannuation balances plunged by 19.7 per cent. But in 2020, super balances went up by 3.3 per cent despite the national Covid lockdowns, thanks to more than $300billion worth of Australian government stimulus spending

Australia is also particularly vulnerable to a Chinese real estate downturn, with Evergrande on the verge of collapse, having effectively defaulted on its $400billion worth of debt.

A property market slowdown in China would affect its demand for iron ore, Australia’s biggest export, with Mr Granthan fearing the property contagion. 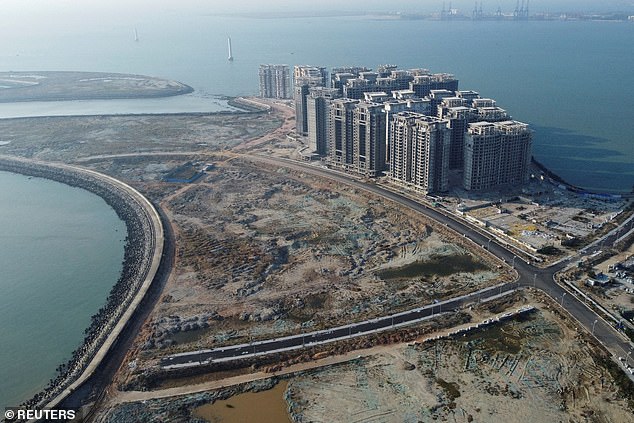 Australia’s is also particularly vulnerable to a Chinese real estate downturn, with Evergrande on the verge of collapse, having effectively defaulted on its $400billion worth of debt (pictured are 39 buildings Evergrande developed that are slated for demolition at Danzhou in the Hainan province)

‘In China, real estate has played an unusually important and unique role in the extended boom and thereby poses an equally unique risk to the economy and hence the rest of the world if its real estate market loses air exactly as it appears to be doing as we sit,’ he said.

Record-low interest rates, at levels close to zero, have created ‘the vampire phase of the bull market’ where not even high inflation in the world’s biggest economy can initially stop a surge in asset prices.

In both the US and Australia, the Federal Reserve and the Reserve Bank have engaged in quantitative easing where they have bought government debt to pump money into the financial system.

‘One of the main reasons I deplore superbubbles – and resent the Fed and other financial authorities for allowing and facilitating them – is the underrecognized damage that bubbles cause as they deflate and mark down our wealth,’ Mr Grantham said in a research paper.